The latest step in Australian manufacturer Kogan’s
bid to become a major force in the UK’s budget TV market is one of its
most eye-catching yet. For the KULED22DVD combines a 22-inch edge LED
screen with a built-in DVD player for under £130 – a second-room bargain
of huge proportions provided, of course, there’s some quality to go
with the price. 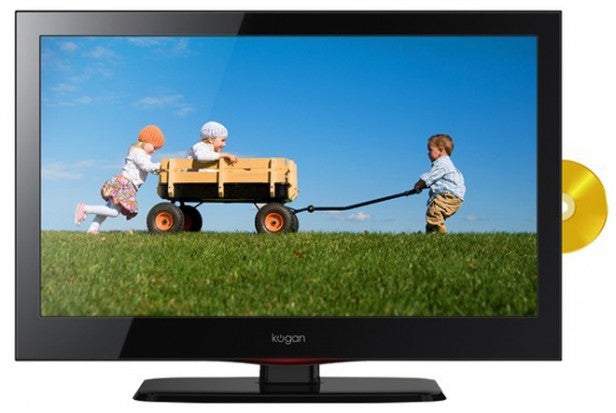 You
do kind of get what you pay for – at least aesthetically – with the
KULED22, though. Its bezel is both extremely plasticky and much
wider than we’re used to seeing on modern TVs. The little blue or red
on/standby light under the Kogan logo adds a dash of style, but overall
the KULED22 is a budget TV and not a TV for the style conscious.

The KULED22’s connections are fair. The RF input feeds a standard definition Freeview tuner,
there’s a USB port you can use for playing back a few video, photo and
music files, or for recording from the Freeview tuner. Rounding things off are a D-Sub PC
port and two HDMI connections.

Features of note – aside from
those we’ve already mentioned – are few and far between. The only
interesting things to be found within the TV’s on-screen menus are a noise-reduction system
and a degree of colour management.

The on-screen menus are drab
and not all that easy to read thanks to the spidery text. The remote control, meanwhile, is just about the most lightweight, plasticky thing we’ve
ever handled.

It’s
all a bit hit and miss so far, and this continues with the
KULED22’s picture performance. Pictures are brighter than
might be expected of such a cheap TV, enabling the set to sit
handily in kitchens and conservatories as well as traditionally
darker second-TV environments like studies and bedrooms. What’s
more, this brightness hasn’t been delivered at the expense of all traces
of black level response.

Watching a few
dark movie scenes via the built-in DVD player reveals black colours that
don’t look as washed out and misty as they would normally do on other TVs around the same price. These respectable blacks can be accompanied in
the same frame by potent colours and whites, too. In other words, the
edge LED system isn’t having to remove vast quantities of brightness
from pictures during dark scenes in order to make black colours look
respectable.

To be clear, we’re not talking about the sort of
black level depths you’d get from a premium TV. There’s still a
residual bluish or greenish undertone too. You should also reduce the set’s
brightness a little if you want to stop dark scenes from having a rather
noisy, ‘glowy’ look and suffering a thin line of backlight
inconsistency around their extremities. 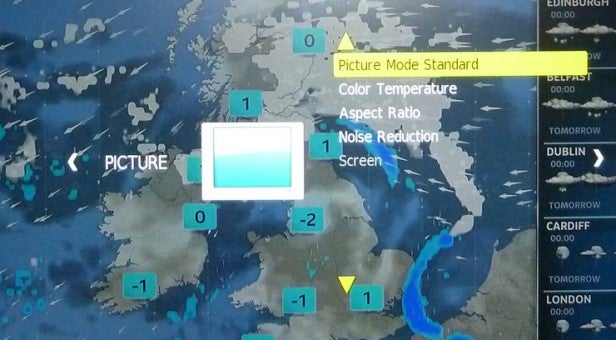 With high definition content the KULED22 delivers a solid stab at fine detail reproduction, and
it’s good to find that motion isn’t the blurry mess it might have been.
There is some resolution loss with moving objects, but things never
break down into full-on smearing.

The KULED22 has a fairly
significant weakness, though: its colour handling. For despite the set
providing a degree of colour management, we really struggled to get its
colours looking very convincing at all. That’s primarily because colours lack subtlety in
their blends and tend to look unbalanced (with greens and oranges
over-strong, especially with skin tones), appearing either painfully
over-saturated or muted and flat, depending on your settings. The
green/blue undertones visible during dark scenes also don’t do colour accuracy
any favours.

We’re not, to be clear, just obsessing about colour
accuracy from a high-end AV
enthusiast’s point of view. Anyone who’s owned a TV before will appreciate
that this Kogan’s tones are seldom believable. You kind of become
attuned to the odd palette over time, but even then there are still
times where the colours look so weird they can’t help but distract you
from what you’re watching.

Another
smaller issue finds very bright parts of the picture looking bleached
out, as the screen fails to resolve subtle picture information at this
extreme end of the spectrum. 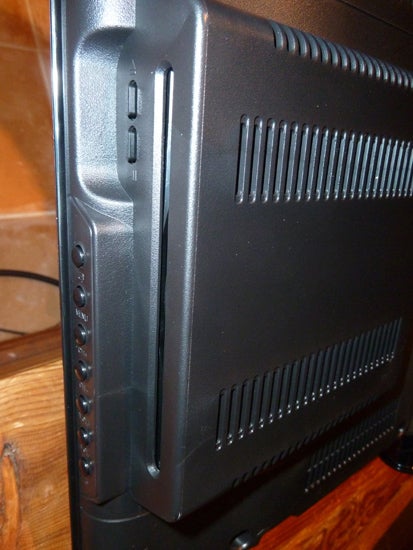 The
KULED22’s audio performance is pretty average. There’s minimal bass, voices tend to
sound thin, music sounds warbly, and action scenes routinely distort.
Which is, of course, entirely par for the course at the cheap end of the
TV market.

Final niggles concern the configuration of the DVD
slot on the TV’s rear. First, this will only take a disc if you’ve first
selected the DVD input, rather than the TV just automatically grabbing a
disc and switching to DVD playback when you introduce a DVD to the
slot. Second, bizarrely you have to insert discs with their printed
sides facing the rear of the TV, which is so counter-intuitive it’s
enough to make you think Kogan has just stuck the DVD player in the
wrong way round by mistake!

If you’re after
an ultra-affordable small-screen TV with a built-in DVD player, the
KULED22 fits the bill adequately. That said, its rather basic approach to
colours provides you with a good excuse to spend a bit more elsewhere if
you possibly can.