One of the surprising things about the Kogan Agora, given it’s low price, is that it packs in a dual-core 1Ghz processor, whereas a lot of today’s budget Android phones still rely on single-core chips. Its RAM is a bit limited at 512MB, rather than the 1GB that many mid-range devices now have, although that’s pretty standard on a lot of budget mobiles at present. 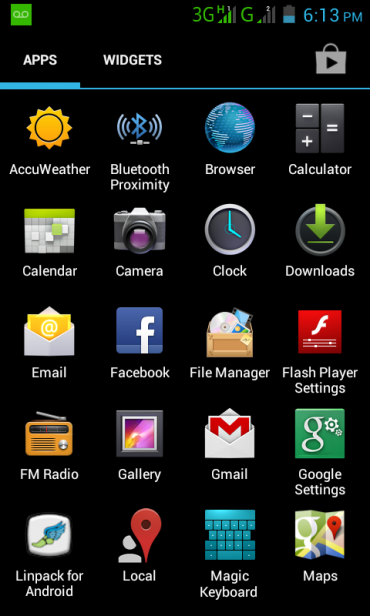 Unfortunately the Agora is saddled with the older Ice Cream Sandwich (ICS) version of Android rather than the newer Jelly Bean release. Jelly Bean is much smoother to use than ICS thanks to the ‘Project Butter’ enhancements Google made to the user interface. As a result the Agora does suffer from the same stutters and pauses that afflict pretty much all ICS phones. However, by budget standards it also feels quite nippy and this was was backed up by its reasonably good benchmark results.

For example, in the Linpack test it managed to hit 60.541MFlops compared to the ZTE Blade’s 25.092 MFlops, while in Geekbench 2 it scored 886 which is much better than the Blade III’s result of 436. It’s not massively fast for 3D gaming though, as it only managed to hit 24fps in the GLBenchmark Egyptian Standard test. 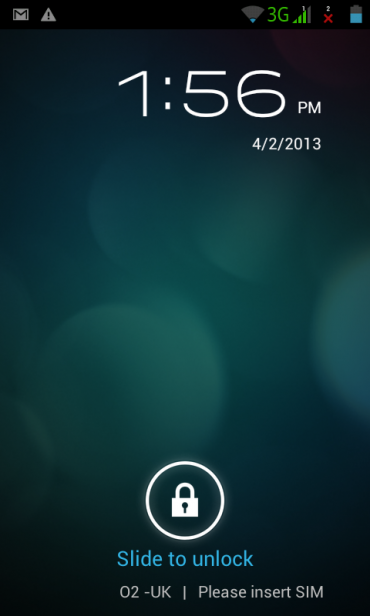 Kogan has made almost no changes to the standard Android UI, so what you get is largely plain vanilla Android, which is no bad thing in our book. There’s a scrollable line of quick access buttons in the notifications tab for stuff like turning Wi-Fi on and off, controlling auto-rotation of the screen and turning on Airplane mode. Kogan has also added an Accuweather widget, as well as a File Manager app and an app dedicated to controlling the built-in FM Tuner, but that’s pretty much your lot.

Along with the big screen, the other interesting thing about the Agora is the fact that it has two SIM card slots. This means you can keep, say, work and personal SIMs in the phone at the same time and switch between them as you want. There’s a dedicated settings menu for controlling the use of the SIMs, so you can choose which to use for voice or data. 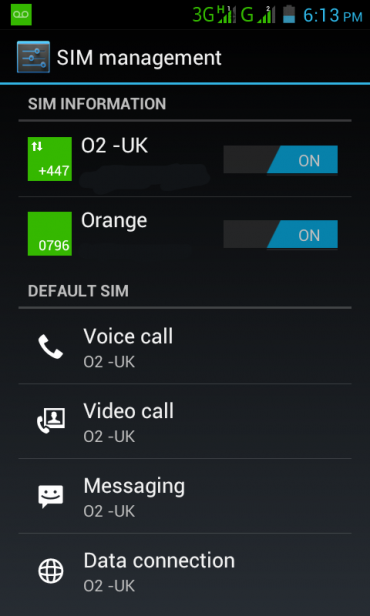 There are a couple of issues to be aware of though. Only one of the SIM slots is enabled for 3G, so you can’t really split a data allowance between two SIMs without physically swapping them around. Also, if you’ve only got one SIM card in the phone there seems to be no way to turn off the alert notification that constantly and annoyingly sits in the notifications tab to tell you that one of the SIM slots is empty. 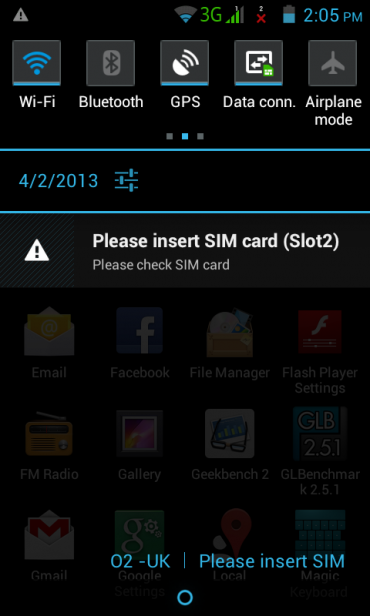 Apart from the dual SIM functionality, the contacts book is the standard Android one. It’s easy to use, with a fast search function and offers the handy ability to combine contacts into groups such as Family, Friends and Coworkers. Photos are also transferred automatically from your Google contacts onto the phone.

We had no problem with call quality during our time with the phone as the earpiece delivers pretty loud and clear audio, while the mic also seemed to do a good job of keeping speech sounding intelligible.

The Agora uses the standard Google browser that’s included with the ICS version of Android. It’s quick and easy to use, supports tabs so you can quickly jump between different open pages, and is smooth for zooming and scrolling.

In Browsermark V2.0 the Agora clocked up a score of 1499 (higher is better), while it completed Sunspider in 2219.9msms (lower is better). Both of those compare very favourably against ZTE’s Blade III, which scored 962 in Browsermark, but was slower in the Sunspider test, only completing it in 2679.8ms.