It goes without saying that the 32XXXYA is a straightforward 50Hz panel with no significant motion processing, and resolution junkies should also note that its native resolution is 1366×768 rather than 1920×1080 full HD.

By far the TV’s most aggravating missing feature, though, is any way of turning off its overscanning. This means that as well as full HD sources having to be downscaled to fit the screen’s native 1366×768 resolution, they’ll also have their outer edges pushed off the screen. The 32XXXYA is the first TV we’ve seen in an age that doesn’t let you turn overscanning off.

Despite our concerns, though, first impressions of the 32XXXYA in action are actually promising. Our initial test material was a succession of HD daytime TV shows, with their preference for bright, colourful sets and artificial lighting. And in all cases pictures surpassed our expectations. 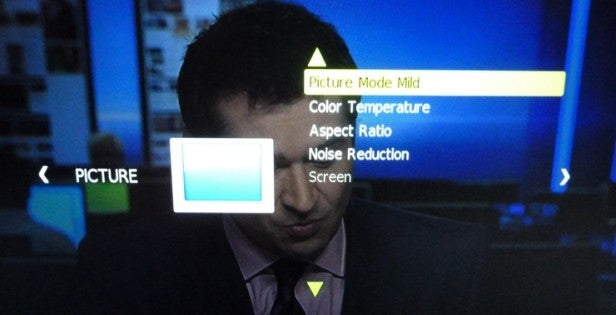 The first surprise is that colours are quite punchy, leaping off the screen rather than seeming to recede into it like they sometimes do with very cheap TVs. It has to be said that colours look a little unbalanced, with reds and blues seeming a bit over stressed, and some skin tones looking a bit orangey. The colour range is limited too, and subtle colour differentials tend to get lost in blooming’ over the richest saturations. But while this obviously doesn’t exactly add up to a ringing endorsement of the 32XXXYA’s colour skills, we’d expect to find all these problems and more operating on a far worse level on other similarly affordable 32in TVs.

The same ‘decent for its money’ situation applies to the 32XXXYA’s sharpness. For while the set’s lack of colour subtlety, non-full HD resolution and undefeatable overscanning prevents HD pictures from looking as pin sharp as they certainly could on more expensive sets, there’s not as much blurring when showing motion as might have been expected from such a cheap panel. As a result, HD pictures are certainly always distinguishable from standard definition ones, even when you’re watching action scenes.

The 32XXXYA’s fairly strong showing so far, though, comes a cropper with its handling of dark scenes. First, the sense of blackness isn’t very convincing, as you feel constantly aware of the ‘glow’ of the LED lighting even in the darkest parts of images. The lack of a dynamic contrast system certainly doesn’t help in this respect.

Used as the main TV for the review period
Tested for more than a week
Tested using industry calibrated tools, discs and with real world use
Tested with broadcast content (HD/SD), video streams and demo discs
Previous
Kogan KULED32XXXYA Review Next
Conclusions Review