With people adding more LCD TVs into second rooms and times being as hard as they are, it’s not surprising that we’re seeing a sharp rise in the number of self-consciously ‘budget’ TV brands emerging in the UK. What is perhaps surprising, though, is that as one or two recent reviews of Finlux TVs have shown, some of these cheap TVs can be as cheerful as they are cheap.

With this in mind, over the next few days we’re going to be looking at a trio of budget models from lesser known brands – kicking off today with the 32XXXYA from Australian brand Kogan. This is a 32in LED TV that can currently be yours for the astonishing sum of £189. Zoinks.

To some extent you have to say it looks its price. Its bezel is huge by today’s super-slim standards, and while its black finish is ultra-glossy, the build quality looks and feels rather plasticky. We do, though, like the Kogan logo, so far as logos go!

Connection-wise the 32 is adequate for its money. Highlights are two HDMIs (v1.3 affairs, as this TV unsurprisingly doesn’t carry 3D support), a Freeview (not HD) tuner, and a USB port through which you can play video, photo and music files. The range of formats supported isn’t as expansive as you might expect from more expensive brands, but frankly any level of multimedia support could be considered a bonus on a sub-£200 32in TV. 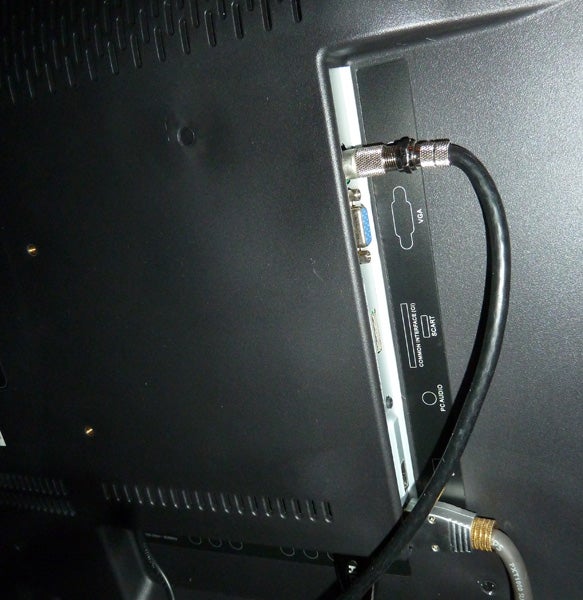 Not surprisingly other features are decidedly thin on the ground. Buttons on the small, plasticky remote control provide are limited to the absolute TV operation essentials aside from a Freeze picture key (woo), while the onscreen menus are as sparsely populated as they are unattractive. The only things of even slight interest are a simple noise reduction system, a handful of picture presets, and a basic colour adjustment system where you can adjust the relative saturations of the red, blue and green elements.

Otherwise picture tweaks are restricted to the usual contrast/colour/brightness/sharpness tools found on pretty much every TV since time began. Particularly notable by their absence are any sort of dynamic contrast system (whereby the TV might boost black level response by constantly adjusting its light output in response to changes in the image content) and a backlight adjustment. We routinely find backlight adjustments invaluable in trying to calibrate LED TVs to deliver good contrast performances, so not having one here obviously raises concerns about how much we’ll be able to improve things if we find any problems with the TV’s presets.

Used as the main TV for the review period
Tested for more than a week
Tested using industry calibrated tools, discs and with real world use
Tested with broadcast content (HD/SD), video streams and demo discs
Next
Picture Performance Review