Camcorders aimed at the YouTube generation are now arriving thick and fast. Defining the genre was the Flip Video Ultra, but we actually saw Creative’s Vado first, here in the UK. Now Kodak is jumping on the bandwagon and raising the bar at the same time.


Not only does the new Zi6 have a built-in full-sized USB port that pops out at the press of a button, it also shoots 720p video rather than the 640 x 480 resolution used by other contenders in this camcorder subgenre thus far. 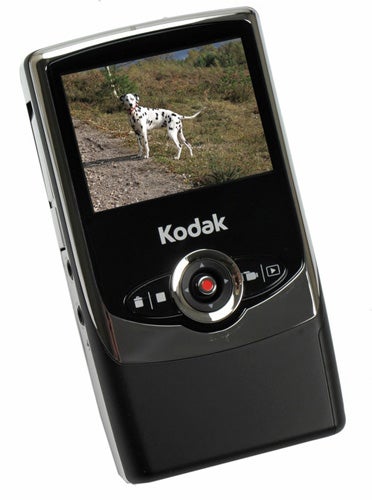 As if to signal its higher quality aspirations, the Zi6 is noticeably larger than the Flip Video Ultra or Vado. But it also feels very solid, and houses a 2.4in LCD – much wider than its competitors. After all, when shooting in 720p High Definition, you will want to see at least some of the detail as you record. 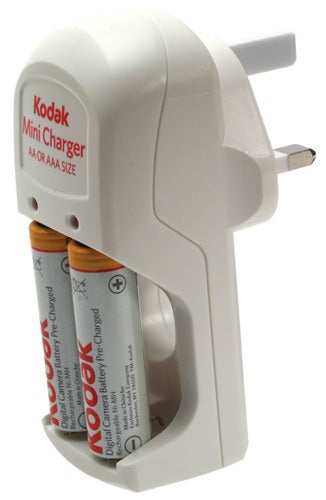 The Zi6 runs on a pair of AA batteries, but Kodak supplies two of its own Ni-MH cells in the box and a standalone charger, giving you the best of both worlds. You don’t need to keep buying new batteries (unlike the Flip Video Ultra), but if you do run out of power when out and about, you can get some more cells virtually anywhere (unlike the Creative Vado).


A 1/4.5in CMOS with 1.6-megapixels captures the images, but the lens is a fixed unit. So whilst a 2x zoom facility is provided, this works digitally, and therefore reduces resolution when in use. Video is recorded as an H.264-encoded MOV file, with three quality modes available. There are two 720p options available – 30 frames per second, and the much publicised 60 frames per second. For more direct YouTube compatibility, however, there’s a VGA mode as well which operates at 640 x 480 and 30 frames per second. 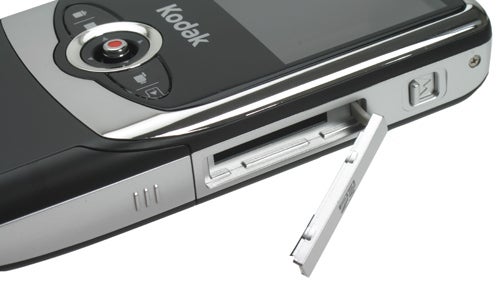 However, just 128MB of flash memory is integrated internally, which is only enough for 20-30 seconds of footage in the two HD modes, and less than two minutes in VGA quality. It’s clearly there just so you can get a taste, as an SDHC slot is also provided, although the cover for this is rather flimsy. A 4GB card will be enough for an hour of footage even at the top 720p60 setting, and nearly six hours of VGA shooting.

As with other YouTube-oriented camcorders, the Zi6 is not exactly jam-packed with features. You won’t be able to attach any external peripherals, as there is no accessory shoe (nor room for one), and no audio input either, although a tripod mount is available. There are no manual settings to worry about, either. The joystick on the back simply works the digital zoom and toggles between the recording modes. The photo mode is also found amongst these, offering 3-megapixel stills (using interpolation), equating to a resolution of 2,048 x 1,536. 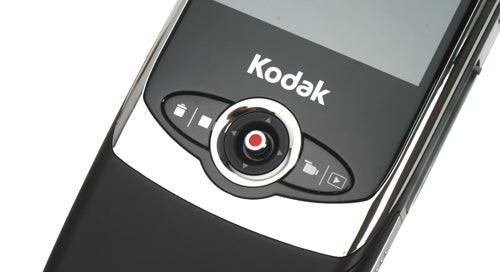 However, like the video modes, there are absolutely no settings available other than the digital zoom – not even different quality levels. In fact, the only manual setting is the switch that swaps between tele and macro options, physically moving the lens. The macro mode works quite well, allowing focus on objects just a few centimetres away – handy for recording the antics of your local flea circus. 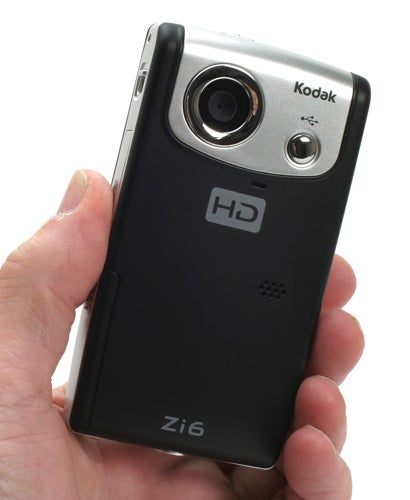 The Kodak’s main differentiation with others in its class is therefore simply the HD video quality. Unfortunately, although it has plenty of detail on its side, the Zi6 tends to shoot very yellow footage in very bright conditions, which wasn’t a problem with the Flip or Vado. It fares much better in more moderate, but otherwise decent lighting. So in everyday conditions its footage will be quite pleasing, and on average will achieve better results than its competitors. 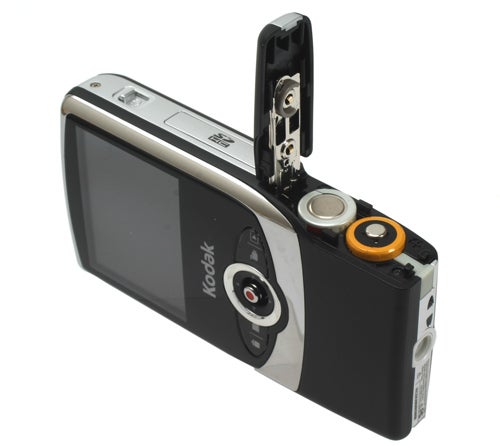 In reasonable artificial illumination, the Zi6 also picks up decent colour. The level of grain is greater in HD60 mode, however, probably because the shutter is limited to a minimum of 1/60th in this mode, whereas it can drop to 1/30th when shooting 30 frames per second HD. In even worse light, the Zi6 produces quite dark footage, with some pronounced compression artefacts, but there is still a decent amount of colour information. 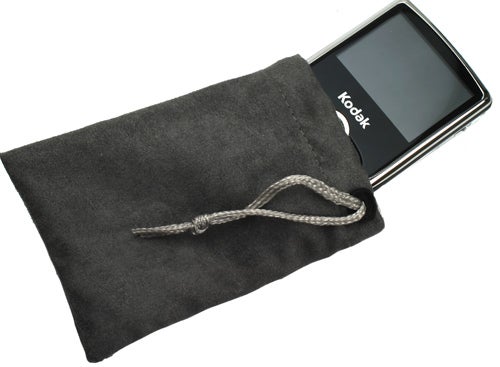 So, overall, if you’re not a camcorder enthusiast you will probably be perfectly happy with the quality of the Zi6’s footage. Its photography abilities, however, are marred by the lack of a flash. Results are acceptable in good light, but in low light the shutter speed is set so low it’s virtually impossible to get a non-blurry shot – something with which iPhone users will surely sympathise.

However, this new genre of camcorder is not so much about video quality as it is about ease of use and ability to put clips online with the minimum of fuss. Like the Flip and Vado, the Kodak Zi6 comes with its own software onboard, in this case ArcSoft MediaImpression for Kodak, version 1.2. When you first plug the device into a PC, the auto-execution routine will load its software on the system. 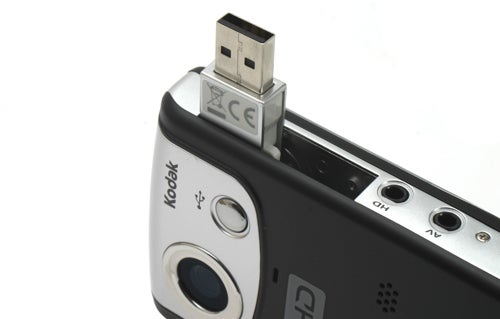 Once MediaImpression is installed, plugging in the Zi6 calls up a splash screen giving you the option to Browse the contents of your camcorder, Import them to a local hard disk, plus of course direct upload to YouTube. With the latter, an Explorer-style interface lets you choose a video, then you simply type in your login and password, followed by the usual title, description and tagging information, then up the file goes.

Kodak also supplies a CD containing a version of MediaImpression with more features. In particular, this version adds the ability to perform some mild editing, but only ordering clips, adding transitions, opening and closing titles, plus a soundtrack. The results can then be exported as a file or even burnt to DVD. It can also convert files for devices like the iPod and PSP, or send Video Email. 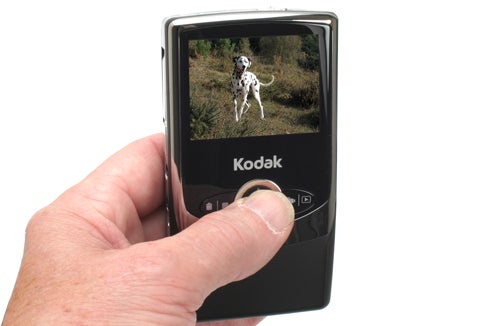 Unfortunately, the MOV files created by the Kodak, whilst Mac-friendly, are not universally supported by PC video editing apps. Pinnacle Studio 12 Plus wouldn’t recognise them, although Adobe Premiere Elements 7, CyberLink PowerDirector and Ulead VideoStudio 11 Plus had no problems. If you just want to watch your footage, there are twin minijacks and cables supplied for composite and component analogue video, with RCA audio also included on the composite cable. 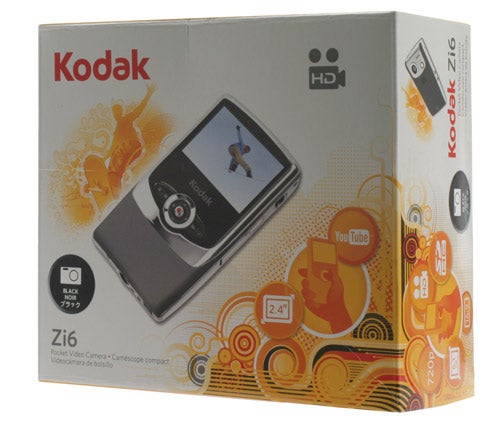 
The Kodak Zi6 does up the ante for video quality amongst YouTube-oriented camcorders, at least in the majority of lighting conditions. But the question is, if you’re aiming at YouTube, do you need HD anyway? Fortunately, you don’t pay much of a premium for it over the Flip or Vado, although you will need to shell out for an SDHC card straight away. For simple capturing of family moments, however, the Zi6 does a competent job. So if you’re not just shooting for YouTube, the extra resolution swings things in its favour over the competition, although video hobbyists need not apply.