What is the Kodak Verité 55?

When Kodak first entered the inkjet all-in-one market, many people said it had arrived too late. However, with a combination of good print quality and low running costs, the company quickly carved itself a niche.

It was a surprise, then, when the company closed its printer division a couple of years ago. Here, under its new owner, Funai, the marque reappears with an inexpensive all-in-one called the Verité 55.

The printer has conventional lines, with an all-black case and a fold-over rear paper support which, when folded back, takes up to 60 sheets. Paper feeds through to an output tray which folds down and flips forward from the front cover.

The flatbed scanner has a simple cover, with no Automatic Document Feeder, and to the right of this sits the control panel. This uses a number of membrane switches for control and has a four-line, paper-white display, which is easy to read, but a bit rudimentary.

Cleverly, this whole control panel hinges up to reveal the twin head and ink cartridges, one black and the other tri-colour. These release easily for changing, making the Verité 55 one of the simplest, low-cost all-in-ones to service. 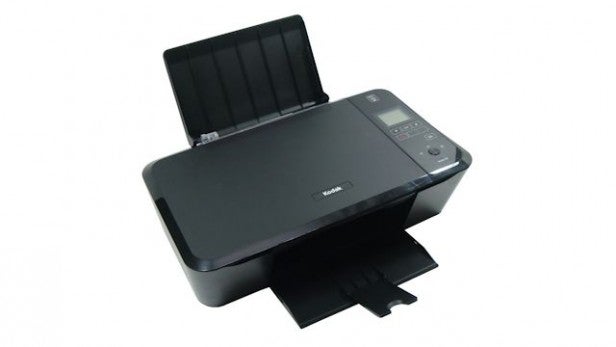 Unusually, XL cartridges are supplied with the printer as standard, and there’s an XXL version of the black cartridge, which can give you up to 600 pages between changes.

The printer has a single USB socket at the back, but the wireless connection is much more versatile, giving access to PCs, tablets or smartphones, under Windows, Android or iOS, with quick connection via NFC.

With an NFC-enabled mobile device, connection simply is nothing more than a tap of it on the Verité ‘s top cover, behind the display, to connect.

The Kodak apps designed for Android and iOS include a quick “flick to print” gesture to send a photo or document to the Verité 55.

Kodak rates the Verité 55 at 10ppm mono and 4ppm colour. We saw 6.3ppm on our five-page, black print test, which rose to 7.4ppm on the 20-page long document. These are both reasonable speeds for this class of printer, although not quite up to spec.

Colour print is also
somewhat below the claimed speeds, with our five-page test returning
2.3ppm – again, though, this is similar to the speeds of its main rivals.

Print quality is similar to earlier Kodak machines, with sharp, clean black text and clear, bright colours in business graphics. Photos came through a little dark, with some shadow detail lost, but a colour copy on plain paper produced some of the closest colours we’ve seen, in comparison to an original.

Since only Tesco currently sells the full range of cartridges for the machine, there’s little competition over price. Even so, with the XXL black cartridge and the XL colour units, and with Tesco’s current three for two offer, we calculate a mono page cost of 3p and a colour cost of 5.9p, each including 0.7p for paper.

These are about the same as for Canon’s £45 PIXMA MX475 and a good 1-2p cheaper than HP’s £60 Officejet 2620, both direct rivals to this machine. This makes it a competitive buy, in terms of running costs. 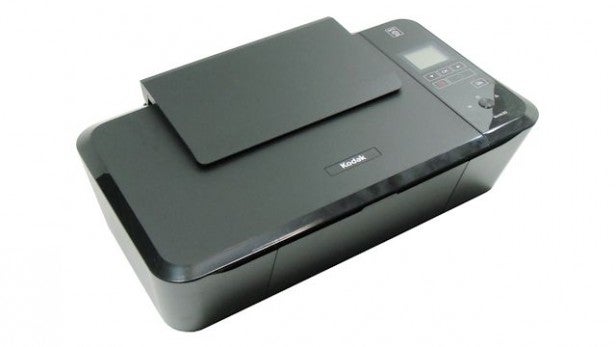 Should I buy a Kodak Verité 55?

The printer has already dropped in price since its exclusive launch through Tesco and there are rumours of a further price cut. At its current price of £59, it comes up against printers such as Canon’s £45 PIXMA MX475 and HP’s £60 Officejet 2620.

Both these machines include ADFs, for scanning multi-page documents, and fax facilities – although the HP has no wireless connection and the Canon has a simple, two-line LCD. Neither has NFC connection for mobile devices, nor the ease of cartridge access that the Kodak machine offers.

The Verité 55 is a welcome return to the UK market for the Kodak brand. The Verité 55 offers good output quality, reasonable running costs and the convenience of NFC connection and easy cartridge replacement. It would be good to see duplex print included in the spec, however.