If your idea of a scanner is an A4 flatbed for transferring old photo prints, the ScanStation 500 will come as something of a surprise. It’s intended for business rather than home use and isn’t even designed to be connected to a PC. Instead, you connect one scanner to your network and just about anybody can use it, for a variety of different tasks. 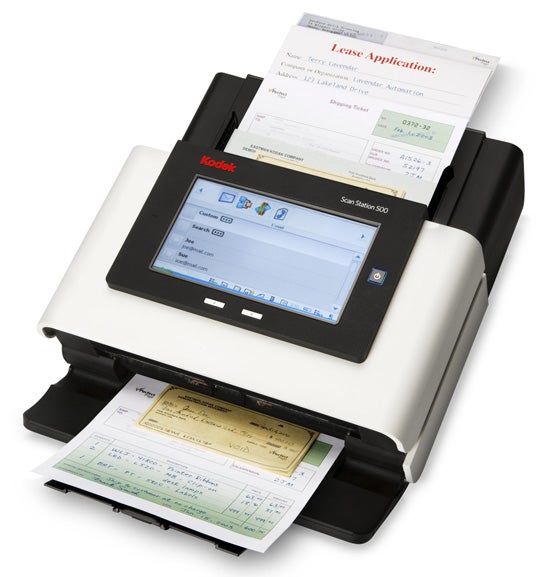 As the name implies, the ScanStation sits at a convenient place in your office and provides scanning facilities for anybody who needs them. The device connects via a standard Ethernet socket at the back and uses an Intel Atom processor with 1GB memory; a respectable hardware spec for a netbook.


Perhaps the ScanStation’s most noticeable feature is its full-colour touch screen. This has a full 200mm diagonal and is used for nearly all controls on the scanner. The screen is adequately sensitive and the buttons and selections are big enough to make it hard to mis-key.


The scanner is angled down from back to front, so papers to be scanned sit easily in the feed tray at the rear. Before you can scan, though, you have to pull out two extensions, fold down the front cover and flip open a three-stage output tray, which is a bit flimsy – don’t let it overhang the front of a desk. 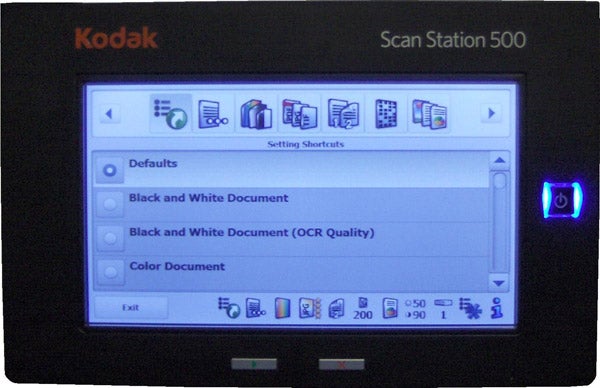 There are four USB sockets, all at the back of the machine. Since so much of the Scan Station 500’s operation is based on USB drives – see later – it would be a really good idea to have them set into the sloping front face of the machine. In fact, there is a fifth socket, set into the top of the touch screen surround, but this is still fairly well hidden.


We find it hard to believe the four rear USBs will be used much at all, as with the feed trays extended, they are all hidden and you have to get at the back of the machine to align and plug in any device. There’s a modem socket at the back, too, as the scanner can be used to send faxes directly, as well as sending to a specified network printer or a folder on a designated PC.

Setup is more than a little unusual. Rather than a member of your IT staff coming along, entering a pass code and setting up the ScanStation 500 from the touch screen, you have to start with the supplied configuration software. Run this on any PC on the network the scanner is attached to and you can produce configuration files for it. Each person is given a configuration file on a USB stick, so that when they plug in, the scanner knows which is their home folder for saving scans, what their preferred scan settings are and what permissions they hold.


A system administrator needs first to set up his own configuration, save it to a USB drive and plug that into the scanner. The Scan Station 500 then asks if you want to overwrite the blank configuration it has by default, and automatically looks for an IP address from your network’s DHCP server. Once it has established itself, it can send scanned documents to the folder set for you in the configuration. It can also scan to the USB drive, if company security policies permit. At switch-on, the scanner plays a little country and western riff, which it reinvents at switch off. This, and the system of USB drives, seems to suggest Kodak has a sense of humour. 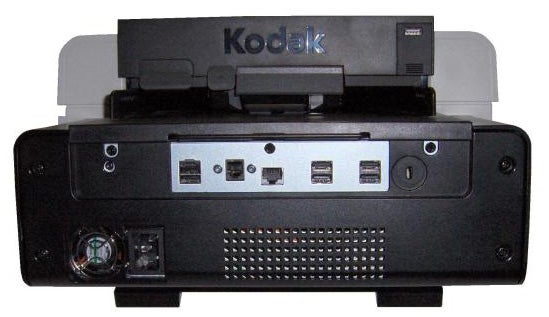 The scanner itself can scan one or both sides of a document in a single pass, as it has twin heads, positioned over and under the paper path. We tested it with a 20-page document of assorted black and colour pages, with seven of them double-sided. The scanner can produce electronic documents as tif, jpg, pdf or wav files. That last one isn’t a mis-print, as you can add voice attachments to scanned files, explaining what they are.


Scan resolution can be set to anything between 75dpi and 600dpi and the scanner automatically deskews and crops, as well as detecting blank pages and multi-feeds. It read out test job in 43 seconds, giving it a duplex scanning speed of around 38 sides per minute; not at all a bad speed. The scanner feeds sheets from the bottom of the stack, so page order is maintained. 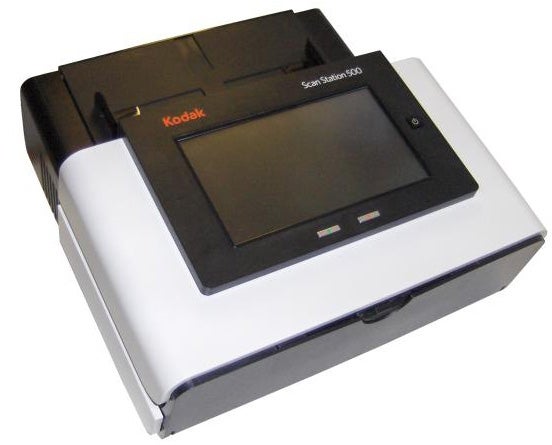 By default, page images came through clean, but there were a number of back-sides of pages, which should have been detected as blank. The scan brightness can be lowered to counter this, but it could be better by default. No OCR software is supplied with the scanner, so it’s up to you to interface the images you scan with your preferred application.


Although the use of USB drives to control user accounts is innovative, we’re not at all sure it’s as convenient or as secure as having the details stored on flash memory in the scanner and accessed by password. USB drives are notoriously easy to lose and passwords, although a pain to remember, are much less costly to update. The scanner itself is quick, easy to use and easily able to service even a busy workgroup.