Kodak brought waterproof Full HD video shooting to a new low price with its Playsport Zx3. But whilst this model looked pretty rugged, Kodak gave no guarantee of its ability to withstand rough treatment. Enter the Zx5; rated dustproof and shockproof, as well as waterproof.

The dust rating complies with IEC 60529 IP6X, and shock proofing with MIL-STD-810F, meaning that the Zx5 can withstand a fall from a height of 1.5m. The waterproofing specification hasn’t changed, with Kodak still quoting a maximum depth of 3m, although this is now stated as being compliant with the IEC 60529 IPX8 standard.

Inside, the Zx5 has a slightly different specification to the earlier version. Both incorporate 5MPixel sensors, but the Zx5’s CMOS one is a slightly smaller 1/3.2in version, where the Zx3’s is 1/2.5in. This does have implications for low light sensitivity, and Kodak doesn’t mention any back-side illumination technology to compensate. The same range of recording modes are on offer. The top option is 1080p Full HD captured at 30 frames/sec, but you can also grab 720p at 30 or 60 frames/sec, and WVGA at 30 frames/sec. The latter is a widescreen version of VGA, with a resolution of 848 x 480 pixels. You can take still images at 5.3Mpixels, too. 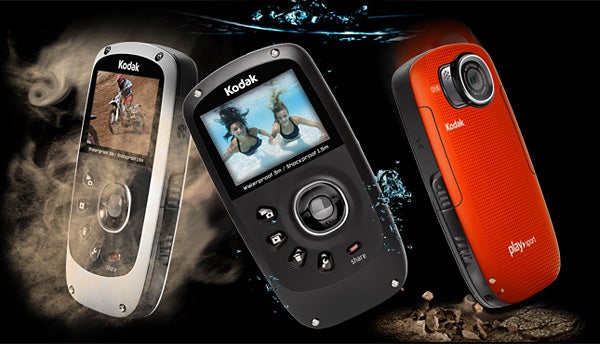 The Zx5 does come with 128MB of memory on board, but the lion’s share of this is already earmarked for the built-in software (of which more later), leaving a miserly 20MB for video – enough merely to check the camcorder is working. So you will need to call on the SD memory card slot. This only supports SDHC, not the latest SDXC format. So capacity maxes out at 32GB. This will be enough for around 13 hours of footage at the top 1080p quality setting.

So what of the much-vaunted toughness? The device is encased in soft-touch, mildly rubberised plastic. There are two lockable doors covering the ports and memory slot respectively. Rubber seals inside cover the openings themselves, and the doors are held in place by switches which lock into place. These don’t feel quite as secure as Panasonic’s toughened camcorders, such as the Panasonic SDR-SW20, but our experiments with trying to knock these open ‘accidentally’ proved ineffective. A direct blow on the switch might just trip it, but this would be a rather unlucky situation.

We also dropped the device in water and from heights of over a metre onto a variety of surfaces. Hard, rough floors did leave the occasional scuff mark on the finish of the device, but the waterproofing doors remained closed and there were no signs of the chassis fracturing. Overall, whilst we wouldn’t recommend use during extreme sports, the Zx5 will certainly withstand most non-extreme leisure activities. However, it’s also worth noting that in the move to greater toughness, the battery is no longer removable, unlike the Zx3, so you would probably have to buy a new camcorder if this becomes dysfunctional out of warranty. 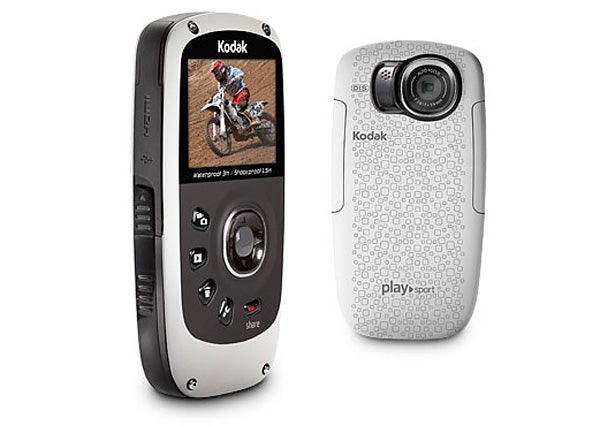 As with most pocket Internet camcorders, the Zx5 isn’t exactly brimming with features. The zoom is just 4x and digital, so there is a noticeable drop in quality when it’s engaged. A small range of digital effects are available, including High Saturation, ‘70s Film, Black and White, and Sepia. An underwater correction filter is included, which compensates for the colour shift caused by shooting through water. The Zx5 does have image stabilisation, too, but it’s digital and only marginally effective. Still worth having, but technological development has focused on this area quite a bit in recent premium camcorders, and there’s a wider gulf between these and budget models now.

Amazingly, the Zx5 does have a microphone gain control so you can compensate for very loud or quiet audio. You can configure the anti-glare system, and LCD brightness, which mildly improves viewing angles in direct sunlight. There is also, allegedly, face-detection, although with the fixed lens this will only affect exposure, and we didn’t see any signs of it in operation during testing anyway. There’s a macro mode hidden in the menu system, too, which allows focusing down to 7cm (10cm underwater) instead of the 10cm (13cm underwater) in normal mode. You don’t get any backlight compensation option, though, which would have been handy for manually counteracting the effects of shooting something against a very bright background, such as a sunny sky or snow.

Although the Zx5 has a slightly smaller sensor than the Zx3, video quality isn’t noticeably different. In Full HD mode, there’s plenty of detail, but white balance is a little off, with a mildly yellow tinge to footage shot in bright sunlight. The results are still good for a camcorder in this class, however, comparing well to similarly priced Flip models. Low-light performance is decent, too. The image is a little dark, but there’s not much sign of noise, and there’s a good level of detail. Sharpness is some way behind more expensive pocket Internet models such as Sony’s Bloggie Touch MHS-TS20K, but this is again a commendable performance. 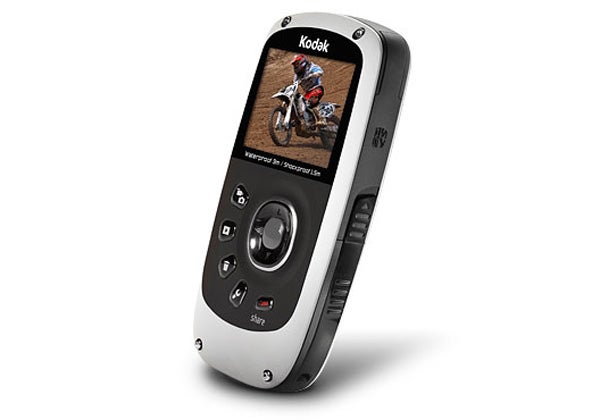 Although the Zx5 is still essentially a pocket Internet model, the constraints of waterproofing have prevented the usual addition of a full-sized USB plug. So you will need to bring the cable with you to connect the camcorder to a computer. When you do, there are two apps available. The Share button on the camera lets you choose to upload to Facebook, Flickr, YouTube, via email and (in the case of still images) your Kodak PULSE Display gallery. The uploads then proceed automatically when you connect the camcorder to your computer. You can also tag your uploads on Twitter, Orkut, Yandex and KAIXIN001, although the actual choices depend on the region in which you bought the camcorder.

If you want to edit your clips prior to upload, there’s also a special Kodak version of Arcsoft’s Media Impression, which installs automatically when you connect the device to a PC. This provides facilities to trim your clips; add a voice-over, pictures and music; grab stills from video, and then upload to your favourite sharing site. Both apps, as with so many pocket Internet camcorders, are PC only, with no Mac support. However, there’s also a limited amount of on-camera footage editing available. You can trim the in and out points of clips, and grab a still frame as a separate photo.

The Kodak Playsport Zx3 was already great value for a waterproof pocket Internet camcorder. The Zx5 is around £30 more than the current price for the Zx3, and although it doesn’t add much in the way of extra features, the improved shock rating makes it even more dependable for outdoor activities. The Zx5 can’t quite compete with its predecessor’s sub-£100 price, but we’d still recommend it if you want a camcorder you can take with you anywhere, come rain, shine or a rough ride.