Once upon a time, Kodak dominated the world of film. But although the company adopted digital technology early on, in the mid-1990s, other companies have taken the lead since then. With its range of pocket Internet cameras, Kodak is beginning to make a new name for itself. The Zi6 has proven fairly popular. Now the company has added waterproofing with its latest model, the Playsport Zx3, giving you added shooting opportunities.

The Playsport offers a familiar appearance, now that we’ve seen so many pocket Internet camcorders. Its form factor resembles a regular mobile phone, with the main controls on the rear and a 2in LCD above them. As with a number of recent pocket Internet camcorders, the Playsport incorporates a surprisingly large sensor considering its budget orientation. This is a 1/2.5in CMOS sensor with a healthy 5-megapixels, although the primary benefactor of the full pixel count will be digital photography, which can be performed at resolutions of 3,072 x 1,728 pixels. 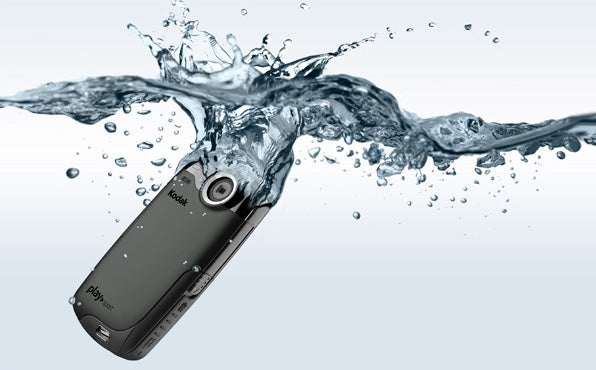 Video can be recorded at 1080p Full HD, but there are also 720p and WVGA options as well. The latter uses a resolution of 848 x 480 to provide a widescreen version of VGA. All of these run at 30 frames/sec, but you can also record 720p at 60 frames/sec. Video is captured using H.264 compression and a QuickTime MOV format, at a data rate of just under 13Mbits/sec for the top quality setting, which is reasonable for a camcorder in this class. However, audio is only recorded using AAC LC compression in mono, so you won’t be able to capture a classical music recital in all its glory. Footage is captured to removable SD memory, with SDHC format cards supported, so there’s a 32GB limit on capacity. A card this size would be enough for 5.5 hours of footage at the top quality setting.

Being a pocket Internet camcorder, the Playsport’s features are few and far between. There is a 4X zoom, but it’s digital so will reduce detail when used. The lens itself is fixed, with a focal range of 1m to infinity. So all but the nearest subjects will look sharp, although there’s no macro option for extreme close-ups. Image stabilisation is available to counteract jerky camerawork, but it’s electronic, and therefore not as effective as the optical systems employed by higher-end models. At least you can choose to turn it off if you want.


There’s also an exposure control, although this only has three levels, or you can set exposure to auto mode. Surprisingly, there’s a microphone level control as well. Face detection is available, too, and this can be disabled if desired. It proved itself reasonably capable at picking up faces and adjusting exposure accordingly during our testing, although focus remains fixed. 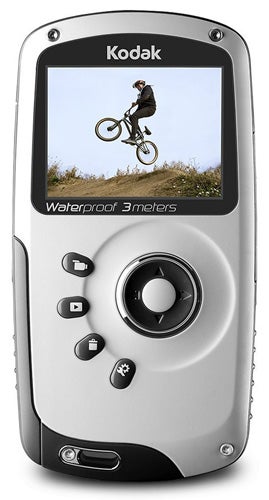 A further setting enables an LCD glare shield, which allegedly improves visibility in bright conditions, although the dull winter weather at the time of this review didn’t give us much opportunity to really put this feature through its paces. That’s about it for manual settings. You get a little more to play with than some pocket Internet models, but there are no options to alter focus, shutter, iris, or even preset scene modes, which is par for the course for a camcorder in this class. Pointing and shooting are meant to be your main options.


Nevertheless, the Playsport is obviously not just another pocket Internet camcorder. Its underwater abilities are a key selling point, and here it matches other waterproof models currently on the market, at least on paper. Kodak claims it will handle a depth of 3m, so underwater antics whilst snorkelling or in the local lido will give it no problems, assuming you’re allowed to record footage at the latter. But deeper diving will be risky. There’s an underwater setting available, too, which alters the white balance to compensate for the effects of sub-marine shooting.


The Playsport is ruggedised, although Kodak makes no quantified claims as to what height you can drop the unit from onto which kind of surface and get away with it. Two flaps are used to keep the internals dry, with one covering the ports and the other the removable battery and SD memory slot. These are secured by sliding switches, which will be quite hard to open accidentally, although they’re also a little tricky to secure in the first place. We found the Playsport resisted the water testing we inflicted upon it with flying colours.

With its large sensor, the Playsport promises reasonably good image quality for the price, although we’ve come to expect this from pocket Internet camcorders. In good lighting, there is a slight sign of grain, and some softness of detail, but nothing too detrimental, and detail is beyond 720p competitors. Performance in poor illumination is also very creditable, with colour remaining faithful in quite low light, and only a small amount of extra grain. Overall, the Playsport can’t quite compete with the best in this class, Sony’s Bloggie Touch and JVC’s PICSIO GC-FM2, but its video quality is extremely good for the price. 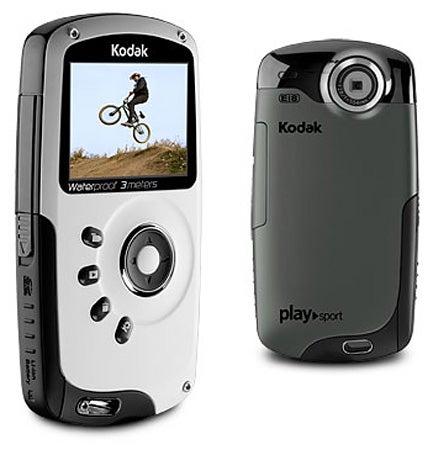 Unlike virtually all camcorders of this type, the Playsport’s USB 2 plug isn’t built in, with a separate cable supplied in the box instead. But it still has software integrated, in the shape of Arcsoft’s Media Impression. This installs when you first hook the camcorder up to you computer, and the USB connection is also used for recharging. 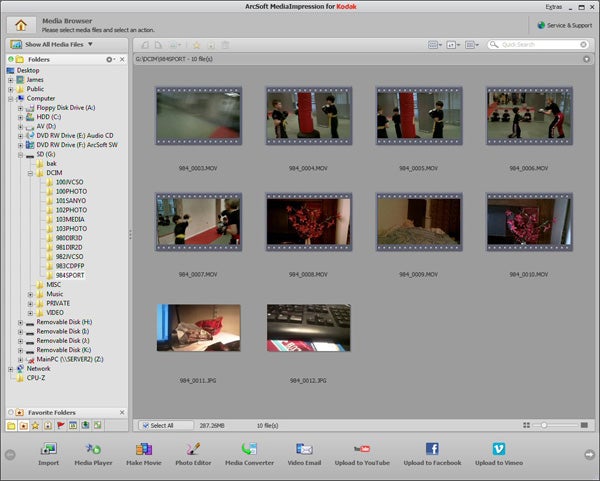 Media Impression can trim videos, combine them into a sequence with transitions, add titles, captions and a voiceover. But no video filters are available to improve the look of your footage. When you’re finished, Media Impression can share the end product on Twitter and Facebook as well as the ubiquitous YouTube, and Vimeo. So its capabilities are somewhere in the middle of the pack. However, if you own a Mac you will only be able to access the files on the storage card.


If you just want to watch your footage on a TV, there’s a mini HDMI port available and a cable supplied in the box. Alternatively, a 2.5mm microjack provides connectivity for mono RCA audio and composite video, again with the requisite cable supplied.


The Kodak Playsport doesn’t break any particular new ground. However, at just shy of £90 it provides quite a lot for your money, offering both 1080p and underwater shooting. Panasonic’s HM-TA1 is currently the best deal of all, Sony’s Bloggie Touch has some unique abilities, and JVC’s PICSIO GC-FM2 offers the most features in this class. But the Playsport would be perfect for capturing beach or river activities at a very affordable price, making it well worth considering if your needs are more outdoor oriented.