The Kodak Pixpro 4KVR360 – also known as the Kodak Orbit360 4K – is a 360-degree VR-friendly camera, not to be confused with the similarly named Kodak Pixpro SP360 4K. The big difference between the two models is the 4KVR360 combines two wide-angle lenses into a single body, whereas the SP360 4K requires you to mount two completely independent cameras together if you want to capture a 360-degree video.

Needless to say, the 4KVR360 makes for a much more convenient and compact VR camera. Compared to rivals, the 4KVR360 also allows for more than typical shooting modes due to its slightly unorthodox lens combination.

The camera has its limitations, however, one being its 15fps video when shooting at its maximum 3840 x 1920 resolution with the ease of immediate compatibility with YouTube (and not in its RAW/Dome mode). Nevertheless, it remains one of the more compelling VR cameras on the market – but not one without its flaws.

In terms of size, the Kodak Pixpro 4KVR360 sits between the likes of the compact Samsung Gear 360 and the decidedly gargantuan Kodak Pixpro SP360 4K. In fact, it’s about the size of a single SP360 4K camera I tested previously; don’t forget you had to mount two of those back-to-back if you wanted full 360-degree video. It also now comes in white rather than black.

You’ll notice the asymmetrical lenses on the Pixpro 4KVR360, where one lens is much bigger than the other. Most VR cameras have identical lenses front and back, splitting the footage straight down the middle for re-stitching (with some overlap between the two lenses’ FOV). The Pixpro 4KVR360 sets itself apart with a 197-degree lens combined with a 235-degree lens. 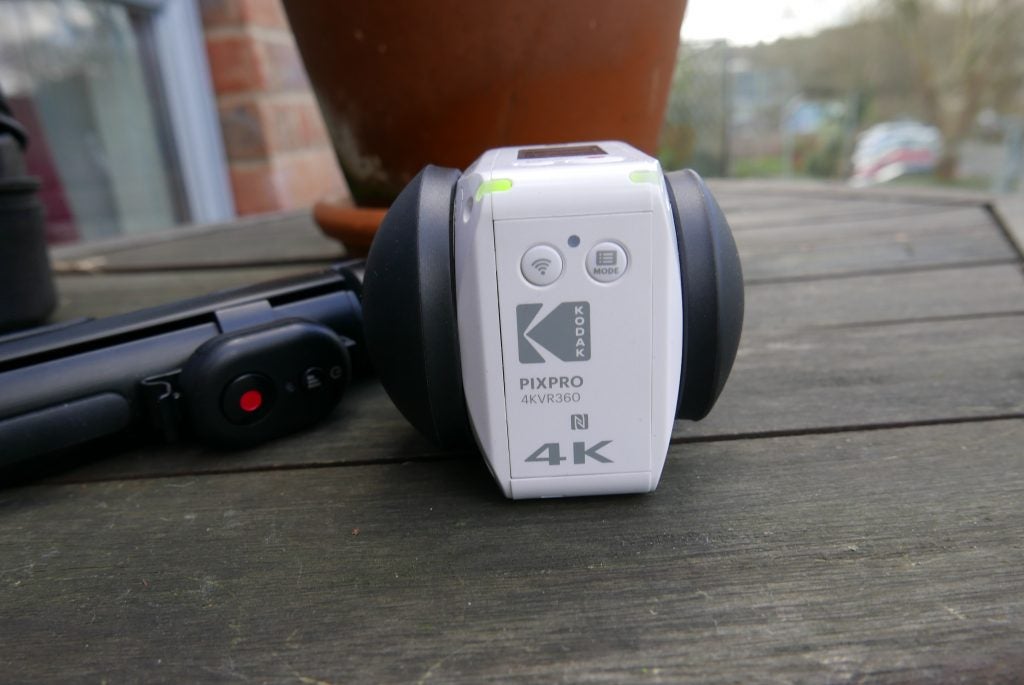 The former is labelled as the ‘Front’ lens, which you can use on its own in an ultra-wide mode; wider than an action camera such as the GoPro Hero 6 Black.

However, the Pixpro 4KVR360 isn’t quite as resilient as a GoPro, but it is rated as splash-, dust-, freeze- and shock-proof to varying degrees. The latter is only with the included lens covers in place, though, so is potentially a little redundant.

The 235-degree lens can also be used on its own for a ‘Dome’ effect, or you can use both lenses combined for a full 360-degree view. 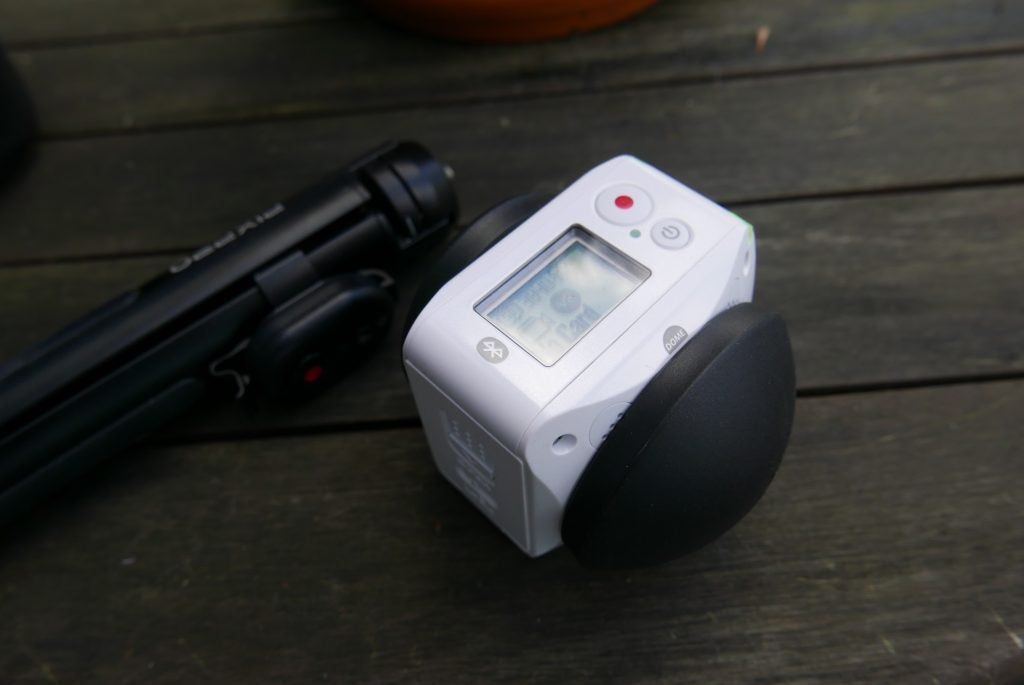 A display on top makes it easy to determine the mode you’re in, and LEDs light up so you can see when the camera is recording

Along the top and side of the camera body you’ll find the camera’s controls. Navigating the menus and changing settings can be a little fiddly due to a lack of buttons. Thankfully, you can always pair with the companion iOS or Android app through the camera’s Wi-Fi direction connection. 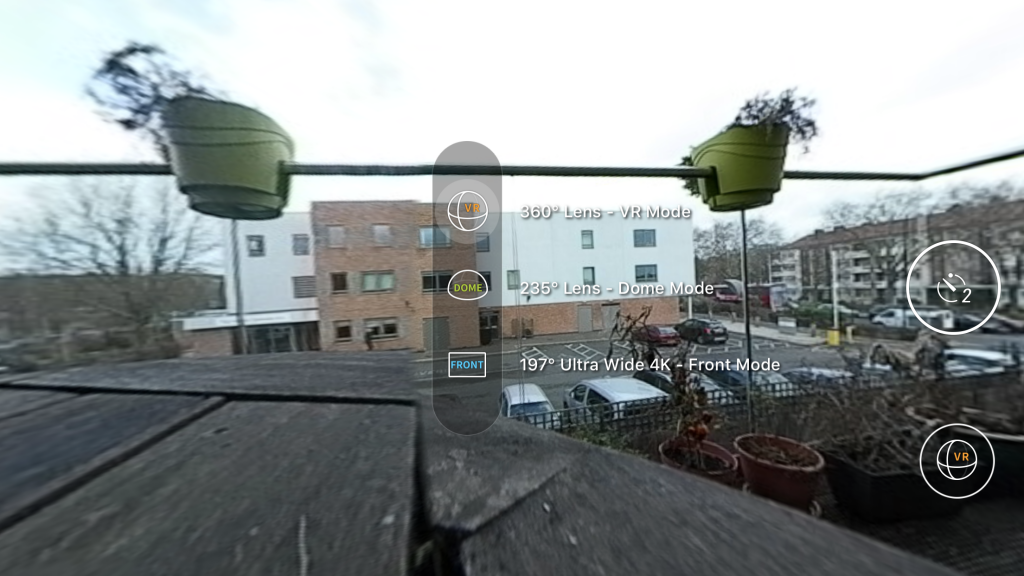 This provides a live view of the sensors, with the option of toggling between different viewing modes as well as changing the camera’s various settings. These include the resolutions, frame rates and shooting modes. I found the app prone to crashing, however.

Tucked away behind a cover you’ll find a replaceable battery, micro-USB port for charging, micro-HDMI output and a 2.5mm external microphone jack. 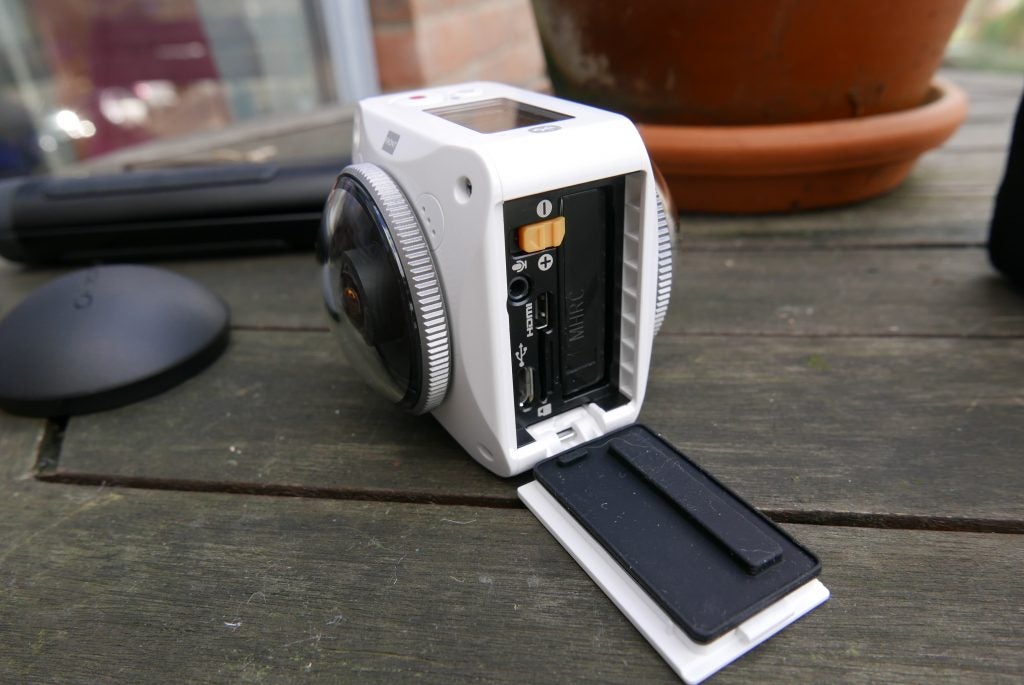 You get a decent assortment of accessories included with the camera, including a pair of lens protectors, lens covers, a travel case, mini-tripod and a small Bluetooth remote control. You also get a battery-charging cradle, which is ideal if you pick up a spare battery. There’s also a 3840 x 1920/24fps option when shooting in Raw/Dome mode, but getting this recognised by YouTube as VR footage requires you to put the video through Kodak’s VR Suite desktop software, which is a bit more involved. I had to follow instructions sent by Kodak before I could do anything with this footage, and even then it wasn’t without its hurdles.

If you’re willing to drop the resolution to 1440 x 720, you open up the possibility for 120fps high frame-rate video – but that low resolution isn’t ideal for VR purposes. 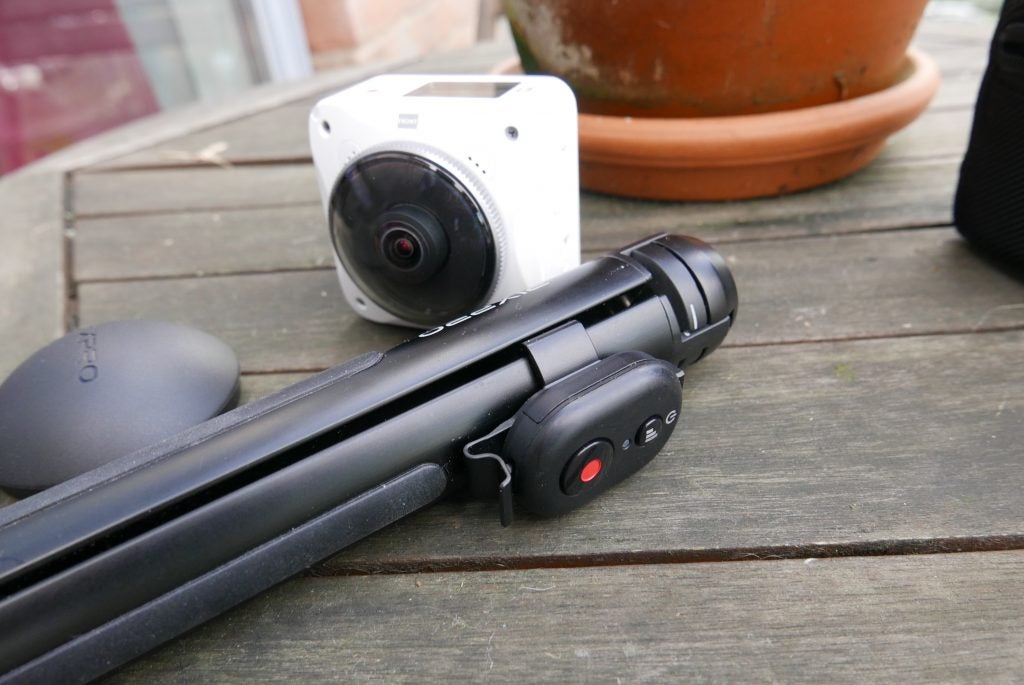 Image quality is pretty good, but not a patch on more expensive cameras such as the Garmin VIRB 360 or  Kodak Pixpro SP360 4K. Colours are a little muted for my liking, and it’s definitely much softer towards the edge of the frame where the two sensors are stitched. The stitching, as ever, isn’t perfect with objects close to the sensor overlapping noticeably. It’s a problem I’ve encountered to varying degrees with all of the VR cameras I’ve tested.

A behind-the-scenes look at a TR unboxing – 15fps

This is what happens when you upload un-edited RAW ‘Dome’ footage to YouTube.

As for battery life, you can expect about an hour of video at 3840 x 1920/15fps, which is pretty typical. As mentioned, you can either charge directly through micro-USB or remove the battery and use the external cradle. 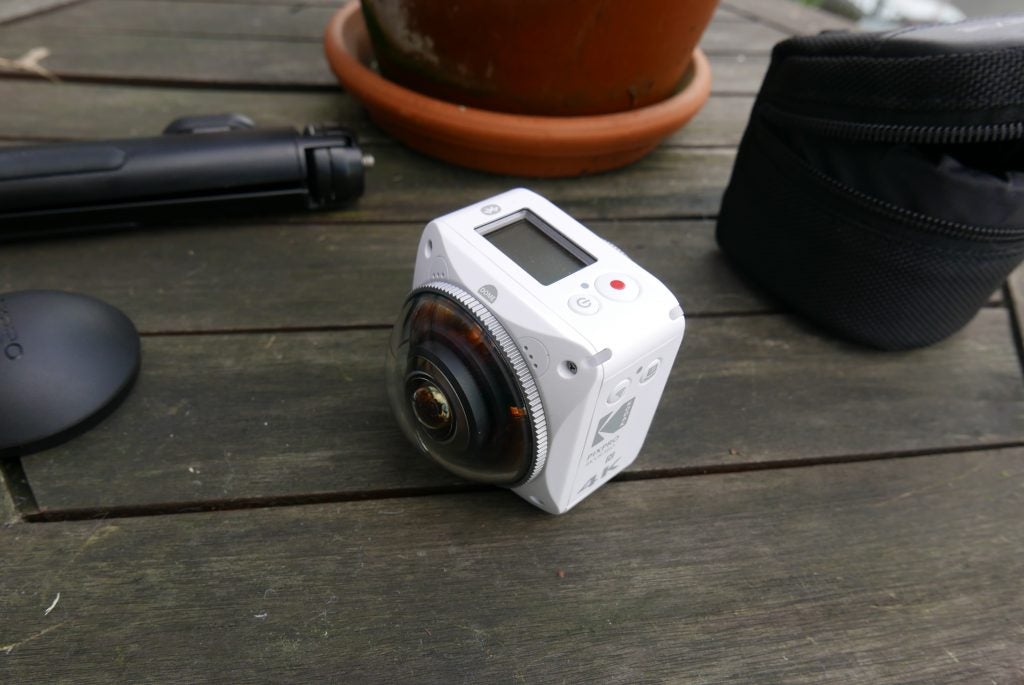 If you’re looking for a relatively small-form-factor VR camera, the Pixpro 4kVR360 gets plenty right. This is especially true when compared to the cumbersome and more expensive Kodak Pixpro SP360 4K Dual Pack – which, while offering great image quality, was incredibly difficult to work with.

The 4KVR360’s image quality treads the middle-ground between cheaper 360-degree cameras such as the Samsung Gear 360 and LG 360 Cam, and the higher-end models such as the Garmin Virb 360 and GoPro Fusion. It’s leaps and bounds better than the similarly priced Nikon Keymission 360, at least.

I just wish that higher frame rates were available when not shooting in the Raw/Dome mode, as the footage isn’t automatically recognised as VR-compatible. Some questionable English in the app and occasional crashes also take some of the gloss off the overall package.