Kodak’s new Hero range of all-in-ones has impressed us so far but today we’re looking at a model meant for the much more exacting small office market, rather than just for the home. The Office Hero 6.1 packs in all the normal features of an all-in-one and includes a duplex scanner, and Kodak will be hoping it’s among the models that will lift the company from number two here in the UK to number one.

The greatest difference from previous Kodak Office machines, like the https://www.trustedreviews.com/kodak-esp-office-2170_Printer_review ESP Office 2170 is the increased height of the Automatic Document Feeder (ADF), which gives the printer a slightly top-heavy appearance. 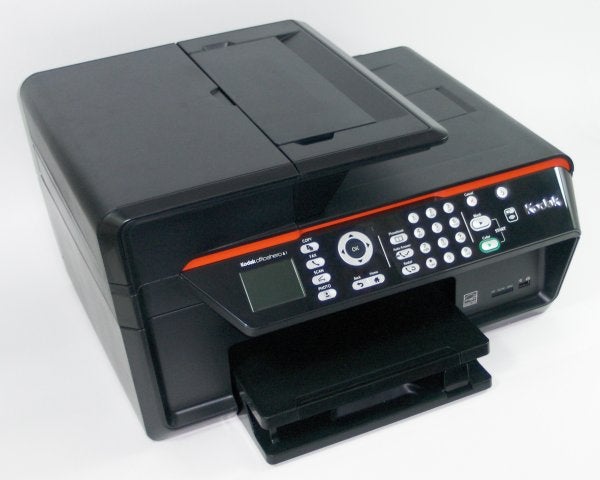 The reason for the bigger ADF is that it’s duplex, so it can scan both sides of the page in one task, though each page does have to make three passes. Duplex scanners are a good thing for paper saving, particularly if you default to printing double-sided.

In front of the ADF is a well laid-out control panel that actually has the same layout as the ESP Office 2170 but is cosmetically different, and with a much larger, 61mm LCD display. 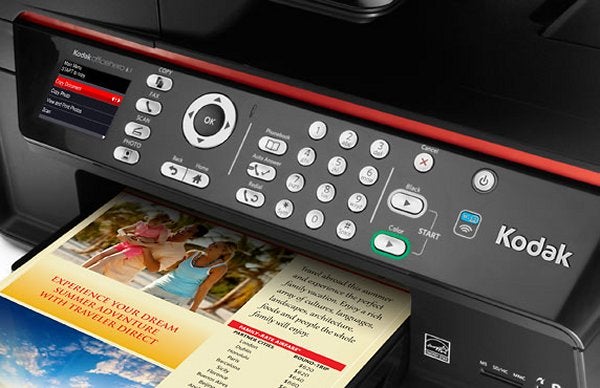 There’s a single paper tray, with no separate photo tray, which feeds from the front to an extending output tray, also at the front. A single memory card slot takes both SD and MemoryStick cards and sits next to a USB/PictBridge socket on the front panel. At the back are USB and Ethernet sockets, but most people will choose wireless connection, as this opens the opportunity for direct connection to the Internet.

Slightly surprisingly, this machine uses the same No 10 cartridges as earlier Kodak all-in-ones, offering text and photo blacks and a clear overcoat layer. We assumed the No 30 cartridges, with their cheaper, four-ink design, would be used throughout Kodak’s new range. The cartridges clip in very easily under the scanner section and the high-capacity XL black cartridge is supplied as standard.

Software is based on Kodak’s AIOCenter suite and includes OCR software. Surprisingly we had to update both the driver and printer firmware straight away, despite this being a ‘brand new’ machine.

Print speeds from the Kodak Office Hero 6.1 are very similar to earlier models and we saw 4.8ppm from the 5-page text document, rising to 5.4ppm on the 20-page one. Draft mode gave 8.6ppm and the 5-page black text and colour graphics print returned 3.1ppm, slightly slower than the 20-page duplex speed of 3.4spm. All reasonable figures.

Copy speeds depend on whether you’ve selected to collate the output. With collation on, a five page copy from the ADF took 2:14, mainly because printing can’t start until scanning finishes. It appears the page buffer can only hold eight pages, limiting the length of collated documents that can be copied. With collation off, copying completed in 1:27. 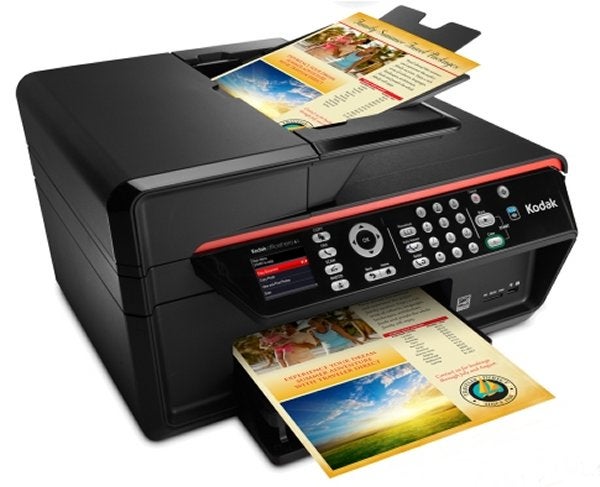 There are also definite problems with the print from this machine. We noticed them on the first review sample we had, so requested a replacement, but the second showed the same problems. We ran tests using the latest driver and firmware updates and on the same Staples Multiuse paper we use for all plain paper tests.

Single-sided printout is fine; black text prints cleanly and colours are lively and show little sign of dithering. Duplex prints, however, come out around 10 percent smaller than single-sided ones, which may not sound a lot, but is very obvious when you look at the printouts side by side. 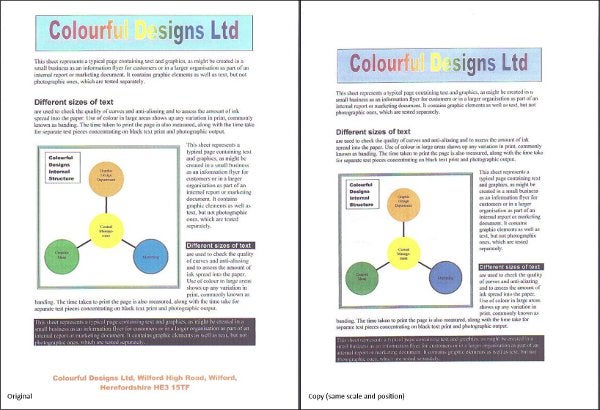 Kodak said this was because we’d left the Maintain Layout option checked and when we unchecked it, sure enough, the duplex page returned to normal size. So the checkbox works the wrong way round – no big deal.

Except that the same thing happens when you make a duplex copy through the ADF, and there’s no Maintain Layout checkbox in the printer’s display menus to uncheck. All our duplex copies came out 10 percent smaller than the single or double-sided originals we tried.

Some single-sided copies via the ADF, though not from the flatbed, also show a faint grey background. There’s a ‘brightness’ – more properly lightness – control on the printer so you can lighten the image and lose the grey, but then the rest of the copy is too light overall. Again, the grey background was apparent from both samples of the printer, as were occasional thin vertical black lines, not on the originals.

Photo prints on the other hand are very good, with natural shades, fine detail and smooth colour contours.

What’s more, a major plank of Kodak’s sales pitch is low printing costs and using the best prices we could find for the two cartridges gives page costs of 2.2p for black and 5.0p for colour pages. These are both very good for an inkjet all-in-one and should maintain Kodak’s lead in this area, over most of its competition.

Verdict
What sets out to be a good evolutionary update to Kodak’s SOHO all-in-ones is let down by the anomalies we found in its copying, and particularly duplex copying, abilities. It’s possible they could be fixed by firmware updates, but as things stand, it’s not possible to recommend this machine.