Kodak now has a range of all-in-ones, all of which use the same print engine and cartridges. The latest, the ESP Office 6150, is intended for the SOHO (small office, home office) market and includes features like an Automatic Document Feeder (ADF) and a duplexer, which should boost productivity and save paper.


The ESP Office 6150 is discreet for an all-in-one, in its all-black case with Kodak-yellow highlights. The ADF doesn’t add a lot to its height, but can still feed up to 30 sheets at a time. To lift the scanner lid, you have to squeeze your fingers into the gap between the top of the control panel and the underside of the lid, which is awkward, but it feels solid and well made when you do lift it. 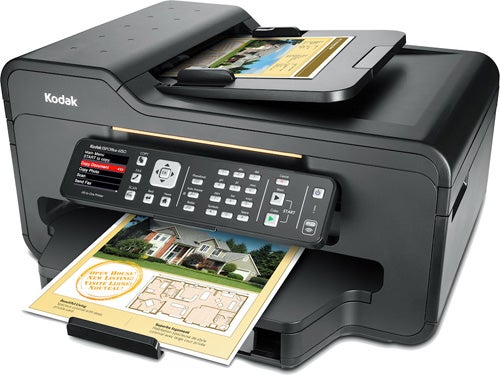 The control panel itself isn’t particularly special. There’s no touch screen or wide-screen LCD, just a fairly modest 61mm colour LCD at the far left, with navigation control, a numeric pad and start and stop buttons as you move right. The buttons are small, but quite positive to the touch.


The name says this is an office all-in-one, so perhaps you wouldn’t expect memory card sockets. The original EasyShare 5500, another ‘office’ machine, had them, though and a front panel PictBridge socket, too, all for a similar price. This machine has neither, leaving it looking a bit under-specified, though it makes up for this in part with Wi-Fi, including the ability to print from Blackberry, iPhone and iPod Touch.


Paper feeds from a generous 200-sheet paper tray at the front, onto an extending support above. At the back are sockets for USB, Ethernet and fax/phone ports, but many people will go for the wireless connection.

This is easy to set up from the control panel and is compatible with most of the common security protocols. Ink tank installation is equally simple; there are just the two tanks to plug into position in the head carrier. One is black and the other has cyan, magenta and yellow, plus a photo black and a clear overlay ink, to protect photo prints.


Kodak provides its own scanning and file management software and a second disk containing OfficeReady, which installs an extra toolbar into Word, offering document templates and colour schemes.

On a printer with wireless capabilities, we normally run tests with a wireless connection. The ESP Office 6150 was very hesitant, though, pausing after most passes of the print head and returning test times which were a lot slower than we expected. We reinstalled the machine with a USB connection and these glitches went away, but we’re left wondering if this is an isolated case of an early review sample, or not.


Even with a USB connection, the machine was inexplicably slower at the 5-page and 20-page text prints than the Kodak ESP 5250, tested a few months back. That machine returned speeds of 4.7ppm and 5.1ppm, while this one could only manage 3.3ppm and 3.6ppm, respectively. Since both printers use the same engines, this is quite surprising, more so since the 5-page black text and colour graphics test took 1:42 on both machines. 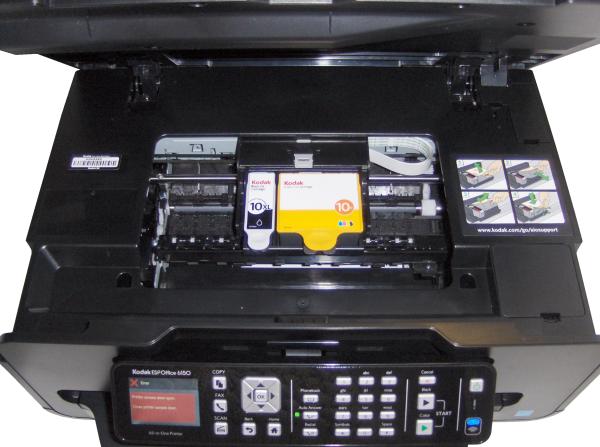 Start using the duplexer and the ESP Office 6150 slows further though, to Kodak’s credit, you can change the time it waits between page sides, depending on the media you’re using – a more absorbent paper won’t need as long to dry. Our 20-side, 10-page document took 6:40 to print, a speed of 3.0spm.


Copies are quite quick, with a single page, colour copy taking 30 seconds and a 5-page black text one taking 1:46. A 15 x 10cm photo from a PC took just over a minute, which is also fast.


Print quality is generally good. Black text shows a little fuzziness from ink spread into the fibres, but is quite readable and colour on plain paper is bright, if a little pale, by default. A colour photocopy does well, losing little of its colour in comparison with the original. Our test photo came through highly detailed, with smooth colour transitions though, as so often, there was some loss of shadow detail.


One oddity with the machine is that there’s a larger, unprintable top margin when printing duplex than when printing single-sided – we lost half a line of text from each page of our test document. It’s no problem as long as you’re aware of it, of course, so you can lay out your pages accordingly.


Paper feed is quite noisy, peaking at 66dBA, and the ADF motor is also comparatively loud. 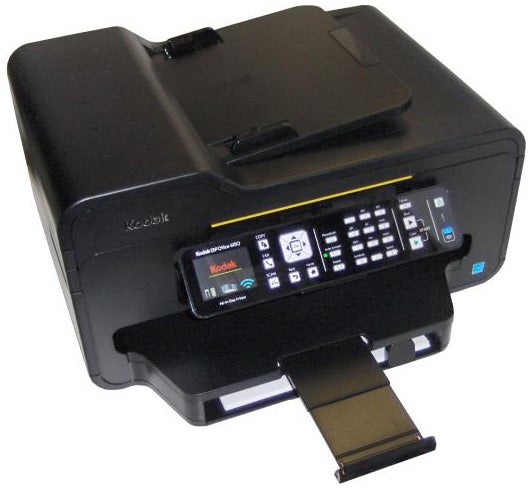 The two ink cartridges are available very inexpensively, but the cheapest source we could find offered them as cheaply bought singly as in a combo pack. This gave page costs of 2.6p for ISO black and 4.9p for ISO colour pages. These are considerable cheaper than from equivalent all-in-ones. For example, the £226 Canon PIXMA MP990 gives costs of 3.2p and 9.3p and the £190 Lexmark Interact S605 offers 4.7p and 11.8p.


Kodak’s claim to offer much cheaper printing holds a good deal of weight, as you can cut both black and colour print costs using its inexpensive inks. You don’t lose much in print quality, either. The only question mark is the speed you get from the machine, particularly if connecting it wirelessly. The ESP Office 6150 appears to be slower than its cheaper predecessors, which isn’t the way it should be.