Kodak is determined to make as much as it can from the inkjet engine it introduced in its original all-in-one machines a couple of years ago. Its latest incarnations of this efficient device are the ESP 7 and ESP 9 machines, and here we’re looking at the top of the range ESP 9. Intended as a SOHO (Small Office, Home Office) machine, it sports a couple of interesting design improvements over the earlier printers.


From its 50-sheet Auto Document Feeder (ADF), to its twin, plain and photo paper trays, the device is all decked out in black. Its front panel is high-gloss and the rest are frosted. A yellow keyline above the control panel and the Kodak logo are all that identify the machine. It’s most obvious innovation is a touch control panel which swings out from the front. All controls are outlined in bright blue and comprise a menu diamond, zoom controls, start and stop buttons and a number pad for fax dialling. 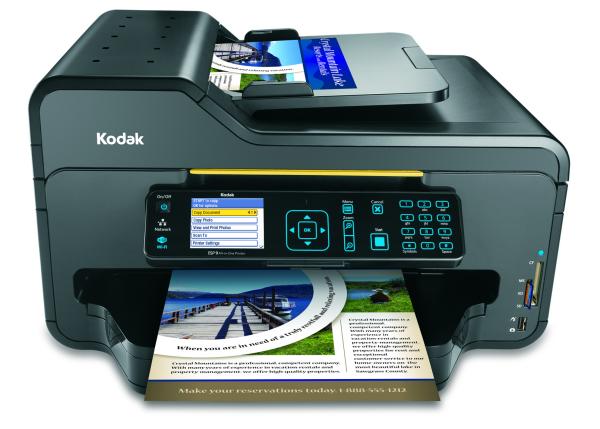 There’s a 76mm OLED display, which is bright and clear, though the font chosen for displayed text is a bit scrappy, with irregular stroke widths and varied character spacing. The controls are very easy to use, though it’s a little disconcerting that the display screen itself doesn’t have a touch overlay.


You get plenty of options when it comes to connecting the ESP9 to your PC. There are USB and Ethernet sockets at the back, but it also has Wi-Fi. When you select for a Wi-Fi connection, the machine searches for likely wireless networks and, once you’ve selected one, asks you for your network’s encryption key, though in a fit of nerd-speak, it calls this a ‘Security String’.


Software installation is similarly straightforward, though we chose to check for updated software of the Web and had to wait for a 275MB file to be downloaded – irritating if you’re not on fast broadband.


Supplied software includes a front-end to handle scanning and copying, as well as uploading photos from the machine’s twin memory card readers or the PictBridge socket, which doubles as a walk-up, USB print connection.

We’re thinking of writing a word macro to insert the words ‘Pay no heed to printer maker’s speed claims’ into all printer reviews. Kodak claims 32ppm for black print and 30ppm for colour on the ESP 9. Even in draft mode, you won’t get close printing normal documents. We claim 5ppm for black print on longer documents and 2.3ppm for typical, five-page text and colour graphics. These are not particularly quick results, even for an inkjet.


A colour photocopy took 40 seconds and a five-page black text photocopy from the ADF took two minutes 50 seconds, so again nothing exceptional on the speed front. It does a lot better on photo prints, though, with a best time of just 49 seconds when printing from an SD card. 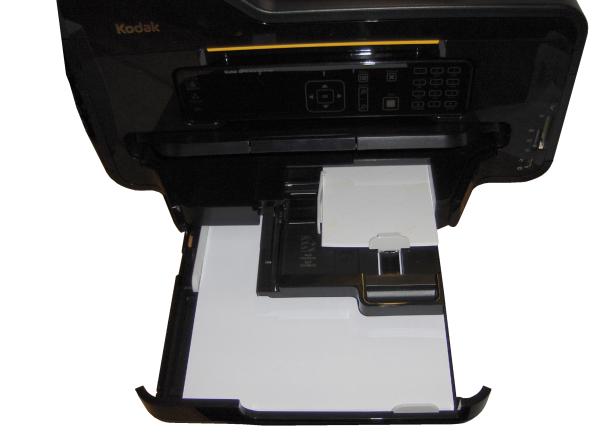 Print quality is variable. Black text is sharp and well-defined and colours are generally bright. We saw some unusual mottling on solid areas of green and orange on plain paper, but nothing too untoward. Registration of black text over colour showed only slight haloing.


Photo prints, on Kodak’s highest quality paper showed some unusual noise in darker areas of shadow and very faint banding in the sky, but our secondary test prints reproduced well from memory card and PictBridge.


We noticed a couple of anomalies with the print from this machine. For a start, our text and colour graphics print showed a weird effect on the coloured headline, where the fountain fills for the characters – produced as WordArt in Word, so nothing wild and whacky – escaped their outlines. We put this down to a driver fault and have included a print out of how it looked and how it should have looked.


The second problem is an unusually large top margin to pages, when you use the printer’s duplex facility. Our standard text document, which normally prints without problem on duplex machines, had around 1mm chopped off all header text. This may not sound a lot, but it means you need to allow 17mm at the top of all duplex documents. We haven’t seen this cropping on other duplex printers. 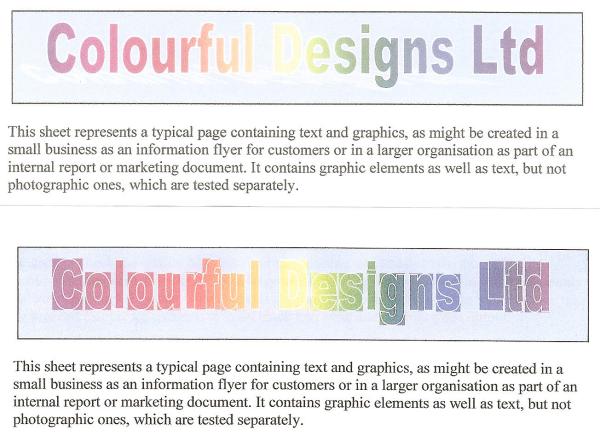 There needs to be a few words about the noise level of the ESP 9. We’ve never known a machine with such a wide range of clicks and whirrs, from the moment you switch it on, through printing, to its periodic maintenance. We measured peak levels of 64dBA at 0.5m, during paper feeds, which is as loud as a workgroup laser printer.


The costs of the two ink cartridges, one black and the other adding photo black and transparent overcoats to the cyan, magenta and yellow you would normally expect, have come down from their already low prices. We found them at £5.59 and £7.99, respectively, which gives ISO page costs of 2.44p and 2.92p. This includes 0.7p for paper, but also assumes that only photo black ink is used in printing colour pages.


The black print cost is one of the best we’ve seen from an inkjet, while the colour print cost is definitely the best. If you’re forever complaining that you’re inkjet consumables are costing you the earth, you should switch to Kodak.


As Kodak continues to produce printers with very low consumable costs, the value of its machines has to take that into account. However, the ESP 9 has a few rough edges, not least the noise levels it produces when printing, it’s relatively sluggish speed and the driver problem we noticed. This is a fair home office all-in-one, with quality print delivered slowly.