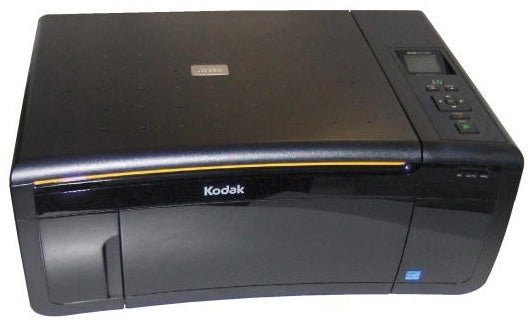 Following on from the ESP 3, the new machine has a similar, all-black case with an unusual concave front panel and frosted, flat top surface. Set into a panel to the right of the flatbed scanner is a simple control panel, complete with a 38mm LCD screen, the key feature distinguishing the ESP 3250 from its cheaper sibling.


The display is angled into the top surface of the machine, so it can be read from quite a wide angle, though not if you’re seated beside the all-in-one. Directly in line with the control panel, a slot in the front face of the machine takes SD and MemoryStick, but not xD cards, so you’ll need an adapter, if you want to use it to print pictures from your Fujifilm media.


Before you can use the printer, you have to load it with paper, and the feed and output trays work in an HP-like way. Fold down the centre section of the front panel and it becomes a paper tray, into which you can load plain or photo paper from 15 x 10cm up to A4 sizes. The pages then feed into the machine, making a 180-degree turn before feeding out to lie flat on top of the input paper stack. An extending paper support stops pages falling to the desk. 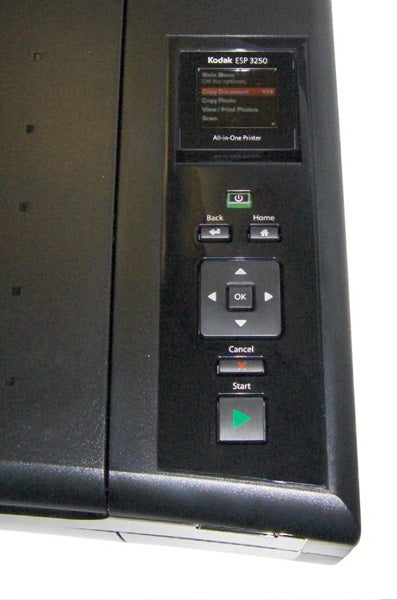 At the back of the machine is a single USB socket, the only way of transferring data to the ESP 3250, and a low-voltage socket for the black-block power supply, which comes with an unusually short mains lead.


Like all of Kodak’s other all-in-one printers, this one uses a simple, but well-designed print engine, where a semi-permanent head clips into the head carrier and itself carries twin ink cartridges. The first of these is pigmented black and this is accompanied by a four-colour, dye-based cartridge for graphics and photo printing. 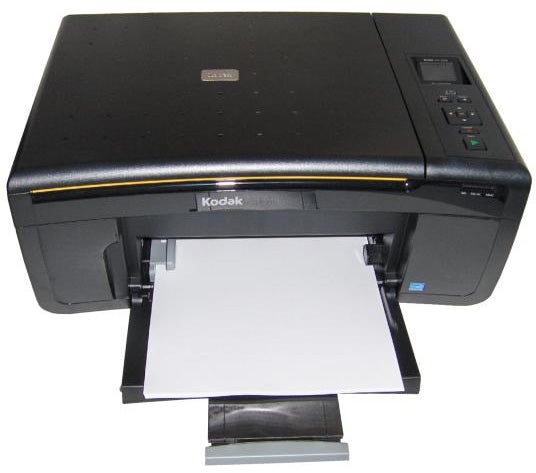 This system is very easy to maintain and the simplicity has helped Kodak keep the consumable costs down, which is has now made its main selling point for the entire all-in-one range. Once the ink cartridges are clipped into place, the machine makes a one-off, automatic calibration print and is then ready to use.

Kodak claims pretty silly speeds for all in its all-in-ones, particularly if you print in normal rather than draft mode. Its top speed is said to be 30ppm for black pages and 29ppm for colour, but our five-page text print took 1:06, a speed of 4.54ppm and the equivalent, five-page text and graphics document took 1:42, or 2.94ppm. The 20-page black text print produced the fastest print of the lot, at 5.11ppm. These speeds aren’t bad for a machine costing under £100, so it’s a shame Kodak has to over-egg the facts with these unrealistic claims. 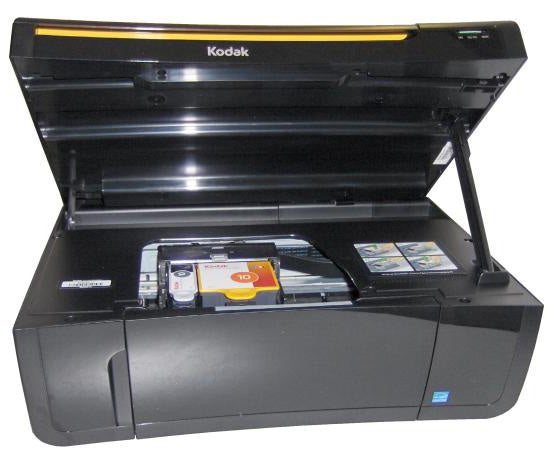 A 15 x 10cm print from a PC took 1:08 and from an SD card, it took 58 seconds. These are good speeds for photo prints and the resulting images are also well up to scratch. There’s plenty of detail in the pictures and colours are natural, if a little dark in areas of shadow. One of the images showed some slight banding, but generally speaking they were better than adequate.


The same goes for graphics on plain paper, though there were signs of under-inking in some areas of solid colour, so the paper fibres showed through, to produce a slight speckling. A colour copy from the 1,200ppi flat-bed was reasonable, though yellow and orange shades appeared a little muddy. Black text is reasonably clean, though we noticed a couple of places where there was print displacement from one pass to the next.


Kodak claims to save you an average of £75 a year on ink, in comparison with its main rivals. This average takes into account differences in usage and doesn’t require you to be printing reams of work every day. Our calculations also show cost improvements. Using the cheapest prices we could find for the two cartridges the ESP 3250 gives costs of 2.65p for an ISO black page and 5.46p for colour, both including VAT and 0.7p for paper.

The relative page costs range from over twice as much as the Kodak ESP 3250, to around 15 percent less. Even though the HP OfficeJet Pro 6500 comes out cheaper to run, it’s also considerably more expensive to buy, so Kodak is justified in claiming its machines run more cheaply than much of its competition.


It’s more of the same, really, with the ESP 3250. There are good and bad elements to this machine, as with the other Kodak ESPs. Print quality is fair, without being spectacular, print speeds are average, though with unrealistic claims and running costs really are cheaper than from similarly-priced alternatives. The colour LCD monitor is worth the extra £10 over the cost of the ESP 3, because of the extra convenience when selecting photos to print.