Hands-on with the Ektra, Kodak’s 1940s throwback smartphone that wants to be your new camera of choice

As the saying goes, “the best camera you have is the one you have on you”. Anyone who owns a DSLR and a mountain of lenses and accessories can attest to how much of a pain carrying the caboodle around can be. That’s why CSC and mirrorless cameras have become so popular.

But for many, their smartphone is still the camera they have with them 99% of the time. For this very reason, camera quality is now often the driving force behind smartphone purchases, and why every smartphone launch now has at least one quantifier for why each has the new best phone camera – looking at you, Google Pixel.

Now, Kodak might not be a company you associate with smartphones, but it’s one you think of when it comes to photography. It’s this nostalgic element that the firm is drawing on for its new Kodak Ektra. For any hardcore camera history buffs, that name might sound familiar, too. It’s actually a legendary model of camera Kodak released way back in 1941, and it’s from this that the company has drawn inspiration.

The new Kodak Ektra has been designed in partnership with design firm, the Bullitt Group, which previously also crafted the CAT S60 smartphone. I spoke to Tim Shepherd, head of applications and market intelligence at Bullitt, about what went into designing the new Ektra with Kodak. 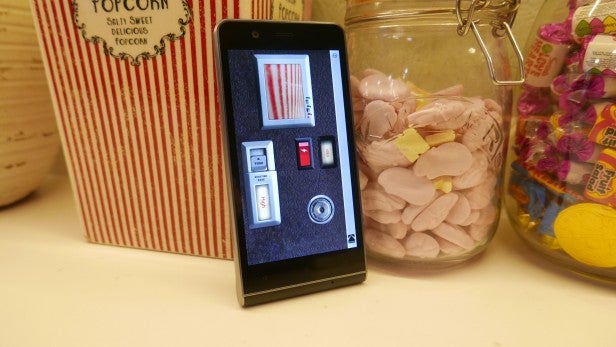 He told me that the Ektra was “as much about lifestyle as technology”, and that applied to its look and feel, which apes traditional cameras with its choice of materials and finish. Shepherd said that the camera is, not surprisingly, aimed at customers who are more passionate about photography.

“They’re not the type who will take a hundred shots to share. They’ll take a more considered approach and might post-process more. They probably already have a dedicated camera.”

As such, many of the controls for the Ektra’s camera will be familiar to anyone who’s held a dedicated camera, right from the on-screen control dial that lets you jump between scene and exposure modes. There’s a little bit of haptic feedback as you rotate the dial to give it some tangibility. 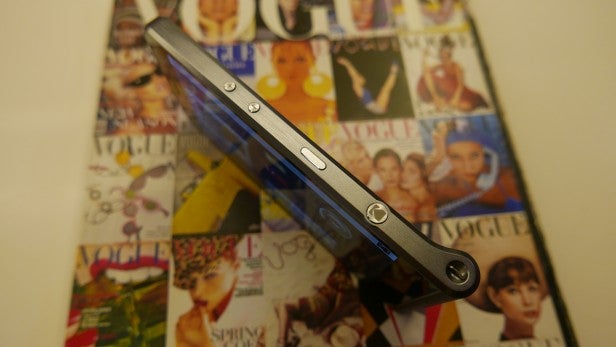 Since image editing is a big part of the photographic experience, Google’s Snapseed app comes pre-installed, and there are shortcuts from the Ektra’s image gallery. It means that, out of the box, you have post-processing tools to make the user experience more seamless. Kodak will also have a widget on the homescreen, where curated photography apps are recommended.

As for the camera hardware itself, there’s a 21-megapixel Sony-made sensor, with an f/2.0 lens. It has a fixed focal length, which came as a slight surprise. Previous camera-first smartphones, such as Panasonic’s DMC-C1 and Samsung’s Galaxy K Zoom, have included optical zoom to bolster their image-capturing capabilities. Having an optical zoom, of course, comes at the expense of size and weight, as well as compromising aperture size. The Ektra manages to maintain the general size of a standard smartphone. 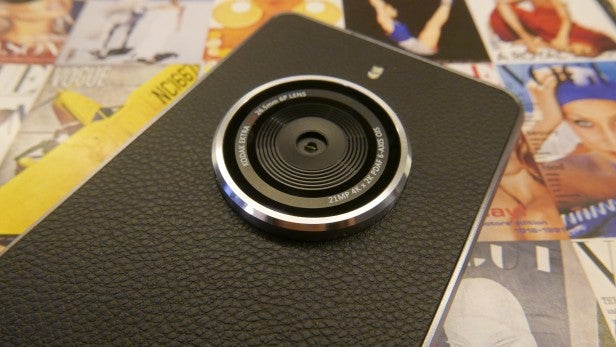 The camera features phase-detection autofocus, as well as 6-axis optical image stabilisation. While f/2.0 doesn’t quite rival the light-gathering capabilities of certain other smartphone cameras, such as the Samsung Galaxy S7 that has an f/1.7 lens, Kodak still claims it will perform well in low-light scenarios thanks to its lens coating, which will allegedly help draw light in rather than refracting it.

For the front-facing selfie camera there’s a 13-megapixel sensor, and the lens has an f/2.2 aperture alongside phase-detection AF.

There’s a software-driven Bokeh mode, which captures two images with two different focus points to simulate the soft background blur of a wide-aperture lens. Other cameras, such as the Huawei P9 or iPhone 7 Plus, have used dual lenses for this purpose, but there’s just the one lens on the Ektra. The Ektra can also capture 4K video, and you can apply vintage filters through its Super 8 video app. 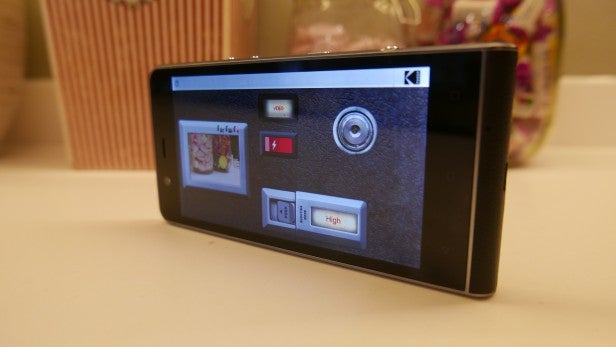 As for the rest of the Ektra’s smartphone specifications, it has a 5-inch 1080p screen, 32GB of storage expandable through microSD, 3GB of RAM and it uses a MediaTek MT6797 Helio X20 Deca-core chip. The Ektra runs on Android 6.0. There’s a 3,000mAh battery inside and the Ektra supports fast charging.

It feels nice in your hands. It’s solidly constructed, and the combination of the leathery rear and metallic sides does make it look and feel like a camera. The lens on the rear does protrude slightly, however, which means the whole phone is resting on it when put on a table. 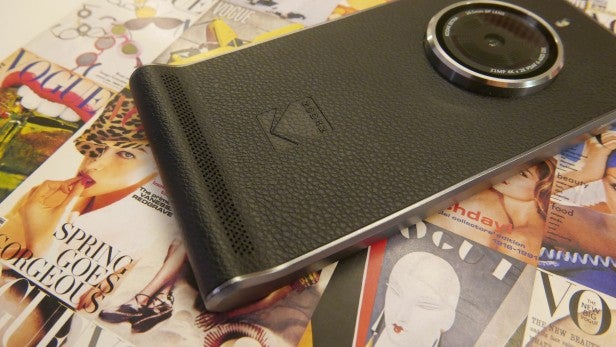 There’s a slight lip to the bottom of the phone, which acts as a handy camera grip, and there’s a dedicated shutter button along the edge, which will make photographers happy. However, during my hands-on time with the device, my palms kept accidentally interacting with the on-screen Android menu buttons due to how you naturally hold the Ektra. This caused me to exit the camera app a few times. 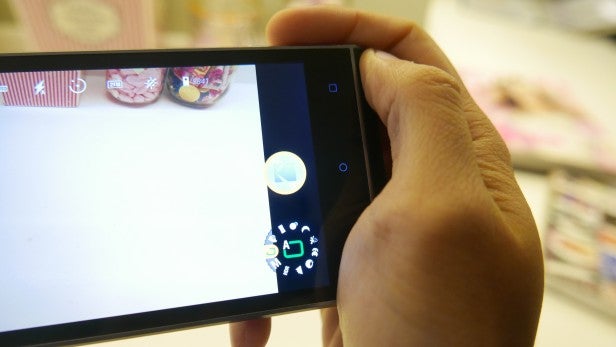 The actual camera app also wasn’t the quickest to respond, although it’s possible this will be ironed out in the final software. Certainly compared to the swiftness of the Google Pixel and iPhone 7’s photo capturing, the Kodak had more shutter lag. Autofocus performance seemed reasonably responsive, at least. The Camera app is well laid out and makes it easy to change settings on the fly. 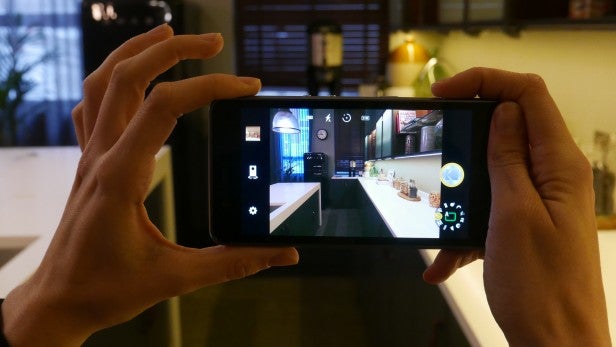 The Kodak Ektra is going to be a rather niche product and, of course, its camera performance will make or break it. It at least still feels like a smartphone, but one with seriously bolstered image-taking capabilities. Previous camera-focused smartphones have felt like cameras that just so happened to be able to make and receive calls – and not even good cameras, either.

I can’t help but feel like the Kodak’s photographic attraction will be limited by a lack of optical zoom, though. Then again, some bona fide photographers do like limiting themselves to prime lenses. 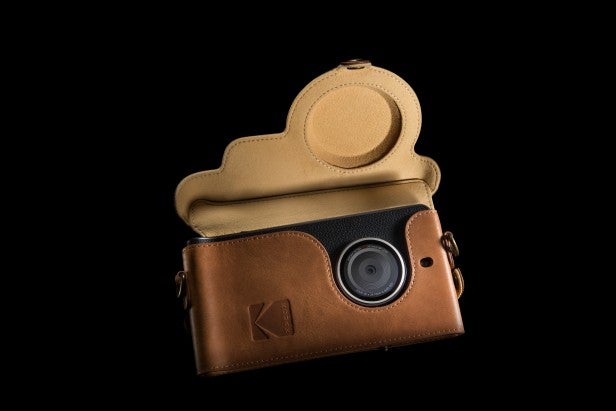 As for its design, I really like its vintage look and feel. It feels great in your hands – provided the niggling palm-rejection problem I encountered is fixed, that is. There will also be a range of leather accessories that will make it feel even more like a camera, including slip cases and proper vintage-style camera covers that look seriously handsome.

The Kodak Ektra will be released in December for £449. Check back nearer the time for a review in which we’ll really put its camera capabilities to the test.