Back in July I reviewed the Kodak EasyShare Z915, a reasonably-priced compact zoom camera featuring a 10x zoom lens and a 10-megapixel sensor. Despite its AA-powered bulk and slightly clunky appearance it was a pretty decent cameras and very good value for money, so it’s not too surprising that Kodak has followed it with another compact zoom, although a rather more sleek and sophisticated offering, today’s review camera the EasyShare Z950. 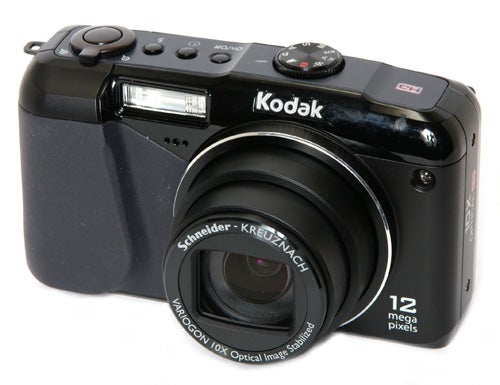 Priced at a competitive £199.99 from Kodak’s own website, but available for under £180 is you shop around online, the Z950 is aimed at the buyer who really wants a Panasonic TZ7 but can’t afford it. The specification is impressive for the price. It features the same compact 10x zoom lens, equivalent to 35-350mm, as the Z915, but with a higher resolution 12-megapixel 1/2.33-inch CCD sensor and a larger three-inch 230k LCD monitor. It has much the same range of features and options as the Z912, but crucially adds the now obligatory HD video recording. 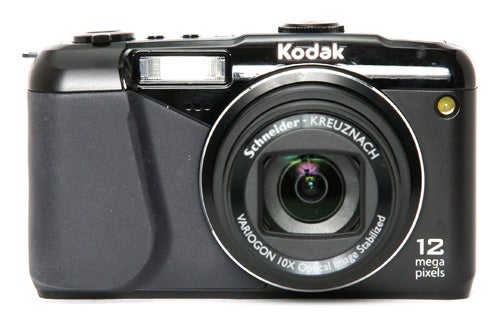 The Z950 has a much more compact-looking body than the Z915. It’s made of plastic of course, but build quality is reasonably good apart from a few creaky joins when squeezed, and a battery hatch with no lock. It lacks the flash turret of the earlier model, making it a little less tall, although in fact it is actually a couple of millimetres wider and pretty much the same thickness. It’s a bit lighter though, thanks to the presence of a lithium-ion rechargeable battery instead of the two AA cells powering the Z915. The body shape is nice and comfortable to hold thanks to a hand-grip on the front and a shaped thumb-grip on the back, both of which are rubber-coated for extra grip. The controls are simple and accessible, with fairly large buttons. This is worth considering if you have limited manual dexterity.

The Z950 is a fairly simple camera but still manages to offer a few advantages not commonly found on compact zoom cameras of this type. Most offer only fully automatic operation, but the Z950 has optional manual exposure, with aperture priority, shutter priority or full manual. The range of control isn’t great, with shutter speeds from 16 seconds to 1/1000th and only three aperture settings, but it’s better than nothing and does at least offer some potential for more creative photography. 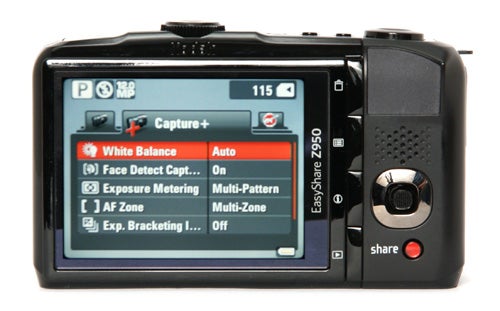 In manual and program auto modes the camera is controlled via a series of icons along the bottom of the screen, adjusted by the small joystick that the camera has in place of a D-pad. It’s a quick and easy-to-use system, and again would be ideal for someone who finds the usual D-pad and tiny buttons difficult to use. It’s even fairly easy to use while wearing cloves.


The main menu is very short, and offers only the most basic options, including metering modes, AF zone, white balance and exposure bracketing. Bizarrely it also offers adjustable sharpness, but colour control options are limited to high or low saturation and monochrome.


As well as this the Z950 offers all the usual automatic amenities, including program auto, scene mode with 19 scene programs including face detection in portrait mode. The is also an intelligent auto mode, which automatically selects the correct scene program. 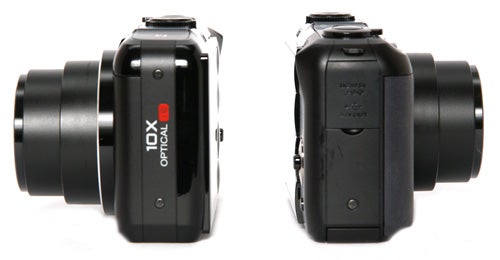 The Z950 is equipped with Kodak’s optical image stabilisation system. Kodak makes no particular claims about the number of stops of extra stability, but I found that at full zoom it would reliably capture sharp images at shutter speeds as low as 1/30th of a second, which is an advantage of about three and a half stops, pretty impressive stuff for what is supposed to be a budget camera.


The video mode is also a cut above the average. It can shoot a resolution of 1280 x 720 pixels at 30fps. Audio recording is monaural only, but unusually for a compact camera the optical zoom can be used while recording. The zoom motor is very quiet and can barely be heard on the soundtrack. The zoom control itself is very smooth in both video and still shooting modes, making it nice and easy to frame and compose shots.

So far then the Z950 is looking like a pretty decent camera, with a good range of features for the price. However next we come to performance, and that’s where it all goes horribly wrong. It starts up briskly enough in well under three seconds, and in single-shot mode it appears at first to operate quickly and smoothly. For the first three shots the shot-to-shot time is approximately 1.2 seconds, which is nice and quick, but then it runs into a wall. When you try to take a fourth shot, instead you get a message saying “Processing…” on the screen, and then you have to wait. It takes 8.5 seconds before you can take another picture, and an absolutely ridiculous 25 seconds to completely empty the buffer. I thought that maybe it was a memory card problem, so I tried it with the latest ultra-fast class 10 SDHC card, at got exactly the same result. Not too surprisingly considering, there is no continuous shooting mode. This is a very, very slow camera. 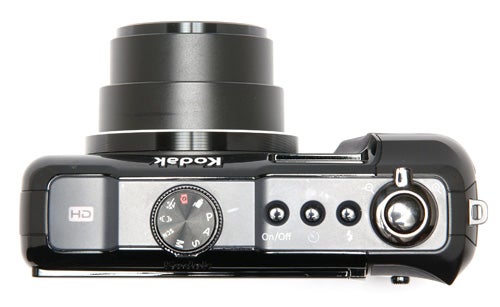 It’s even more annoying, because the autofocus system is actually very good. It’s not exactly lightning-quick, but it’s fast enough and works exceptionally well in low light, even at full zoom, thanks to a very bright AF assist lamp. This is the exact opposite of the Z915, which had excellent overall performance, but a slow autofocus system. Perhaps Kodak could somehow combine the two cameras and produce one good one?


In terms of image quality the Z950 is very similar to the Z915, and has similar problems. The Schneider-Kreuznach lens still produces significant barrel distortion at wide angle, but has good edge-to-edge sharpness. Colour rendition in standard mode is fairly neutral and records bright colours without distortion. Dynamic range is pretty limited, as is usually the case with 12MP compacts. Noise control is genrally good, producing usable images up to 400 ISO, although detail does fade into the pixel-binning at 800 and 1600. The main image quality problem plaguing the Z950 is exactly the same as the Z912 and most of Kodak’s other cameras; that of severe over-compression. File sizes average around 2.5MB, which is ridiculous for a 12MP camera, resulting in compression artefacts and poor rendition of fine detail. 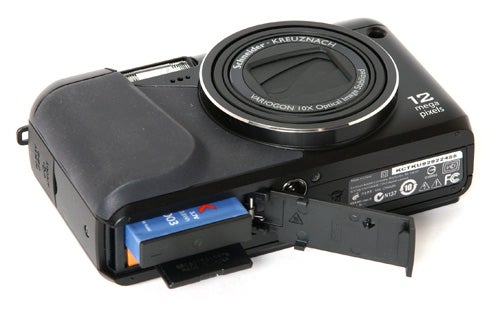 The Z950 could have been a really good camera. It has decent build quality, looks good and handles well, with accessible controls. It has optional manual exposure features that others in its class lack, and the HD video with optical zoom is a nice extra. It’s a real shame that it’s let down so badly by extremely slow performance. 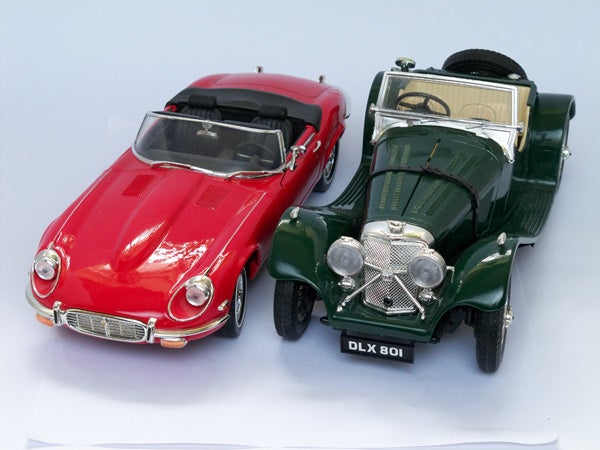 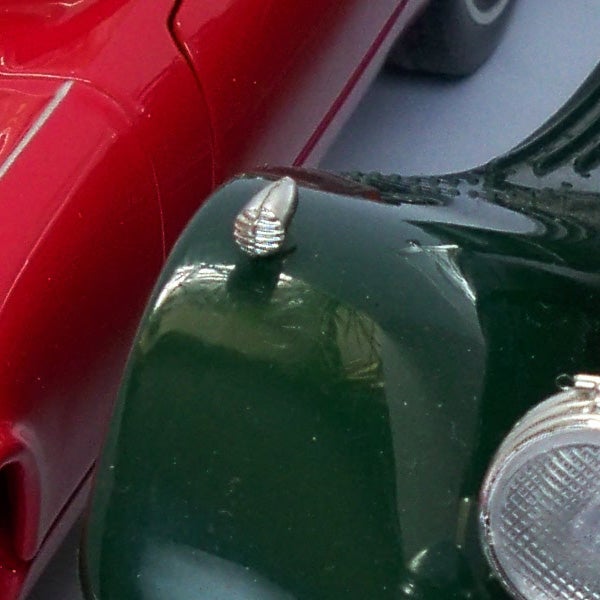 Picture quality is good at the lowest setting, with nice smooth colours. 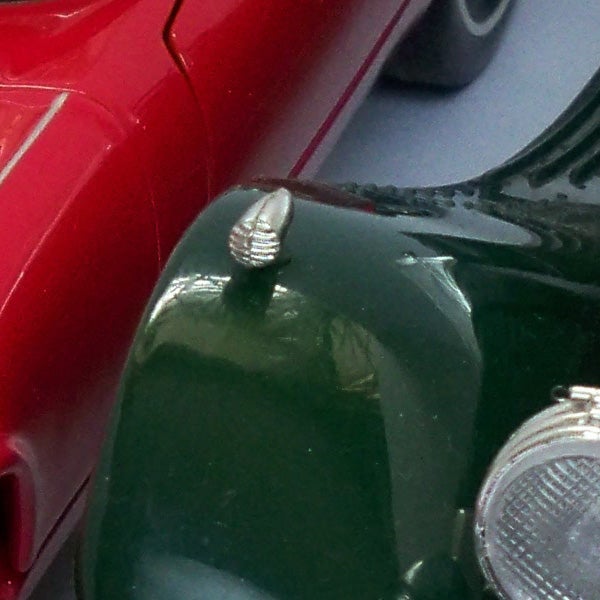 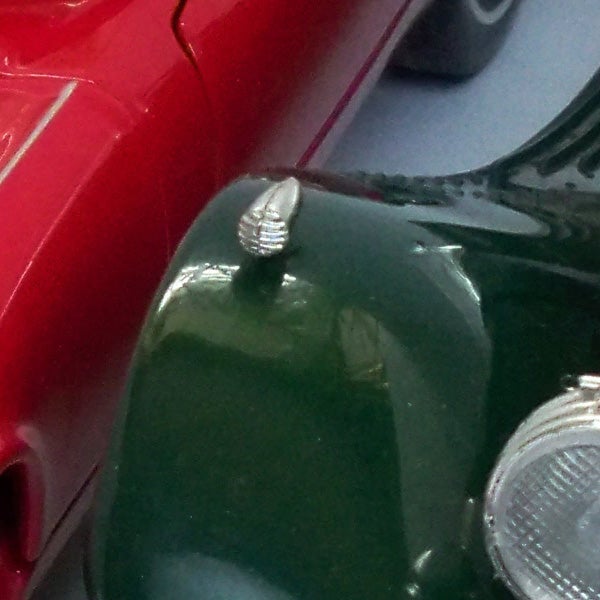 The noise reduction at 400 ISO has blurred some fine detail, but overall quality is still good. 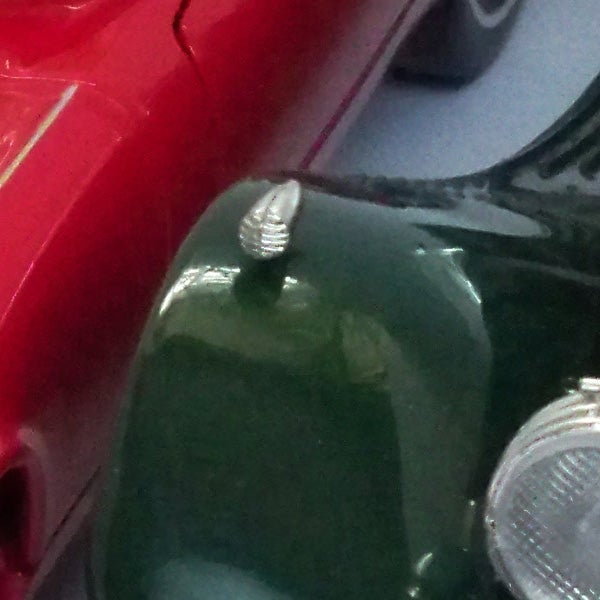 More detail is lost at 800 ISO, but the image is usable for small prints or websites. 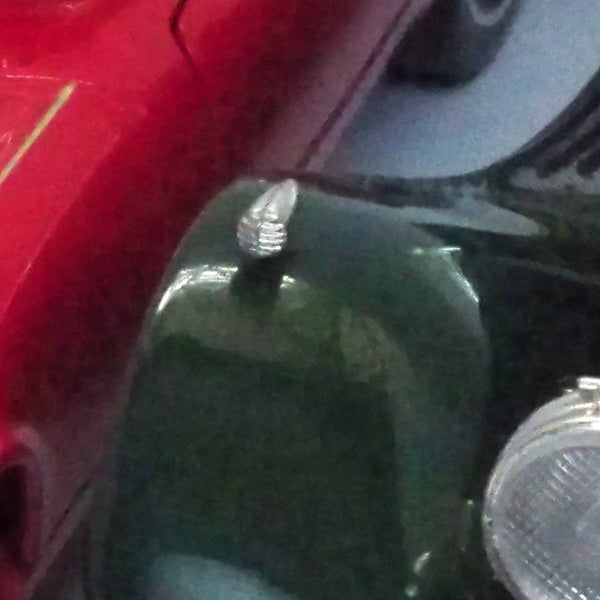 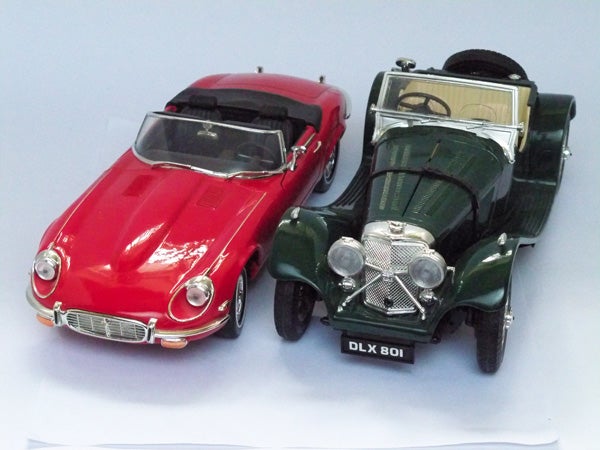 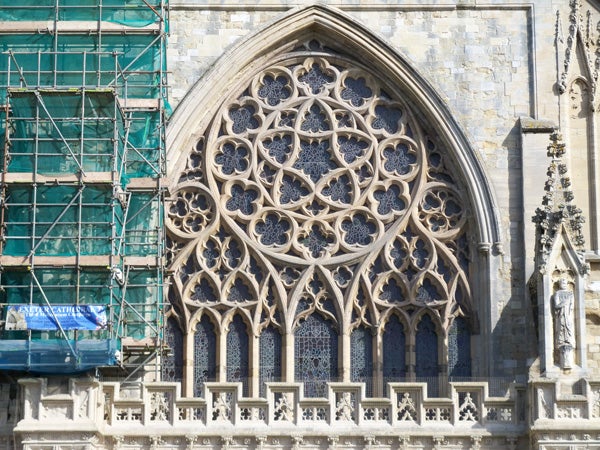 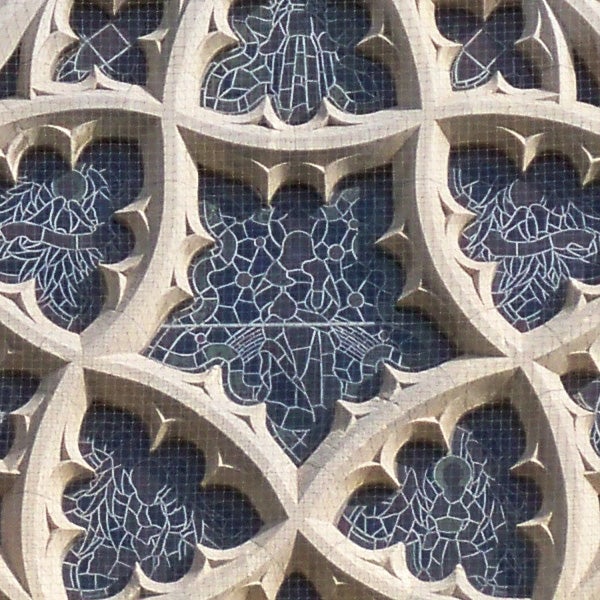 The detail is nice and sharp, but the strong image compression has done it no favours. 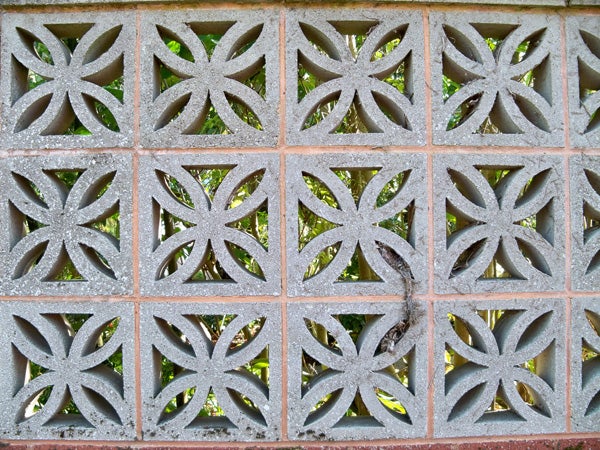 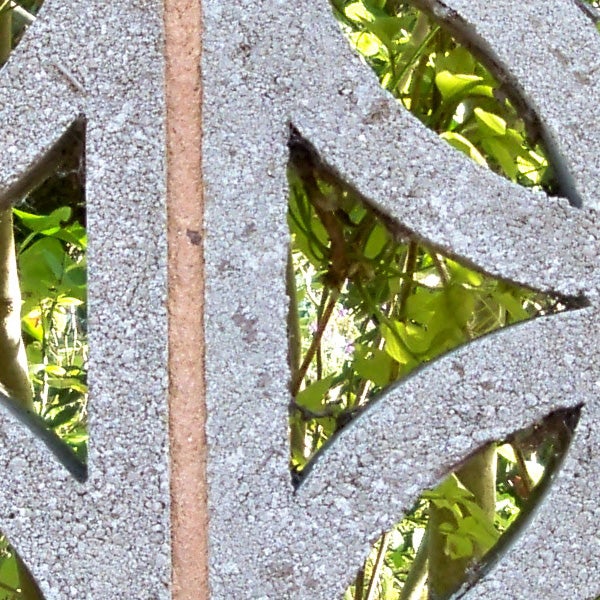 Centre sharpness is pretty good though. 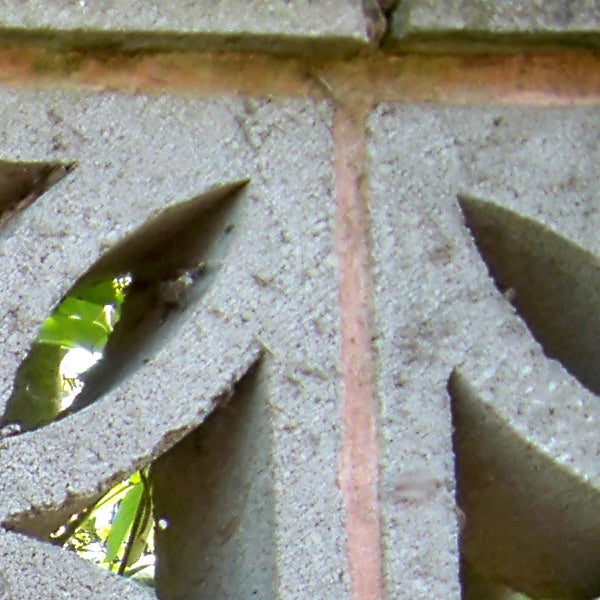 Corner sharpness isn’t too bad either. 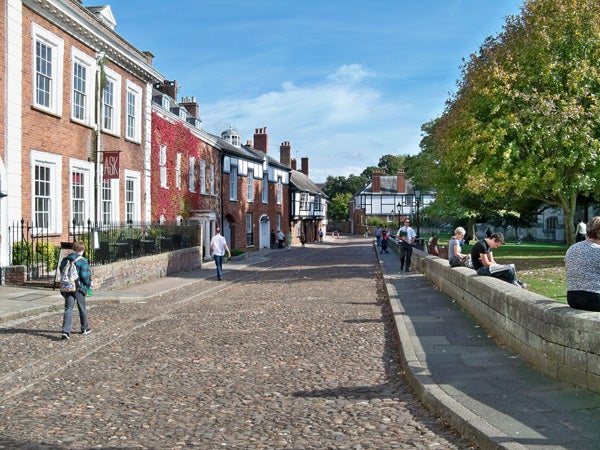 Wide angle is equivalent to 35mm. 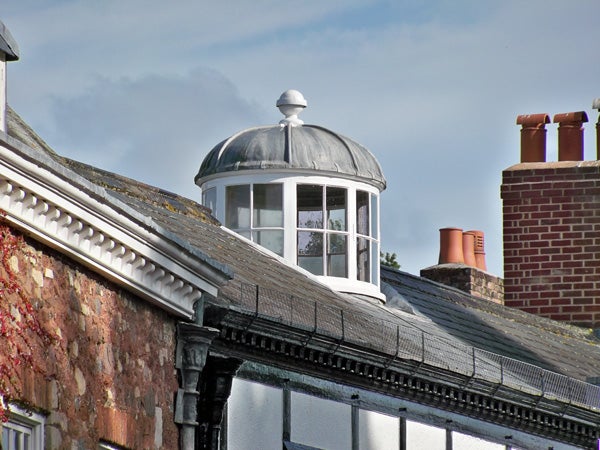 Telephoto is equivalent to 350mm. 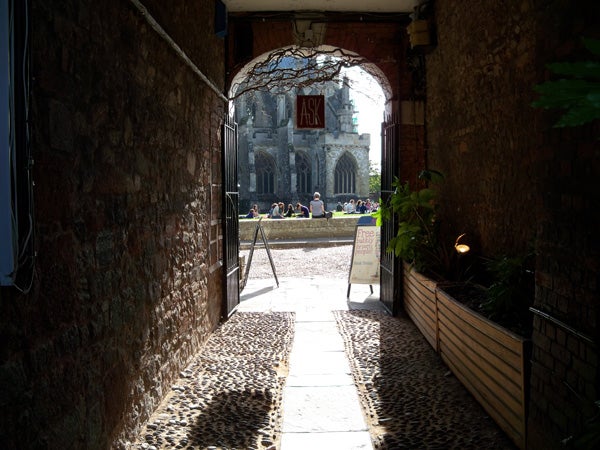 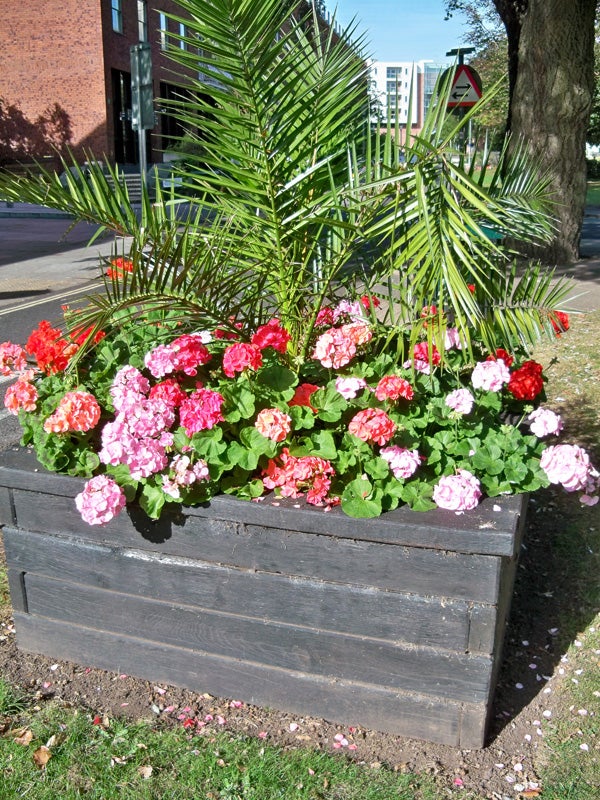 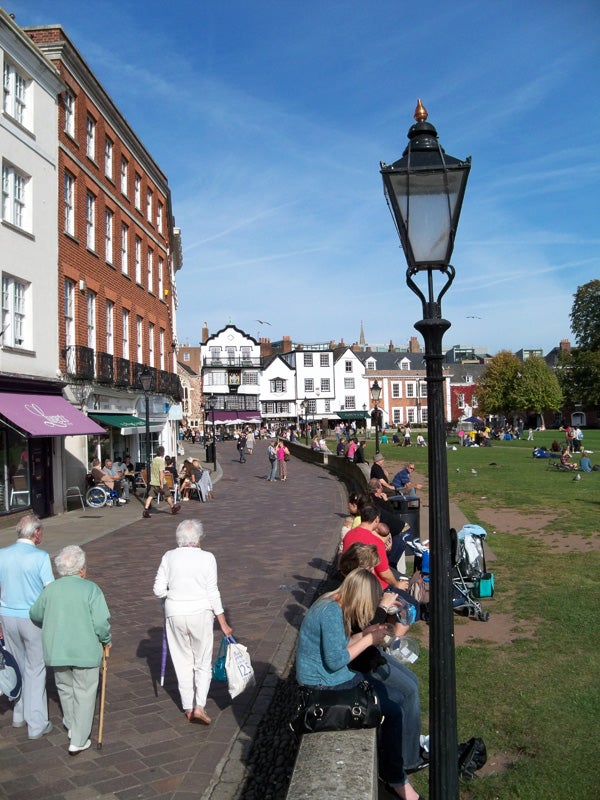 The Z950 is a good general snapshot camera, although very, very slow.