Back in September I reviewed the Kodak EasyShare Z650, a reasonably priced 6.1-megapixel superzoom snapshot camera. I was fairly impressed by its handling and image quality, and although it had some fairly serious flaws, such as slow performance, no image stabilization and a terrible 11fps VGA video mode, I awarded it an above-average 7/10 overall.


This week, moving up one step in Kodak’s EasyShare range, I’m taking a look at the Z710. It has an extra megapixel of resolution and costs around £50 more, so it should be a much better camera, right? Wrong. Very wrong in fact, in several important ways. 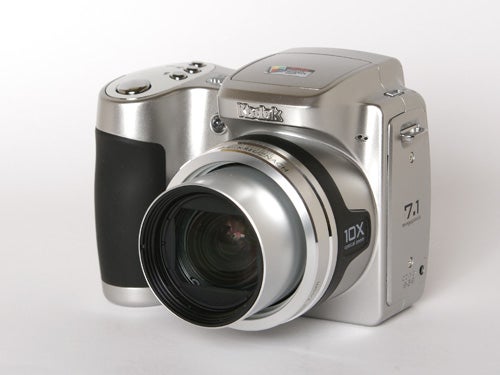 At first glance it’s hard to tell the two cameras apart. They share the same body design and control layout, and look identical apart from the “7.1 megapixels” emblazoned on the side. The Z710 has the same 10x zoom, 38-380mm equivalent lens, the same 2in, 115,000 pixel “indoor/outdoor” monitor and the same rather limited set of features.


It also shares the Z650’s control layout and menu system. There is a large illuminated mode dial on the back surrounding a simple joystick-type menu controller. The camera isn’t exactly overburdened with features and options, but it does offer full manual, aperture priority and shutter priority exposure control with a good range of settings. It also has sport, portrait and night program modes, as well as fourteen scene modes. Other functions such as the two-speed self timer, macro or infinity focusing and flash modes all have their own buttons, and exposure compensation is controlled via the joystick. 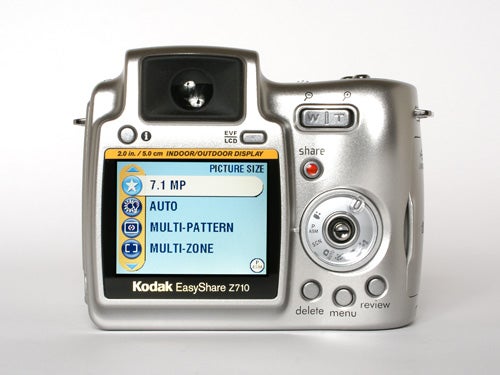 It is very simple and intuitive to operate, which is really just as well, because it only comes with a basic 23-page “Getting Started” manual. For the full user guide you have to go to Kodak’s website and either view it in your web browser or download it as a PDF and print it yourself. I thought Canon was pretty slack with its CD-ROM manuals, but this is just plain lazy.


Although the Z710 is externally almost identical to the Z650, there are several differences on the inside. The Z710 features a 7.1 megapixel 1/2.5in CCD. This is the same small physical size as the sensor in the Z650, but Kodak has squeezed an extra million photosensors onto it – an increase of 16 per cent. In doing so Kodak has demonstrated why this is often not a very good idea.

Putting more photosensors in the same area means that the individual sensors have to be smaller, and smaller sensors are less sensitive to light. This means that to get an image out of them you have to apply more signal amplification, which means more image noise. Ironically adding more megapixels can mean a reduction in image quality, because the individual sensors are not as good at detecting subtle variations in shade and colour, and so lack the ability to differentiate fine detail. This is very much the case with the Z710. 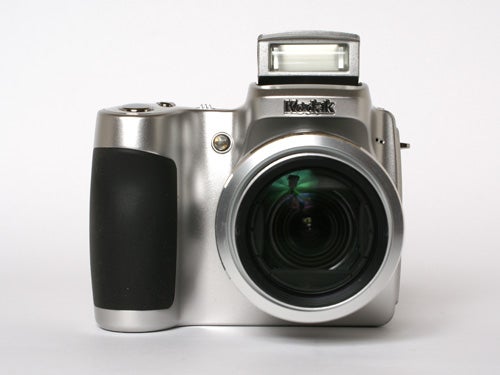 The extra electronics inside also seems to have had a negative impact on the camera’s overall performance. It takes a very slow 4.5 seconds to start up, which is about twice as long as most modern cameras, and slower even than some cameras with larger lenses including Kodak’s own P712. It also takes around four seconds to shut down when switched off. 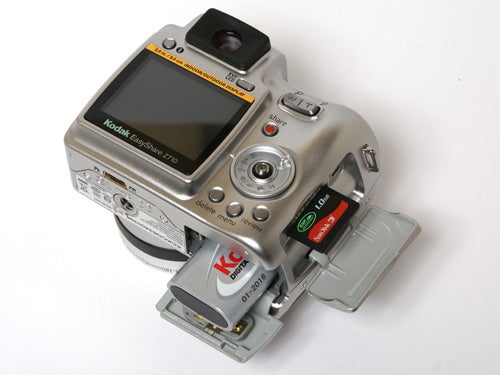 A more sensible idea, and one which I’ve seen implemented on other cameras, would be for the flash to pop up automatically if needed only when the camera is in Auto mode, however the Z710 doesn’t do this. If you need the flash and it isn’t open, you have to open it manually using a separate switch. Believe me, when a camera has as little going for it as the Kodak Z710, an extra annoyance is the last thing it needs.


Speaking of annoyances, I must also mention the Z710’s electronic viewfinder. It is quite simply the worst I’ve ever used. It appeared to be slightly out of focus, with eye-watering blue/green fringes all around the edges. Using it for just a few minutes gave me eye strain and a headache. It has no focusing adjustment, so it was pretty much unusable.


There are two continuous shooting modes which operate at just under two frames a second, but one only saves the first three frames while the other saves the last three. There is no unlimited continuous mode. 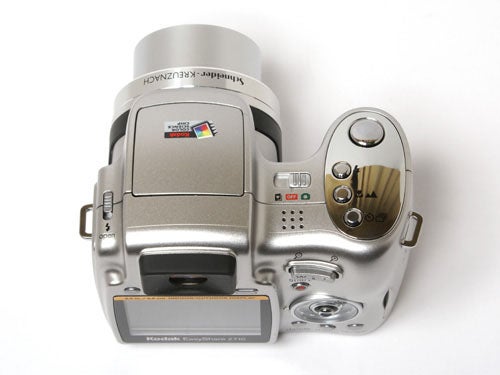 In single shot mode the performance is equally dismal. Taking a sequence of shots it can shoot the first three in about five seconds, but then has to pause for several seconds to write data to the memory card before you can shoot again. Shooting five shots takes over twenty seconds.


This is doubly annoying because the AF system is actually quite good. In normal light if focuses very quickly and accurately, and thanks to a decent AF light it can focus in complete darkness at a range of several metres.

As I mentioned, the video mode is very poor. The Z650 could only manage 11 frames a second at VGA resolution, which was bad enough, but the Z710 is even slower, with a maximum of 10.5 frames a second. The result is incredibly jerky and looks terrible. Even at QVGA resolution (320 x 240 pixels) it can only manage 20fps. Needless to say the zoom lens cannot be used in video mode. 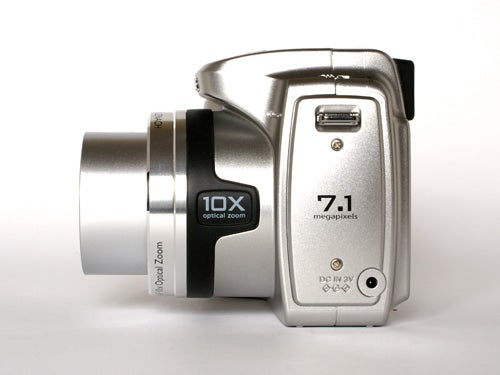 So, about that picture quality. I was fairly impressed by the results from the Z650, so I was hoping that it would be the saving grace of the Z710 too. Sadly this is not the case. Colours, especially yellows, were over saturated, the lens suffered from major chromatic aberration at the telephoto end and barrel distortion at the wide end and images generally lacked contrast, although to be fair the weather wasn’t very good when I did most of my test shots. Noise control at 64 ISO was, it has to be said, very good, and wasn’t too bad at higher settings, although with a maximum ISO of only 400 that’s not saying much. However the lack of fine detail when images were examined at full size was damning. I’ve seen 4-megapixel cameras that were better at discriminating fine lines. 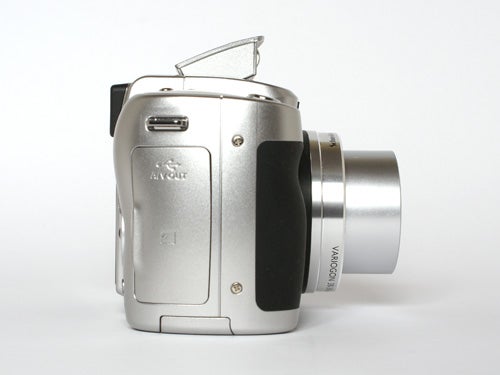 The images were noticeably less sharp than those produced by the 6-megapixel Z650. Add to this the lack of image stabilisation or high-ISO performance, making the telephoto end of the zoom range useless without a tripod and I’m afraid I cannot recommend the Z710 on any count. 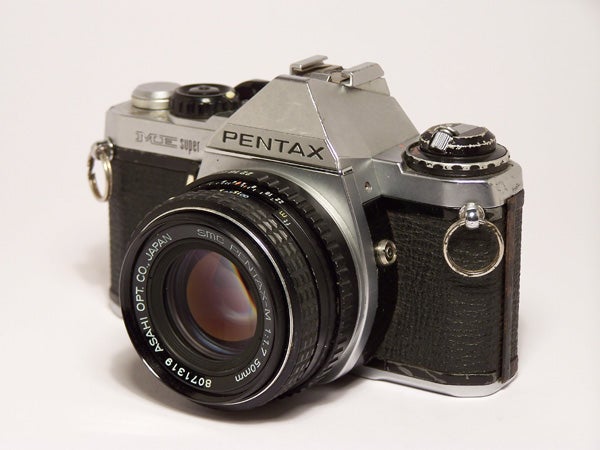 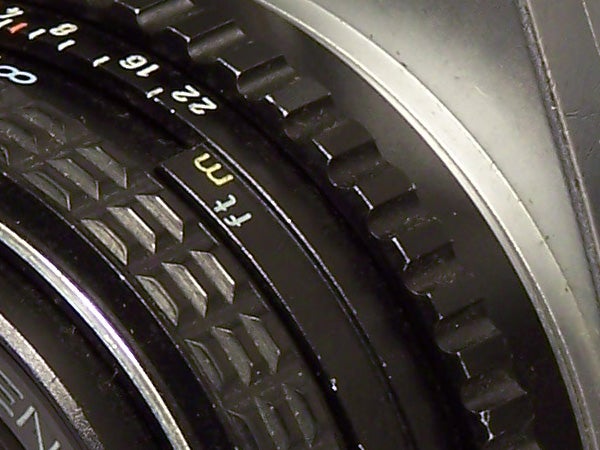 At the minimum ISO setting there is no visible image noise, and the shot is nice and smooth with reasonable detail, although there is some sign of over sharpening. 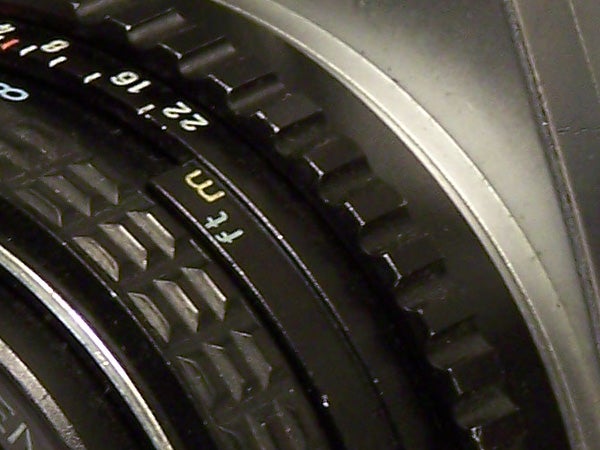 Just 1/3rd of a stop higher at 100 ISO and there are patches of random colour in the darker areas, and less fine detail. Noise is under control though. 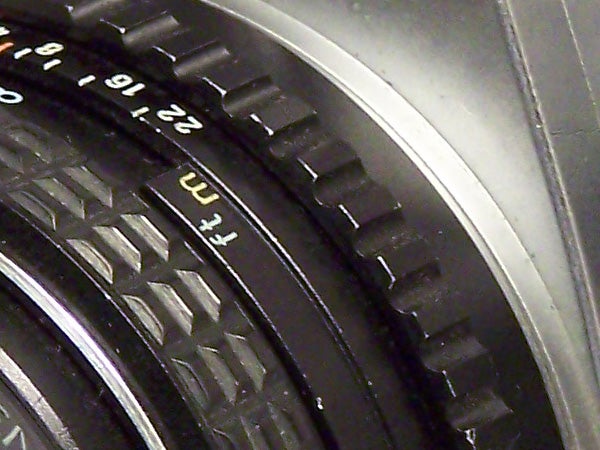 At 200 ISO the random colour distortion is more noticeable, as are the effects of the noise reduction system. The image looks over-processed and there is a loss of fine detail. 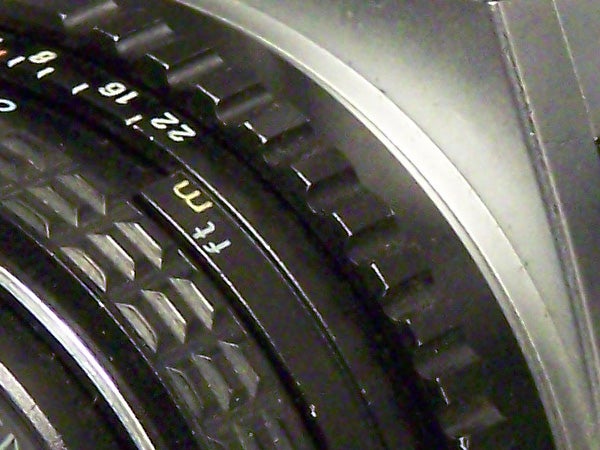 At the maximum ISO setting of 400 the colour distortion has spread into the lighter areas too, and the distinction between mid-tone areas has been smeared out by the noise reduction system. 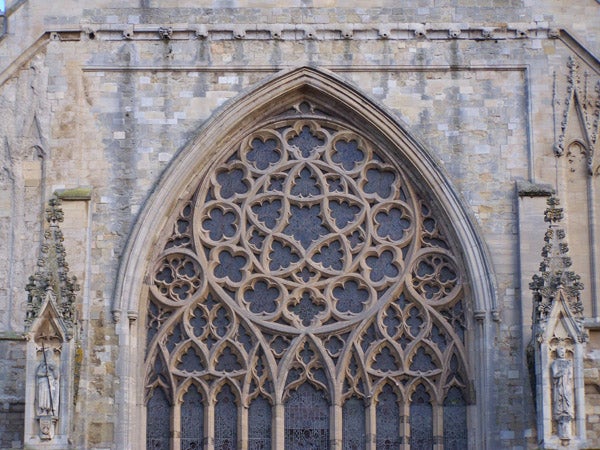 I’m sure you’re all sick of seeing the front window of the cathedral, so I’ll try to find another detail shot for next time. 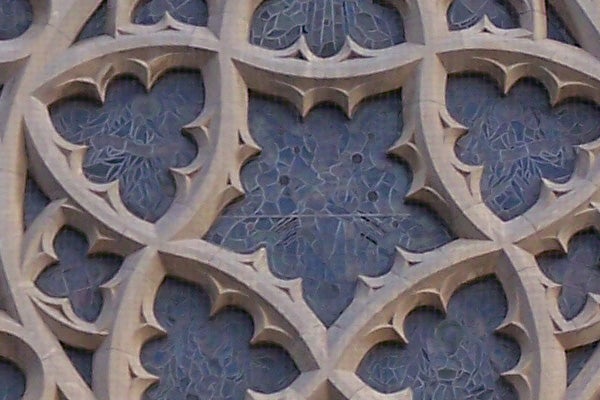 Here’s a crop from the above image showing it at full magnification. Compare this to the similar shot I took with the Z650. The level of detail is very low for a 7MP camera. 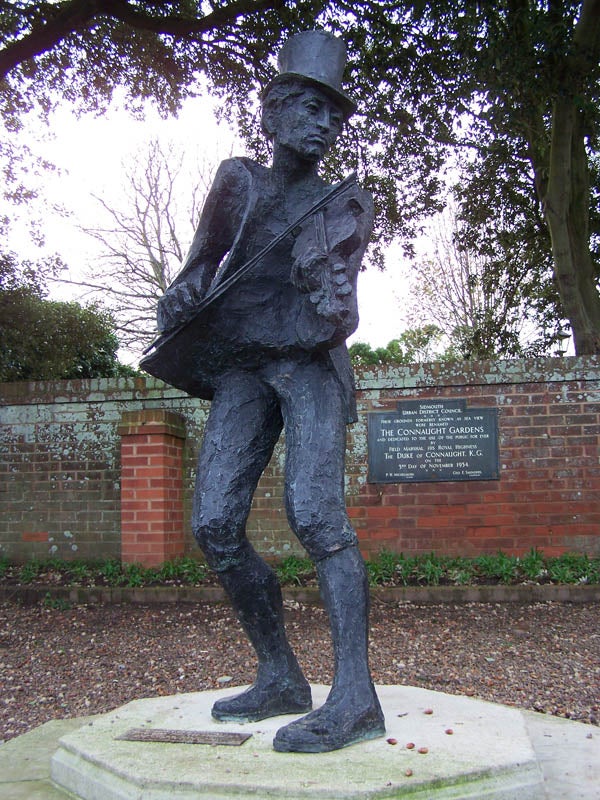 Shooting into the light and using fill-in flash to lighten the shadows, this shot shows massive purple fringing around the burned-out sky, a common problem with small over-powered sensors. 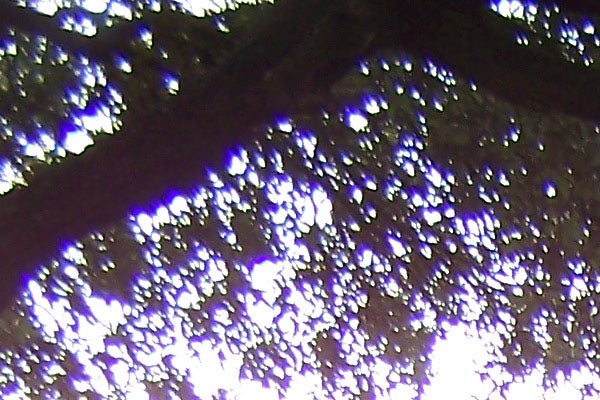 This is a 100% crop of the above image. You can clearly see the massive purple fringing on the high-contrast edge. 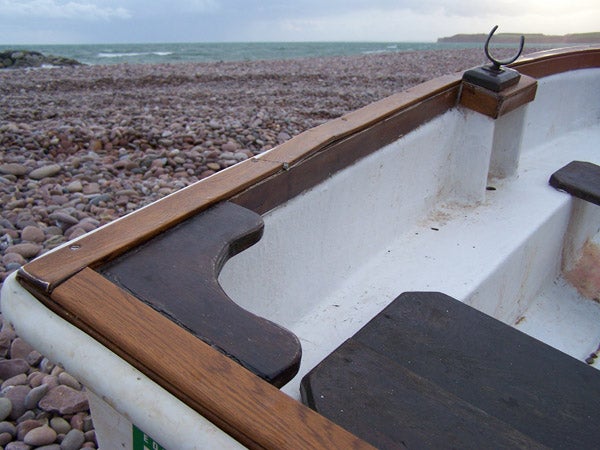 The barrel distortion is even more noticeable in this shot. If the horizon was really that curved the Earth would only be about 30 miles in diameter. 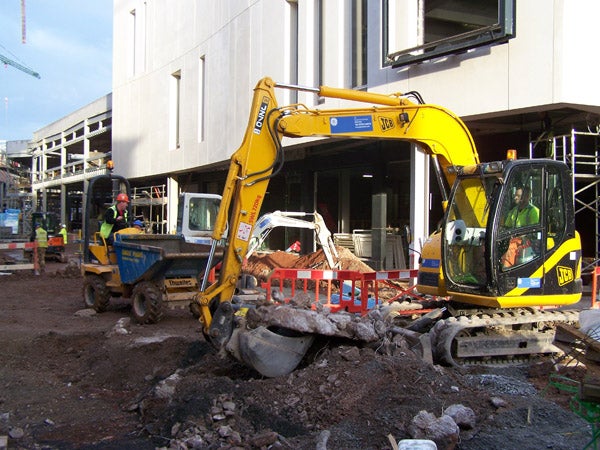 While the overall exposure is good, the bright yellow on the boom of the digger is very over-saturated, causing it to lose texture and detail. 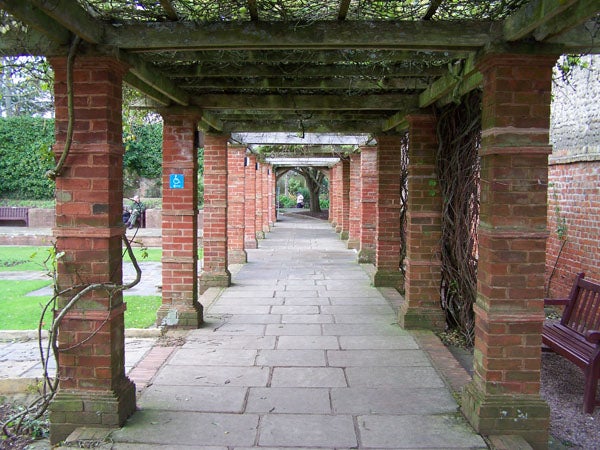 At the wide angle end there is fairly significant barrel distortion. I’m beginning to think that these Schneider-Kreuznach lenses aren’t as good as they used to be. 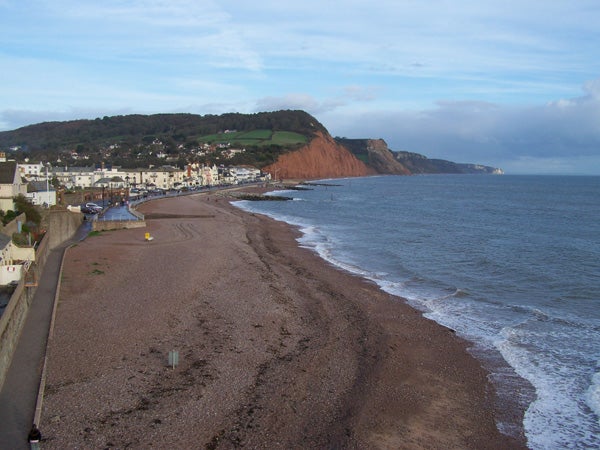 The 38mm-equivalent focal length at the wide angle end of the Z710’s 10x zoom really captures the warmth and hospitality of Sidmouth in the middle of winter. 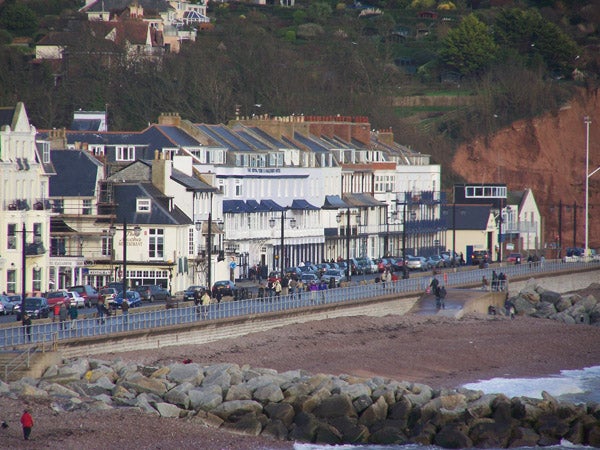 At the telephoto end of the zoom range, we find that the supposed quality of the Schneider-Kreuznach lens isn’t all it’s cracked up to be, with low contrast and significant chromatic aberration around the edges of the frame.