For better or worse, all of the major camera manufacturers have now introduced 12-megapixel compact models. I’ve already reviewed a couple of them, such as the Casio Exilim EX-Z1200, and the Sony Cyber-shot DSC-W200, and to be honest they weren’t as bad as I’d feared. Yes, they both suffer from restricted dynamic range and image noise at higher ISO settings, and neither offer any real advantage over equivalent 10-megapixel models, but they are both very good cameras in their own right. 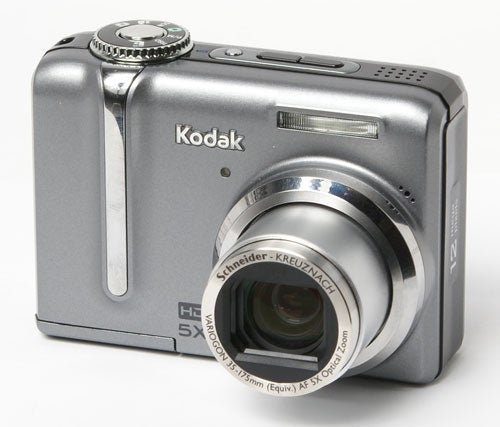 Kodak now has three 12-megapixel models in its compact camera range, and the latest one is this, the EasyShare Z1275. It is basically a higher resolution version of the 8-megapixel Z885 launched back in March of this year. The Z1275 features a 5x zoom, f/2.8-5.1 Schneider-Kreuznach Variogon lens, a 2.5-inch LCD monitor and optional manual exposure. On paper at least it sounds pretty impressive. 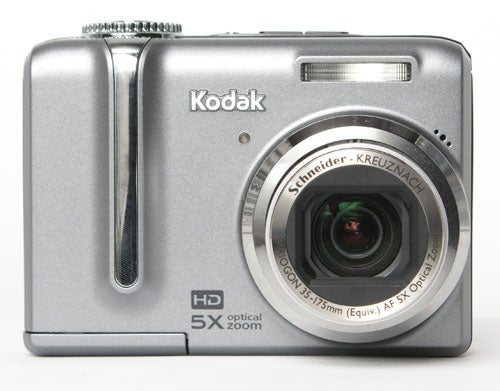 The Z1275 is a fairly large and heavy camera by compact standards, measuring a substantial 89.5 × 64.5 × 31.6 mm and tipping the scales at 161g without batteries. Since it runs on two AA cells, this means that the total weight can be as high as 210g, so this isn’t a camera that’s going to sit comfortably in your shirt pocket. Despite this weight the camera body is made of plastic, and it’s not the toughest or most rigid structure I’ve ever seen. Parts of the body flex and creak when squeezed, and although it does look nice in two-tone metallic grey and black, I have to say it feels a bit cheap. In fact it is fairly cheap in relation to the other 12MP models on the market, costing around £160 at retail, compared to £176 for the Casio Z1200 or £190 for the Sony W200.

Unfortunately this lower price means that the Z1275 is lacking a couple of features that I would have expected to see. It has a longer-than-average 5x zoom lens with a telephoto end equivalent to 175mm, but unlike most recent cameras with longer lenses it has no mechanical image stabilisation, only a so-called “digital image stabilisation” system, which basically means it bumps up the ISO setting to 1600, with all the image noise problems that usually entails. Almost uniquely for a recent camera it also has no face detection system. I have frequently stated that I don’t consider this feature to be particularly useful anyway, but I’m so used to seeing it that it’s significant that the Z1275 doesn’t have it. 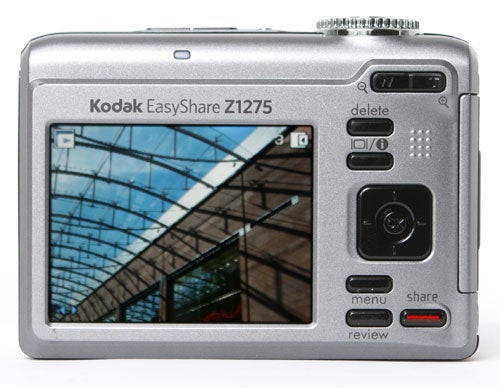 Other features reflect the cost-cutting that has taken place in the design of this camera. The 2.5-inch monitor screen has a resolution of only 115k pixels, which is pretty low, and the usefulness of the extended zoom range is restricted by the fact that it is stepped in six fairly large increments, so you’ll be doing a lot of moving backwards and forwards if you like to frame your shots accurately. The Z1275 does have a degree of manual control, but the manual exposure mode allows only three possible aperture settings (minimum, maximum and a mid-point) and the shutter has a maximum speed of only 1/1000th of a second. It also has optional manual focus with automatic monitor magnification, but with such a low-res monitor it is a rather hit-or-miss affair. 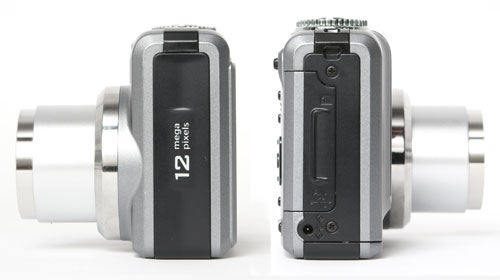 One feature that does set the Z1275 apart from most other digital compacts is its video mode, which can shoot 1280 x 768 resolution at 30 frames a second, compatible with the high definition (HD) television standard. Unusually the zoom lens can be used during video shooting, but the zoom motor can be clearly heard on the soundtrack. In this setting a 1 gigabyte memory card will only provide 14.5 minutes of video shooting, so you’d better buy a few larger cards. I did notice something a bit odd however. I tried the camera with a 4GB SDHC card, but the shooting timer only seemed to think it was a 2GB card, providing just over 29 minutes of shooting.

The camera’s overall performance is somewhat disappointing. It takes nearly five seconds to start up, and in single-shot mode it takes an average of around 4.4 seconds between shots. In the camera’s specification on Kodak’s website it claims 1.6 seconds as the shot-to-shot time, but I don’t know where they get this from. Even the first two shots take nearly three seconds, and the delay gets longer the more shots you take, as the buffer can’t write to even a high-speed memory card fast enough to keep up. In continuous mode the camera fires a burst of up to three shots at approximately 1.2 shots per second, again significantly slower than the manufacturers claim of 1.7fps, but the buffer then takes over seven seconds to write to a high-speed memory card. With a slower card it can take over 11 seconds before you can continue shooting. 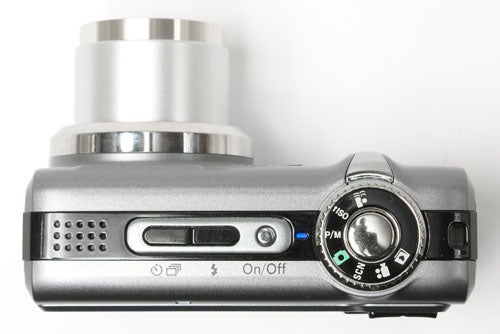 Unfortunately the sluggish performance was far from being the most damning problem that I encountered while testing the Z1275. Several times while I was out shooting, the camera suddenly locked up for no apparent reason just as the shutter button was pressed, with the screen going blank and none of the controls responding, and it had to be switched off and then on again to restore operation. And before some bright spark writes in to tell me that cameras have a ‘sleep mode’, it wasn’t that. The camera had a major technical problem which caused it to crash repeatedly. The pictures taken at the moment when this occurred were corrupted, and attempting to view them resulted in an “unknown file format” error message. It may be that this was a problem only with my review unit, and is not a general fault with the model, but the fact that it occurred at all in a brand new camera is very worrying. 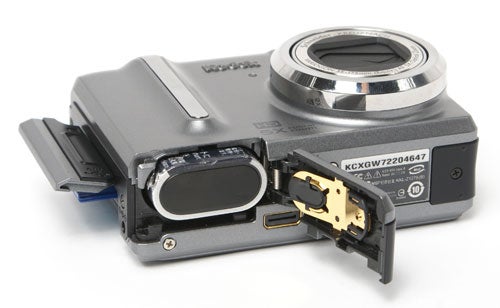 This is a great pity, because like the other 12MP cameras I’ve tested, under the right circumstances the Z1275 is capable of producing good picture quality. As always, Kodak’s colour reproduction is flawless in good light, and the Schneider-Kreuznach lens also lives up to its reputation, producing excellent clarity from edge to edge with very little distortion at wide angle, and only a tiny hint of chromatic aberration at the very edges of the frame. However the 1/1.72-inch 12.4 megapixel CCD does suffer from limited dynamic range, clipping highlights and losing shadow detail in high-contrast shots. Image noise is also a significant problem, with colour speckling visible even on shots at the minimum ISO 64 setting. The rather severe file compression further reduced image quality. In order to save storage space the big 4000 x 3000 pixel images are very heavily compressed, with file sizes averaging around three megabytes, about what I’d expect from a six or seven megapixel camera. As a result compression artefacts are visible on many images.

The Kodak EasyShare Z1275 is a camera with a number of problems and few saving graces. It is heavy and bulky for a compact, build quality is below average, it lacks any real image stabilisation for its longer-than-average zoom range, and its performance and image quality are well below par. The HD video mode is potentially useful, the lens is very good and the asking price is relatively low for a 12MP camera, but I’m afraid that isn’t enough to save it. The possibility of a crippling technical problem is the final nail in the coffin. 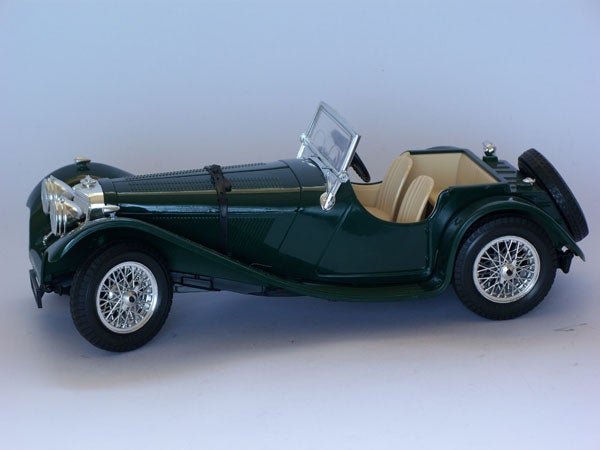 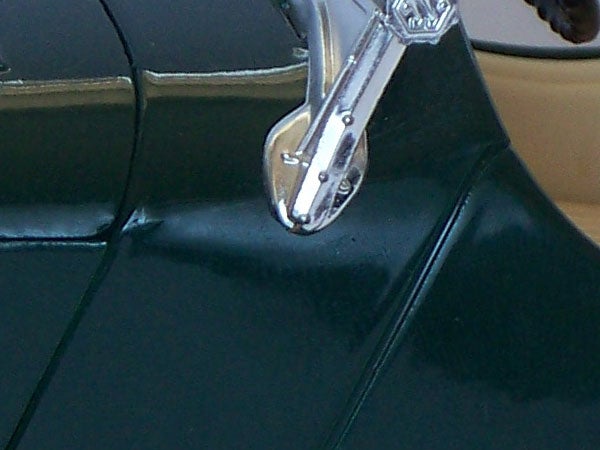 Even at the minimum ISO 64 there is some colour noise visible, as well as compression artefacts. 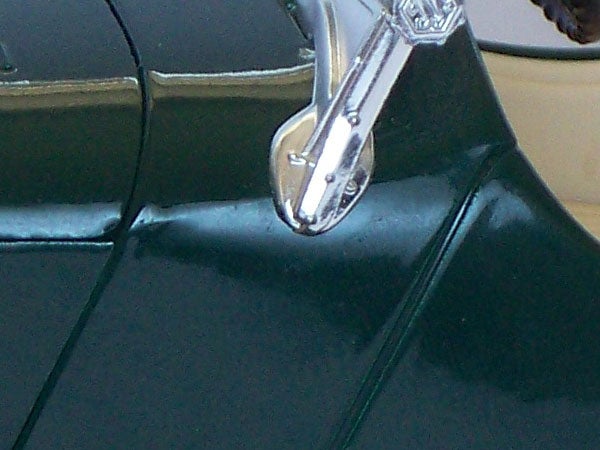 Both noise and compression are more visible at ISO 100. 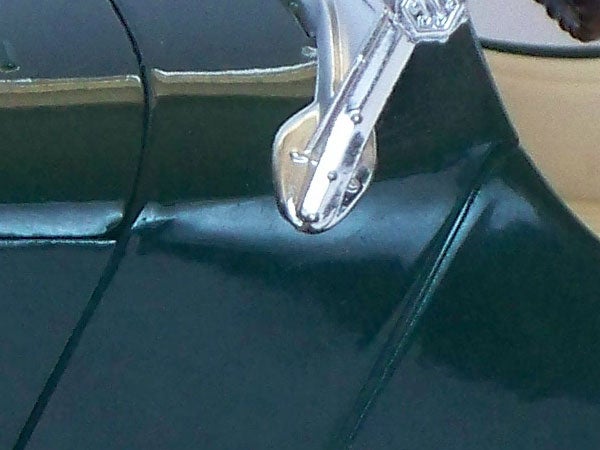 Noise reduction has cleaned up some of the colour speckling at ISO 200, but there are still patches of distorted colour. 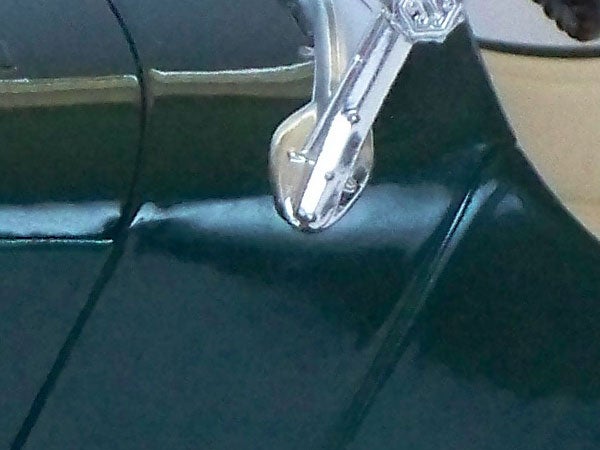 At ISO 400 the noise reduction is starting to blur out the fine details. 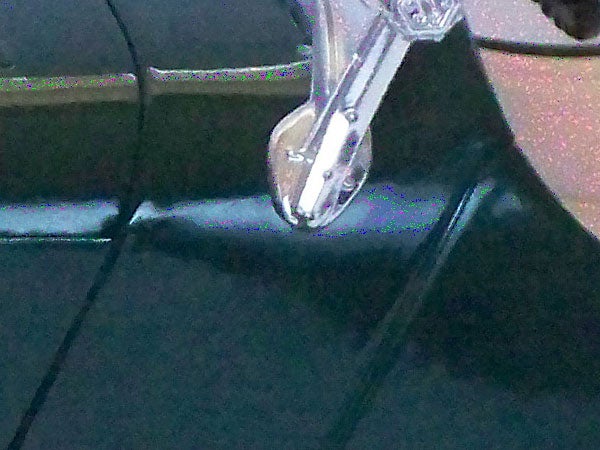 At ISO 800 the shot is suddenly marred by some bizarre colour distortions. I’ve included the full image below to show the effects. 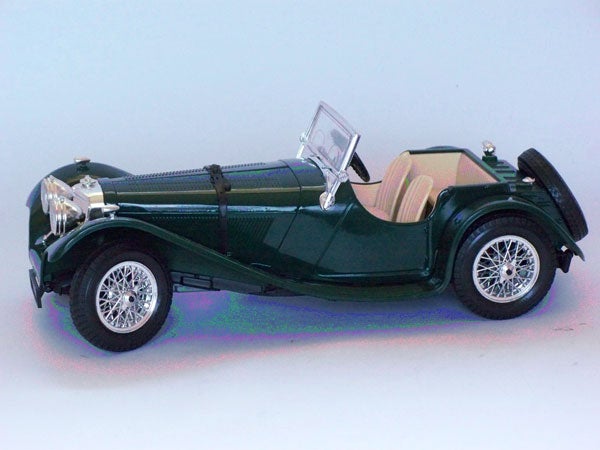 Is this colour distortion at ISO 800 related to the technical problem that caused the camera to crash? 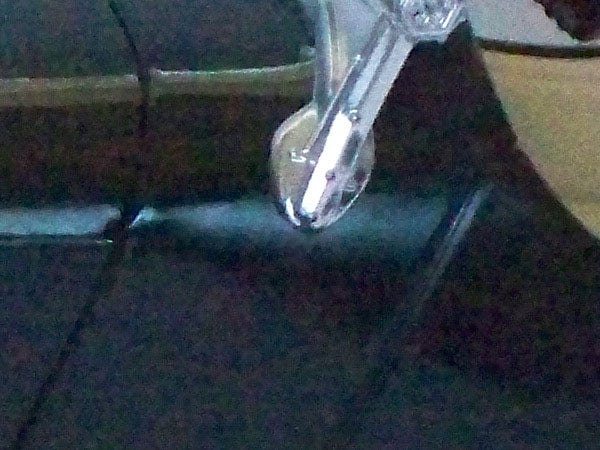 At ISO 1600 the image quality is very low, with poor colour and little fine detail. 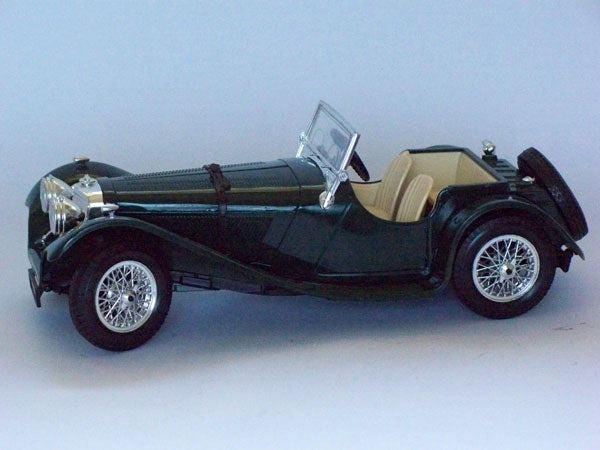 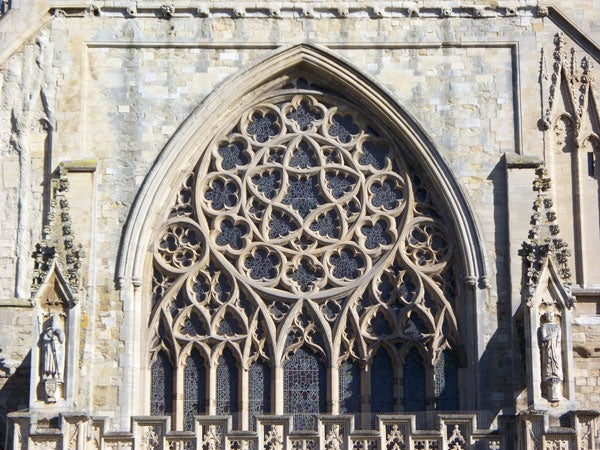 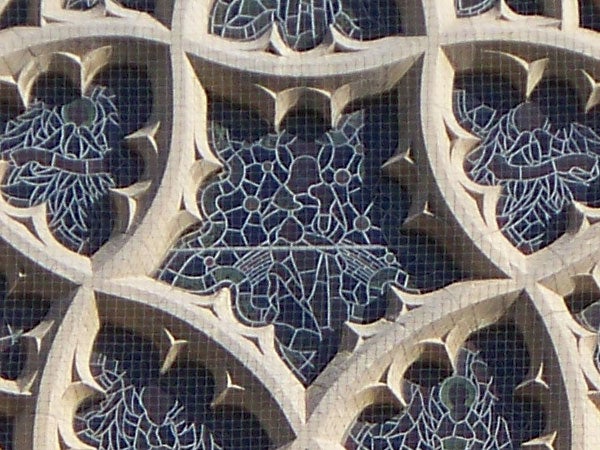 Compare this shot with the Casio EX-Z1200. The Kodak’s Schneider-Kreuznach lens is very good. 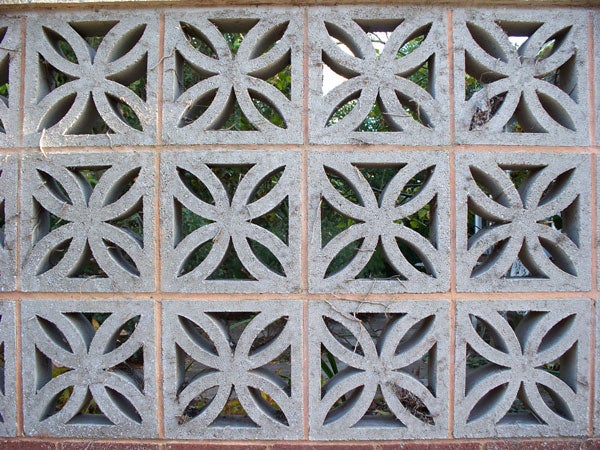 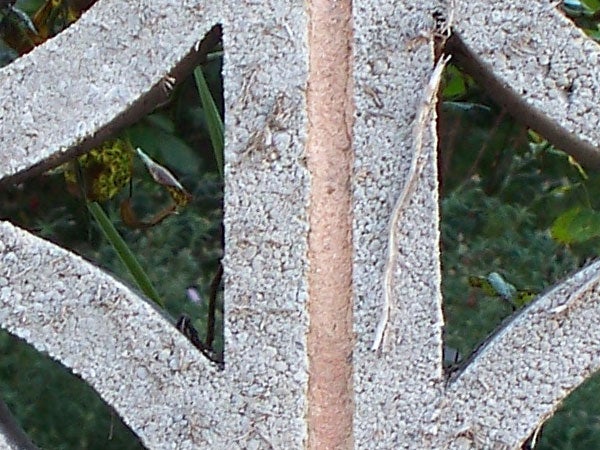 Sharpness is excellent at the centre of the frame. 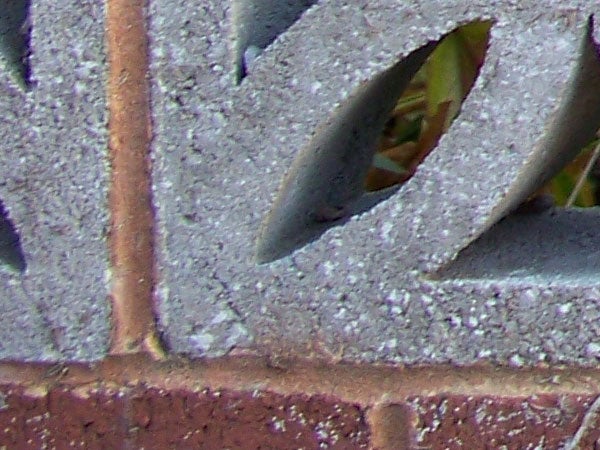 The edge of the frame is also sharp, with little chromatic distortion. 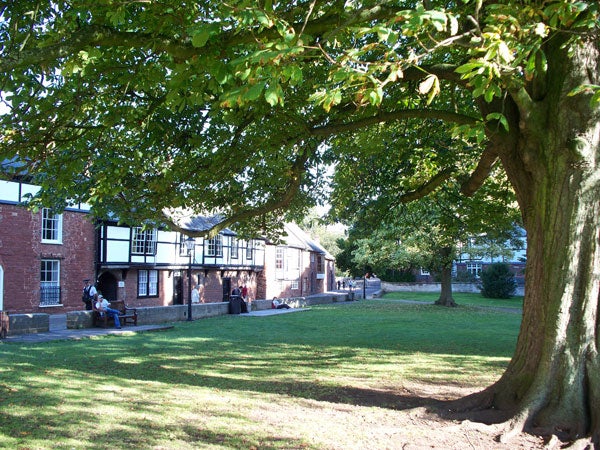 The wide-angle end of the zoom range is equivalent to 35mm, which is a bit wider than average, but the limited dynamic range has resulted in some burned-out highlights. 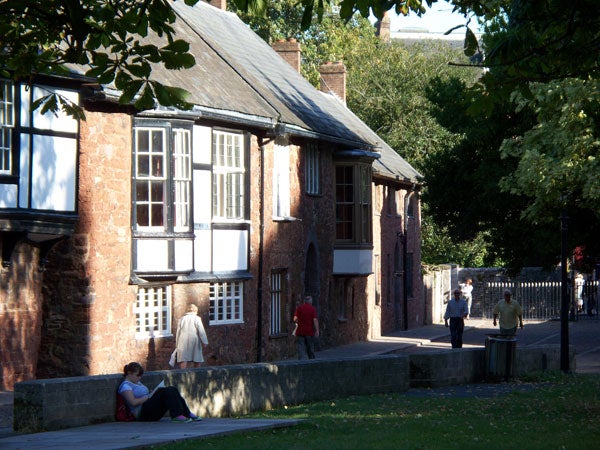 Taken from the same spot as the shot above, this shows the 175mm-equivalent telephoto end, and even more burned-out highlights and murky shadows. 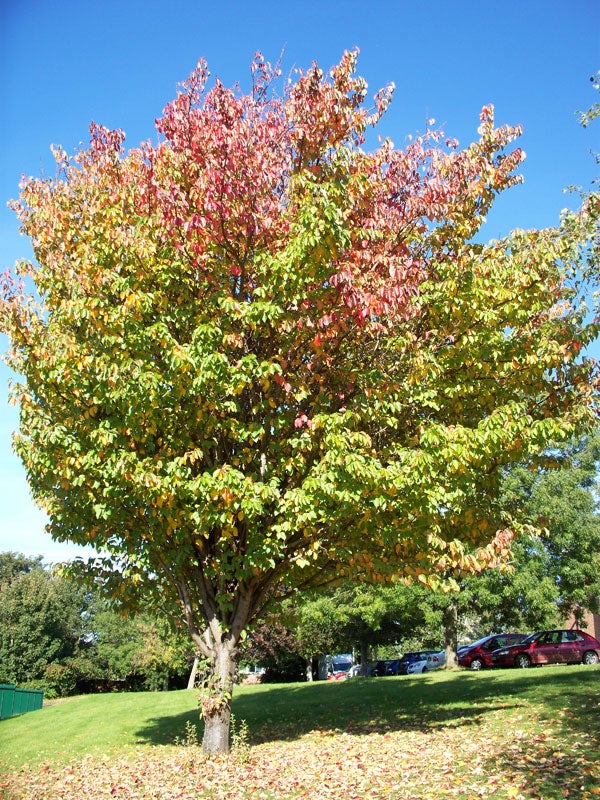 As usual, the Kodak colour processing is superb. 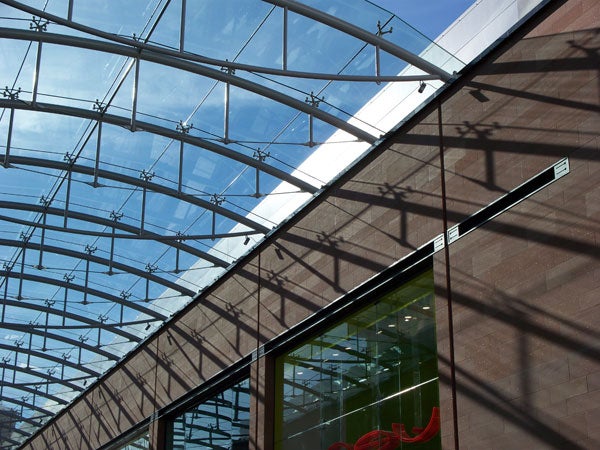 This high-contrast shot looks good, but the shadows lack detail.