Announced as recently as January this year, the EasyShare V803 occupies the second-from-top position in Kodak’s popular V-series of pocket-sized compact digital cameras, just behind the 10-megapixel V1003. The V803 features an 8-megapixel CCD, a compact 3x optical zoom, a 2.5in LCD monitor, and comes in a range of no less than eight different colours, including red, blue, yellow, purple, white, silver, pink and the sexy matt black version I’m testing today. 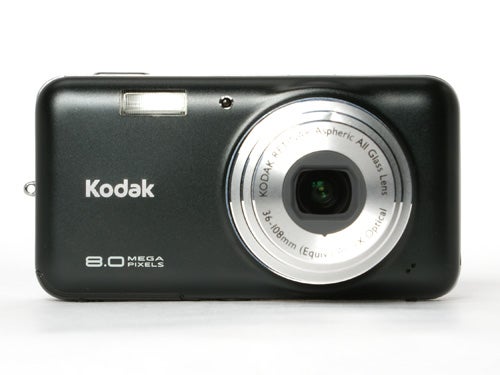 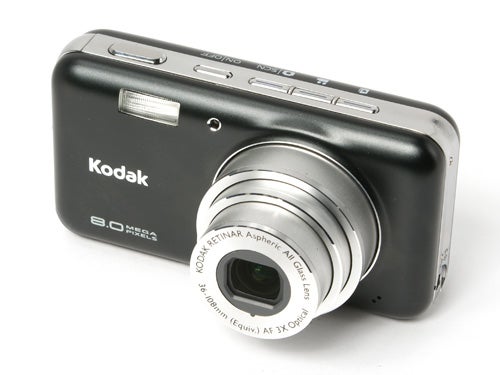 Initial impressions are extremely favourable. The camera is sleek and stylish, with an aluminium body that is smoothly rounded with no protruding controls, and build quality is excellent. The lens retracts back into the body, and the whole package is designed to slip into a pocket for a night out. It has a long thin shape, measuring 103 × 54.5 × 25 mm and weighing 141.5 g, so while it’s not quite in the ultra-compact category, it is one of the smaller and lighter cameras I’ve seen recently. The LCD monitor is positioned centrally on the back panel, with the main control buttons on the top and left, leaving plenty of room on the right to hold the camera, and despite the lack of any sort of thumb or finger grip it fits securely and comfortably in the hand, and can easily be operated one-handed. The only thing I wasn’t too keen on was the zoom control, which is a bit small and fiddly and only provides five steps between the wide and telephoto ends of the zoom range.

The V803 is a simple snapshot camera, but even so it’s not entirely lacking in useful features. It doesn’t have any manual exposure controls, but it does have an exhaustive list of 23 scene programs, including left and right panorama stitching, a high-ISO anti-blur mode, a panning-shot mode with lower shutter speeds, text-copying mode, a silent flashless museum mode as well as the usual options including portrait, landscape, sport, night landscape and portrait, snow and sunset. 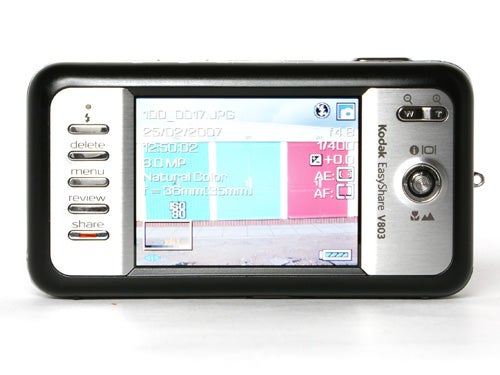 Picture adjustments on the menu include three different saturation settings, monochrome, sepia, and unusually for a point-and-shoot compact, adjustable sharpness. Other options include single or continuous AF with multi-zone or centre-zone focus point, three metering modes (multi-patterns, centre-weighted or spot), and a self timer with two second, ten second or double-shot options. Exposure compensation is conveniently located on the left and right directions of the D-pad. Not a bad selection of options for a budget-priced compact.


One slight hiccup in this so-far satisfactory result is general performance. Turning the camera on requires holding down the power button for just over a second, after which the lens pops out at near-supersonic speeds, but unfortunately the rest of the camera just can’t keep up with it. From the first press of the button it takes a leisurely 4.5 seconds to start up, most of which seems to be occupied by the software booting up. It shuts down again much more quickly, in around 2.75 seconds. The camera doesn’t have a proper continuous shooting mode, but it does have a four-shot burst mode which can shoot at one frame a second, although the flash is disabled in this mode. 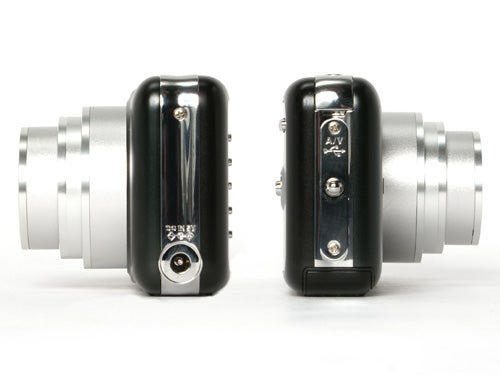 The AF system is reasonably quick, and operates extremely well in reduced lighting, such as a pub or club. It can focus in total darkness thanks to the AF illuminator, but this only has an effective range of about 1.5 metres, good enough for close portraits but not much more. This is just as well, because the flash is seriously underpowered. The stated range is 0.6–3.0m at wide-angle and 0.6–2.0m when zoomed in, but to be honest this is a bit generous. I found that in a social setting (down the pub) the effective range at wide angle was no more than two metres.

The video mode at least is good, shooting at 640×480 resolution and 30fps with decent quality sound. Movie playback offers frame-by-frame advance, simple editing, and the option to take still frames from video clips.


Battery life seems to be reasonably good. The V803 is powered by a surprisingly compact 1050mAh Li-ion rechargeable, and I was able to use the camera for several days, shooting about 150 shots, many with flash, without making much of a dent in the charge meter. 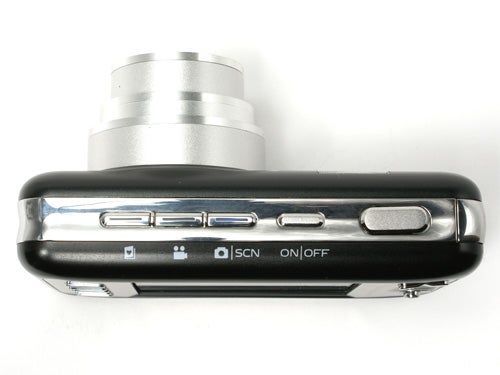 Fortunately the V803 makes up for its performance deficiencies in picture quality. As with most Kodak cameras, colour rendition is fantastic, with superbly rich natural colour. Exposure is also excellent, with very good dynamic range providing plenty of shadow detail without losing the highlights. The 8MP sensor captures plenty of fine detail without the purple highlight fringing that affects some high-resolution CCDs. Noise control is also good. Although there is some image noise as low as 100 ISO it remains well controlled up to the maximum of 1600, and shots at that speed are usable.


Surprisingly the picture files average only around 2.1MB, which is very small for an 8MP camera, but despite this there was little evidence of compression artefacts, and it does mean that a 1GB SD card is enough for a massive 439 shots. 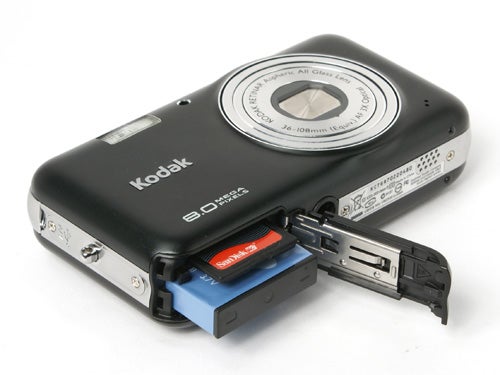 The Kodak Retinar lens performs brilliantly, providing perfect corner-to-corner sharpness with no trace of chromatic aberration. There is some barrel distortion at wide angle, but no more than most zoom compacts, and anyway it vanishes completely with just a touch of zoom. The zoom range of 36-108mm equivalent is wider than most other 3x zoom compacts, making the V803 a good choice for holiday snapshots with wide landscapes and large groups of people.

If you can forgive its sluggish start-up time and underpowered flash, the Kodak Easyshare V803 is a well made and stylish camera with a good range of user options, long battery life and easy handling, and which can provide excellent picture quality at a very reasonable price.


Full-sized versions of some of the following images can be downloaded in a new window by clicking on the sample shots as indicated. However be aware that the average file size is over 2MB, so those on very slow connections will experience some delay.” 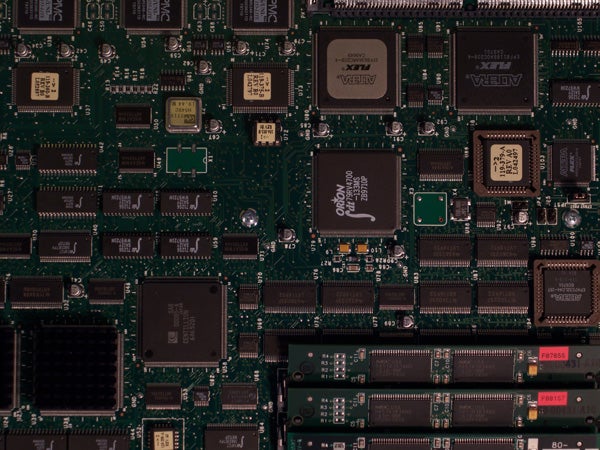 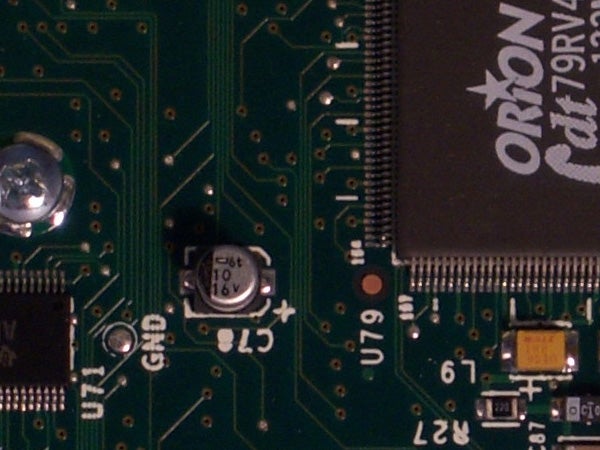 At the minimum 80 ISO the image is nice and clear, but a little dark since it was below the minimum shutter speed. 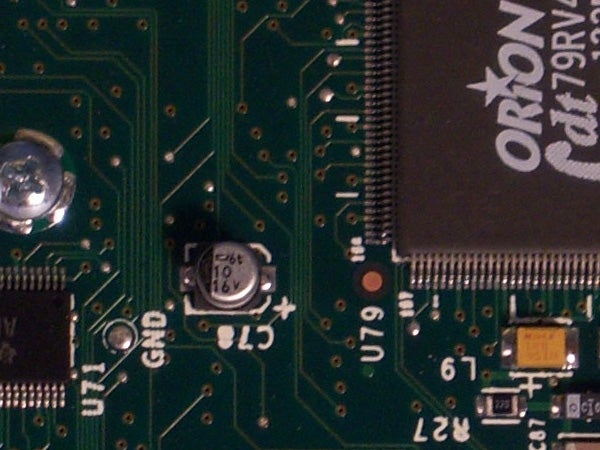 Just one third of a stop higher at 100 ISO and there is some colour speckling in the darker areas, but the level of detail is still good. 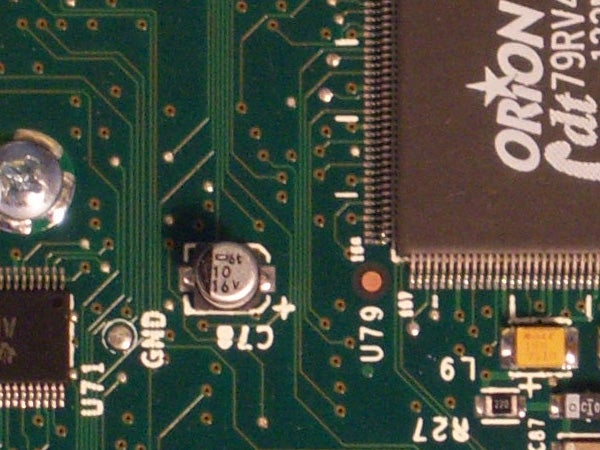 At 200 ISO the exposure is noticeably better, although there is still colour noise in the darker areas. 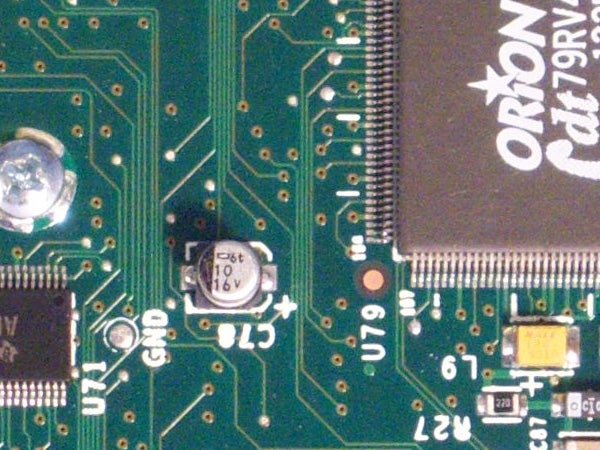 At 400 ISO the exposure is brighter, and the level of image noise is only slightly increased. 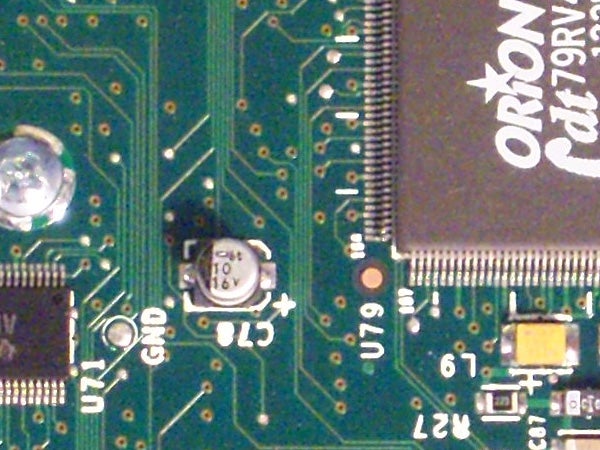 At 800 ISO there is a sudden drop in the level of detail, as the noise reduction system blurs and resharpens the image. 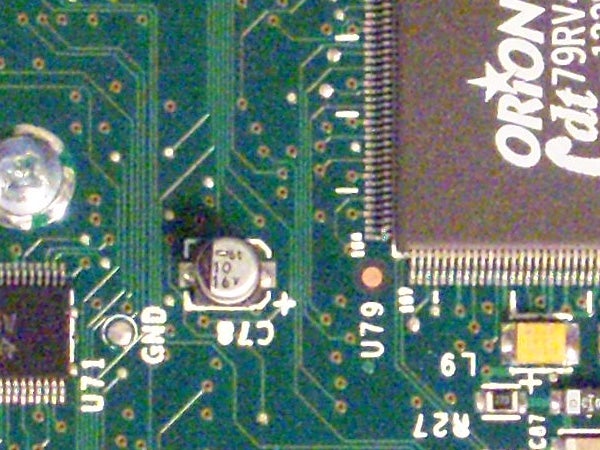 At 1600 ISO there is significant image noise, but the overall quality and level of fine detail is still not too bad and would print fairly well.


Full-sized versions of some of the following images can be downloaded by clicking on the sample shots as indicated. However be aware that the average file size is over 2MB, so those on very slow connections will experience some delay.” 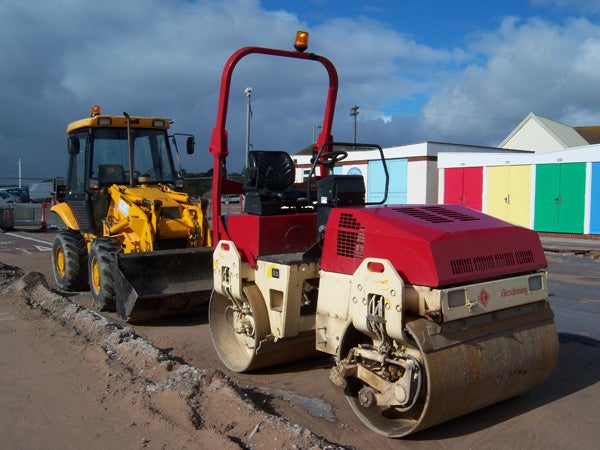 The 8MP sensor is a good size to take advantage of the high quality Retinar lens, which provides plenty of sharp detail. 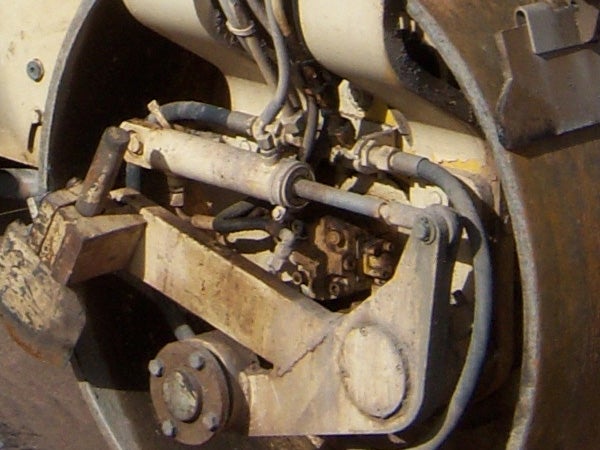 This is a 100percent resolution crop from near the bottom of the above shot. Not a trace of edge distortion or chromatic aberration. 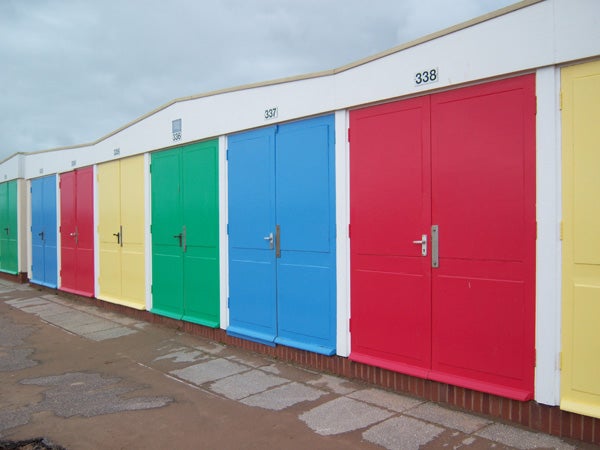 The Kodak Colour Science image processor is one of the best around for perfect colour reproduction. 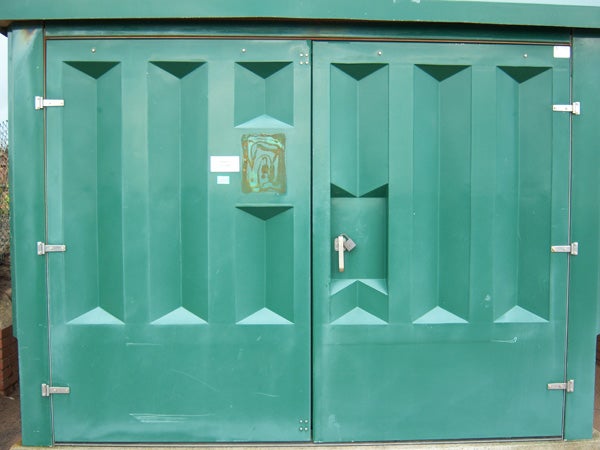 The lens does produce some barrel distortion at its widest angle setting, but it is no more severe than that produced by many other 3x zoom compacts.


Full-sized versions of some of the following images can be downloaded by clicking on the sample shots as indicated. However be aware that the average file size is over 2MB, so those on slow connections will experience some delay.” 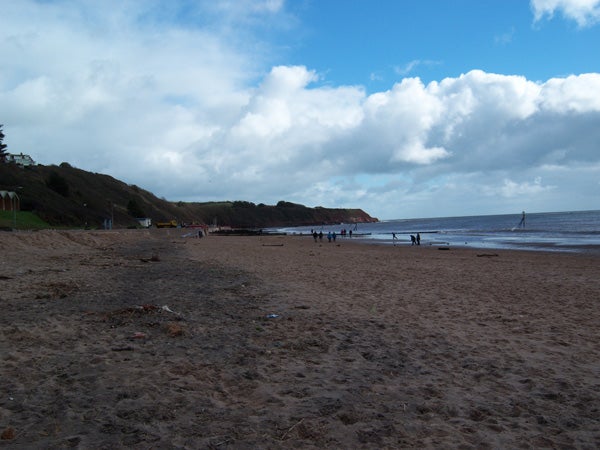 Exmouth sea front on a cold and windy day in February. I was amazed how many people there were walking on the beach, wrapped up against the worst of the effects of the fresh air. This is taken with the 36mm-equivalent wide end of the zoom. 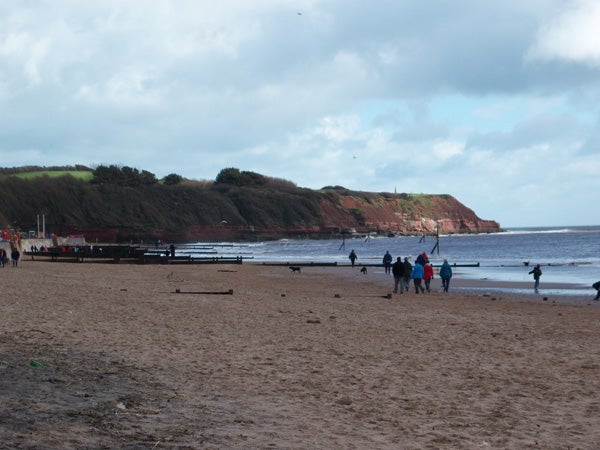 This shot was taken from same spot as above, but zoomed in to the 108mm-equivalent telephoto end of the 3x zoom. 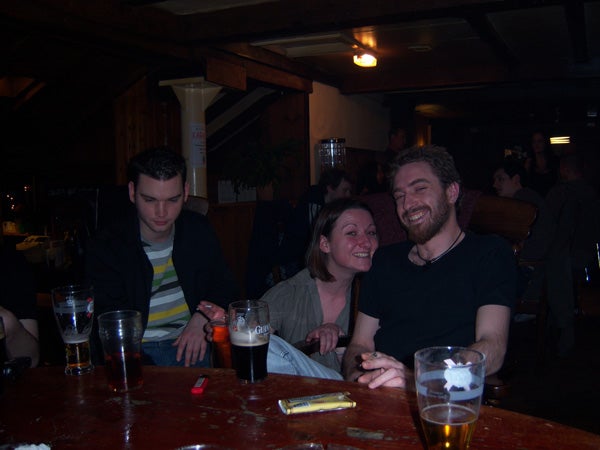 The V803’s flash is somewhat underpowered. This shot was at a range of about 2m, but it it still too dark.