Kodak has done remarkably well in making the transition from conventional silver halide photography, where it was the major player in the consumer market, to its digital equivalent. As well as a full range of consumer cameras, the company produces neat photo printers, based on continuous-tone, thermal dye transfer. The best selling of these is the EasyShare printer dock plus series 3 (EasyShare printer dock from now on), designed to mate directly with a range of Kodak cameras, including the one the company supplied for evaluation, the P880.


The EasyShare printer dock is a cashbox-sized device, made a bit less neat by a separate, black-block power supply and a paper feed tray, which projects by a good 200mm from the front of the machine. On top of the box is a plug which fits in the underside of a variety of Kodak cameras, via an adapter customised to each specific model. These adapter plates are provided with the cameras, so there was one for the P880 in its box. 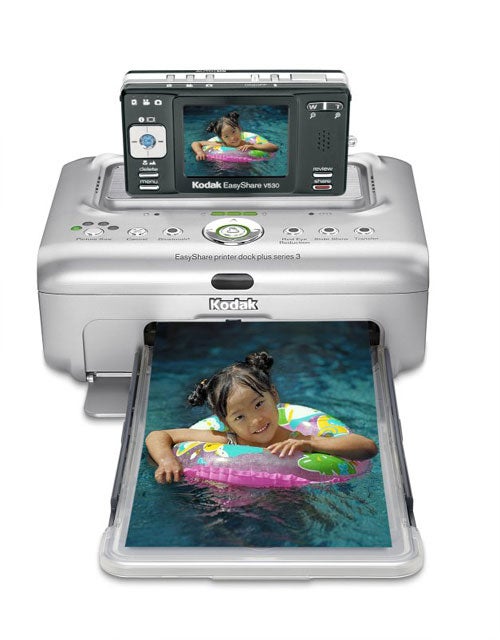 The printer is a mass of buttons and lights, with 17 assorted LEDs illuminating seven buttons and a four-way, camera-style control ring. Thankfully, they only come on together during the start-up diagnostic, but they emphasise that this printer is more feature-rich than Canon’s Selphy CP500 or Samsung’s SPP-2040, both of which use the same printing engine as the Kodak device.


For a start, it’s Bluetooth-enabled, so you can print from Bluetooth camera phones, and it has a SD card slot in the side, with an option to connect a Kodak seven-way card reader if your camera doesn’t use SD. It can do red-eye reduction on its own, without a PC present, and it can show a slide-show of your photos on a TV, using the supplied video lead.


The EasyShare printer dock uses a thin-film ribbon, which runs the full width of the print, as a carrier for the thermal dye which is transferred to the paper using a thermal head. This produces prints without the dots of inkjet or laser print and is known as continuous tone printing. It looks more like a traditional photograph.


To work with a compatible Kodak camera, all you need do is fit the adapter plate for your camera to the top of the printer dock and plug the camera in backwards, with its LCD display towards the front. This way, you can use the LCD to review and select images for printing.

Although it’s quite capable of working autonomously, with any compatible Kodak camera, the EasyShare printer dock can also be connected to a PC with a standard USB 2.0 cable, so you can print images stored or edited there.


EasyShare software is supplied with the device and this is, indeed, easy to get to know. It provides simple photo editing, as well as image management, online print ordering and email attachment.


When printing the paper is passed back and forward through the printer body, adding each of its three colours: yellow, magenta and cyan in turn. A fourth pass places a transparent gloss layer over the print, to protect it from water and scratches. Although each pass is relatively quick, there are four of them, so the overall print speed is unimpressive.


It took 68 seconds to produce a print from a PC, which is quite good, but nearly two minutes when printing straight from a camera. The P880 camera supplied by Kodak for this review is an 8megapixel device, which produced some well-balanced and highly-detailed photos, but with this size of image, the long print times could be directly related to the amount of data being processed. 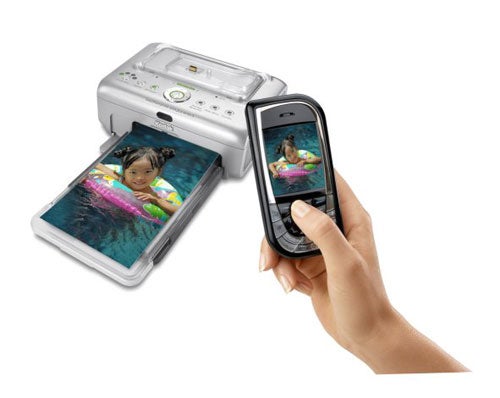 Print quality is very high, with good colour balance and little swing to any particular primary. The level of detail belies the notional resolution of 300ppi and even areas of shadow in our test prints were as well reproduced as we’ve seen them.


An extra point to Kodak for making my job that bit simpler. Working out the running costs on the EasyShare printer dock involves just one division. Kodak supplies consumables in pack suitable for 40, 80, 120 or 160 prints. Each pack comprises the relevant number of 15 x 10cm print blanks and a film cartridge sufficient for that number of images.


We took the 160 pack, since that gives the best economy, and found it at just £31 from Pixmania. That gives a cost of 19p per print, which is very competitive with the best inkjet running costs, and up to 50 per cent cheaper than other thermal dye printers.


There are plenty of good things to say about the EasyShare printer dock plus series 3: it’s inexpensive, very versatile in the cameras and phones it can work with, cheap to run and produces excellent full colour, coated prints. It may not be the fastest photo-printer on the planet and it’s limited to 15 x 10cm prints, but if that’s what you want, and especially if you have a dockable Kodak camera, it a great choice. Somebody should work on that name, though.