Since Kodak acquired the Chinon camera company in 2004, it’s consumer digital cameras have undergone a transformation, from being little more than cheap plastic toys, to producing some of the best compact digital cameras on the market, such as the outstanding EasyShare V610. However up until recently Kodak had steered clear of the high-end super-zoom market, an area largely dominated by its arch-rival Fujifilm. 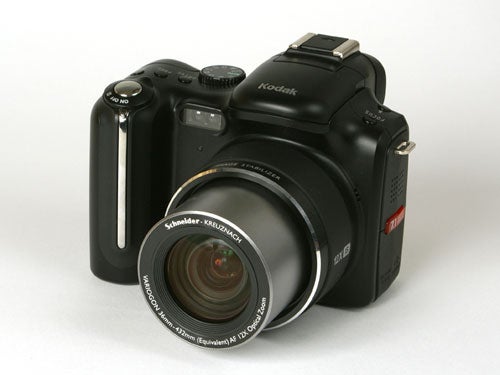 About this time last year though, Kodak launched its “P” series of cameras, getting it off to an auspicious start with the impressive and critically acclaimed 8-megapixel P880, as well as the 5-megapixel, 12x zoom P850. Both cameras have done well, so it’s no surprise that Kodak has added to the series. The 7-megapixel P712 was launched this June, with a list price of £349.99, although it is already available online for £307.98 including delivery. This is still a bit on the steep side for a consumer camera, but as we’ll see the P712 is capable of more than just a point-and-shoot snapshots.


In terms of purpose and style, it’s hard to avoid comparisons with the popular Fujifilm FinePix S5600. The two cameras certainly look very similar, and are roughly the same size. Like the S5600, the P712 is designed to resemble a miniature SLR camera, with a large handgrip, a pop-up flash and large rubberised eyepiece viewfinder. However although there are cosmetic similarities, when you look at the details the two cameras are very different. 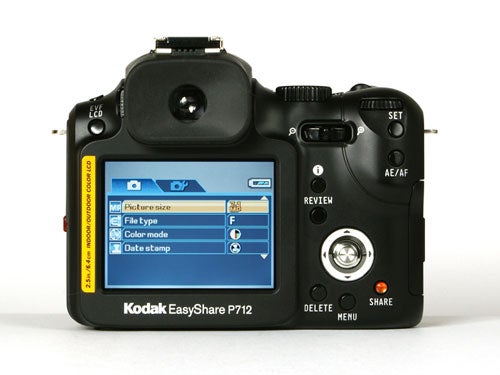 For a start, the Kodak has a 7.4-megapixel CCD, which is getting on towards SLR territory. Of course the sensor is only a tiny 1/2.5in type, so it’s not going to have anything like the image quality of an SLR sensor, but the resolution is there.


It also has a massive 12x zoom (36 – 432mm equivalent) lens incorporating a proprietary optical image stabilisation system. The lens is designed by Schneider Kreuznach, a German optics company best known for inventing the Variogon, the first effective zoom lens for cameras, in 1959. While it doesn’t have quite the reputation of Carl Zeiss, it is nonetheless a worthy name, and is found on both Kodak and Samsung optics.

For a high-end camera, the P712 is physically quite small, measuring 108 x 84.2 x 72mm and tipping the scales at 440g, slightly smaller and lighter than the S5600. However the P712 is quite complex, and its exterior is festooned with buttons and other controls. There are 13 small and virtually identical buttons scattered across its surface, as well as a mode dial, menu joystick, zoom control, data dial, eyepiece adjustment control and an on/off switch. That’s a lot of controls. By comparison, my digital SLR has only seven buttons, two dials and two switches. I’m all for making cameras intuitive to use, and restricting the amount of menu-delving that needs to be done, but in my opinion the P712 takes it too far in the other direction. There are so many controls that you spend too long searching for the right one. 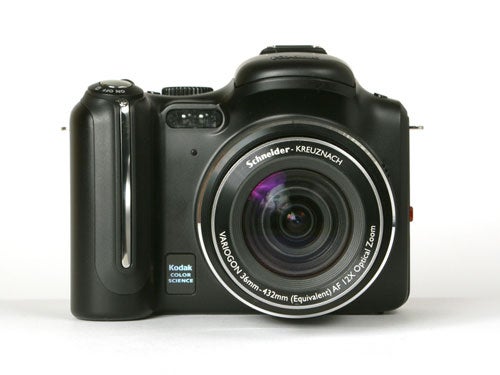 There seems to be no logic to the placement of controls either; flash mode is on one side of the camera, while metering mode is on the other. The drive mode button is crammed in next to the mode dial, while the AE/AF lock button is very awkwardly positioned on the thumb rest. The delete button is placed right next to the menu button, and is quite easy to press by accident.


The annoying thing is that the camera actually has the rudiments of the perfect alternative to this clutter. In Program or Manual modes, it has a small and easy-to-use on-screen menu for setting exposure values, flash and exposure compensation and ISO setting. Why not add a few of the other commonly used options, such as drive, metering or focus mode to this menu? Casio uses a system like this on its new Z1000 compact, and it is very quick and simple to use. 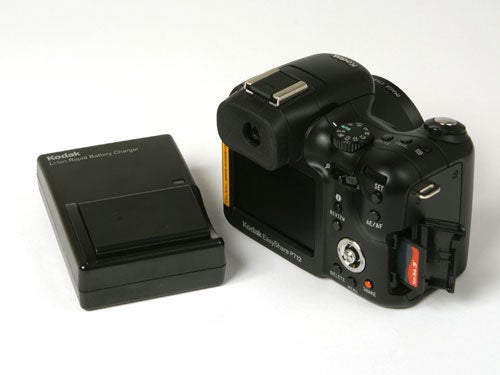 Apart from the unnecessary complexity, the handling is generally good, although I personally found the zoom control to be slow and awkward to use, and the fact that the viewfinder blanks for a couple of seconds after taking a shot is also irritating, although not that unusual.


In terms of overall performance it also does quite well. It starts up in about 3.5 seconds, which isn’t bad considering the size of the lens it has to roll out. Shot to shot times aren’t bad either, although it doesn’t have a conventional continuous mode. Instead it has “last burst” and “first burst” modes, which save a series of pictures either when the shutter is pressed or when it is released – the actual number of shots depends on the file type selected. In first burst mode it shoots 10 frames in about eight seconds.

Kodak’s unusual hybrid AF system is also good, although a little idiosyncratic. I took the camera to an air display, and found that it had little problem locking on to distant fast-moving aircraft in flight. Similarly, low-light focusing on a night out at the pub proved to be no problem. However when I tried to do the ISO test shots, I found that it wouldn’t focus on objects on a table just a few feet away when slightly zoomed in. At wide angle it has a minimum focusing distance of 50cm, but this grows to 1.9m as soon as you zoom in a little. Even in macro mode, zooming in gives a minimum distance of 90cm. How can that even be called a macro mode? 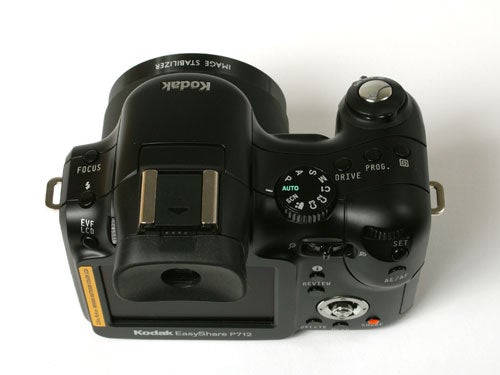 Fortunately all the small problems can be forgiven for one very good reason: picture quality. Considering the small physical size of its high-powered sensor, the P712 consistently produces excellent results, even under quite demanding conditions, and thanks to a RAW file mode you can really make the most of them. The Schneider Kreuznach lens lives up to its reputation, with excellent edge-to-edge sharpness, no corner blurring and no chromatic aberration, and only a minimum of spherical distortion at wide angle.


The Kodak Colour Science engine takes these results and ensures that exposure and colour reproduction are close to perfect. The P712 produces among the best images I’ve seen from a camera of this power and specification, comfortably beating most of its main rivals. Especially noteworthy was the low image noise at the maximum 400 ISO.

My only regret with the P712 is that it doesn’t have a larger 1/1.8in CCD. Comparing the results with the 7-megapixel Olympus C-7070, which does have the larger sensor, reveals a slight lack of fine detail, sharpness and dynamic range. However that camera is bigger, heavier and more expensive, and doesn’t have the same zoom range. For the price, the P712 represents a good compromise between affordability and creative capability.


With 7-megapixel resolution, a full range of manual shooting modes, a high quality image stabilised 12x optical zoom lens, good overall handling and the all-important RAW mode, the P712 has specification closer to a professional SLR than a compact. However the small sensor size limits its otherwise excellent picture quality, and unnecessary complexity makes it difficult to use.

Note: the Kodak P712 has ISO settings at 1/3-stop intervals from ISO 64 to 400. In the interests of saving space, only the whole-stop values are shown here. These shots were taken indoors using diffuse natural daylight. 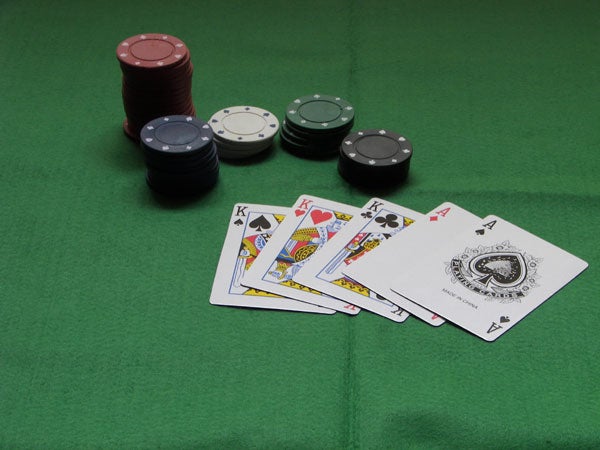 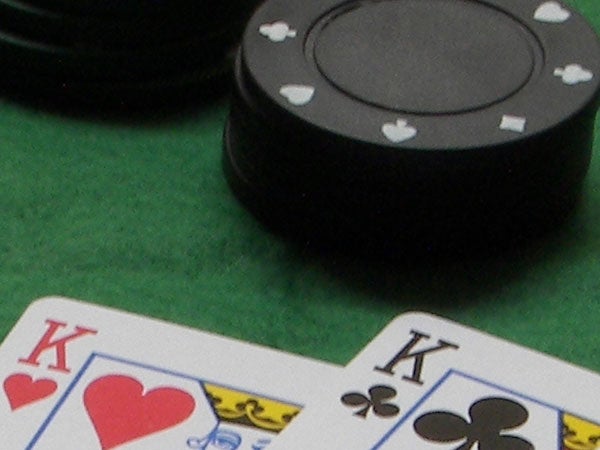 At the minimum ISO setting, the image is clear and noise-free, although this was the closest the camera would focus. 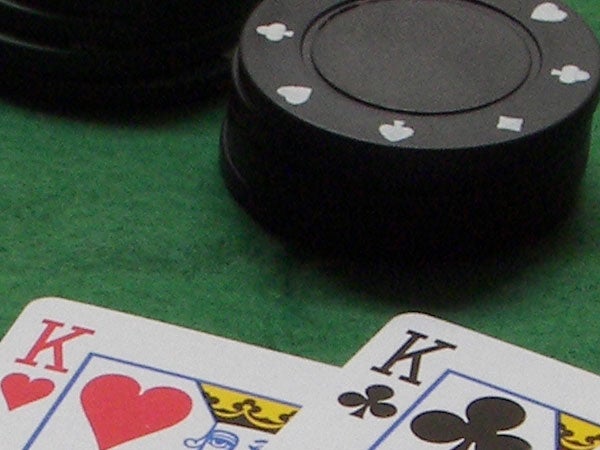 At 100 ISO the image is still clear and noise free, with excellent colour rendition. 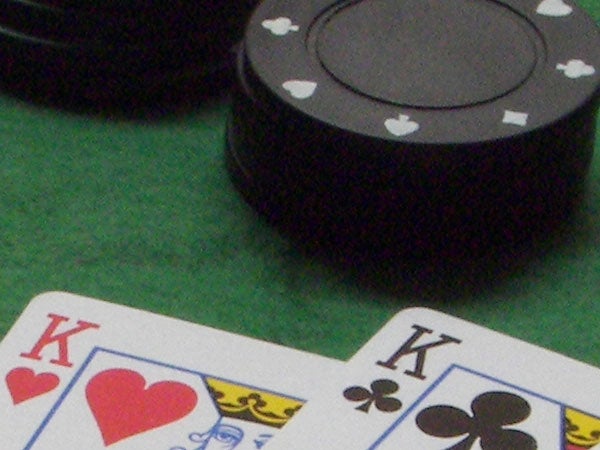 At 200 ISO there is some image noise, and colour speckling in the darker areas, but overall the image remains good and quite usable. 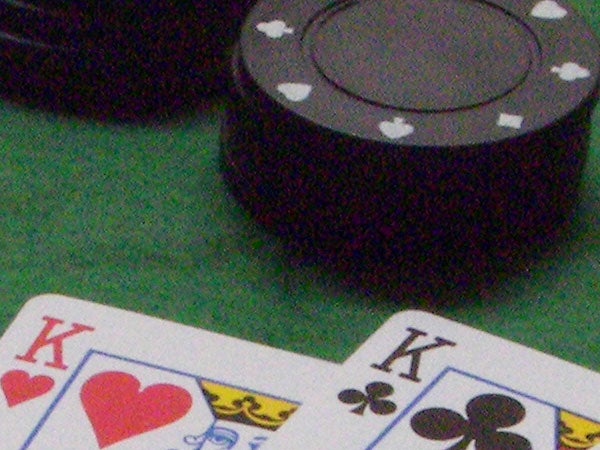 At the highest ISO setting there is some image noise across the whole image, and the colour speckling has spread to mid-tone areas as well, but on the whole it’s still pretty good. 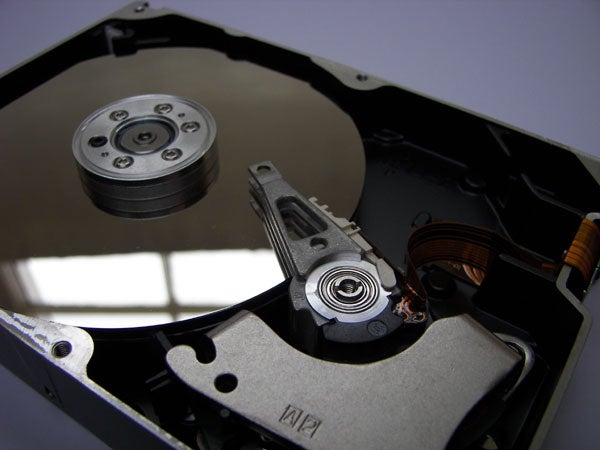 The P712 has a terrible macro range, 10cm at wide angle, but a whole 90cm when even slightly zoomed in.

For long-range shots the performance is superb. This shot of a P-51 Mustang at an air show is sharp and detailed with excellent colour, despite being shot hand-held at full zoom. 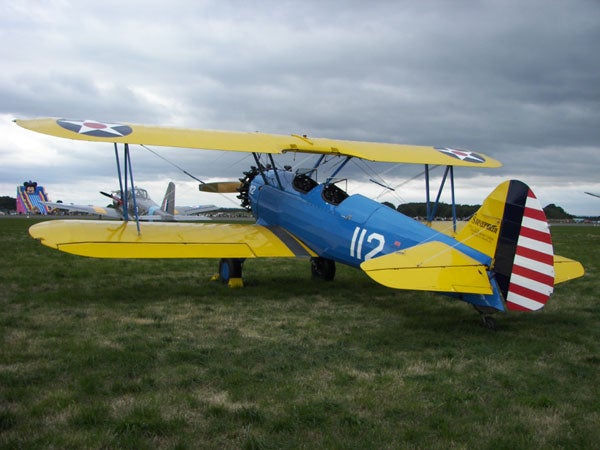 The wide-angle end of the zoom range is equivalent to 36mm, which is better than average but still not enough for real panoramic shots. 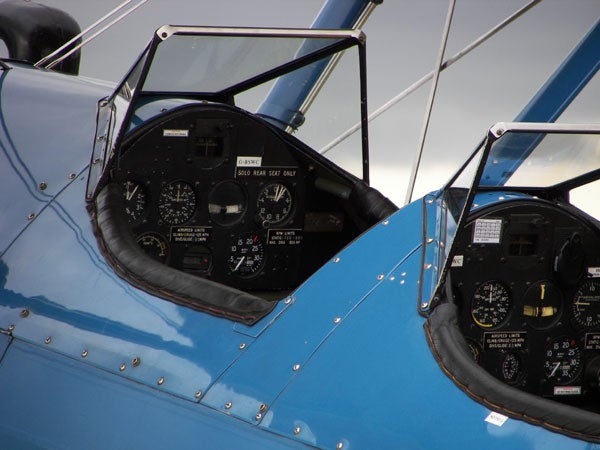 The telephoto end however is stunning, capable of picking out the smallest details in a scene. This was taken from the same position as the shot above. 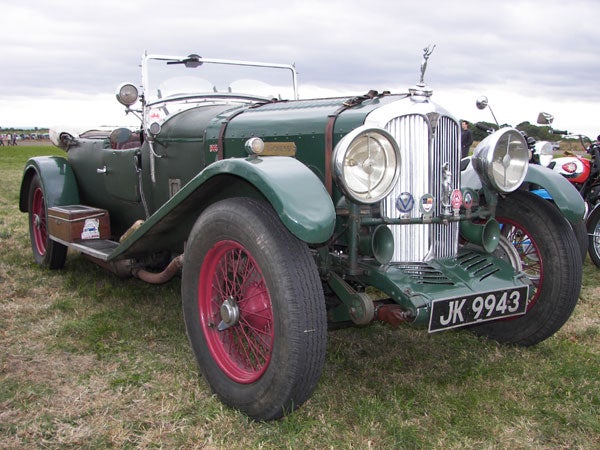 The fill-in flash mode is a little too bright, but comes in handy on an unseasonably overcast day. 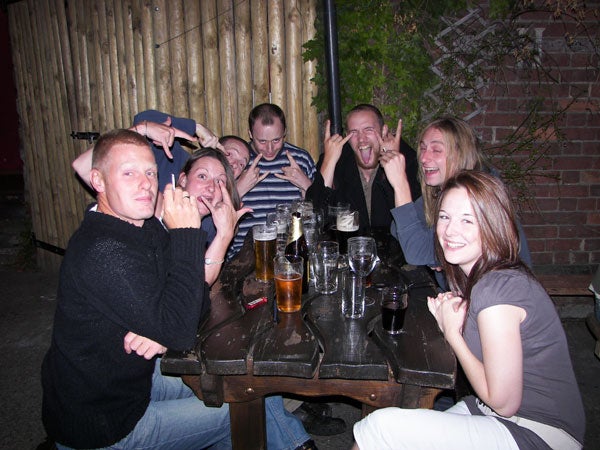 The stated maximum flash range is 5.3m at wide angle, which seems a little optimistic to me. This gaggle of lunatics were shot outdoors, and the fence in the background is about 4m away. 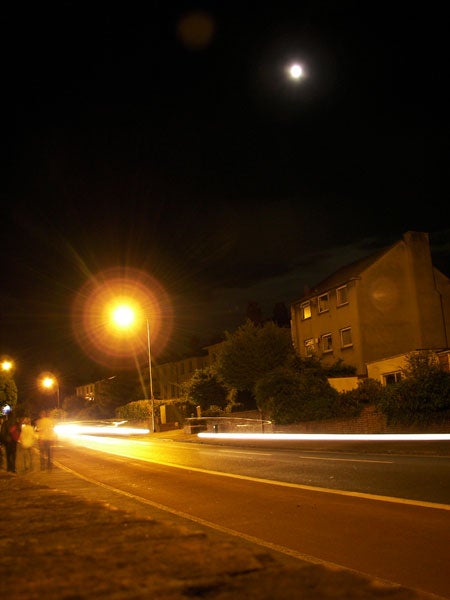 With a full range of manual options, you can get creative on your way back from the pub. This was taken by propping the camera on a wall and using the 2-second self timer.