As arguably the best-known name in photographic history, and one of the original innovators of digital imaging, it’s no surprise that Kodak offers a large range of digital cameras, with everything from big super-zoom models to stylish touch-screen ultra-compacts. Unfortunately, despite its long and illustrious history, some of Kodak’s recent models, particularly its budget-priced M-series, have been rather disappointing. However if one is to judge by specification alone then the M1093 IS, currently the top model in the M-series, could be one to buck the trend. It is a 10.1-megapixel ultra-compact camera with a 3x zoom lens, a big 3.0-inch monitor, optical image stabilisation and HD video capability, and all for under £110. 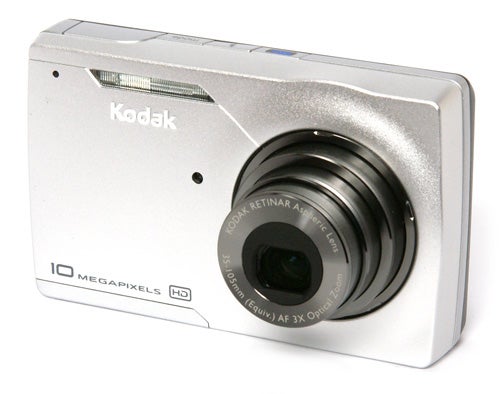 The M1093 IS certainly makes a good first impression. It’s a nice looking camera with a half-aluminium, half-plastic body, and is available in black or the anodised silver finish shown here. It has a very slim and compact shape, measuring 95.2 × 58.5 × 21.4 mm, and weighing 135g minus battery, or about 155g fully loaded. The body shape is a sharp-edged rectangular slab with slightly rounded ends, and the flush-mounting controls and retracted lens mean it can slip into a pocket with ease. The overall build quality is good, and the camera feels more solid and well made than its price might suggest. 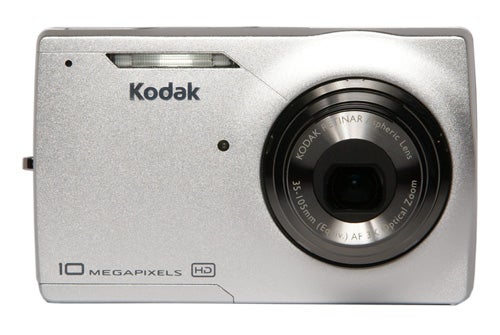 The M1093 is one of a small but growing number of cameras that can be charged via a USB connection. The supplied battery charger comes with both British and European plug adaptors, but the output socket is a standard USB connector. The supplied cable can be plugged into any powered USB socket for charging, so if you’re taking your laptop on holiday then you don’t need to pack your camera charger as well. The downside is that the battery is charged in the camera, but unless you spend £18 on a spare battery that’s not going to be a problem. Like all Kodak compacts the M1093 also comes with an adaptor plate for the EasyShare printer dock.

The control layout is less than ideal. The small flush buttons on the top plate are fiddly, and the flat shutter button is hard to find by touch and easy to press accidentally. The position of the rear panel controls doesn’t leave much thumb-room for holding the camera, and the zoom control, while quite large, is very slow and unresponsive. Instead of a D-pad there is a small joystick which is used for menu navigation, with display mode and drive mode as secondary functions. Personally I don’t mind joystick controls too much, but I know some people hate them. 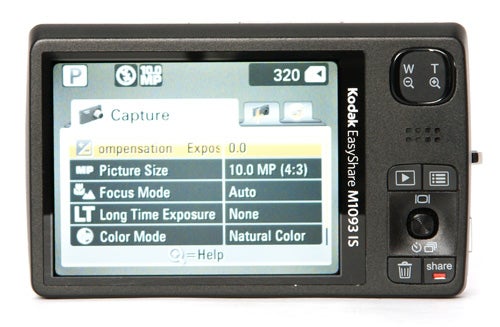 The M1093 offers a number of features which have now become almost universal, including a face detection system which works quite well even in fairly low light, although as usual it will only reliably detect faces that are looking straight into the camera. It also has optical image stabilisation, which is always a welcome addition, although to be honest it’s not that much of an advantage on a 3x zoom camera. Nonetheless it does work quite well, and provides an extra couple of stops of low-speed stability. However like a few other recent cameras with optical IS that I’ve tested, the stabilisation system will actually cause blurring if the camera is too stationary, so always turn it off when using the camera with a tripod.


The stand-out feature for the M1093 has to be its video mode. It can shoot in 1280 x 720 high-definition mode, as well as VGA and QVGA, all at 30fps with mono audio, saving files in the MPEG4 video format. Both autofocus and optical zoom can be used while shooting, and HD video clips can be up to 30 minutes long. This is an impressive performance for a budget-priced camera; there are models costing twice as much that can’t match it. The video quality is good too, although as usual the sound quality could be better. 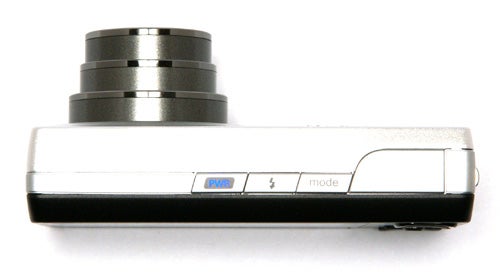 The only major problem I have with the M1093 concerns its still shooting modes. It has three; a program auto mode, a scene mode with 22 scene programs, and the Smart Capture mode, which attempts to select a scene mode automatically. The camera defaults to this mode whenever it is switched on, but unfortunately it doesn’t work terribly well. It selects landscape mode in almost every situation, unless the subject is less that six feet away in which case it selects macro mode. Unfortunately in both these modes flash is disabled, which means that in social situations, which usually means indoors in low light, you end you having to fiddle about setting it to Program mode and turning the flash on in order to take a picture. This could be solved if the camera simply remembered its current setting when turned off, but unfortunately it does not.


As well as this, the flash itself is very weak. It has a claimed maximum range of three metres, but I’d say this is a bit optimistic. It also doesn’t fill the frame very well, leaving big shadow areas especially in the lower half of the frame.

In terms of overall performance the M1093 starts well, but then really begins show its weakness. It starts up quickly in just under two seconds, but for some reason it takes four and a half seconds to shut down again. In single-shot mode it looks good at first, shooting three frames in just over five seconds, and in burst mode it can shoot three frames in less than three seconds, but then it suddenly runs into a wall. The memory buffer can only hold three shots at a time, and writes its data to the card very slowly. It takes seven seconds before a fourth shot can be taken, and then ten seconds between that and the fifth and subsequent shots. This is very slow performance, and is very frustrating if you’re trying to take a lot of photos quickly. 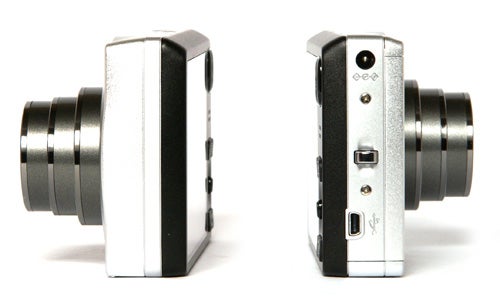 Annoyingly it does have some good points, such as the autofocus system, which is fast and accurate and works surprisingly well in low light. However the exposure meter isn’t as capable, and fails to meter correctly in low light situations, under and over exposing seemingly at random. It also has a nasty habit of setting the ISO to the maximum full-res setting of 3200 in low light situations, resulting in major problems with image noise.


Despite these significant performance problems, the M1093 is redeemed to some extent by having image quality which, while far from perfect, is actually not bad in most situations. In good light it produces rich colour and plenty of fine detail, and the lens too performs well, with minimal barrel distortion at the wide end. It does show some corner blurring and chromatic aberration, but no more than most small compacts. Dynamic range is also better than average, although the slightly erratic metering does tend to favour shadows over highlights. Noise control too is far from disgraceful, with little visible noise at the minimum ISO 64, and no real problems until 400 ISO, where the noise reduction starts to blur out fine details and the colour fidelity starts to fall apart. 1600 ISO looks like a watercolour painting, and 3200 ISO is just a horrible mush, but again that’s par for the course at this end of the market. 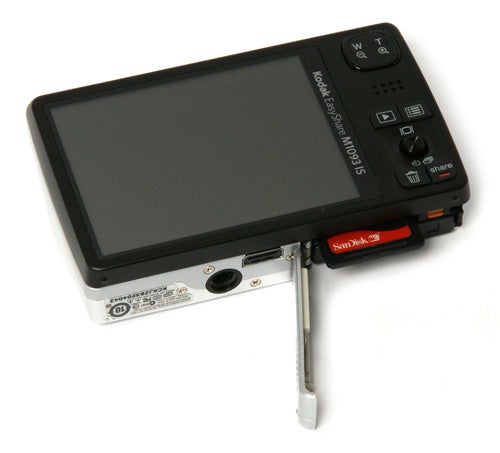 For a low-priced camera the Koadk EasyShare M1093 IS is surprisingly well made with a decent specification, including an outstanding HD video mode. It is slim and fairly stylish, and can take a pretty good picture under most circumstances, but it is let down by a distinctly non-smart Smart Capture mode, weak flash and poor overall performance. 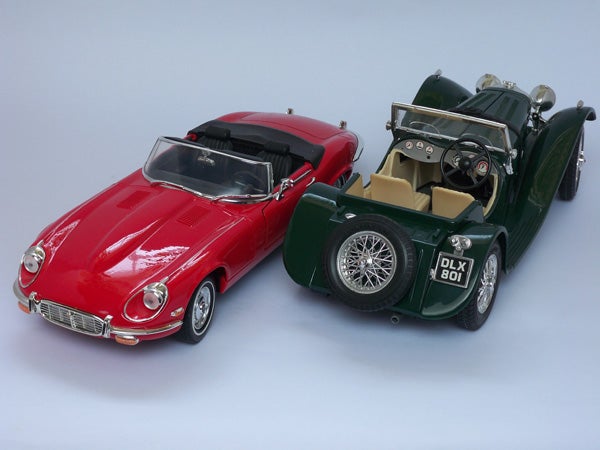 This is the full frame at 64 ISO, the minimum setting. 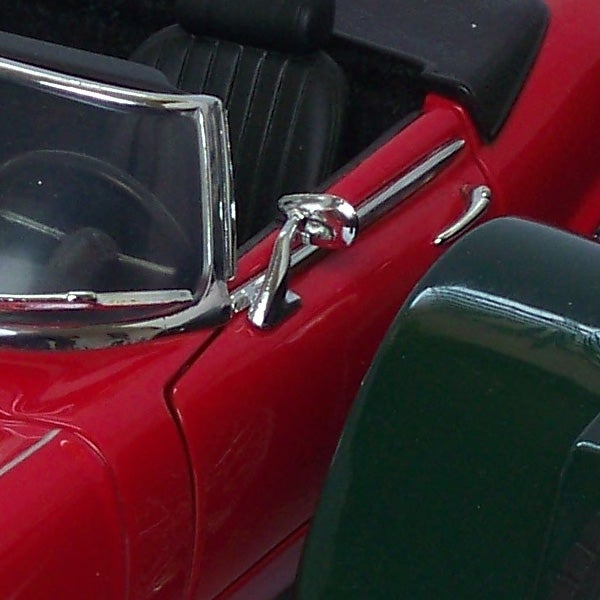 64 ISO is clear and sharp with minimal noise and good colour. 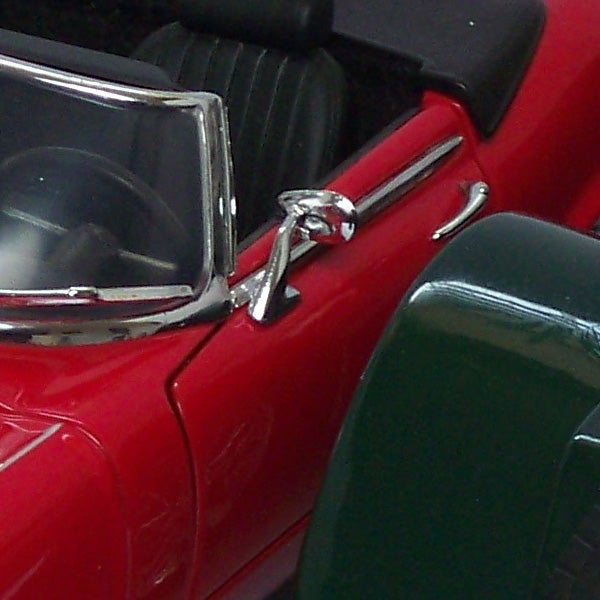 The red is slightly blotchy at 100 ISO, but overall quality is good. 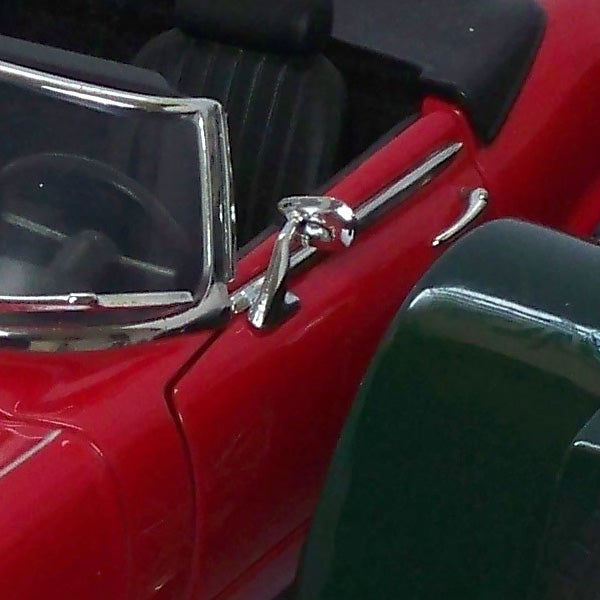 Still no major problems at 200 ISO. 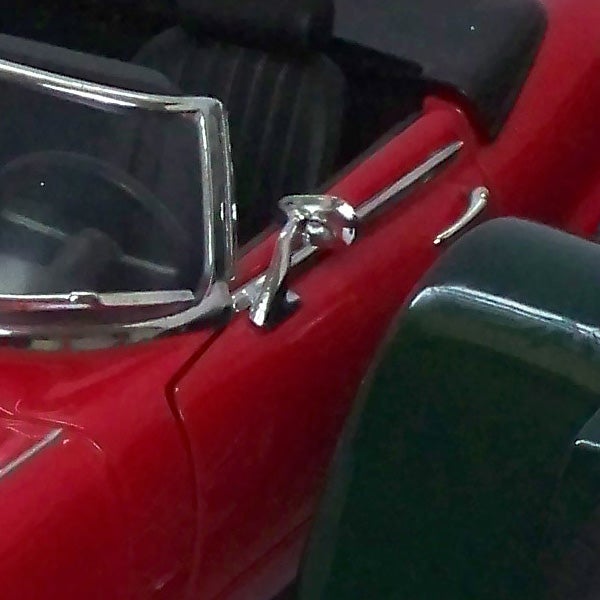 At 400 ISO the noise reduction is blurring out some fine detail. 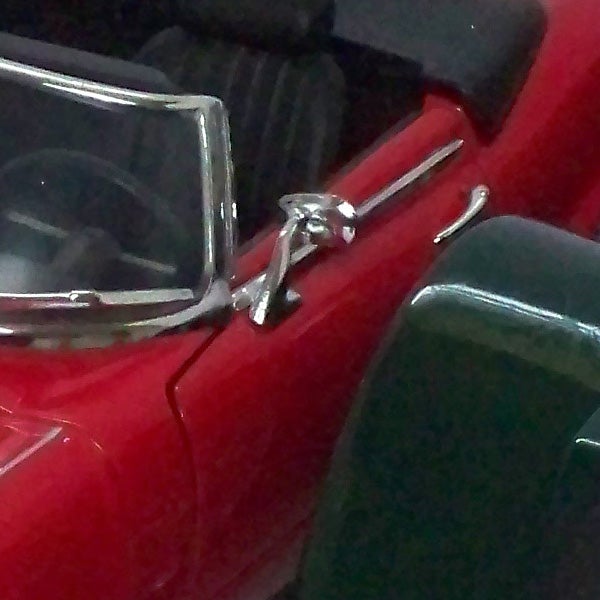 Image quality is further reduced at 800 ISO, but it would still make an acceptable small print. 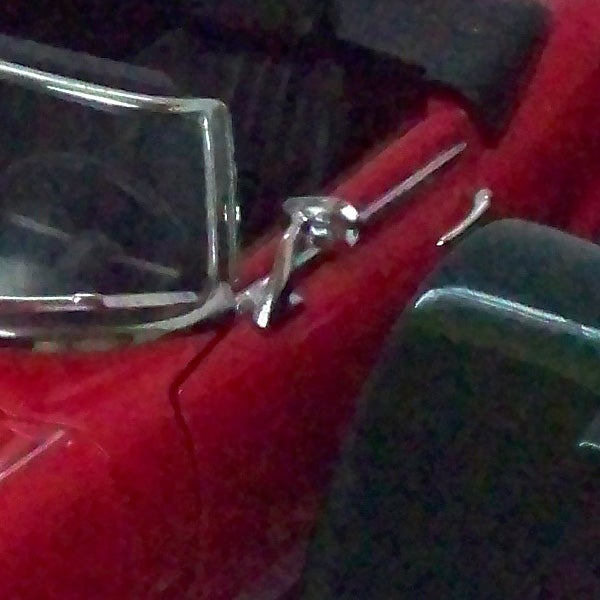 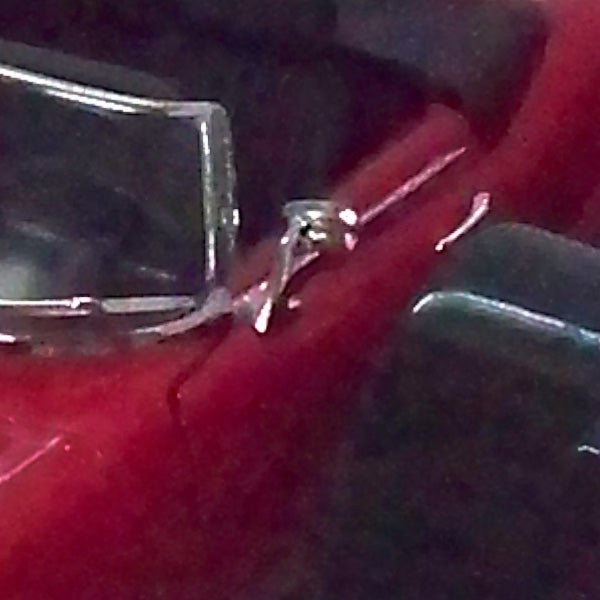 3200 ISO is the maximum setting at full resolution, but picture quality is terrible. 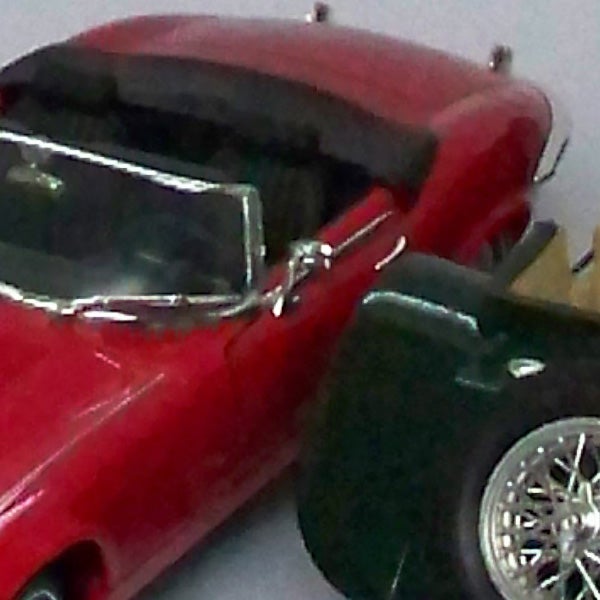 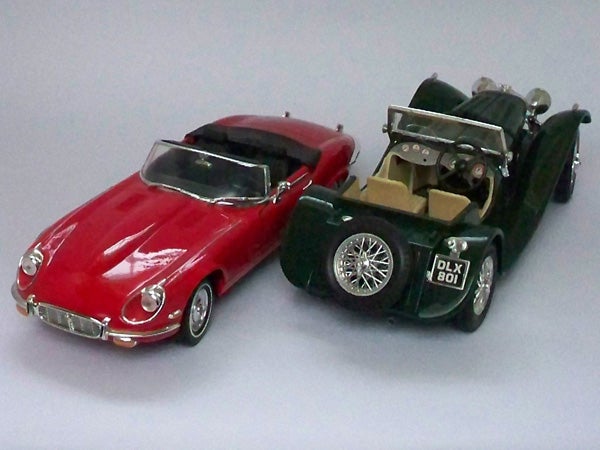 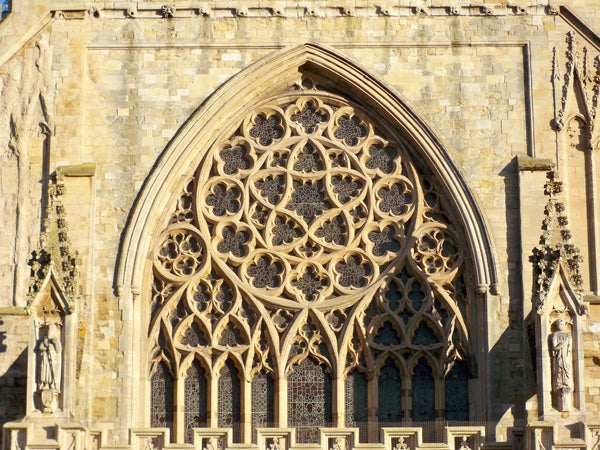 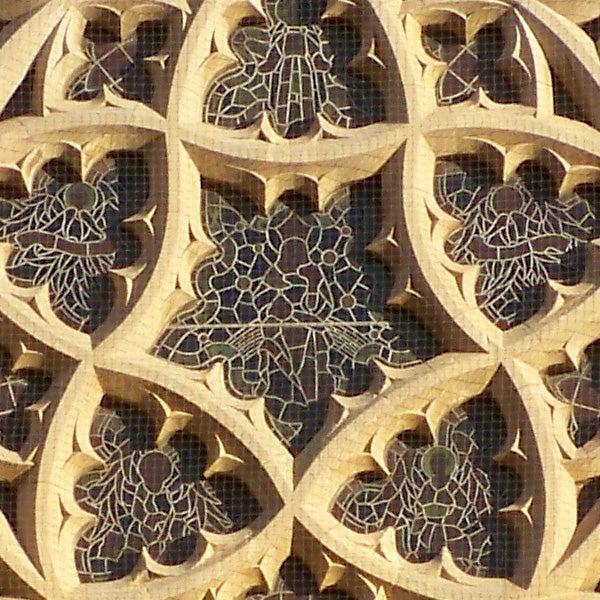 Overall detail is very good for a 10MP camera, although strong image compression has reduced the quality somewhat. 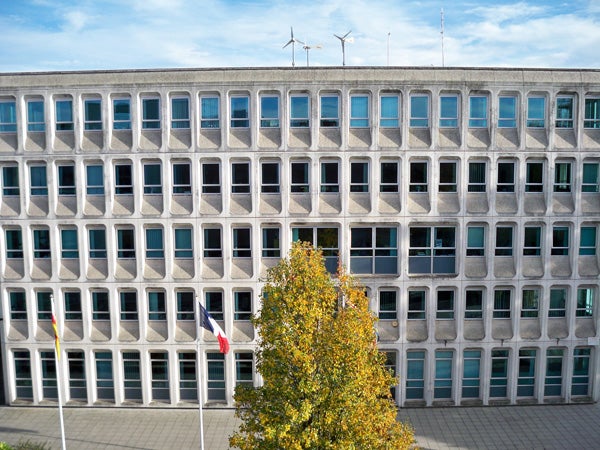 The lens performs quite well, producing only a little barrel distortion at wide angle. 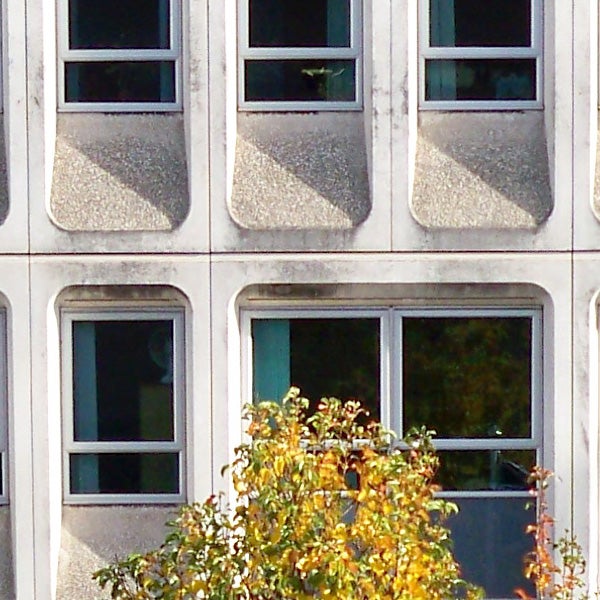 Centre sharpness is very good, although there are signs of over-sharpening. 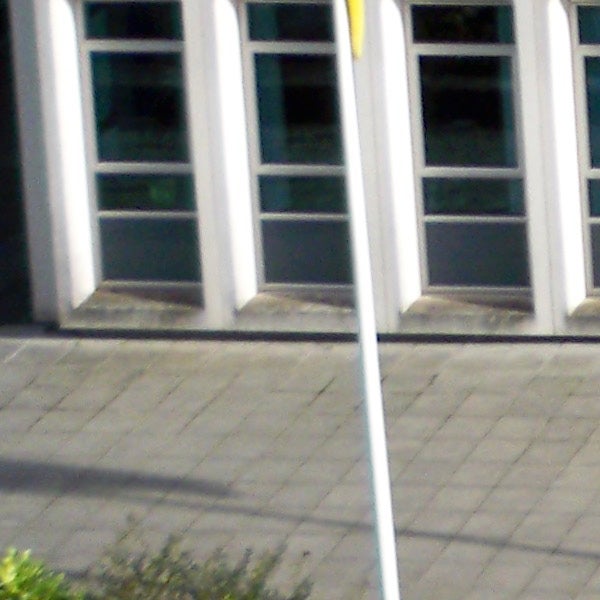 Corner sharpness could be better, and there is some chromatic aberration. 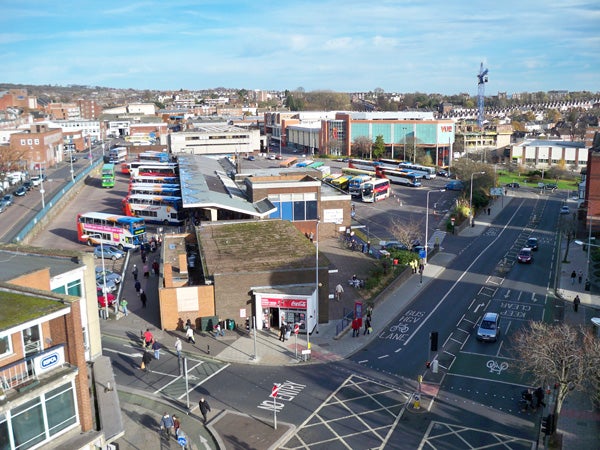 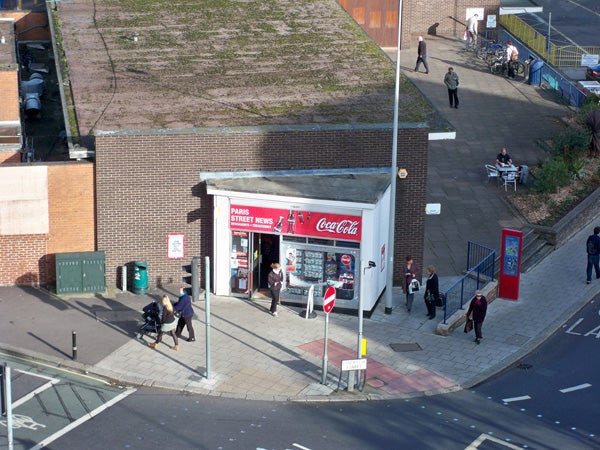 The telephoto end ofthe zoom is equivalent to 105mm. I wonder how long I can keep taking this shot before I’m arrested as a terrorist suspect? If I suddenly vanish for 28 days you’ll know why.


This isn’t as daft as it sounds; there was a failed bomb attack just round the corner from here earlier this year. 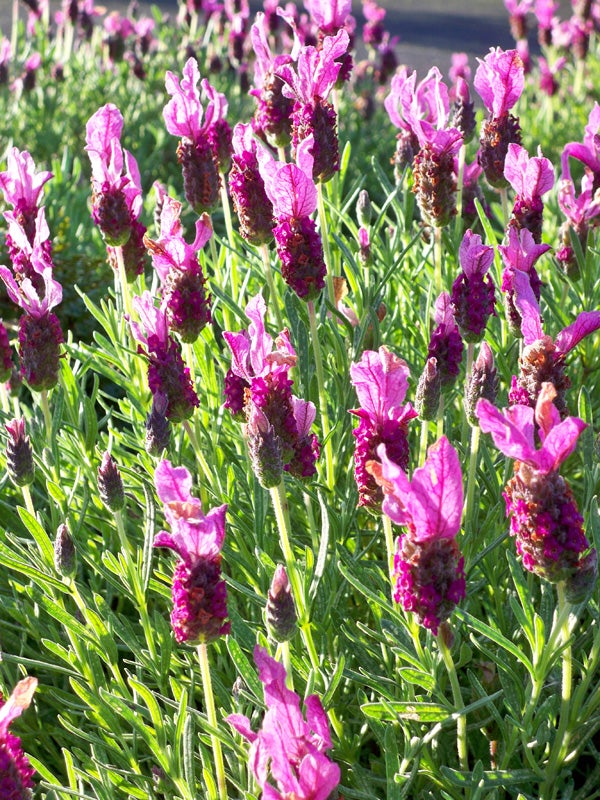 As usual with Kodak cameras, colour rendition is excellent. 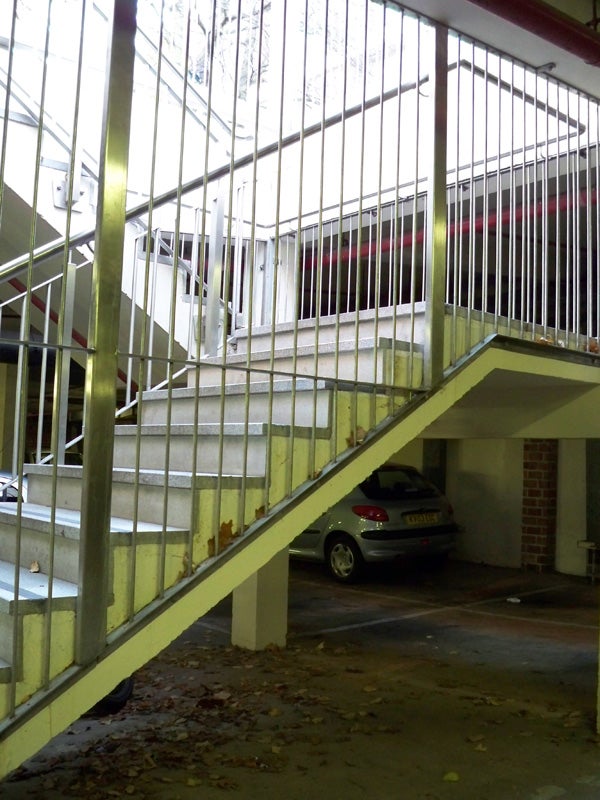 Dynamic range is better than some, but the meter tends to favour shadow detail at the expense of burned-ut highlights. 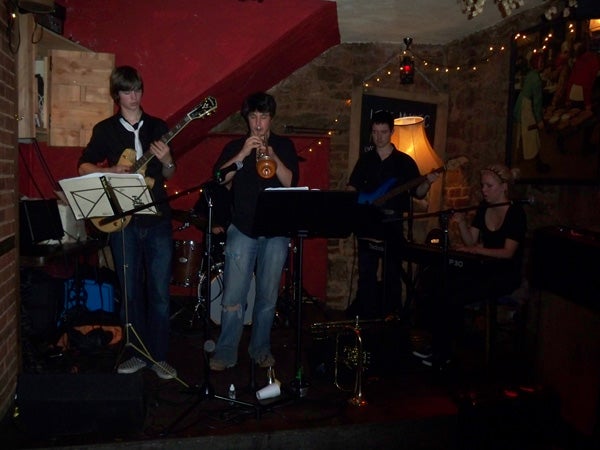 The flash is weak and doesn’t fill the frame at wide angle.