Back in May this year Kodak announced that it was going to stop making budget cameras. Personally I think this is a terrific idea. Kodak’s higher-specification models, such as the EasyShare Z712 IS, or the V803 are outstanding cameras offering performance and quality as good as anything else on the market, and excellent value for money. However historically its lower end budget cameras, by which I mean most of the C-series models, have always had a reputation for inferior build quality, slow and clumsy performance and disappointing picture quality. There have been a couple of exceptions, but for the majority of the C-series cameras, the most charitable description would probably be “cheap and cheerful”. Budget cameras don’t have to be rubbish, as Nikon has proved with its L-series, but there are plenty of nameless Chinese and Taiwanese companies turning out anonymous cheap low-grade cameras, and we don’t need one of the world’s largest photographic companies doing it as well. 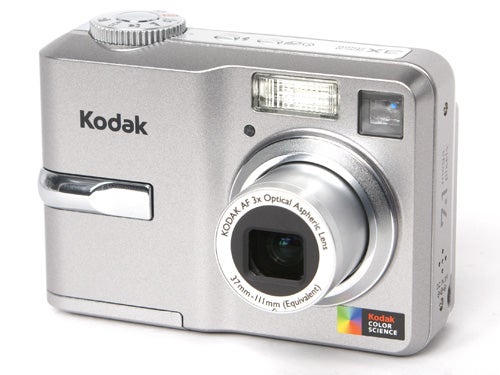 What that means is that this EasyShare C743 may well be among the last of its kind. Its specification is fairly unremarkable; it has a 7.1 megapixel CCD, a 3x zoom (37-111mm equiv.) f/2.7–4.8 lens, a 2.4-in LCD monitor and auto-only operation. It runs on two AA batteries, and has a silver-coloured plastic body. About the only sensible comparison would be with another Kodak C-series camera, or possibly something from Fujifilm’s A-series, such as the unspectacular A700, or the rather better Nikon L10. The C743 is priced at £99.99 if bought directly from Kodak via the company’s website, but can be found for under £90 from some other retailers. While this may sound like a bargain, you don’t get a lot of camera for your money. 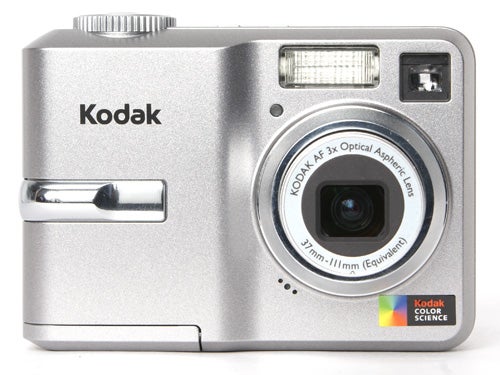 It’s not all bad though. The C743 is quite large by modern compact camera standards, but at least that means it’s fairly chunky and easy to hold. At 145g it’s also heavier than most compacts, but it feels very light for its size. Build quality at least is fair, with only a few creaks and squeaks emerging from the plastic shell when squeezed. The main mode dial is large and easy to use, and turns with a nice positive click, and most of the other very simple controls are sensibly located, although the fit and finish leaves something to be desired. Some of the buttons are a bit wobbly to say the least, and the zoom control is pretty horrible. The zoom is stepped, with only five increments between the widest and longest settings. The digital zoom cannot be switched off, but at least there is a pause before it starts.

The monitor is fairly low resolution, around 115K although this is not stated in the specifications, and has a rather slow refresh rate, but it is at least quite bright and has a good anti-reflective surface. The viewfinder is small, tunnel-like and a bit murky, with eye-watering distortion at the wide-angle end, but as such it’s no worse than the viewfinders on a lot of other digital cameras. 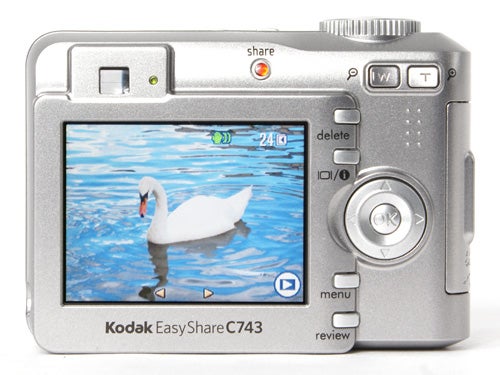 Unsurprisingly, £90 doesn’t buy you a particularly long list of features, but even by the standards of other budget cameras the C743 is rather meagrely equipped. Shooting modes are full auto, macro or landscape modes, or one of ten scene modes. Menu options are limited to exposure bracketing, exposure compensation, image size, white balance, ISO setting (80-400, or 800 in the frankly useless 0.8MP mode), focus zone (multi-zone or centre-weighted only, no spot focusing), colour mode (colour, B&W or sepia) and, er, that’s all. The movie mode is at least adequate, shooting at VGA resolution and 30fps, and the flash is also pretty good, easily exceeding its stated maximum range of 3.6m with good frame coverage. 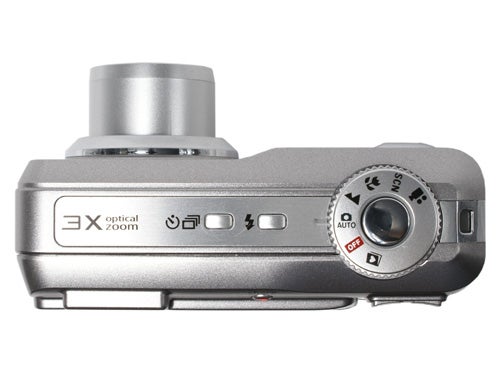 Performance is another matter altogether though. The camera takes over four seconds to start up and nearly three seconds to shut down again. In continuous mode it fires a burst of up to three shots in just under three seconds, but in single shot mode, after the first few shots fill up the buffer, the shooting rate slows to one shot every four seconds. The autofocus system is painfully slow, taking around two seconds to achieve focus in good light, but it is its low-light performance, or rather lack of it, that is the most damning problem. I found that in a well-lit room the C743 was unable to focus on anything other than the lampshade. There is, of course, no AF assist lamp. I haven’t seen such an inept focusing system in years.

The camera’s battery consumption too is a reminiscent of 2002. The C743 can eat a set of high-power alkaline batteries in just forty shots, which is appalling by today’s standards. It’s even more power-hungry than the gluttonous Fuji A700. 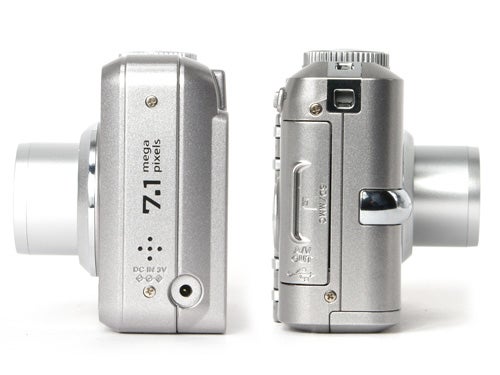 It would be possible to forgive, or at least overlook, such dismal performance if the C743 offered good picture quality, but in this area too it falls short of adequacy. Even at its highest picture quality setting, the C743 produces massively over-compressed image files averaging about 1.3MB, which is ridiculously small for a 7MP camera. As a result the images lack detail and are distorted by compression, producing blotchy colour, jagged diagonals and edge artefacts. Sure it also means you can fit 746 shots on a 1GB SD card, but I’d rather have half as many good ones. Metering is very poor; it routinely over-exposes shots so the tiny sensor’s limited dynamic range means lots of burned-out highlights. The lens produces slightly less wide-angle distortion than some more compact optical systems, but it suffers from very poor edge sharpness and some chromatic aberration. If this wasn’t bad enough, the camera also suffers from image noise even at its 80 ISO minimum setting. The maximum sensitivity at full resolution is only 400 ISO, but even this setting is practically unusable. The 0.8 megapixel 800 ISO setting is utterly useless, with compression artefacts like paving slabs. I’ve seen camera phones with better image quality. 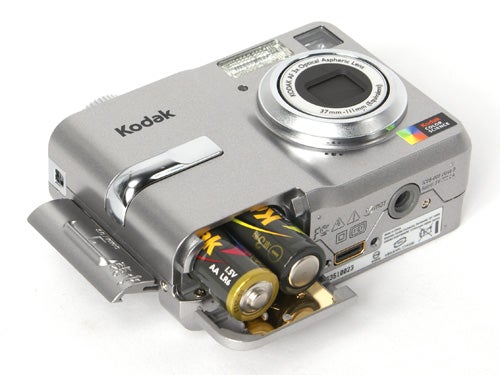 The Kodak EasyShare C743’s low price may be a temptation, but don’t be fooled; it actually represents extremely poor value for money. The meagre list of features, horrible zoom control, slow performance, appalling low-light ability, limited battery life and very poor image quality will prove to be a major disappointment for anyone unlucky enough to find themselves in possession of this camera. If the C-series is going the way of the Dodo then the C743 will not be missed. 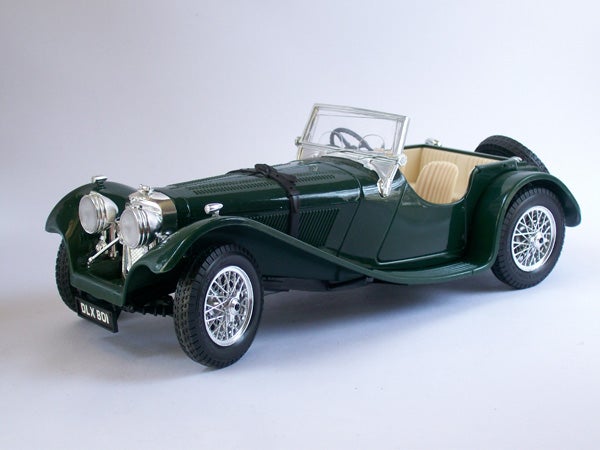 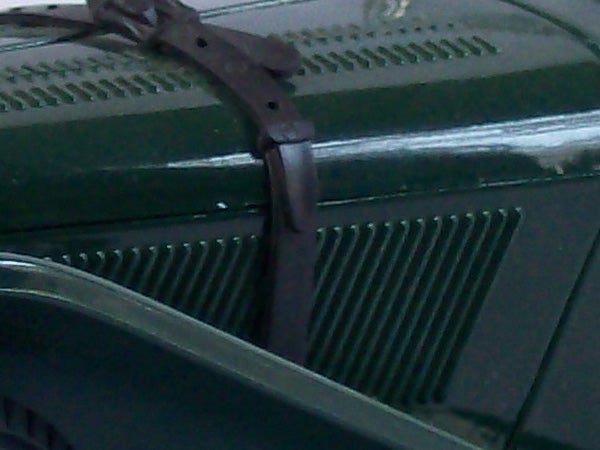 At the minimum ISO setting picture quality is as good as its going to get, but there are compression artefacts all over the place, jagged diagonals and patchy colour. 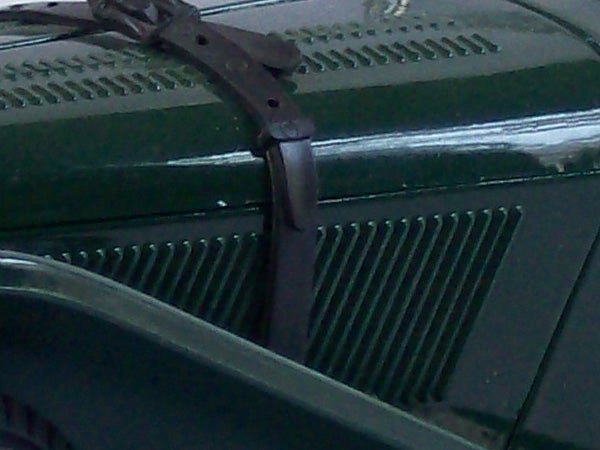 Even at just 100 ISO the picture quality is worse still. 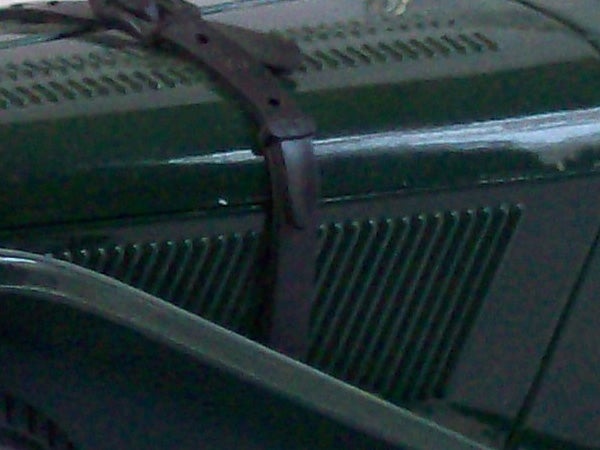 200 ISO and there is visible image noise and poor detail. 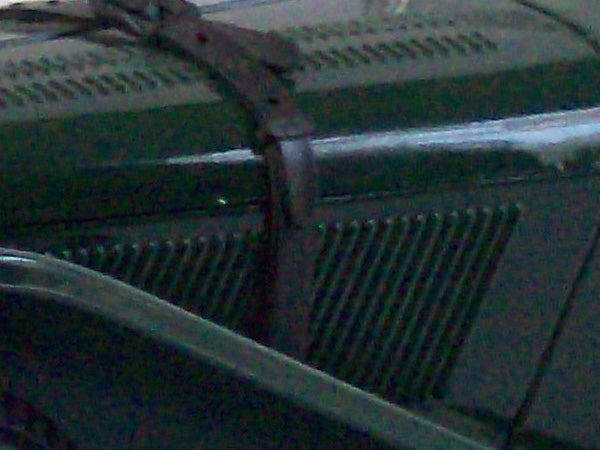 Picture quality at 400 ISO is terrible. 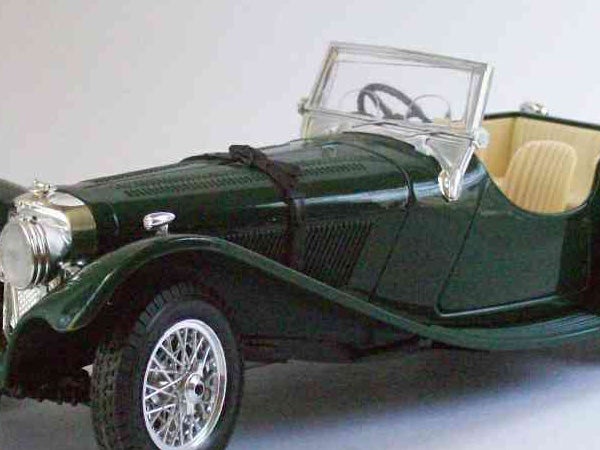 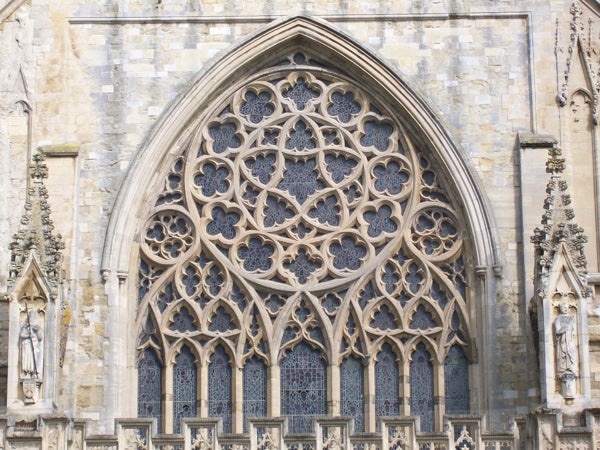 Here’s usual comparison test shot for overall detail. See below for a full res crop, or click to see the whole picture. 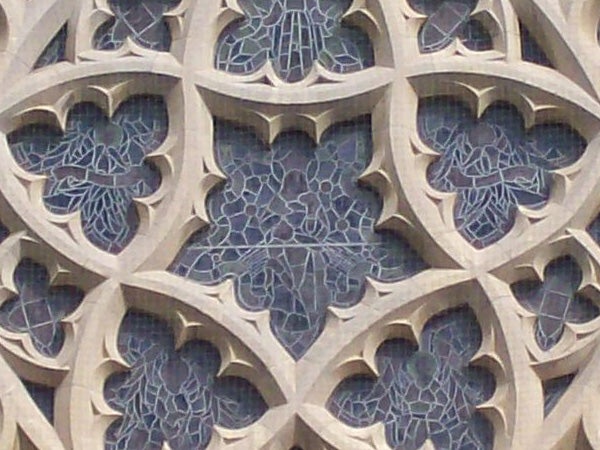 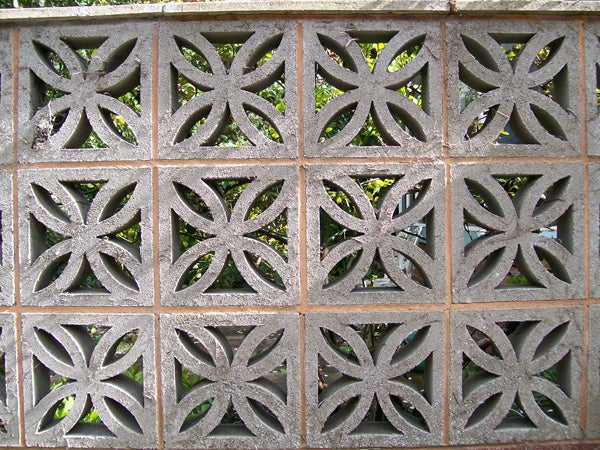 At least the lens doesn’t produce much wide-angle distortion. 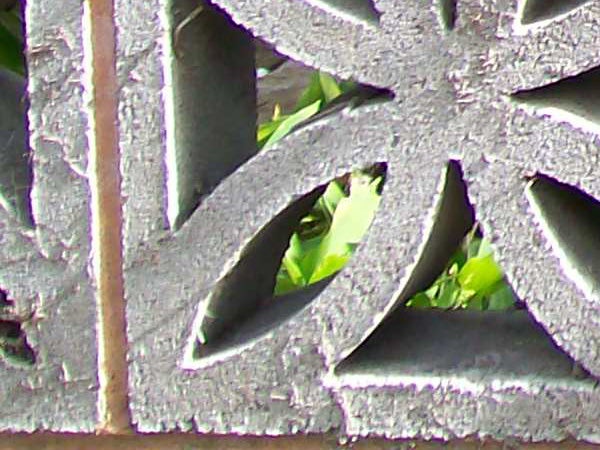 This corner crop shows poor edge sharpness and chromatic aberration, as well as burned out highlights from over-exposure. 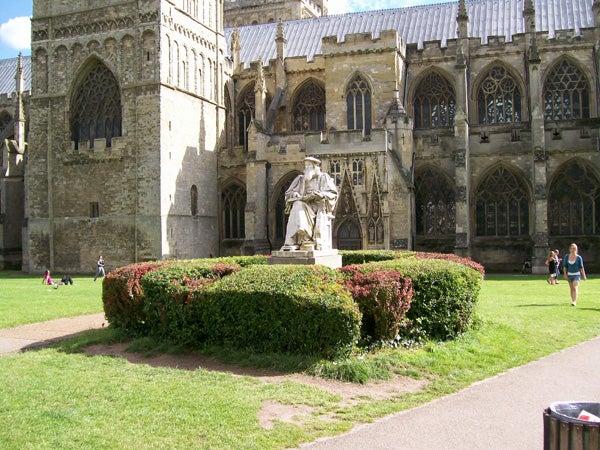 The wide angle end of the zoom is equivalent to 37mm. The full-size version of this image is only 1.1MB, very small for a 7MP camera. 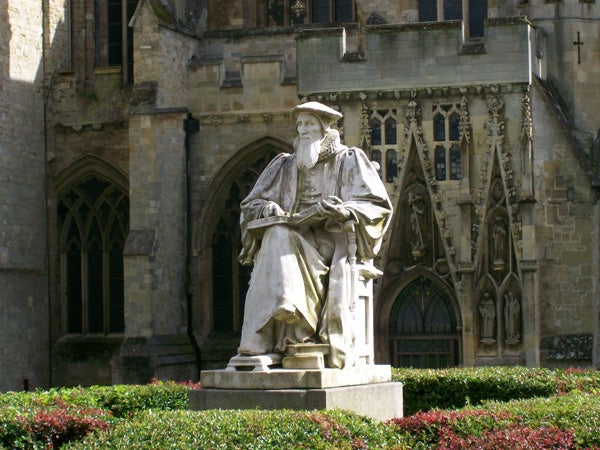 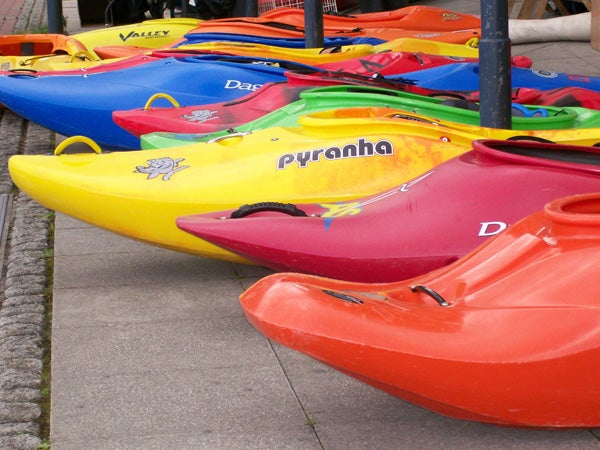 Colour rendition is OK, but blotchy. 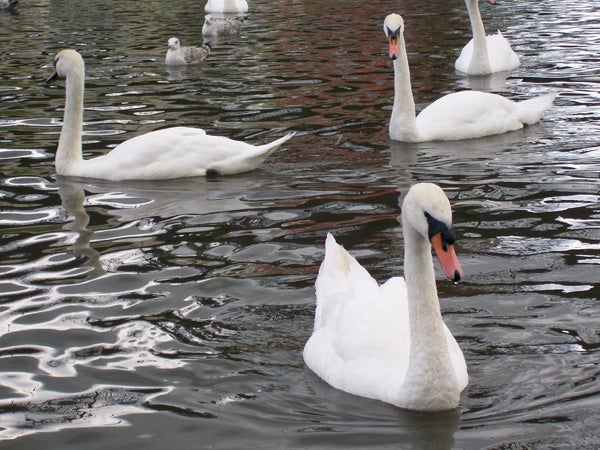 The poor quality metering system and the low dynamic range have burned out the highlights in this shot.