It’s not often we get to test the first machine from a new supplier in an established market, but that’s the case with Kodak’s EasyShare 5300. This is a brand new all-in-one machine, using an ink-jet mechanism designed from scratch for Kodak’s entry into a product area dominated by makers who have been developing printers and all-in-ones for years.


First impressions of the EasyShare 5300 are good. Although it’s a substantial machine, its white and silver livery makes it look neat and modern. A Kodak-yellow key-line under the scanner lid compliments the EasyShare logo, which shows on the large, 76mm LCD display behind the control panel on the right-hand side.


In front of the display are 17, well-captioned buttons, arranged in groups and in varying sizes to indicate their importance. The Scan, Photo and Copy mode buttons are illuminated, so you know which is selected. 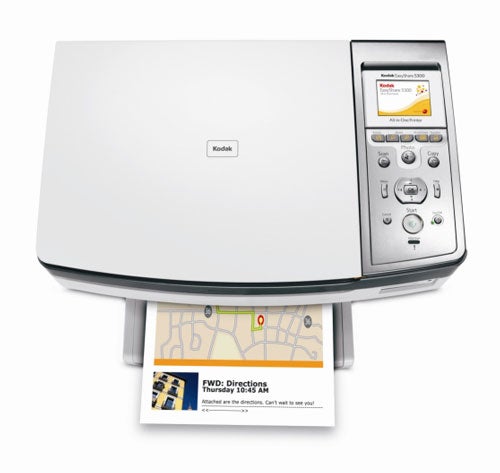 In the front panel are two slots for memory cards, between them taking all the common types, including the MicroDrive. Below that are two USB sockets, so you can, for example, install the optional Bluetooth adapter in one and still have the second available for connecting a PictBridge camera or a memory drive.


The paper tray can take up to 100 sheets of plain paper and has an inset in its top surface for a further 20 sheets of 15 x 10cm photo paper in an integral tray. You push in or pull out this tray to select between the two paper sources.


The all-in-one uses an external, block power supply which plugs into the back of the machine. Our review sample initially made a variety of unusual noises, but settled down as it bedded in.


Setting the EasyShare up involves lifting the main scanner section and clipping the permanent print head into place on its carrier. You then clip the black and colour cartridges into place. The colour cartridge contains five inks. The first four are cyan, magenta, yellow and black and the fifth is a transparent coating, given to all photos, to protect them from light and ozone. The separate black cartridge is used solely for printing text on plain paper.


There are two main pieces of software supplied with the machine: EasyShare and AiO Home Centre. Between the two of them they provide photo housekeeping and simple functions to print to and scan from the 5300. EasyShare itself offers basic photo editing and can be used to add simple effects. 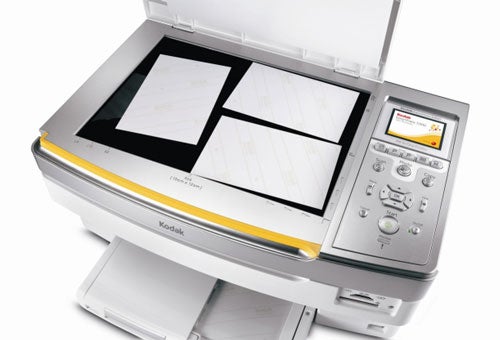 Printing on the EasyShare 5300 is quite snappy, particularly when printing photos. A 15 x 10cm print takes around 45 seconds from either memory card or PictBridge camera and just over a minute from a PC onto an A4 sheet. Printing text onto plain paper is nowhere near as quick as Kodak claims though. It took 68 seconds to print our five-page test document, a speed of 4.4ppm, not 10.5ppm.


The amount of hype applied to print speeds is a scandal, not just for Kodak, but for all the main players. They need to come to an agreement to start again from scratch and quote print speeds for a standard page of text, printed in a normal print mode.

Print quality is reasonable, though there is noticeable feathering of black text on ordinary plain paper, which gives it a slight fuzziness. This is accentuated when printing text over a coloured background. The background colours don’t always saturate the paper properly, either, so you can occasionally see uncoated paper fibres. A copy of our text and graphics page taken from the 5300’s scanner is closer to the original than from many all-in-ones, but the problems with text over colour are still there.

The Kodak printer does much better with photo prints. Our test landscape is crisply reproduced, with very smooth colour gradations, good shadow detail and plenty of fine detail in the foreground, too. Colours look natural and the machine copes well with slight changes in colour.


Despite a flip-over paper support, which pulls out from the front of the paper tray, print jobs of over 10 sheets or so tend to pitch sheets over the top of the tray’s end stop and onto the desk/floor.


When it comes to printing photos from a memory card or camera, you’re limited in what you can do with them. You can rotate and zoom, but not crop, remove red-eye or apply effects, such as black and white or sepia tints. You can copy a photo print from the scanner glass to a PC or a sheet of plain paper, but not to a sheet of 15 x 10 photo paper or a memory card. 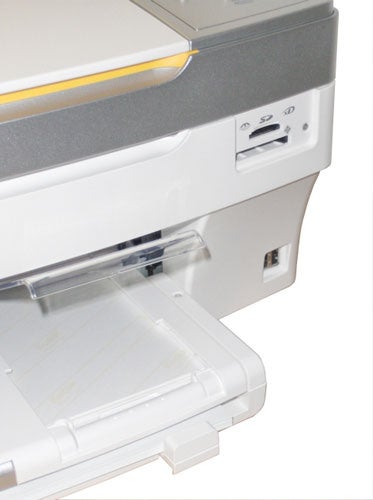 The EasyShare 5300 is also not the quietest of machines, with most actions accompanied by some pumping and winding noise. As usual, the noisiest actions are when feeding paper, and we measured peaks of 62dBA, which is louder than most.


The headline figure that’s been bandied about a lot by Kodak is 7p per print. This is less than half the price of prints from the big four ink-jet makers: Canon, Epson, HP and Lexmark. To get this cost per print, you have to use Kodak’s standard photo paper, 180 sheets of which are available with a colour cartridge in the Photo Value Pack for £12.49. Don’t confuse this with the Premium Photo Value Pack, which costs £13.49 and prints 135 prints from the same cartridge, so 10p per print. The printer auto-detects paper type and uses more ink on the Premium paper.


Kodak claims its black cartridge can produce 340, five per cent black pages, and under test we produced 387, so we have no argument with that figure. From this, we calculate a five per cent black text page to cost 2.28p, not a particularly low cost and appreciably higher than the 1.95p the Canon PIXMA MP600 produced from the same test.

We don’t measure the cost of a 15 x 10cm print directly, unless we’re dealing with a small format printer, which can’t handle A4 paper. Instead, we calculate costs for a 20 per cent A4 colour photo, which isn’t far off the same area as a 15 x 10cm, on a sheet of the manufacturer’s glossy photo paper. For direct comparison with other machines we’ve tested, this cost comes out at 29.4p, the same as for the Lexmark 9350. As we’ve emphasised before, the ink cost in this test is swamped by the price of the premium photo paper. The cheapest price we could find for Kodak’s Premium Photo paper is 24p per sheet.


As the first model in a new range of all-in-ones – the 5500 will be along soon, too – the Kodak EasyShare 5300 makes a lot of good design moves. It’s easy to use, comes with well-written software and produces good quality photo prints, quickly. Although the print cost of 7p is not for the highest quality prints this machine can produce, even those will only set you back 10p, still substantially cheaper than from Kodak’s main rivals. Let’s hope it starts a consumables price war and all photo prints come down to a more reasonable level and lowering the cost of photo paper, wouldn’t hurt either.