A strong, reasonably priced e-reader with a great screen and physical page buttons – but UI glitches haunt the Libra H20 almost as much as Amazon does.

What is the Kobo Libra H2O?

With a large 7-inch 300ppi E Ink display, physical page buttons, IPX8 waterproofing and a £149.99 price tag, the Kobo Libra H2O is well positioned to split the difference between the £230 Kindle Oasis and the £120 Kindle Paperwhite. It also comes in well beneath the £240 Kobo Forma.

All in all, the Kobo Libra H2O offers a comprehensive e-book reader package at an attractive price. Interestingly, this is also the Kobo device that has been chosen to usher in a fresh UI for the entire family.

Unfortunately, one or two performance and software niggles hold back the Kobo Libra H2O from an unqualified recommendation.

We’ve just mentioned that the Kobo Libra H2O falls between the Kindle Oasis and Kindle Paperwhite, and that’s seen most clearly in its design. This e-book reader takes a similar basic design approach to the Oasis and the Kobo Forma, but uses altogether less premium materials.

You get that trademark dimpled Kobo finish to the back, which aids grip if not visual appeal, and the whole plastic make-up of the Libra screams durability over desirability. The recessed power button on the back is both easy to feel out and satisfying to use.

The Libra H20 is more ergonomic than earlier models, with a wider, Oasis-like asymmetrical design that mades one-handed use way more comfortable. One edge is both wider and significantly thicker than the other three (7.8mm versus 5mm).

More significantly, this edge also accommodates physical page buttons. Flipping through pages using the buttons feels far more instinctive and comfortable than using the touchscreen, which tends to be a two-handed process. These buttons are a little clickier than we’d have liked, especially nearer the hinges. If you’re someone who likes to read in peace and quiet, the constant tippy-tappy sound can grow a little irritating – for you and for anyone else in the room.

Despite its new appendage, the Kobo Libra H2O is actually 18g lighter than the Kobo Aura H2O at 192g. That means it’s still 4g heavier than the Kindle Oasis, however. 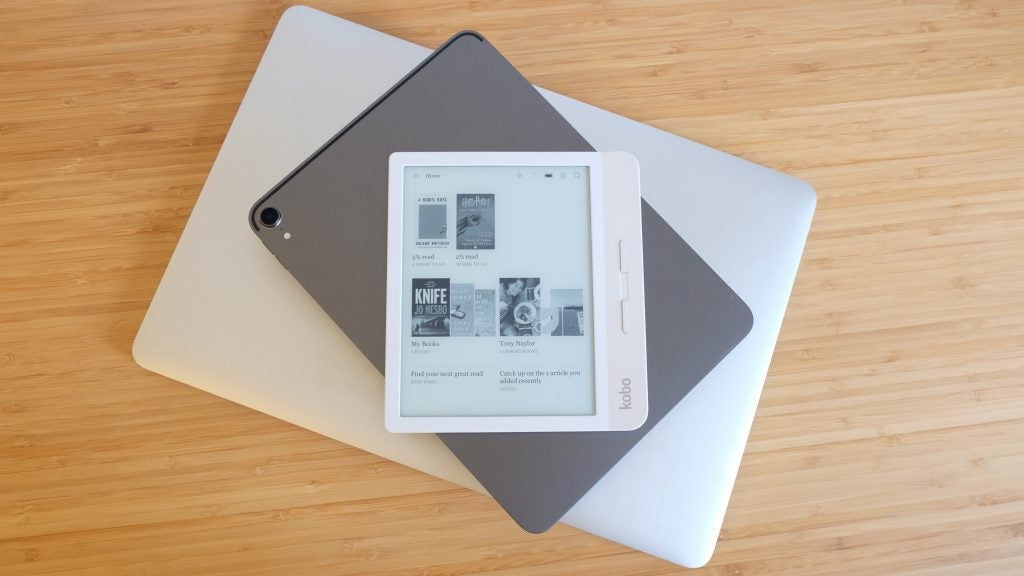 The Kobo Libra H2O features a 7in 300ppi display

This isn’t a meaningful difference in a practical sense, but it might surprise some considering how much cheaper the Kobo looks and feels than its rival. It’s all plastic, with none of the lavish aluminium seen on the premium Kindle. Still, that £80 price difference makes such discrepancies a little easier to forgive.

The Libra H2O retains the Aura H2O’s IPX8 water-resistant rating, hence the “H2O”. This means it’s waterproof for up to 60 minutes in 2m of water, just like the Kindle Paperwhite and the Kindle Oasis. You can read by the pool or in the bath with confidence.

Switching to that thick edge again, it’s a disappointing to see a creaky micro-USB port rather than the more modern USB-C. But if Amazon can get away with using this archaic charging standard, why can’t Kobo?

The Kobo Libra H2O has the second-largest screen in a Kobo to date at 7in. The Kobo Forma previously upped the ante to a whopping 8in, but no Kindle goes that big.

With a 1680 x 1264 resolution that results in a 300ppi pixel density, the Libra matches its rivals (and tops the Kobo Aura H2O) on the sharpness front too. You can even tilt the device on its side, and whatever you’re reading will automatically reorient to landscape. 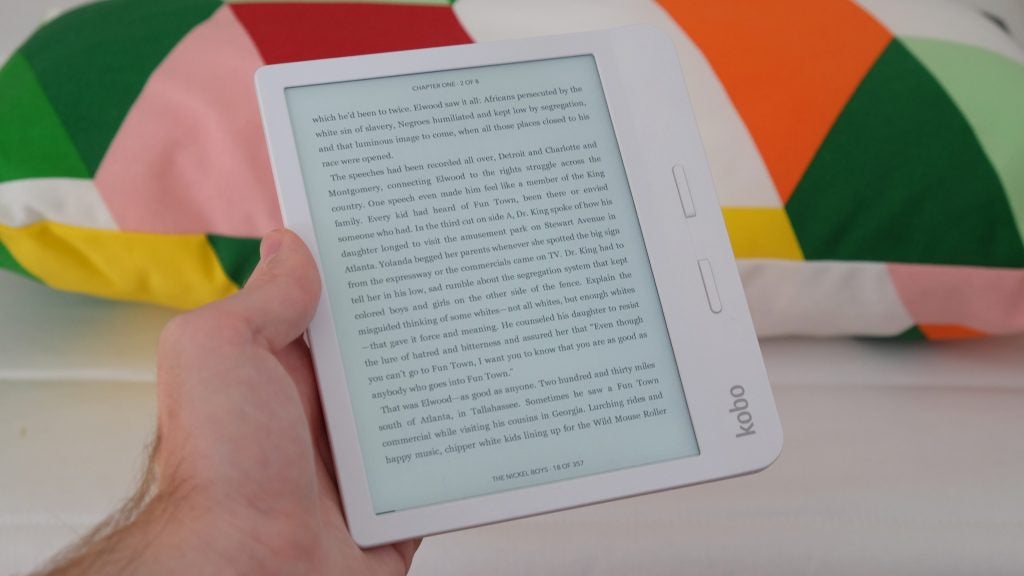 The crisp e ink display is sharp, making for a paper-like reading experience

All in all, we’re looking at another crisp E Ink effort that makes for a much more natural and paper-like reading experience than the LCD technology you’ll find on your tablet. Your eyes simply won’t tire as much from reading a book on this type of display.

The screen will light up from the front in low-light conditions, which makes for a pleasantly subtle night-time reading experience.

Talking of which, Kobo has also incorporated ComfortLight PRO technology, which reduces exposure to sleep-disrupting blue light. In automatic mode it supposedly mimics the sun’s natural progression, but you can customise it to your preferences.

Kobo Libra H2O software and features – An enhanced UI and Pocket integration, but with glitches

Perhaps the most noteworthy new feature of the Libra H2O is its new “enhanced eBook navigation” UI, to which owners of older Kobo devices will also be able to upgrade.

Among other things this makes it easier to re-find your place in an e-book when you want to skim ahead or back. Tap the screen to bring up the scrub bar and drag to a new position, and your current page will be marked on the timeline by a black dot.

What’s more, there’s also a preview pane that will now pop up as you scrub through, showing you what’s on the page without jumping directly in.

Related: Best iPad – which iPad should you buy?

It’s certainly an improvement, and as always we like Kobo’s visual design compared to Amazon’s cluttered approach with the Kindle. But it’s let down by iffy performance and odd visual artefacts, the former of which we’ve criticised Kobo devices for in the past.

Being able to scrub through pages is a great idea, but here it’s accompanied by an ugly glitchy ghosting effect. This might be a bug that’s solved with subsequent updates, but at the time of writing it has proved quite distracting. Meanwhile, you have to take your finger off the scrub bar to see the preview, which seems to run slightly counter to its purpose.

Indeed, there’s a general glitchiness throughout the Kobo Libra H2O’s UI, and a pronounced sense of wallowiness. It’s largely fine when you’re flipping through pages in a linear fashion – which you will be most of the time – but don’t expect a tablet-like snappy experience when flicking quickly to a new task or menu. 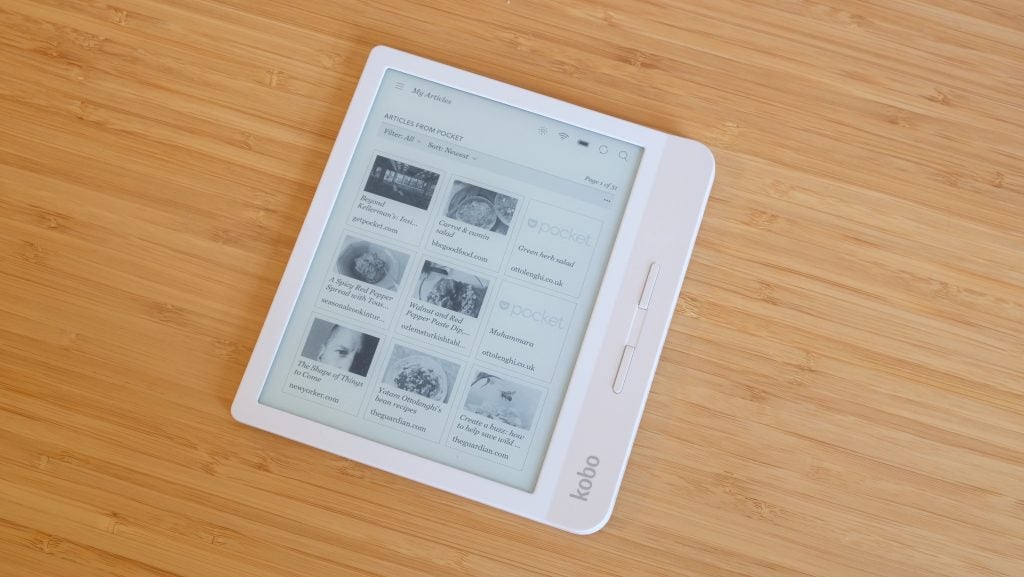 Issues aside, the Koba Libra H20 UI remains pleasantly clean and intuitive to use. It doesn’t get in your face with recommendations or suggested services half as much as Amazon’s equivalent.

It also provides a number of neat additional features. You still get Pocket integration, for example, through which you can read any saved web articles. We liked being able to add long-form web content to our usual e-book diet, and such articles were much more pleasant to read in this way than on our phone or tablet. Image-heavy content, not so much.

OverDrive support, meanwhile, lets you access your public library’s digital catalogue – provided they support the system – from your Kobo, essentially allowing you to “borrow” e-books. All you need is a library card, an OverDrive account and a Wi-Fi connection to get started.

The Kobo store, meanwhile, remains well stocked with most of the biggest releases, with one or two exceptions. What isn’t there you’ll probably be able to source from elsewhere on the web. Kobo continues to make devices that are way more open than their Kindle rivals, with support for 14 file formats including EPUB and PDF.

Of course, you don’t get access to Amazon’s vast, easy-syncing library, which includes many straight-to-Kindle releases. Your mileage will vary in terms of whether that’s any kind of issue, but it’s hard to contend with the big A’s e-publishing clout.

You’ll also have to forego the Kindle’s audiobook support, which could be more problematic for some. Conversely, this means that the bundled 8GB of storage should be more than enough for most people’s needs, since there won’t be any chunky audio files clogging things up.

Kobo makes its usual claim of “Battery life that lasts for weeks” depending on individual-use cases. That’s certainly possible if you load up the device with books and simply work through them.

If you’re someone who regularly browses for books on the Kobo store and hops between elements of the UI – between your Pocket articles and OverDrive loans, for example – you’ll see that figure coming down dramatically. Just five minutes of browsing the Kobo store and using its handy recommendation tool dropped our unit’s battery life by 2%, for example.

Of course, all e-book readers are at their happiest and most frugal when dumbly flipping through e-book pages, and the Kobo Libra H2O is no different. Keep things light, as intended, and you won’t have to worry too much about finding a wall socket.

Should I buy the Kobo Libra H2O?

The Kobo Libra H20 is a well equipped all-rounder of an e-book reader with a feature set that’s ostensibly in the same ballpark as the Kindle Oasis, but available for £80 less.

At the same time we harbour reservations about the Libra H20’s plasticky build and sluggish, slightly glitchy UI. Ultimately, Amazon continues to provide the e-reader benchmark in terms of its polished hardware and extensive ecosystem.

A strong, reasonably priced e-reader with a great screen and physical page buttons – but UI glitches haunt the Libra H20 almost as much as Amazon does.