What is the Kobo Forma?

Hoping to counter Amazon’s dominance in the e-reader space, Kobo’s latest is a feature-packed device with a waterproof body and high-res screen.

It also offers a unique design, making it stand out against the traditional Kindle. Nevertheless, a high price and slightly slow interaction mean it just falls short.

The Kobo Forma is unorthodox in its appearance. Instead of being a flat slab of plastic – the form of so many e-readers on the market – the Forma curves slightly at the side. Its display is also shunted off to one side in a manner similar to the Kindle Oasis.

The curved edge is strange at first. Following a few hours of reading, though, it will become more natural. It most closely compares to a book that’s been folded over on itself, being gripped from the side. The curved edge is home to two buttons: one for going forward and one for going back. This is a nice touch, one that offers some tactility to turning pages. 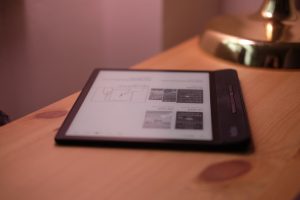 Another headline feature is the IPX8 waterproof rating. It means you needn’t worry about accidentally dropping the Kobo Forma into a pool on holiday, in a bath, or just having it out in the rain. It’s a welcome touch that really should become more common across all e-readers. Still, the new Kindle Paperwhite 2018 also boasts waterproofing and it costs a lot less at £119.

The Forma is a large e-reader, more so than the Kindle Paperwhite or the Kobo Aura. It’s more the size of an iPad Mini, but with a lighter feel. It’s comfy to grip and light enough to hold for extended periods.

It’s clear that Kobo has tried to set the Forma apart from the Kindle crowd and I appreciate having an alternative option when looking for an e-reader.

That said, the Kobo Forma doesn’t excel in every area on the design-front, especially with regards to the quality of the build. 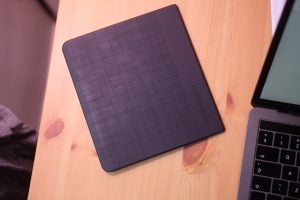 For a product that costs £239 – which is super-expensive when you consider the excellent Kindle Paperwhite is just £119 – the Forma lacks a high-end finish.

The mushy power button is virtually impossible to reliably press without a really hard push and it constantly feels stuck.

The overall design is a little on the ugly side, with the perforated plastic picking up everything from dust to smudges in an instant. Compared to the metal-clad and rather gorgeous KIndle Oasis, this is a serious step in the opposite direction.

Dominating the front of the Kobo Forma is an 8-inch display. While the design might be pedestrian, the display is truly gorgeous.

Like other e-readers, the screen is E Ink rather than LCD (the screen type you’ll find on most phones and tablets). This gives it the look of paper and is much kinder on the eyes than the display of your smartphone. If your eyes tire quickly when reading on a phone then an e-reader is for you.

Not only is the screen big, it’s high-quality too. The 1440 ×1920 resolution leads to a 300ppi (pixels per inch), with text crisp and individual pixels virtually impossible to spot. 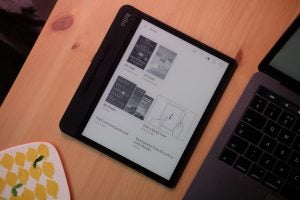 By default, E Ink screens aren’t backlit – one reason for such a display being kinder on your eyes. However, the lack of a backlight means that, as is the case with a paperback – you’ll need some form of light to read at night. To combat this, there’s a bunch of LEDs around the display that spread light.

The display is evenly lit when these are enabled, plus there’s a really good range of brightness levels.

The Comfort Eye mode is another welcome addition, which bathes the screen in an orange hue, to make night-time reading more comfortable on the eyes.

Unlike Amazon’s range of Kindles, Kobo’s device is far more accepting of a range of file types. You’re not restricted to just the store on the e-reader; you can load any ePUB files you own and even books from supported libraries.

This more open nature leads to other benefits, too. There’s Pocket integration on the Forma, which enables you to save interesting articles from the web and then read them wherever you are.

The basic UI is great: easy to navigate, visually interesting and heavy on the imagery. It doesn’t try to push new and suggested reads on you quite as frequently as the Kindle, instead focusing on books you already have. 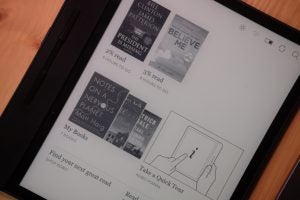 It’s a shame then that, in use, the Forma feels a bit sluggish. The screen struggles to refresh quickly and I often found myself having to tap multiple times for the device to acknowledge my intentions. It’s frustrating.

Accessible through the Forma or via the web, the Kobo store is the main way to get books onto the e-reader. If you’re a fan of reading popular novels then you’ll likely find what you’re looking for here. Where the Kobo falls behind the Kindle is in terms of books that are published directly to the Kindle store. Lots of lesser-known titles that make the Kindle store so good are just completely absent.

Neither does the Forma support audiobooks. Hardly a surprise but worth noting, especially since both the Kindle Oasis and Kindle Paperwhite support Audible.

Judging the battery life of an e-reader is far more difficult than that of a phone, tablet or laptop. This is because e-readers are designed to last weeks, rather than hours or days. Kobo claims you’ll get multiple weeks from a single charge; I haven’t had to charge the device following an initial power-up.

This is with about an hour of reading over my commute each day for a couple of weeks. Spend more time with Wi-Fi connected, or browsing the Kobo store, and the battery life will take more of a hit. 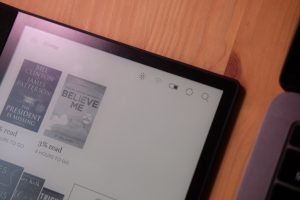 The tablet charges via a micro-USB port, and the required cable is included in the box. A full charge is likely to take around 2 hours. It would have been nice to see Kobo make the switch to the reversible USB-C plug found in so many modern devices these days – but that’s not the case.

Why buy the Kobo Forma?

The Kobo Forma is a good e-reader. It has a lovely big screen with a crisp resolution and a design that offers something different to your typical Kindle.

It’s just a shame then that it’s let down by a slow UI and a price that’s far too high for the quality of device you’re getting.