When Kobo announced the Arc 10HD it said it would ship with an ‘uncompromised’ version of Android in a clear dig at Amazon’s decision to overhaul the operating system for its Kindle Fire tablets. It doesn’t take long to realise that it’s not an entirely untouched version of Android 4.2.2 Jelly Bean, however, even if you do get access to the Google Play store and its superior collection of apps. 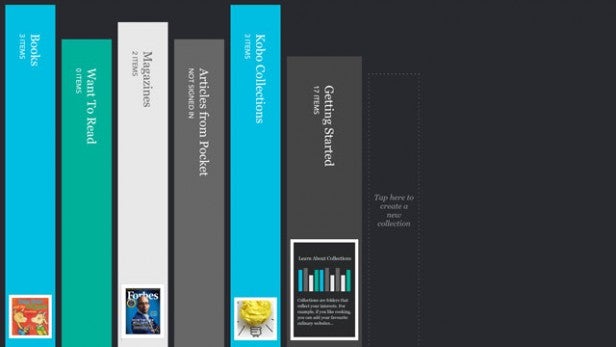 There’s just the three screens instead of the standard five homescreens on stock Android. On the taskbar at the bottom you’ll find home, multitasking and back buttons grouped together in one corner and voice search, Google search and app launcher huddled together in the other.  Swipe over to the second homescreen and you’ll find a huge Kobo widget giving you access to content, but which annoyingly cannot be removed. The last homescreen is dedicated to housing all of your reading content in a virtual bookcase where magazines, ebooks, articles from the recently acquired Pocket, a book wishlist and user manuals can be organized.

Kobo packs plenty of pre-installed apps including Skype, Facebook, Twitter, YouTube, Rdio, 7Digital, PressReader to access over 2,000 newspapers and even includes a ‘Get Apps’ icon in case you are struggling to find your way to Google Play. If you are a buying a tablet for the first time it’s a nice, varied batch of apps to get you started. 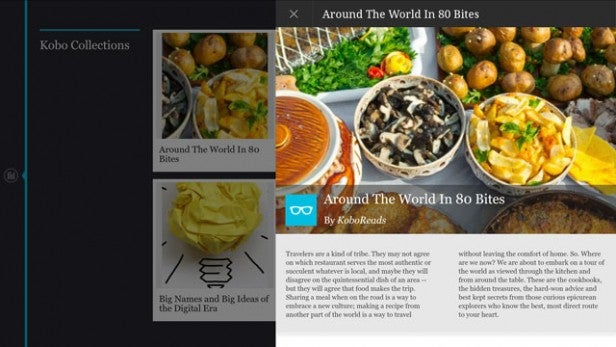 Kobo is all about ebooks so you can expect some extra bookworm-friendly features like Kobo Collections helping you to find new books and Reading Mode. This feature essentially turns off Wi-Fi, email, social network notifications and anything else that’s likely to interrupt your reading session. You can also schedule the Reading Mode for certain times of the day to make sure you stick to it each day as well. It sounds a bit like a glorified airplane mode, but will help to conserve the tablet’s battery life.

When you delve into an ebook there’s Beyond the Book, which sounds a bit like Amazon’s X-ray feature where you can highlight words and passages to access background information on the book. TypeGenius lets you adjust the type and size of a series of different fonts to make it more comfortable to read.

As a slightly skinned Android operating systems go, the Arc 10HD is
relatively easy to get to grips with and it’s a familiar experience you
can expect to have with most other Android tablets. 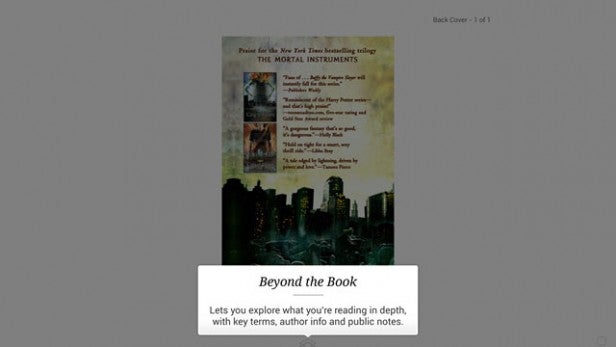 The Arc 10HD is certainly no slouch in the power department thanks to the Nvidia Tegra 4 quad-core CPU clocked at 1.8GHz with 2GB of DDR3L RAM. We’ve seen a few Tegra 4 tablets this year and most have delivered a super-fast performance. The same can similarly be said of the Arc 10HD. It zips through homescreens, boots up apps nice and quick, handles running multiple apps with little issue and is generally a very slick performer.

It’s worth remembering that that the Note 10.1 2014 edition packs an Exynos Octo-core CPU while the Nexus 10 features a dual-core CPU, 2GB RAM and a quad-core Mali T604 GPU. It performs much as we expected from a Tegra 4-powered tablet, but doesn’t blow the competition out of the water.

In real world use, however, the slight dip in performance against the Samsung shouldn’t concern you greatly. The Tegra 4 processor is more than fast enough to play the latest games with ease.