The T5 II are similar to the original, but Klipsch has made some sensible design tweaks and they now offer even better mid-range and bass performance than before. They're susceptible to sibilant tones though, and at this price we'd expect active noise cancellation to be supported.

They cost £185, putting them in direct competition with some of the very best true wireless earphones around, including the much-loved Sony WF-1000XM3.

The Klipsch T5 II have a few notable highlights, including an unusually close focus on the mid-range and excellent low bass and sub-bass. However, they lack the one feature that the majority will want, active noise cancellation, and are surprisingly prone to sibilance given these are otherwise slightly darker-sounding earphones.

Klipsch T5 II design and comfort – Plasticky, but they offer a solid fit

The most striking part of the Klipsch T5 II design isn’t the earphones themselves, but the case in which you put them in. Just like the Klipsch T5, the charging case has a shell finished in brushed aluminium, with a flick-up lid that makes it feel like a Zippo lighter.

This case is larger and heavier than most, but there’s charm here if you’ll value it over a case you’ll barely notice in a pocket. 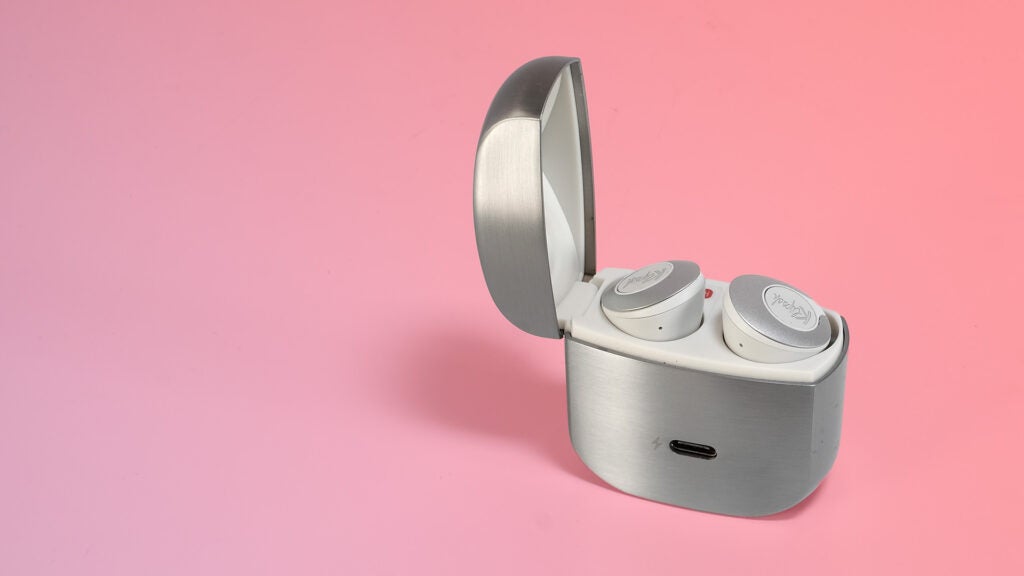 The Klipsch T5 II earphones themselves are much less notable. They’re mostly plastic aside from a little cap of aluminium, which hasn’t been particularly well applied. A slight gap between the thin aluminium piece and the plastic on which it’s mounted makes a cosy home for dust, fluff and grime, and makes me wonder if these caps might – if you’re unlucky or careless – start to lift off after a year or so.

Still, the Klipsch T5 II are light, and stay in place perfectly well during runs, even though their tip style isn’t the easiest to fit. These earphones use proprietary tips with a hard plastic ring on the inside of the tip, which anchors into the earpiece aperture.

This means you can’t use tips from an old pair of earphones, plus the Klipsch T5 II have a tapered oval shape that doesn’t give you the best feel for exactly where they’re meant to fit in your ears. They can be pushed deep. Or not. This isn’t such a problem in itself, but these earphones’ sound is unusually sensitive to a bad seal, and can seem harsh in the higher frequencies without a good one. 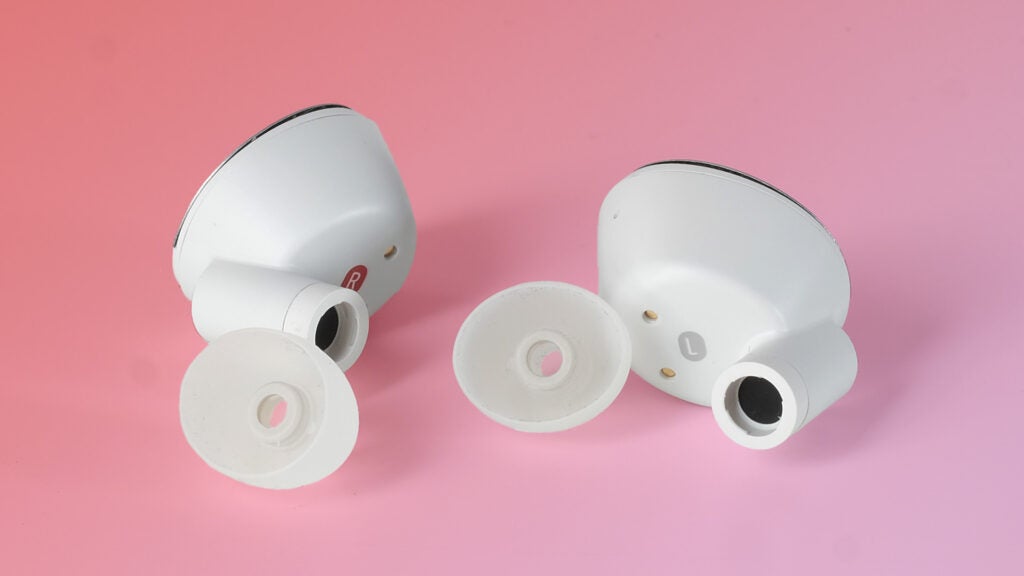 Some improvements have been made since the original Klipsch T5, however. Like that model, these earphones have a single button on the back of each earpiece for pairing and to use as a mini remote control. Unlike last time, the button isn’t so stiff that you end up pushing the Klipsch T5 II further into your ears just to depress the button.

Klipsch T5 II features – Good set of specs, but ANC is missing from the list

The Klipsch T5 II offer IP67 water-resistance, meaning they’re not just sweat-resistant but can survive being submerged in water.

They have aptX support for higher-quality streaming and beam-forming microphones, used to reduce noise when you take hands-free calls. You can see their little cut-outs on the back of the earpiece – there are two for each side. 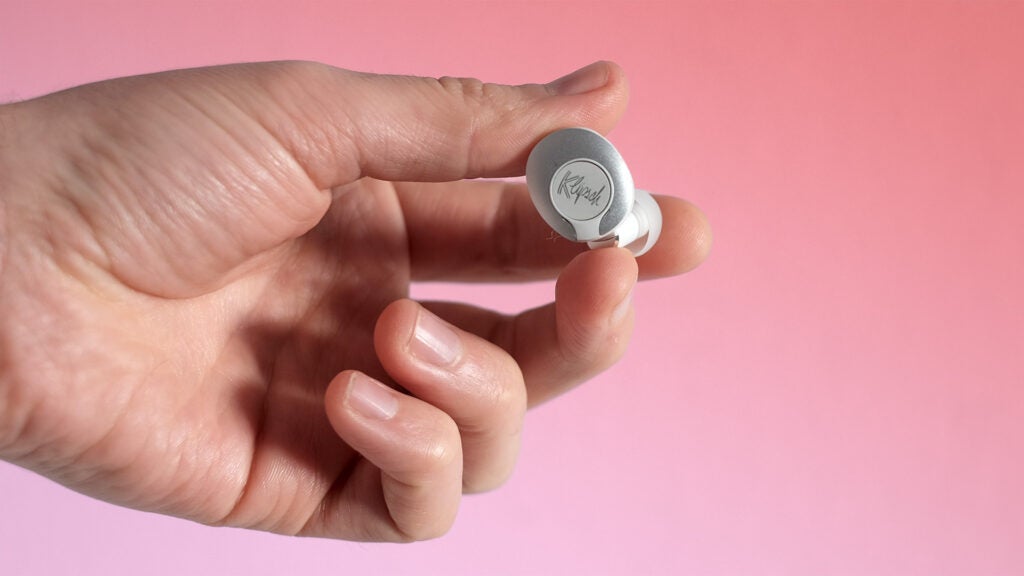 These earphones also have a transparency mode, which feeds some ambient sound through the speakers to let you hear the outside world more clearly without having to take them out of your ears.

However, one core feature is missing: active noise cancellation. This is now all-but a standard inclusion in true wireless earphones of this level. Higher-end Sony, Huawei, Apple and Bose earphones all have it. ANC is a brilliant feature if you tend to listen on busy roads, in trains or buses. The lack of cancellation is the best reason not to buy the Klipsch T5 II. 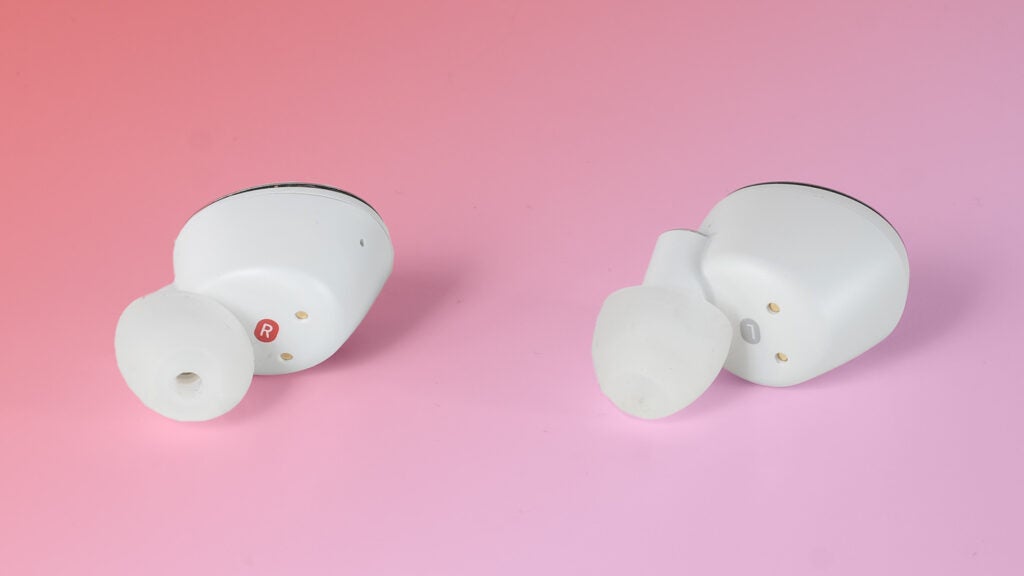 Why doesn’t Klipsch use active noise cancellation? This isn’t a feature you can simply slot in, as many manufacturers might do with a new Bluetooth standard, by using a newer chipset. None of Klipsch’s earphones have ANC, suggesting the company hasn’t carried out the necessary research and development for ANC yet, or is in process of doing so.

Klipsch says the T5 II battery lasts up to eight hours. In my tests, one of the earpieces ran out of charge after 6hrs 10mins, and that’s with an interruption-free music stream. However, I had the same issue with the original Klipsch T5 earphones, and this was eventually solved with a firmware update. And even the lesser stamina I’ve seen isn’t too bad for a true wireless pair. Still, if you’re told you’ll get eight hours, you ideally want to see eight hours at moderate volume.

The Klipsch T5 II have 5mm dynamic drivers, among the smallest you’ll find in a pair of earphones. However, don’t go thinking this means their sound is weak and low on bass.

These earphones have a slightly darker than average tone, with rich bass and exceptional sub-bass control. I compared them directly to the Lypertek Tevi, some of the best-sounding £100 true wireless earphones. The Klipsch earphones’ smooth stratification of low and sub-bass frequencies is in a completely different league. It gives electronic music – which tends to have the cleanest and clearest use of sub-bass – real authority and depth, more so than almost any other rival.

This bass handling isn’t what defines the Klipsch T5 II sound, however. The mids do. 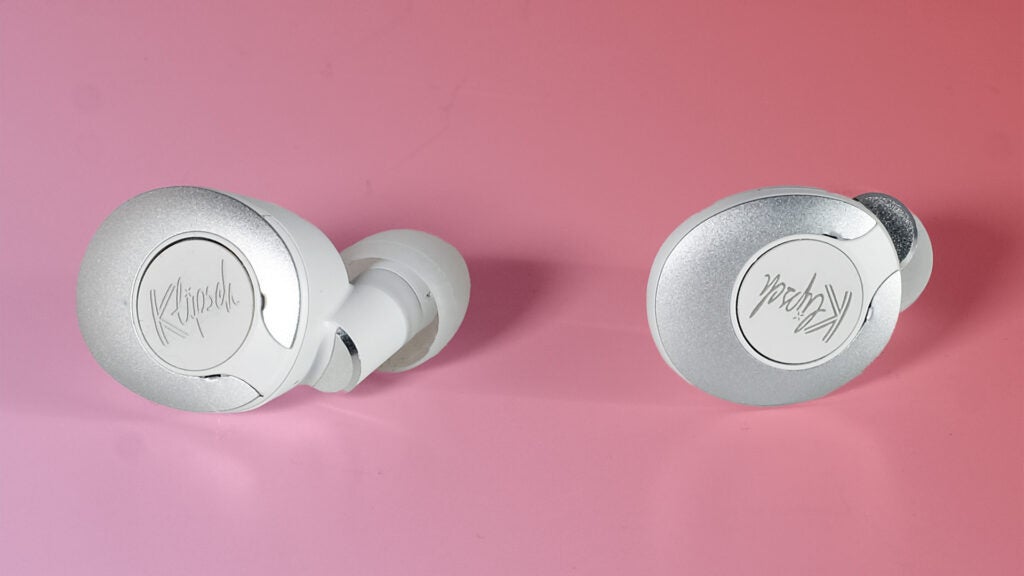 The Klipsch T5 II are one of the few mainstream pairs of sub-£200 true wireless earphones that focus primarily on mid-range reproduction. A common tactic in other such earphones is to have an upper mid-range emphasis that lets you appreciate the detail in vocals, but that doesn’t lead to a true representation of the mids as a whole.

Klipsch’s approach is more ambitious, one that treats all parts of the mid-range as holding equal importance. You can only truly appreciate this in tracks with vocals recorded to sound “natural” – I tend to head to the early albums of Randy Newman for this kind of testing. The Klipsch T5 II relay his baritone voice with the kind of tonal maturity you just don’t often hear elsewhere among true wireless earphones.

This is evidence that Klipsch’s tuning goals aren’t just about what your ears will appreciate at face value, but what is technically “right”. 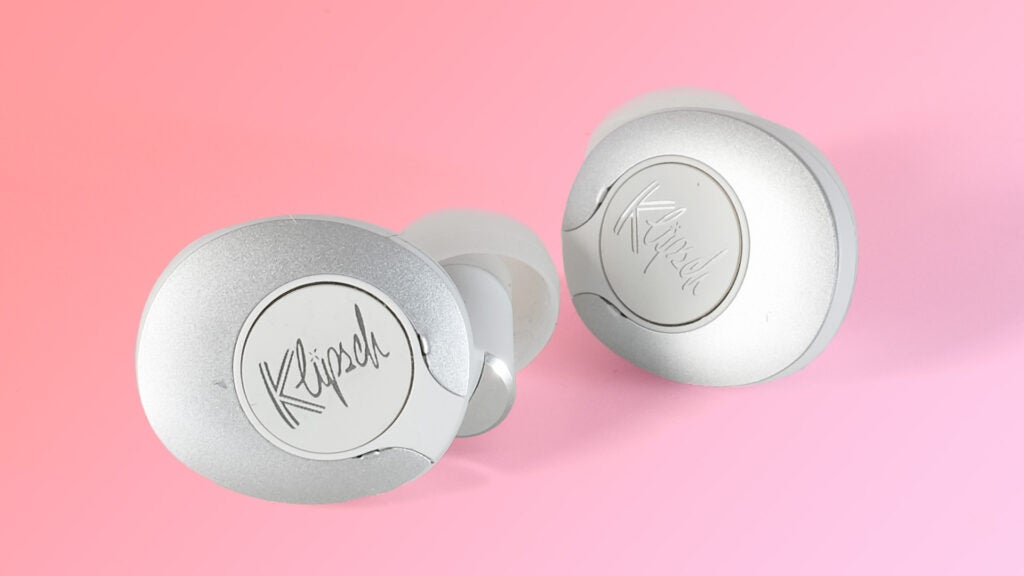 Not every aspect of the Klipsch T5 II tuning is perfect, though. These headphones seem to have a narrow treble spike that can set off unsightly sibilance in some music, usually caused by “ess” sounds in vocals, splashy cymbals and hi-hats. This is likely used to offset the otherwise slightly dark sound character, but these higher frequency flare-ups are disappointing in earphones that have been clearly tuned carefully in other areas.

The Klipsch T5 II aren’t the most dynamic and lovely sounding earphones, either. Sound width, vibrancy and imaging aren’t on the same level as the Sony WF-1000XM3, and for zesty fun the cheaper Lypertek Tevi are arguably better. Cheap thrills are not the goal here.

You should buy the Klipsch T5 II if…

Sometimes the appeal of a headphone is in its looks, and while the earbuds themselves may look a touch prosaic, plenty of attention has been paid to the eye-catching case.

In need of an upgrade. The Klipsch T5 II are similar to the original T5 earphones, with some sensible design tweaks and even better bass coherence, and sub-bass control and poise

You shouldn’t buy the Klipsch T5 II if…

Even with the T5 II’s performance, I’d likely still recommend the Sony WF-1000XM3 to most as they’re more lively and dynamic.

For all their admirable tuning, the T5 II are susceptible to certain kinds of sibilance, too.