Klipsch is a brand that many of our UK and European readers might not be familiar with, but most of our American readers have most likely come across the brand towards the top end of the speaker market. Klipsch has manufactured computer speakers for a fair few years now and has won many awards in the US during that time.


The first speaker set to make its way to the UK looks like a fairly modest setup at first glance – the set is only made up of three speakers, which by today’s standards isn’t considered to be anything out of the ordinary. However, if you’re looking for a set of speakers that is fairly easy to set up and doesn’t leave a trail of cables all over your room, then the Promedia GMX A-2.1 might be just the ticket. 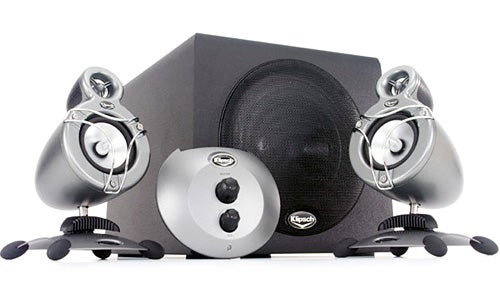 What you get in the box is a massive subwoofer with a solid wooden casing, two fairly small desktop speakers, a control pod and some wiring. It sounds like a pretty standard 2.1 channel speaker set, but the sub really is massive, and as a result, it’s capable of producing the kind of base that will shake your house and get the neighbours banging on the wall.


Setting the speakers up is very straightforward, with the subwoofer acting as the main connection hub. The cables that connect the satellite speakers to the subwoofer have a single RCA jack at one end – this connects to the satellite speaker – while at the other end are bare wires that insert into the spring clips on the sub. This makes it easier to attach the satellites, but it also means that you can’t replace the speaker cables easily. The supplied cables are pretty standard, and it’s a shame to see that a high-end manufacturer like Klipsch hasn’t bundled some quality speaker cable with this set. 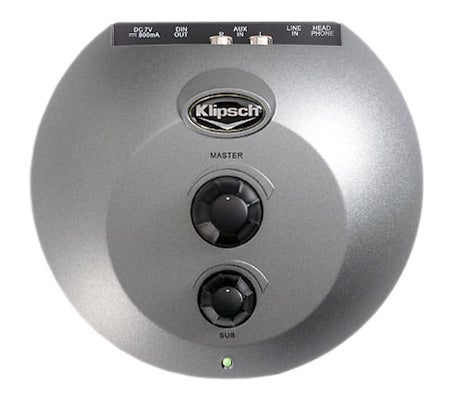 
Klipsch provides an audio cable with a 3.5mm jack at each end, but the control pod also accepts stereo RCA inputs. There’s also a headphone socket on the control pod and the speakers are automatically muted when a pair of headphones is attached. The control pod still controls the volume when headphones are plugged in.

Each of the satellites are made up of two speakers, one 3in midrange and a 0.75in tweeter. Klipsch has definitely spent some money on the design, which is both different and very stylish. Some people may not like the design, but everyone in the office thought that it had a retro 1940s chic to it, that looked pretty good. The open cone design is less desirable though – leaving speaker cones unprotected may look good, but it’s all too easy to damage them by accident. The metal brackets around the cones won’t prevent pointy objects from damaging the speakers, which a normal speaker grille would.

The supplied stands have rubber feet to reduce vibration and to protect the surface you place the speakers on. The top of the speakers are also coated in rubber to improve the grip when you want to move them around. Klipsch has also incorporated a ball and socket joint in the speaker base, so they can be set to almost any angle. But I’m not sure why you would need to angle your satellites in this way, since they’re likely to be on the desk directly in front of you. 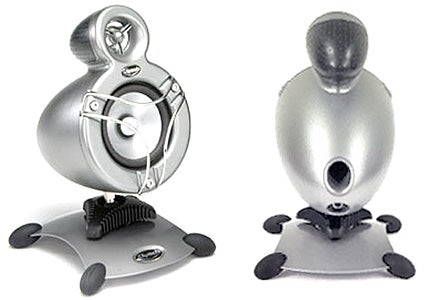 The subwoofer features a 6.5in cone, which produces a very powerful sound. This is also were the power amplifier is located and Klipsch rates this at 75W, which is indeed very powerful for a set of PC speakers. Amazingly though, if you don’t think the GMX A-2.1 set has enough bass, Klipsch has fitted a subwoofer output so you can connect up a second subwoofer for some truly earth shaking low frequencies.


As I used these speakers at home during the testing, I got a lot of grief from my wife – she decided that they were far too loud, although the target market would probably see that as a good thing. When I turned to volume up, the wall in my living room actually started to vibrate, which probably wasn’t appreciated by my other half. 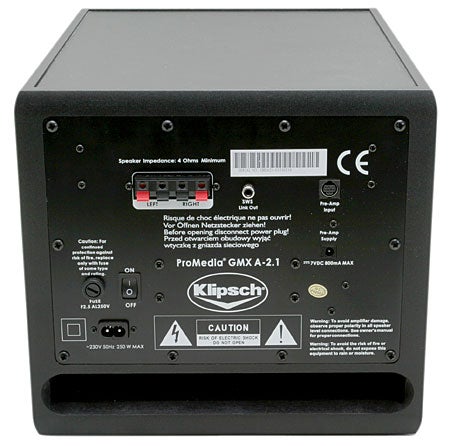 The GMX A-2.1 works well for everything from music and movies to games, but the sound isn’t quite as pure as the excellent Logitech Z3s. Don’t get me wrong, the Klipsch speakers are far more powerful, but it’s this thumping power that makes music sound and ambient movie effects sound a little less clear. Of course this depends on what sort of sound you want from your speakers, and if wall shaking, pumping base is what you’re about, this Klipsch set should suit you well.


The Klipsch Promedia GMX A-2.1 speaker set isn’t for everyone, but I for one have definitely come to the conclusion that you don’t need a 7.1-channel speaker set for great sound from games and music. It’s not that surround set-ups don’t sound great, but the cables that end up surrounding your desk and chair are for many, just not worth the hassle. I have a 5.1-channel set-up in my front room, but I really don’t need that for my PC.


That said, having got used to watching movies in 5.1-channel Dolby Digital it’s hard to go back to a stereo environment. However, for games and most music, the GMX A-2.1s are very good. 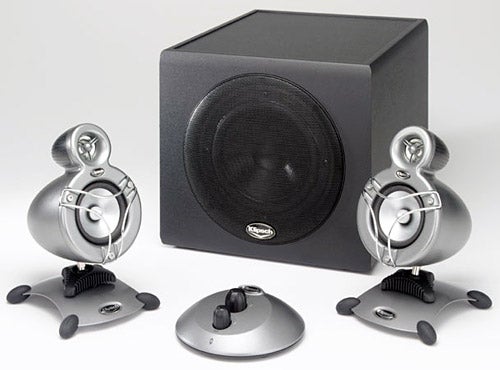 There is of course the issue of pricing and at £99 these speakers are definitely not cheap. It’s true that you’re getting a very special speaker set for that money, but when you consider that you can pick up a set of Logitech Z3s for half that cost, the Klipsch Promedia GMX A-2.1s seem like an expensive luxury.


Klipsch has produced a beautifully designed set of 2.1-channel speakers that sound great with oodles of bass on offer from the huge subwoofer, if that’s what you look for from your audio. That said, the price is high, and there are other 2.1-channel systems around that offer similar performance without the high cost. As with anything though, if you want something a bit special you have to pay for it, and for many PC enthusiasts, that would be reason enough to go for the Klipsch setup.