What is the Klipsch KG-300 Wireless?

American loudspeaker company Klipsch is better known for its home cinema speakers than it is its gaming headsets. In fact, the KG-300 is only one of two gaming headsets the company makes: it has the wired KG-200, and this premium wireless model.

The KG-300 may well offer wireless functionality for quite a reasonable price, but odd design choices and strange quirks mean that it can’t compete with the likes of Turtle Beach and Kingston. The wireless transmitter is unnecessarily large, the headset uses AAA batteries rather than being rechargeable, and you need a separate adaptor for it to work with an Xbox One (despite Klipsch claiming compatibility the on box).

The headset itself is much lighter than most other wireless gaming cans, which makes them comfortable to wear for long periods of time. However, everything about it feels cheap: the plastic outer shell is basic, the headband doesn’t tighten enough, and the mesh padding feels cut-rate – far from the premium features you’d expect on a mid-range headset.

The sound from the KG-300 is good but unremarkable, although it does boast Dolby Digital decoding, Klipsch’s own surround sound processing and four audio presets. Overall though, it’s a mediocre wireless gaming headset at best, and a missed opportunity for Klipsch. 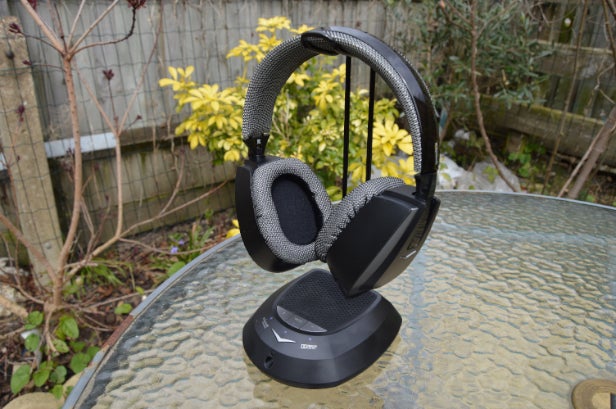 For many gamers, the wireless gaming headset is an accessory that’s remained just a little bit out of reach thanks to typically high prices. However, the market is certainly getting better, with headsets now hitting the sub-£100 mark, like the Turtle Beach Ear Force Z60 at just £99.99.

Klipsch’s KG-300 costs slightly more at £159.99, but it’s much cheaper than the likes of the Turtle Beach Elite 800 at £250. They work with PC, Mac, PlayStation consoles, the Xbox 360 and mobile devices – basically everything except the Xbox One (which needs a separate adaptor). 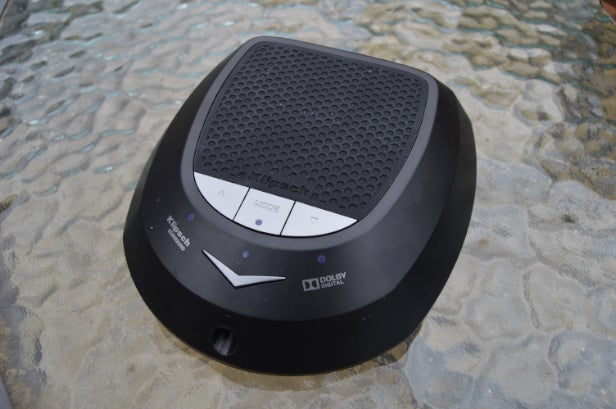 To set up the Klipsch KG-300 optimally, you need to plug the transmitter into a USB port for power, and connect an optical audio cable to your device for Dolby Digital sound. If your computer or device doesn’t have an optical output, you can either just connect over USB (as we did on our Macbook while we wrote this review) or you can use a standard 3.5mm audio cable, although these methods aren’t compatible with surround sound. Thankfully, the KG-300 package comes with all of the cables you need.

The wireless receiver itself is needlessly big, especially compared to its competitors. Most wireless headsets from Turtle Beach’s Stealth 500X boasts a transmitter that’s the size of a pack of cards, while the Z300’s is even smaller at about the size of a USB pen drive. The Klipsch transmitter is much, much bigger. In fact, it’s almost as big as the Turtle Beach Elite 800X receiver, and that charged those headphones as well.

The size of the unit on the KG-300 might be due to the fact that you can plug in an optional stand and hang your headphones when you’re not playing. The transmitter does have one nice feature though; you can share audio to another set of wired headphones using the headphone socket on the front. 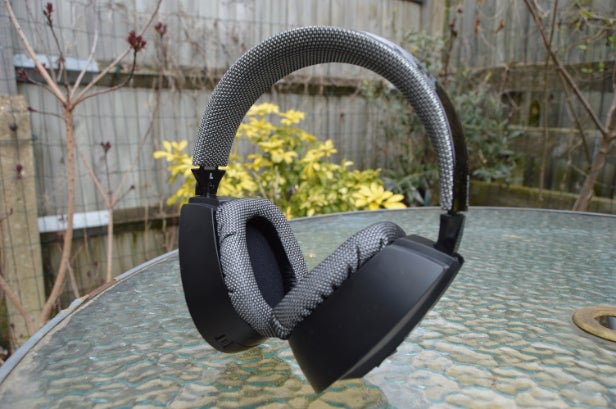 Klipsch has also made some interesting design choices when it comes to the headset itself – whether or not they’re a good thing will depend on your personal tastes. The headset is really light at 246g; the Turtle Beach Elite 500X is over 50 per cent heavier at 372g. However, it also feels a bit cheap and plasticky, and closer to a budget headset than a premium one.

Another feature that will divide opinion is the power supply. The KG-300 uses three AAA batteries, rather than its own rechargeable battery. This is good in many ways – the package comes with three batteries to get you started, they’re relatively cheap to replace, and you can buy rechargeable batteries if you like.

However, there are some serious drawbacks to this approach. Battery performance wasn’t great – we got about nine hours from the included batteries, and around five when we used rechargeables. You also lose out on the convenience of just plugging the headset in to charge when you’re finished gaming–with the KG-300, there’s always the fear that the batteries are going to give up in the heat of a multiplayer gaming session. This happens without warning, as the headset gives no indication of when the batteries are running low. When they do run out, they’re fiddly to remove, often becoming lodged in even when you give the headset a shake. 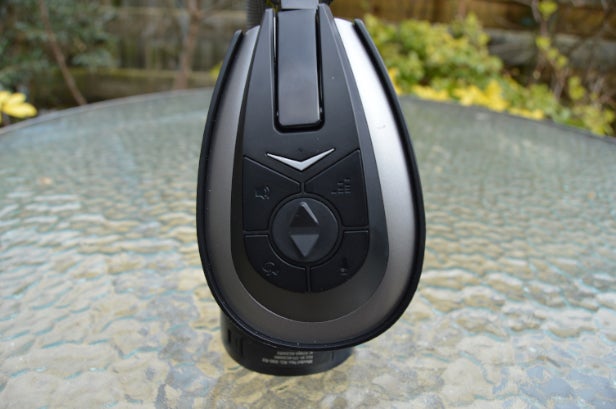 At least the unit is relatively stylish, at least next to other gaming headsets. Turtle Beach in particular tends to adorn its headsets with bright colours and obnoxious logos, but the KG-300 is understated in cool grey and black. Only the buttons on the right earcup really give away that it’s a gaming headset. These buttons are all quite large, but thankfully there’s little chance of accidentally pressing them. However, because all of the symbols are black coloured, they’re impossible to see in low light, so you really need to learn the location of each one over time.

The KG-300 is a mid-range headset, so it’s disappointing just how basic and workmanlike it feels. The plastic finish is about as basic as possible, while the cushioning is ample at best. It’s not uncomfortable, but the mesh padding around the headband and the ears is reminiscent of what you’d find on a much cheaper headset, and from the premium leather and leatherette finishes on more premium headphones.

Another issue is that the headband is way too big for most heads. We just couldn’t get it to tighten up enough to be comfortable on our head. 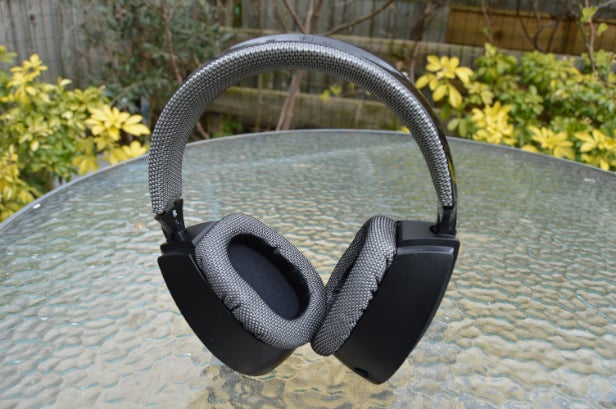 Given Klipsch’s audio heritage making reference-quality loudspeakers, you’d expect the KG-300’s to offer great audio quality, which is why the merely adequate performance is something of a disappointment. It’s not that these 40mm drivers sound bad – far from it – it’s just that they fall short in comparison to other headsets at this price.

The bass from the KG-300 is relatively deep and defined, which makes it a good choice for action games, but it’s not quite as punchy as it should be. Treble performance is better, allowing you to hear all of the voices of any movies you watch, but again, it’s nothing to write home about. And while the headphones go up to the limits of comfortable volume levels, they don’t quite go as loud as you want for those nights you really want to crank up your music.

If you’re using the transmitter’s optical connection, you have the option of taking a Dolby Digital signal and transforming it into a faux-surround mix using Klipsch’s Surround technology. Like most headphone surround technologies, it’s something of a fudge, and doesn’t really offer a discernable advantage in games. However, if you watch a lot of movies, it’s a feature you might end up using, and the Surround performance is as good as anything we’ve experienced from Turtle Beach and Creative. 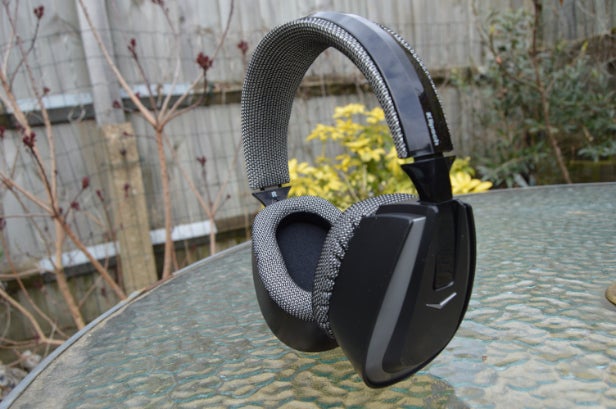 Klipsch has also included four gaming audio presets that you can cycle through using a button on the headset: Fidelity, Combat, Stealth and Sport. These adjust the EQ of the headset for these particular genres; you can’t tweak the settings yourself, but they performed as we expected, emphasising bass in Combat, and treble in Stealth.

Wireless performance is good but not exceptional, and not up there with what how far we’ve been able to travel with Turtle Beach’s wireless headsets. The headphones hold onto the signal up to about 10m away, but once you lose line of sight or go onto another floor, they cut out immediately. We had better luck across floors once we moved the transmitter closer to a window, but you probably shouldn’t expect to use these throughout your entire house.

The KG-300s work with a mobile phone, tablet, laptop, portable games console, or anything else with a 3.5mm audio connection. It’s just a shame that there’s no Bluetooth wireless capability so you can connect other devices to them wirelessly. 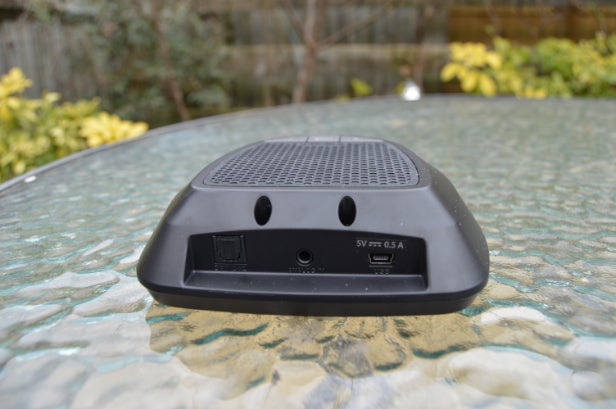 If you want to voice chat, you need to connect different cables depending on the system you’re using. The package comes with cables for PlayStation and Xbox, although you’ll need an adaptor if you’re on an Xbox One, while on a PC or Mac you need to make sure you’re connected to the host machine using a USB cable. Klipsch has done a great job at neatly organising and colour-coding the cables in the box to make setup as simple as possible.

The microphone is a separate component that slots into a hole on the side of the headset, and its rigid positionable arm can be moved closer or away from your mouth, which we liked. The KG-300 boasts good microphone performance–you can adjust voice chat levels manually using the buttons on the headset. You can also turn on a feature called Self Voice Monitoring, which isn’t really explained in the manual, but it basically means you hear your own voice through the headset, which can make voice chat feel a bit more natural.

The lack of Xbox One compatibility is to be expected with most gaming headsets as Microsoft’s console requires a separate adaptor. So imagine our excitement when we saw on the Klipsch KG-300 that it was “Compatible with Xbox One”. However, we were quickly disappointed when we read in the manual that the separate adaptor was still required. Klipsch says the KG-300 is compatible with the Xbox One on the box, but it doesn’t say that a separate adaptor is required, so if you’re an Xbox One owner, don’t fall for Klipsch’s egregious wording.

Should I buy the Klipsch KG-300 Wireless?

The Klipsch KG-300 is a good headset let down by a few strange design choices. On the one hand, it has all of the features you’d expect from a wireless headset at this price, including compatibility with a wide range of devices, surround sound processing, and different gaming presets. But it also has its own little quirks, like a massive transmitter unit, non-rechargeable batteries, and a budget construction that belies its mid-range price point.

It’s therefore difficult to recommend the KG-300 headset to anyone other than those who would prefer to use standard batteries over a built-in rechargeable one. The audio quality isn’t as good as it is on competing models from Turtle Beach and Kingston, while the comfort and overall feel of the headphones falls short of those competing models. The wireless range is also average at best, while the headband doesn’t go tight enough to make it comfortable for people with a normal-sized head.

The KG-300 is a competitively-priced wireless headset that works with a variety of devices, but there are too many quirks and disappointments that let it down.