Don’t be fooled by its name. You might be thinking we’ve looked at a Klipsch iGroove SXT before and as that link indicates – yes we have. However, not all iGroove SXT’s are created equal. The name may not have changed in the passing months, but the internals have. Whether the update is for the better or not remains to be seen.

The predominant selling point of the refreshed iGroove SXT is that it is now iPhone compatible. In the old version, plugging in my iPhone resulted in the annoying suggestion that I enable flight mode, whereas now my handset is accommodated with nary a complaint. Annoyingly, because the external hardware is unchanged, the system still requires a menagerie of interchangeable dock inserts to be swapped out depending on which iWhatever is inserted.


Unsurprisingly our opinions of the iGroove SXT’s styling remain unchanged. I guess if you have a thing for functionally designed products it might appeal, but otherwise there’s nothing to write home about. The buttons could really have done with some work, because their response is, well, practically non-existent to be brutally honest. Changing the volume up or down is, as a result, more akin to voodoo than precision adjustment. The remote, thankfully, is a less disappointing affair.

It’s worth noting that even though the iGroove SXT now enables an iPhone to be docked, that doesn’t necessarily mean you’d want to. The way incoming calls are handled is perfectly fine, with the currently playing song’s volume dropping down to be replaced with your ringtone of choice. However, depending on who is calling you and what they have to say, having that conversation broadcast to all and sundry within earshot might not be desirable.


The shielding against phone signals proves more useful when others have their mobiles nearby while music is being played. I’ve lost count of the number of times a phone call has interrupted my testing of some speaker system or another – or even just casual listening. If I get my way all speaker systems will come shielded soon enough.


Potentially useful is a 1,000mA “rapid charge circuit” as Klipsch calls it which can provide a rapid boost to your iPhone or iPod’s battery. If you’re in a hurry to get out and have neglected to give your device its usually requisite overnight charge this could prove pretty useful.

These changes are all well and good, but there’s a potential sticking point in the price of the iGroove SXT. The iPhone-rejecting version could be had for around £90, but this system costs some £120. Alas for Klipsch, while the MSRP hasn’t changed since the first SXT launched, this model isn’t getting discounted by retailers as much as its predecessor.


Fortunately, Klipsch also tweaked the components within the SXT’s shell – hopefully for the better. The work certainly seems to have had the desired effect. Sure, there’s better sound quality to be had from more expensive systems but that’s precisely why those systems cost more. Unfortunately, high quality generally comes with a high price tag; even if the reverse isn’t strictly true. You’d have to be the most humbug-ridden of Scrooges to complain about the iGroove SXT’s output. 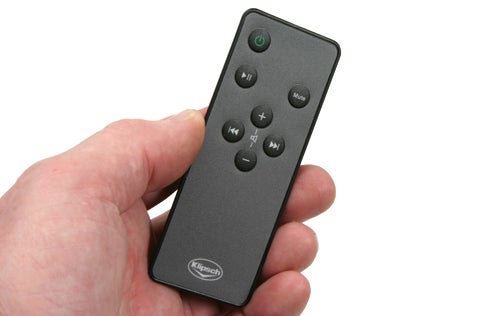 For a start there’s enough power to fill a decent-sized room comfortably; even with such demanding fodder as the Foo Fighter’s ‘One by One.’ Dave Grohl is, after all, hardly the most restrained of singers but the iGroove only started to struggle with his voice with the volume pushed right up. The rest of the time there was plenty of warmth and detail to be had and surprisingly defined stereo separation for such a small system.


The reproduction isn’t by any means perfect. Both cymbals and guitars have a tendency to end up muddied when there’s a lot going on and while the low end isn’t entirely lacking, it would ideally be fuller still. Switching genres just a little and giving JoJo’s excellent Leave (Get Out) a listen did little to change my mind. Again, there’s nothing to complain about per se; just a general sense that the rendition lacks that “je ne sais quoi” that sets the best speaker systems apart from the rest. 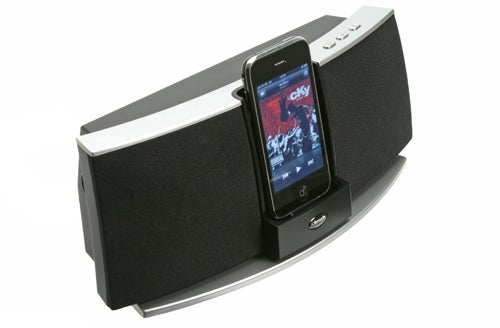 Like the iGroove SXT’s appearance, its sonic abilities are neither disappointing, nor outstanding. Its appeal or lack thereof is therefore more likely to come from the SXT’s use and placement rather than its outright performance. So if you’re in the market for a set of desktop speakers then the Sony SRS-GD50iP might be a better fit – combining as it does an iPod dock and a USB speaker system. If, however, you’re solely after a speaker dock to sit on a bedside table, it’s “advantage, iGroove SXT”, thanks to its compact dimensions. Furthermore, you’re money would be much better spent here than on the Altec Lansing inMotion Max system we looked at recently, certainly.


The Klipsch iGroove SXT was fairly well received the first time around and there’s no denying that its updated self is an improvement. Alas, the increased price can’t be ignored, and might prove too much for some.