Last month I looked at the Klipsch Image earphones, which proved to be the most comfortable in-ear devices I’ve ever had the pleasure of using. They didn’t offer the last word in sound quality, but that was hardly surprising considering just how tiny the single armature drivers had to be in order to make the Images so light. However, I did feel that the extreme comfort and light weight made the Images a better choice than, say, a pair of Shure E500PTHs in certain situations. And that’s what Klipsch was shooting for all along with the Images.


Now I have a pair of Klipsch Custom-3 earphones, which differ entirely from the Images, with a far more traditional design. Another major difference is that the Custom-3s employ dual drivers, much like Shure’s SE420s, which should mean that the Custom-3s produce superior sound quality to their waif like siblings. 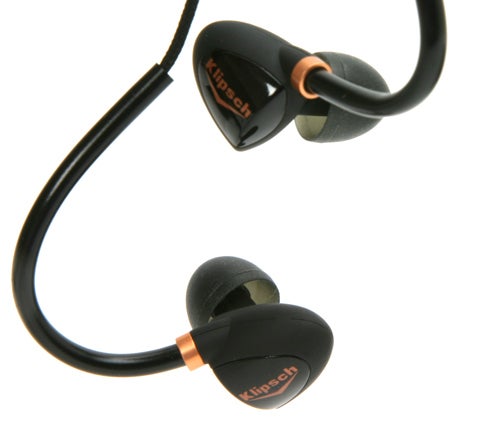 The problem with multi-driver earphones is that you need a great crossover system to keep the sound cohesive. There’s nothing worse than having the high and low frequencies sounding completely separated, which is often the case with 2.1-channel desktop speakers. Klipsch claims that it has created an entirely new electro-acoustic crossover, which creates a full and cohesive sound, and I’ve got to say that the results are very good.


The Custom-3s give you full, deep and strong bass response, but not at the expense of high-end clarity. Whereas the bass can sometimes feel forced, or sound slightly muffled in the Images, there’s no such complaints with the Custom-3s. What you have here is a set of earphones that’s more concerned with sound quality than comfort, light weight and unobtrusive appearance. Don’t get me wrong, I love the Images and I use them regularly, but in pure sound quality terms, they struggle to compare to a set of Shure SE420s. The Custom-3s are clearly here to redress that balance, giving potential buyers who don’t want to compromise on sound quality another Klipsch option.


The Klipsch Custom-3s gave a particularly good account of themselves when faced with the Dave Brubeck classic Take Five. Brubeck’s subtle, underlying piano is never lost or overpowered by Paul Desmond’s haunting saxophone. In fact the Custom-3s create an impressively cohesive sound, despite the fact that each and every instrument demands your attention. Joe Morello’s drum solo meanwhile is rendered superbly by the Custom-3s, and despite its power and intricacy, Brubeck’s piano continues to make its presence heard, and felt.

Next I cued up The Verve’s landmark album, Urban Hymns, turning to the ever powerful and moving Bittersweet Symphony. Once again the Custom-3s showed that they have a significant depth of talent, reproducing the powerful strings of the intro with crystal clear clarity. And even as the rest of the instruments and vocals arrive in the mix, those strings are never lost, always discernible just behind the vocals and strong beats. If you haven’t listened to this song in a while, get yourself a pair of Custom-3s and fire it up – you’ll remember just how good it is!


I turned next to an enduring memory from my childhood, namely George Benson’s 1978 live album, Weekend in L.A. The live rendition of On Broadway is a masterpiece and one of the most memorable recordings in Benson’s career. Again the Custom-3s gave an excellent account of themselves, reproducing that strong bass line, Benson’s powerful, melodic vocals and, of course, his expert guitar riffs. The Custom-3s produced a truly immersive sound, making me feel as if I was in the crowd, listening to the music first hand. 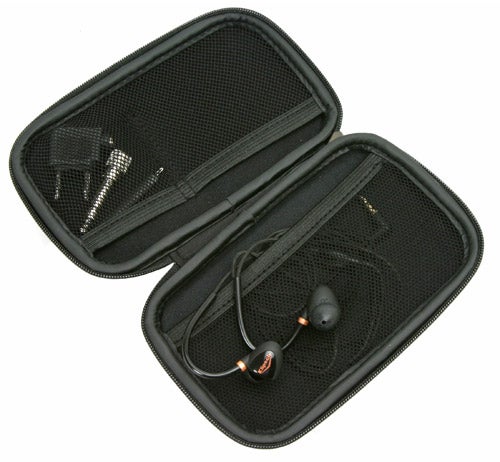 I listened to the same music using a pair of Shure SE420s, and was surprised by how different the sound was. It’s hard to say which pair is better though, since although the Shures offer slightly improved clarity at the high-end, the Klipsch Custom-3s produce a fuller and warmer sound. If you have a chance it’s worth listening to both, since the difference is likely to be a matter of personal preference.


The design of the Custom-3s is very reminiscent of the Shures too – they sit inside your ear, while the cable is routed over your ear and down the back. However, Klipsch has employed a mouldable cable cover that protrudes from the earphone, thus allowing you to route the cable over your ear without it slipping – Ultimate Ears uses a similar design, and it definitely helps keep your cables where you want them.


The Custom-3s aren’t as comfortable in the ear as the Images, but that’s not surprising, since the Images are unfathomably light. That said, they are still very light and comfy in the ear even after an extended period. I also initially found it difficult to get a good seal using the Custom-3s, but after a bit of experimentation with the silicone tips I found that I was able to get a very good seal without much effort at all. Another point worth mentioning is that the Shure foam tips also fit on the Custom-3s, and if you prefer the very snug fit offered by foam, you can just buy few sets from Shure.

The Custom-3s also employ braided cables, which makes it very light, flexible and almost tangle free. The cable also transmits very little in the way of noise, even if it happens to be slapping around as you walk or run. The plug at the end is right angled like on the Images, but it’s not a smooth curve this time and doesn’t look quite as stylish. The plug is iPhone compatible though, so you won’t need to take a knife to it in order to squeeze it into Apple’s annoyingly narrow headphone socket.

As with the Images, you get a decent bundle with the Custom-3s. There’s a large carry case that’s big enough to hold your MP3 player, as well as the earphones. You also get an aeroplane adapter, a 1/4in headphone adapter and five different sets of silicone tips. You also get a voucher to send off for two more sets of ear tips free – yes this voucher is valid in the UK as well as the US. Finally, you get a square carry case for the earphones alone, complete with a magnetic flap to stop your Custom-3s falling out.


Looking around the web, the Custom-3s can be had for as little as £149, which is impressive considering that it’s taken over a year for the Shure SE420s to drop to that level. So it’s fair to say that Klipsch is being very aggressive with its pricing, which can only be seen as a good thing for the consumer. 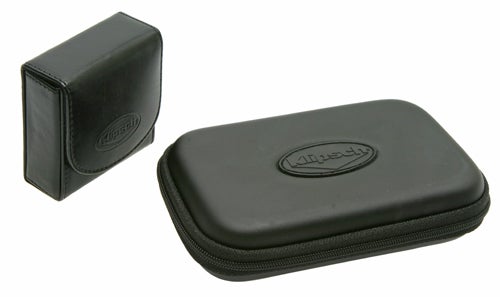 Of course what you really want to know is whether I’d recommend the Custom-3s over the well established Shure SE420s, but that’s a very tough call to make. Every time I listen to the SE420s I remember why I thought so highly of them when I reviewed them a year ago, but Klipsch has definitely produced a superb set of dual driver earphones at a very attractive price. Unfortunately I think I’m going to have to sit on the fence with this one, because both the Shures and the Custom-3s sound superb, but in slightly different ways. They both do a sterling job of creating a truly cohesive sound, despite sporting separate high and low frequency drivers, and the engineers that developed the crossover systems at both camps deserve a pat on the back.

As I mentioned earlier though, the Shures do lean more towards clarity at the top end, while the Custom-3s give you a bit more bass response. That’s not to say that the SE420s really lack bass, or that the Custom-3s lack high end clarity, and if you listened to each in isolation, you’d no doubt be happy with the breadth of either sound stage. If you absolutely forced me to make a personal choice, I’d probably go for the SE420s, since my preference tends to lean towards absolute clarity, without losing too much of the low end – which is probably why I favour the triple driver Shure E500PTHs as my personal choice of earphone.

However, I have a sneaking feeling that much of the buying public will prefer the slightly fuller, ever so slightly bass heavy sound of the Custom-3s, and I have a suspicion that Klipsch believes the same thing. Couple that with the lightweight, extremely comfortable design that Klipsch has created, and you’ve got a pretty compelling package. I think Klipsch has developed a range of earphones that will suit a broad spectrum of listeners, looking for a serious upgrade to the bundled rubbish that came with their player. And even though I may (just slightly) prefer the sound of the Shure SE420s, I think that I’d probably find myself in the minority.


Despite being larger and heavier than the Images, the Custom-3s are still very light and comfortable in your ear. More importantly though, the dual-driver design makes for a broader sound, with more impact at the low end than the Images could manage.


The Custom-3s are going head to head with Shure’s SE420s in terms of both price and specification, and the sound produced from both sets is mighty impressive. If you favour high end clarity in your music, you’re probably better off going for the Shures. But if you’re looking for a rich, full and powerful sound, across a broad range of musical styles, the Klipsch Custom-3s will suit you down to the ground.