What are the KitSound Harlem?

Sitting at the cheapest end of the affordable wireless headphone market, the KitSound Harlem aim to provide solid sound quality and wireless capabilities at what is, frankly, a startlingly low price point.

This £35 set is supposedly of the over-ear variety, but the ear cups are slightly too small for it to really perform like a good pair of over-ear headphones. These are more akin to the on-ear style.

With a decent design, a huge battery life, and a good range of features at a super-affordable price, these still offer incredible value for money, though.

As mentioned, these are billed as over-ear headphones, but they really do fit more like an on-ear pair. As a result, they aren’t particularly comfortable. The padded ear cups are soft enough, but once I put the set on my head, the pads sat on much of my outer ear, which became progressively hotter the longer I wore them.

If you wear glasses, too, the Harlem will get pretty uncomfortable pretty quickly. My ears became hot after only five minutes, and after 45 minutes I had to take the Harlem off. Note that this problem isn’t confined to the Harlem; many on-ear sets suffer the same comfort issues.

Fortunately, things are more positive when it comes to the overall design. If you were expecting something pretty shoddy from a £35 pair of headphones, you’ll be pleasantly surprised. KitSound has done an excellent job of making the Harlem look like a premium set, even if on closer inspection the pair betray their budget positioning. 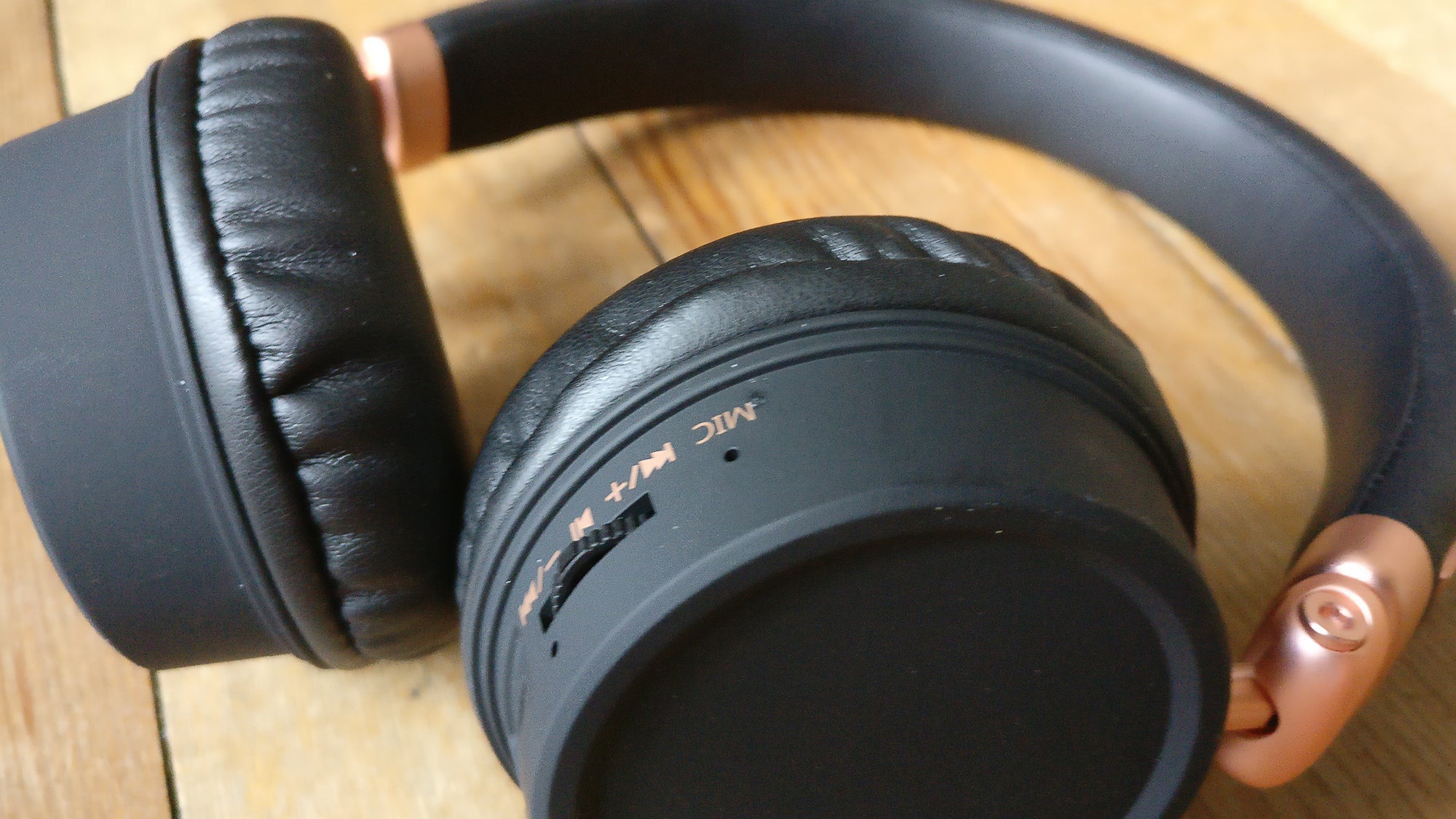 The headphones are available in a range of colours: Black, Blue, Dark Pink, Purple, or the finish I was sent in for review, Rose Gold-Black. Padding on the headband and ear cups is decent enough. It’s obviously just covered foam, but it does the job and looks good.

The back of the ear cups are made of plastic and, again, it looks good but feels a tad cheap. The extendable arms feel a bit more premium and are quite easy to adjust, making for an overall perfectly acceptable design. On recalling the price, however, the Harlem seem downright luxurious.

KitSound has added a sort of flickable click-wheel that protrudes from the bottom of the ear cup and is used to control the track skip and volume functions. When you press it, it doesn’t really click so much as sink disconcertingly into the body of the ear cup. It’s better than fumbling with touch controls, but I often found I’d hold the wheel to the left or right to adjust the volume, only to have it go too far in one direction. I’d then tap it in the same direction involuntarily, attempting to adjust the sound, only to have the track skip. You’ll get used to it the longer you use it of course, but it’s always nicer to have dedicated buttons for each command.

The control’s flimsy feel also doesn’t add much to the sleek design and solid, if not quite robust, feel of the Harlem. However, it’s a minor niggle overall, and I found the mic that sits alongside the control perfectly usable for Skyping.

On the other side of the wheel, along the bottom of the right ear cup, sits the micro-USB charging port, alongside a power button that’s also used for pairing. Hiding the controls under the cup in this manner further adds to the sleekness, helping the Harlem maintain an impressively streamlined look for a set at this price. For me, the standout feature here is the 30-hour battery life. That’s an incredibly long time for a set of wireless headphones to stay charged, and outdoes even top-end offerings such as the £300 Sony MDR-1000X with their 22-hour battery life. Even the stellar Bose QuietComfort 35 only manage 22 hours, making the Harlem’s claimed on-time one of the best around.

I can’t say whether these headphones actually go for 30 hours, as over the course of my time with the set I couldn’t say precisely how long I’ve actually listened. But it’s certainly close to the 30-hour limit, and the Harlem are still going strong.

Alongside that beastly battery life, there are plenty of other helpful features that you might not expect for £35. There’s call-handling, allowing you to use the aforementioned mic and on-ear controls to make and take calls. Elsewhere, there’s no standard headphone jack included, but the Harlem do come with a 3.5mm-to-micro-USB audio cable that allows you to use them as a wired pair.

The Bluetooth range is 10m, which is fine for when you’re out and about using your phone as the music device. When pairing, however, I found on one instance that my phone simply wouldn’t find the Harlem. It didn’t matter how many times I tried restarting the pairing process or turned off the Bluetooth or headphones, the set just wouldn’t pop up on my phone’s list of Bluetooth devices. Once I moved, it seemed to fix things. 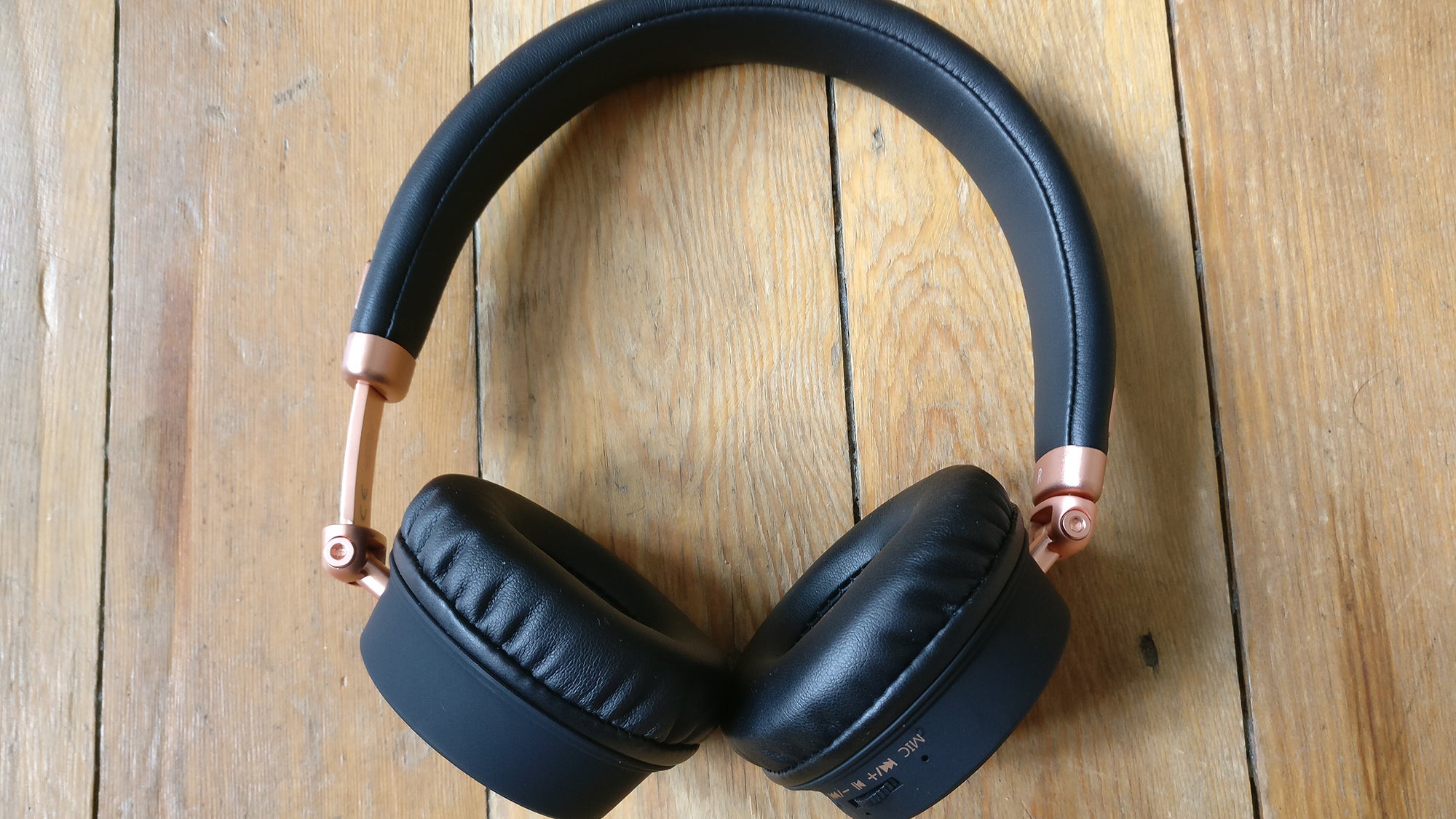 My first impression was that the bass was so boosted that it was overpowering. And, at times, the low end certainly does come across as bloated, initially making it difficult to determine whether the treble and mids are actually lacking, or if they’re just being drowned out by the bass frequencies.

But after using the headphones for a while, and trying them with some different genres of music, I was pleasantly surprised to find that the sound was more detailed than I’d originally thought. If you’re listening to something that already has prominent bass, then the Harlem’s enhanced bottom end makes everything sound dull and bloated. But with most genres, it handles things impressively for such a cheap set.

I was impressed by how specific sounds were isolated, making for a nuanced sound signature that offers far more detail than you’d expect at this price point. Specific instruments can be made out easily, even among the heavy low end. Listening to a hip-hop track, I was surprised by how clearly I could make out the sample over the almost oppressive bass. Even though the throbbing of the low frequencies initially seemed overwhelming, I could hear the vocal sample floating freely between the left and right channel in good detail.

It’s not top-notch sound, by any means. Songs certainly sound a little subdued and lacking in vibrancy at times, as a result of the enhanced bass. But you could do so much worse for a sub-£50 pair of wireless headphones with this many features. 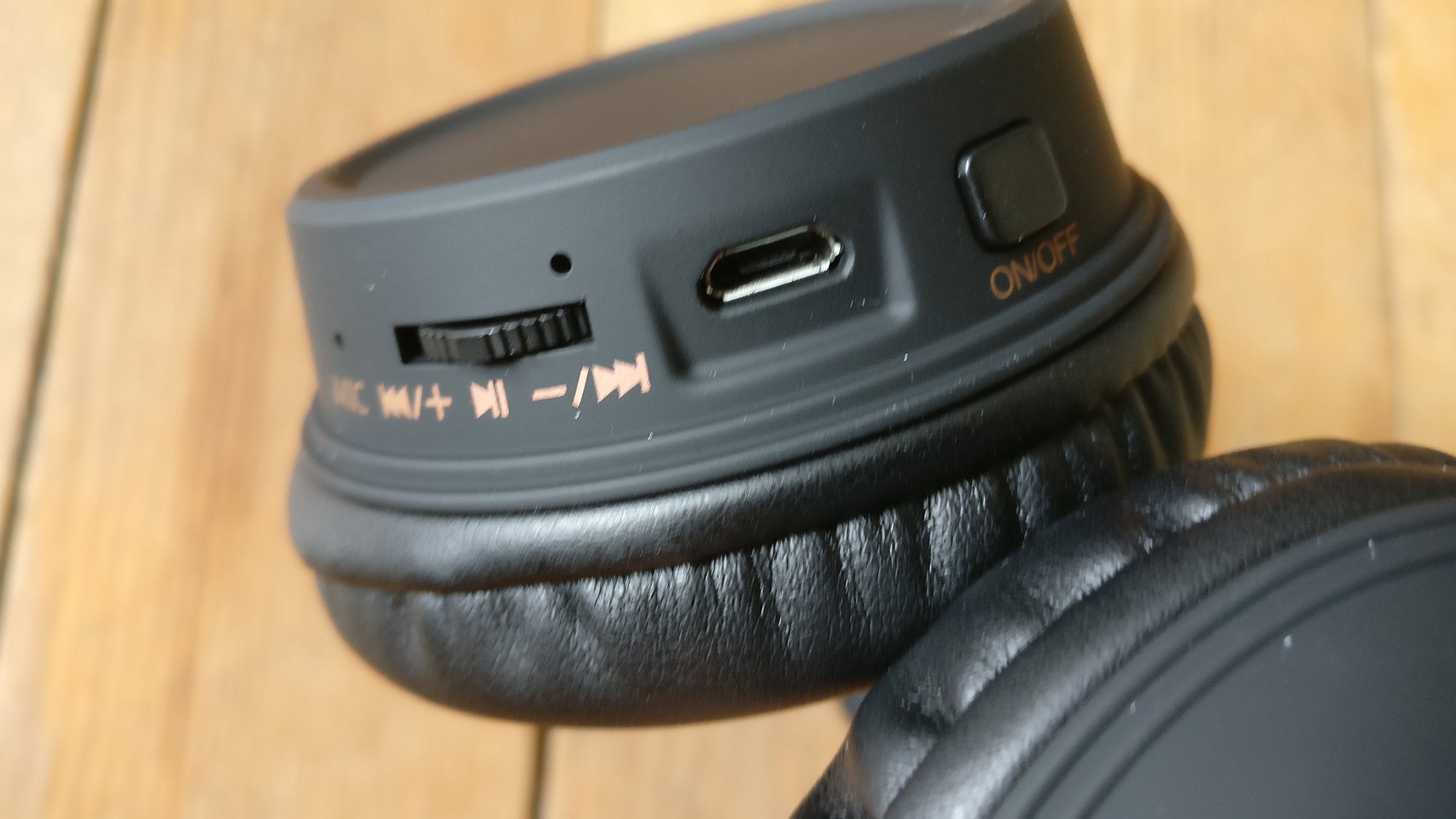 At times, I also noticed the sound was slightly glitchy, as if the Bluetooth had dropped for a millisecond, causing the most minuscule of pauses. It was clear that this was the result of a weak Bluetooth signal, which is worse when you’re moving around. In my case, I was listening on the train. It isn’t a constant problem, however, and didn’t make the music unlistenable.

Passive noise cancellation isn’t too bad, either. No doubt some of that is down to the sheer fatness of the low end, which manages to drown out a lot of the outside noise. But the set generally does a decent job of isolating you from the surrounding environment anyway.

Should I buy the KitSound Harlem?

After two weeks with the Harlem, I have to say the set is a genuinely impressive offering from KitSound. As budget headphones go, you probably won’t get much cheaper than £35 for a wireless pair. Frankly, any less would be worrying. But KitSound has managed to pack in some great features and an incredible battery life alongside thoroughly impressive sound performance for a budget set.

Those looking for a bit more in the way of features might want to check out the company’s Immerse Active set, which bring active noise cancelling to the party – although in an in-ear design. As it stands, the Harlem’s circular ear cups make for quite an uncomfortable pair that’s more akin to on-ear than over-ear. 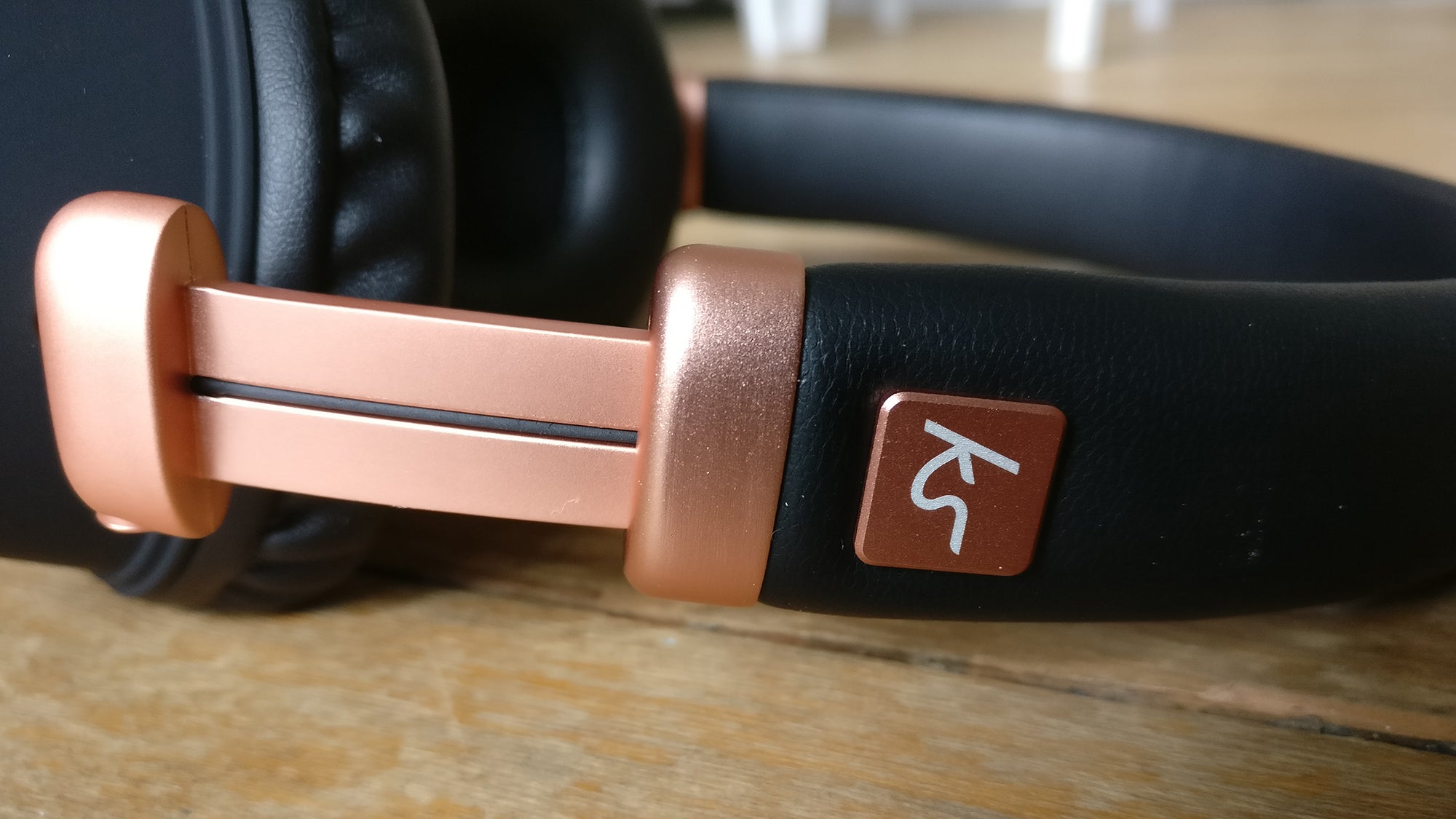 It goes without saying that, despite the standout features, the Harlem remain an affordable pair of wireless headphones. As such, the sound – although great for the price – is lacking in many ways. Bass response has been boosted, and often the overall audio quality suffers for it. Again, it’s fine for the price, but those looking for a premium sound experience should look elsewhere.

One thing I can’t comment on here is longevity. Usually, if a set this cheap seems too good to be true, it is. You’ll usually find there’s a catch somewhere, and while I have to be clear in saying that during my two weeks with the KitSound Harlem I didn’t discover one, I have no way of knowing how long these budget cans will last.

Offering impressive sound quality for a £35 set of headphones, the Harlem are some of the best budget cans available.