What is the KitSound Diggit?

The KitSound Diggit is an ultraportable Bluetooth speaker that bucks the trend of KitSound’s usual any-colour-as-long-as-it’s-black policy. Instead of a stealthy plastic shell, this 10W speaker is designed to be seen as well as heard.

But the thing that really makes it stand out from the crowd is the inclusion of a removable plastic stake, which allows you to jam it into earth, mud, sand, ice cream, or, well, anything soft enough to support it really.

At just £40 and a touch smaller than a standard glass bottle of ketchup, it isn’t likely to have the neighbours complaining about the noise – but does it sound good enough to get that garden party started? Let’s find out. 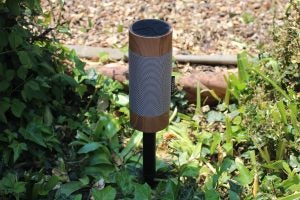 With its combination of faux wood and a tightly woven fabric mesh, the Diggit looks less like something you’d pick up in Dixons and more like something you’d see for sale near the checkout of a garden centre – next to the solar-powered lanterns and motion-activated talking gnomes.

The Diggit’s affiliation with the outdoors doesn’t end there. It comes with a plastic stake, which, when attached to the finger-sized hole in the bottom, allows you to stick the speaker into the ground. This enables you to lift it above terra firma, supposedly stopping the sound from getting absorbed straight into the earth.

It’s a neat idea, but there’s nowhere on the speaker itself to stash the stake when you’re not using it, which makes it feel eminently losable. The best you can do is split it into two halves and store one inside the other. 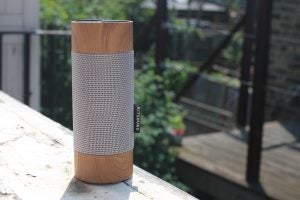 The speaker has four rubberised buttons on top: power, volume up/down, and one for answering calls hands-free. There’s no play/pause as such, but hitting the ‘phone’ button when there’s no call coming in will have the same effect. You skip tracks by holding down the volume up or down buttons for two seconds.

A light-up ring surrounds the buttons to indicate when the speaker is turned on and to help with pairing. It flashes when there isn’t anything playing, which seems annoying at first but is actually a handy hint to turn off the Diggit when you’re not using it, thus saving precious battery life. 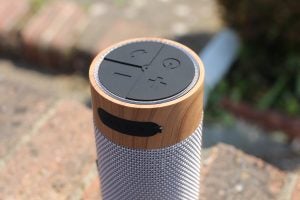 In order to maintain the Diggit’s waterproofing, its aux and micro-USB ports are covered by a thick rubber flap. Its rated at IP55, which means it’s more suited to withstanding spillages and the onset of British drizzle than anything more extreme. You can’t, for example, chuck it in the pond for a fish disco, or leave it stuck in the flowerbed overnight if there’s rain due.

In other words, if the Diggit was a festival then it would be Latitude rather than Download. 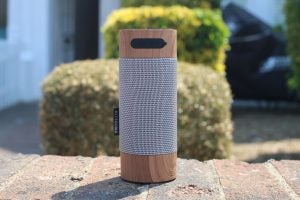 That comparison extends to the sound quality as well – the Diggit is most at home playing music that doesn’t challenge its modest drivers too much.

Try to blast metal or hip-hop at full volume and you’ll expose its limitations at either end of the scale, but the Diggit actually copes with the mid-range fairly admirably. Voices sound clear, albeit a little lacking in richness and warmth. Play Radiohead’s Nude and its simple, spacious arrangement is given room to breathe, with Thom Yorke’s vocals pushed right to the front. 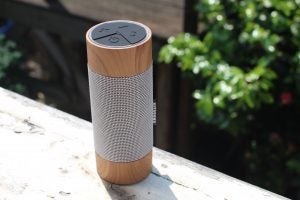 As you might expect, though, bass doesn’t have the power to really kick and it can be overwhelmed a little on busier tracks. The Diggit lacks overall presence, but considering its size that’s hardly surprising.

Buy a couple of Diggits and you can connect them wirelessly to make a stereo pair. Unlike many Bluetooth speakers that offer this functionality, you don’t need to download an app in order to do it – just a bit of pairing trickery.

The results aren’t bad, but you’re probably better off spending a little more and getting a single speaker with more capable drivers, such as Philips’ EverPlay BT7900 – or, if you’re willing to sacrifice the waterproofing, Jam’s Heavy Metal. 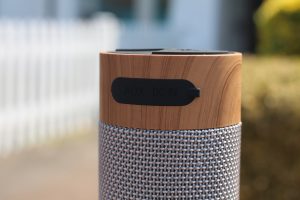 With its cylindrical form factor, KitSound claims the Diggit offers 360-degree sound. While you can certainly hear it from all sides, there’s a slight change in the sound depending on where you stand, although it isn’t dramatic.

With the stake attached and the Diggit anchored in the ground, the biggest difference is that the speaker is slightly closer to ear level, which does make it sound better than if it’s right down by your feet. The difference isn’t drastic – but every little helps. 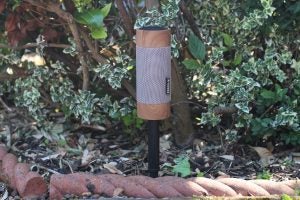 KitSound quotes an 8-hour battery life for the Diggit, which isn’t the best for a speaker of this size, but it’s certainly good enough to provide the soundtrack to a weekend in a field under canvas.

In practice, with the volume usually set at around the halfway mark, I got a couple of days of fairly regular use out of it before it needed a top-up. Considering the Diggit is unlikely to be your daily source of music, that’s plenty good enough. You’ll know when it’s getting low because the light ring will flash a pinky red, the volume gets lower and the sound intermittently drops out to remind you to plug it in.

It takes about three hours to recharge and, while there’s a USB charging cable supplied in the box, if you want to juice it up from the mains then you’ll have to provide your own plug adapter. Still, you’ve probably got about half a dozen kicking about anyway, right? 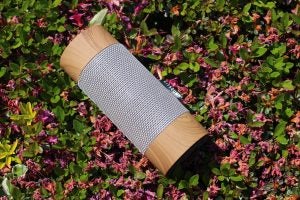 Why buy the KitSound Diggit?

At £40, Bluetooth speakers don’t come much cheaper than KitSound’s Diggit. Those that do tend to be no better than the speaker built into your phone and have all the design flair of a dustbin.

But with its faux wood finish, waterproofing and picnic-friendly spike attachment, the Diggit is instantly more appealing than many of its rivals. It doesn’t have the power or weight of a speaker such as the UE Wonderboom, and it isn’t as hard-wearing either – however, one of those brightly coloured blobs will set you back at least £20 more.

Limit your expectations of its performance and the Diggit will meet them. And without spending at least half as much again, you’ll struggle to exceed them.

Not the strongest soloist but the Diggit’s low price and extra features make it an appealing outdoor proposition.