A battery-powered Bluetooth speaker that claims to be the modern equivalent of an ‘80s boombox, KitSound has lofty expectations of the KitSound BoomBar 2+.

Despite a straight-laced Bose-esque appearance, it offers a decent level of waterproofing and a sturdy build. But at £70 there’s plenty of competition, so can its sound quality outperform its price tag? 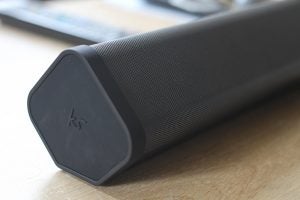 If Darth Vader worked in the marketing department at Toblerone, then we’ve no doubt that the the triangular chocolate bar’s packaging would look a lot like a BoomBar 2+.

The cross-section of this speaker (which comes in black and gold, as well as the gun-metal of this review sample) is actually an irregular polygon, with the shortest side at the base. At a glance it could easily pass for a product costing more than the £70 asking price, although the design itself feels quite derivative. It would hardly stand out in a lineup.

The bottom-third of the unit is matte plastic, and even though the majority of the KitSound BoomBar 2+ is covered in tiny holes, it’s IP66 dust- and water-resistant. This means that it can handle the odd splash of water, but won’t take too kindly to being totally submerged.

Thankfully, it isn’t the kind of unit you’d take down to the pool anyway. It’s probably more suited to resisting spillages than a week trekking through the jungle, and it doesn’t feel like it would take too kindly to being bashed about too much either.

Each end is capped with hard rubber: one home to the KitSound logo, while the other contains all the buttons and a tight-fitting flap that hides the USB charging port and a 3.5mm socket for an aux cable – which, thanks to Apple, is definitely starting to feel a bit old-school. 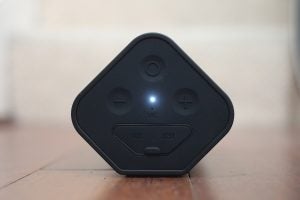 There are only three buttons: power, which also doubles as play/pause, and two volume buttons that can also be used to skip tracks. They’re easy to locate via touch alone and feel satisfying to press, unlike the buttons on some speakers at this price.

There’s also a tiny hole for the microphone and a single LED power light, with KitSound claiming a 10-hour battery life. During testing I found it was less, although not enough to dwell on. After all, these figures are usually based on fairly unrealistic usage conditions.

To ensure it lasts as long as possible, the KitSound BoomBar 2+ automatically shuts down after about 10 minutes of inactivity – but when it finally dies it does so a bit abruptly. The tiny LED will flash red when the battery is below 30%, but its position and size make it difficult to see unless you’re actively seeking it out.

You get very little in the way of accessories. A cheap-feeling USB cable for charging and a similarly budget 3.5mm cable is all that comes in the box with the BoomBar 2+. A case of some description would have been welcome, although at nearly 30cm long and with a fair weight for its size, the BoomBar 2+ is probably a little unwieldy for taking away anyway. 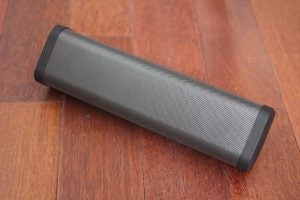 Despite the symmetrical shape, the KitSound BoomBar 2+ very much has a front. The drivers all face the same way and are angled slightly upwards, so it does a decent job of filling a smallish room. However, sound quality certainly suffers if you’re not standing on the correct side of it.

Push the volume to its limit and it doesn’t complain too much, although it does start to sound quite harsh the further it goes – those thoughts of it being a modern-day boombox are perhaps a little misplaced. If volume is high on your agenda, UE’s range of speakers offers more and is also much less directional.

That’s not to say the BoomBar 2+ doesn’t have its moments. Vocals are prominent and natural-sounding, and there’s detail to be heard, too. It’s just lacking in overall dynamism and excitement. 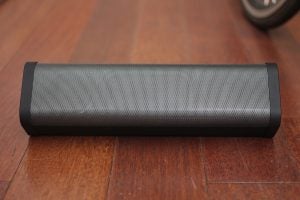 Play something simple and stripped back and the BoomBar 2+ will put in an acceptable, if not exactly thrilling, performance. But add much more to the mix and the BoomBar+ struggles to pick out individual instruments and the mid-range can become pretty muddled.

Ask of it something more challenging and the BoomBar 2+ struggles to come up with any convincing answers. Play Lift to Experience’s ‘The Texas-Jerusalem Crossroads’, which when heard at its best really soars, and it lacks the depth, solidity and authority you get from pricier, more capable speakers.

Bass is short on power and punch, so Brockhampton’s ‘Gummy’ lacks drive and the fuzzy blasts during Bon Iver’s ‘10 d E A T h b R E a s T ⚄ ⚄’ sound more like suppressed parps. It’s all just a bit hollow and one-dimensional.

Obviously, you can only expect so much from a 20W speaker that costs £70. However, the lack of definition, absence of authority from the bass, and fierce competition from elsewhere means the BoomBar 2+ just can’t measure up to the best. 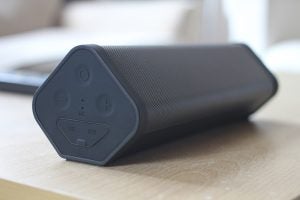 Making a Bluetooth speaker is all about meeting reasonable expectations for the price, so while nobody would expect too much for £70, the KitSound BoomBar 2+ doesn’t really deliver enough for that money.

With the UE Wonderboom now available for about the same cost, it’s impossible to recommend the former over the latter. The Wonderboom sounds much larger, despite being about a third of the size, and it’s way more portable. It’s even more resistant to water and dust.

The BoomBar 2+ is by no means a total disaster. It’s just that the competition offers much more.