What is the KitchenAid Nespresso Artisan?

A collaboration between an iconic appliance manufacturer and a leading coffee pod brand is exciting news for coffee fans who value both style and convenience. Taking design cues from the rest of the Artisan range, KitchenAid’s new coffee machine is outwardly everything that comparable pod machines aren’t – glossy, unashamedly attention-grabbing and made from die-cast zinc and aluminium for a robustness that gives the impression it’ll still be resident in your kitchen for decades to come.

Inside, it’s no less impressive, equipped with the Nespresso pod brewing system that dispenses coffee made from the range of 23 Grand Crus and compatible pods. Like many of KitchenAid’s Artisan range, the machine also comes in a range of six colours – Onyx Black, Candy Apple, Empire Red, Medallion Silver, Frosted Pearl and Almond Cream – so you can match it to existing appliances. 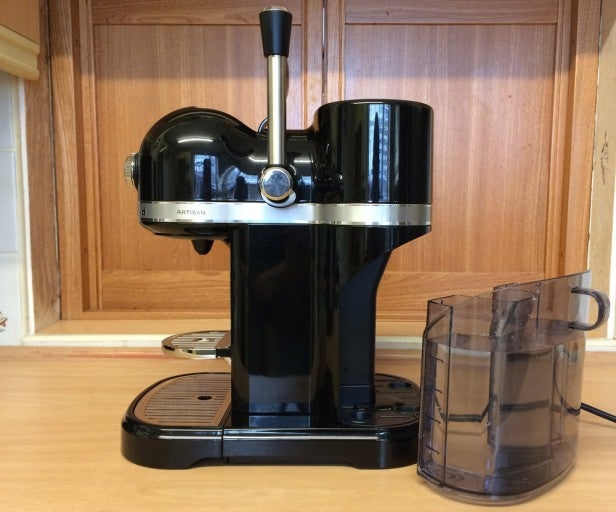 Simplicity is a key factor in the operation of the Artisan. Its controls have been pared back to one dial with a central button to turn the machine on and dispense coffee, and six drink sizes to scroll through via an LED indicator, starting from the petite 25ml ristretto and ranging up to a large 130ml lungo.

The dial also functions to display the length of standby time, a descaling programme and an emptying feature. All of which allows the more obvious design qualities of the machine, such as its stand-mixer-like shape and classic silver banding, to take centre stage. 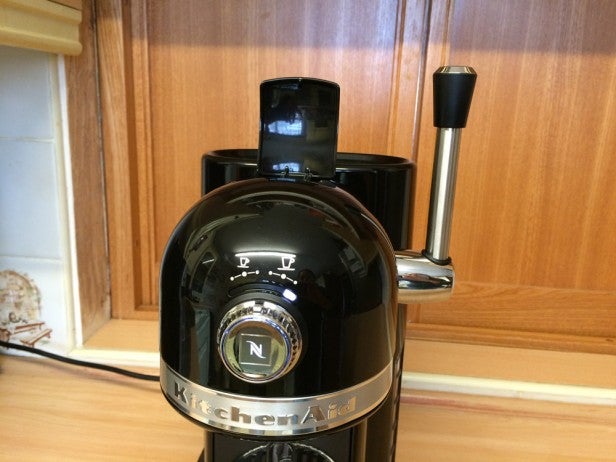 Continuing the emphasis on styling, one of its notable features is the handle that opens and closes the capsule door and disposes of used pods. While on other Nespresso machines the handle often takes the form of a minimal loop or flap, on the Artisan it’s far more obvious and reminiscent of a retro slot machine.

Given its ample size, it’s no surprise that the Artisan is built for volume brewing, with a generous 1.4-litre water tank at the back, equipped with a handle for easy removal, and a capsule disposal container that can accommodate up to 14 used pods. 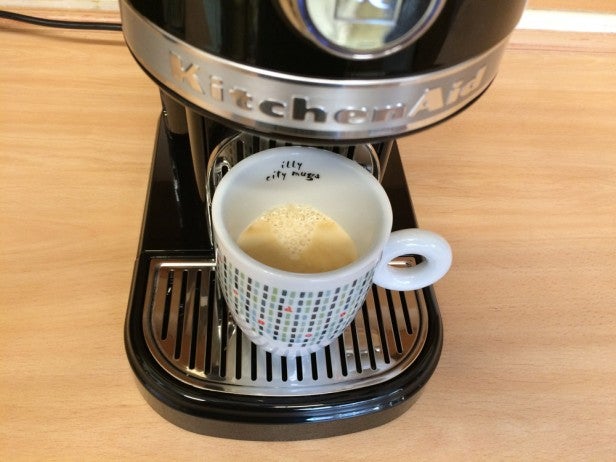 The Artisan isn’t the sort of machine that will happily live in a cupboard to be brought out at weekends. It’s heavy at 8.9kg compared to most similar appliances, so once you’ve found a space for it on your worktop, that’s probably where it’s going to live permanently. Its location will also be dictated by a short power cable (78cm long), but once it’s plugged in and switched on, operating it is effortless.

The thermoblock heats up in around 25 seconds and, using the dial, you can scroll through the six drinks settings – one side of the dial has an image of a small cup and one side a large cup. LEDs flash while it’s heating up and once they glow continuously, the machine is ready for use.

Capsules are dropped into the compartment at the top of the machine, then the handle rotates forward in one smooth movement, closing the cover with a subtle yet satisfying clunk. As the compartment is perfectly pod-shaped, the capsule drops in to sit at the right angle every time without error. Pressing the central button of the dial starts the brewing process, coffee dispensing from the spout into either an espresso cup, which has its own drop-down shelf, or a larger cup.

There’s no need to even select your preferred coffee size each time – the Artisan will automatically switch on at the setting that was selected most over the last 11 uses. Once the machine has finished dispensing coffee, the handle can be rotated back and the pod drops into the disposal container. 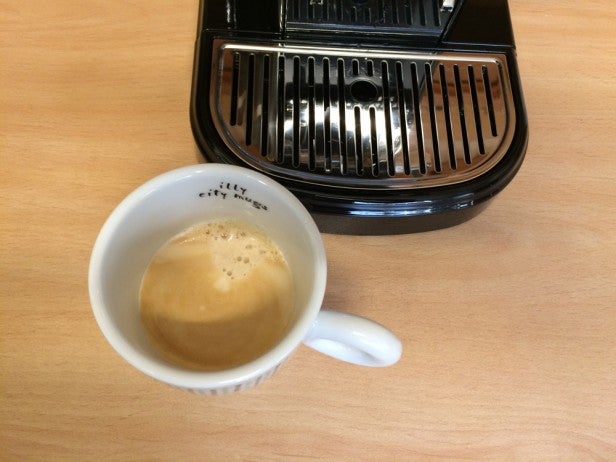 KitchenAid Nespresso Artisan – How good is the coffee?

Even if you’ve used a Nespresso machine before, you’ll be delighted at the quality of drinks the Artisan can brew and flexibility of volume. Whether it’s short or long, the coffee comes with a consistently thick, rich crema that has an irresistible aroma.

Nespresso’s pod system is of consistently high quality and offers a huge choice of flavours, but there are some compatible pods made by third parties that are worth trying out.

Should I buy the KitchenAid Nespresso Artisan?

Before you’re seduced by its good looks, it’s important to remember that the Artisan by itself only makes top-notch espresso or black coffee. Lovers of cappuccinos and lattes will have to have an alternative appliance on hand – such as the Aeroccino that can be bought with the Artisan as a package deal – for warm foamed milk, which means an all-in-one machine might be a better choice if they’re your preferred beverages.

The KitchenAid Nespresso is also quite pricey and takes up a fair amount of room in the kitchen when compared with the more compact alternatives. However, if conventional coffee machines have never appealed, yet having café-quality espresso on tap does, the Artisan is the one for you.

As a statement pod coffee machine, the KitchenAid Nespresso Artisan has no equal. It offers unmatched style, reassuring build quality and flawless operation, all wrapped up in a range of colour options.