As the name suggests, the KitchenAid Artisan High Performance Blender 5KSB6060 functions well. It can tackle hard fruit, ice and frozen ingredients, and does so quickly. It has an attractive appearance and its removable parts are dishwasher-safe. However, it doesn’t have any convenient pre-set programmes, which means the price isn’t entirely justified here.

The Artisan High Performance 5KSB6060 isn’t the most expensive or the most sophisticated model among KitchenAid’s high-end blenders (the Artisan Power Plus takes that crown), but it delivers smoothies, soups and frozen drinks with flair.

I tested the limited edition Queen of Hearts version, part of a range released to celebrate KitchenAid’s 100th anniversary in 2019, featuring a signature Passion Red frame and a metallic strip with miniature hearts. It’s a bright and shiny red that will add panache to any kitchen. Other colours available are the more subdued Matte Black and Matte White.

The square transparent plastic jug has millilitre and ounce measurements, in 125ml and 4oz increments. Helpfully, it features a small pouring lip on three sides. However, I felt the jug’s handle wasn’t very comfortable to grip because of its open design, which features exposed edges.

The rubberised lid is easy to remove and replace. It comes with a pleasantly sturdy plastic measuring cup featuring 30ml, 45ml and 60ml, and 1oz, 1.5oz and 2oz markings.

The motor unit is heavy, requiring some serious muscle to move it. However, this means you never have to worry about the blender moving around on your worktop in use. On top of the motor unit is a silicone frame in which the jug sits, allowing for easy placement and cleaning. 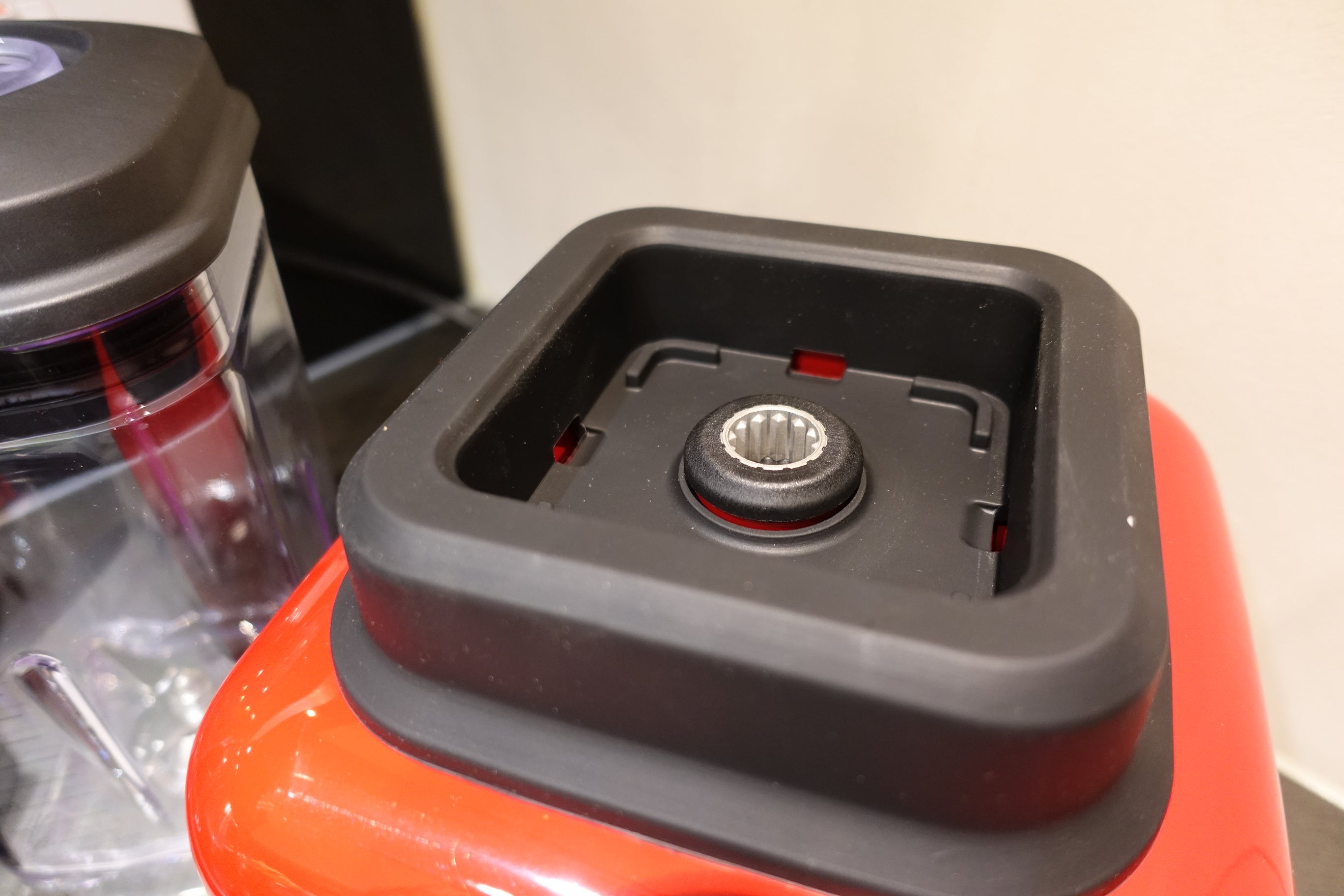 With a dial and two front toggles, the KitchenAid Artisan High Performance Blender 5KSB6060 is easy to use. But first you need to remember to use the kill switch at the back of the appliance next to the power cord to turn on the blender. While this isn’t entirely intuitive, it works as a safety measure, since it’s very easy to accidentally flick a front toggle or turn the speed dial.

Flip the start/stop toggle once in either direction, and a light will come on next to it; this indicates the blender is ready to use. Flip it again for standby mode and the light will blink slowly, eventually turning off.

The other toggle at the front is for pulsing, which needs to be flicked repeatedly to use the function. It would have been nice to have some sort of automation, even if it were just a basic pulse programme. The speed dial is simple to twist back and forth. The chunky controls are easy enough to use

I blended a variety of foods with this appliance and it was successful at demolishing everything at speed. As the manual here doesn’t make many suggestions as to the quantities, speeds and times besides general guidelines, I had to figure much out myself.

First, I blended a roughly chopped carrot, a quartered apple and orange, a date, some chia seeds and two handfuls of spinach with coconut water. After 25 seconds of gradually going up to speed 10, the mixture was smooth – but a little bitty. Blending for a further 20 seconds rid most bits. The few that remained weren’t apparent during drinking. 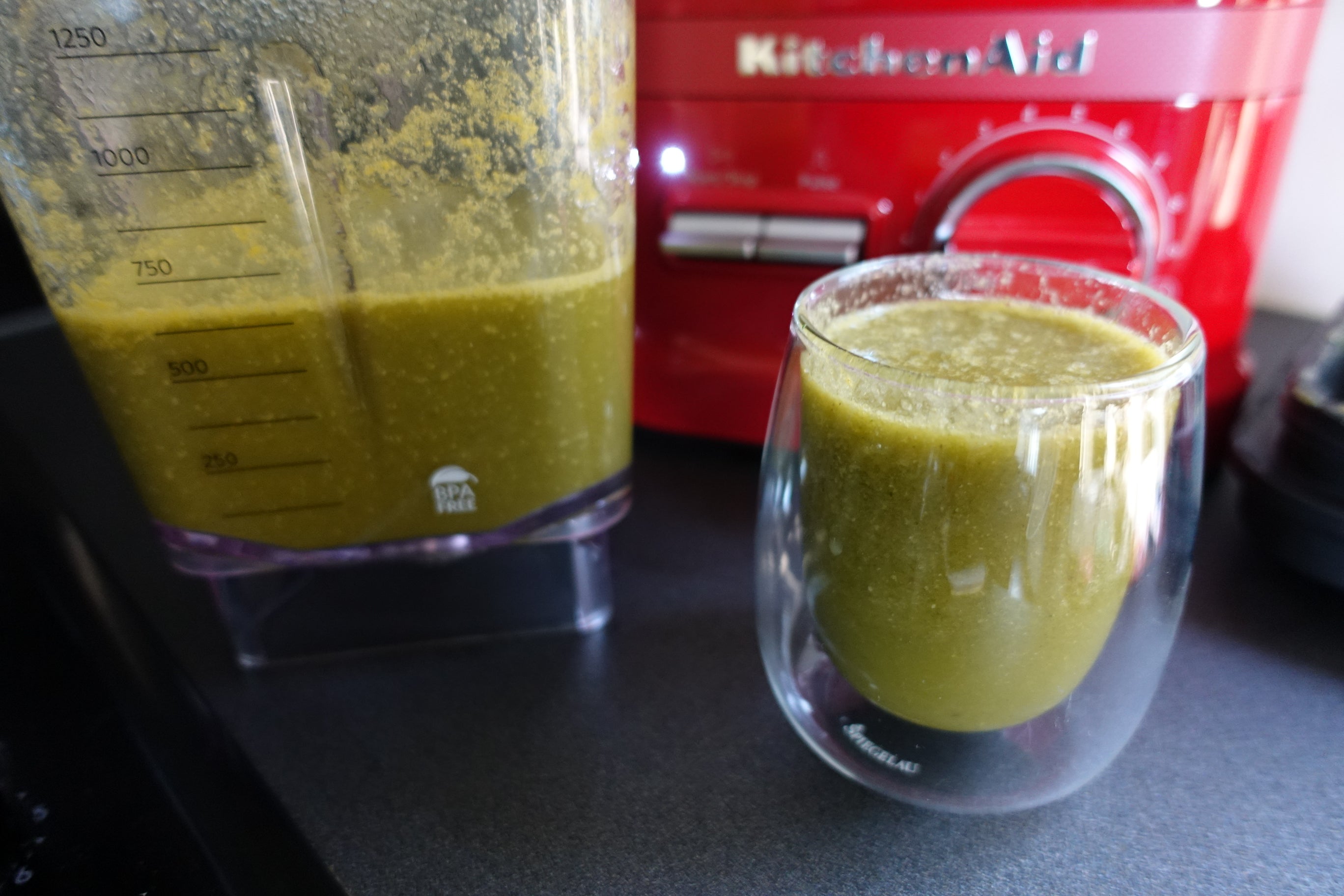 After blending on high speed we achieved a relatively smooth smoothie

The blender did get quite loud during the process, sounding like a drill. Luckily, the blending times are relatively short, so you won’t have to endure it for long. Just don’t expect stealthy smoothies.

I then went for a trickier smoothie, containing frozen banana and strawberries, ice cubes, cacao nibs, cashews, cacao, protein powders and avocado. I gradually increased the speed to 10 with a total mixing time of 40 seconds. The drink came out thick, but entirely smooth, with no remnants of nuts or cacao nibs. 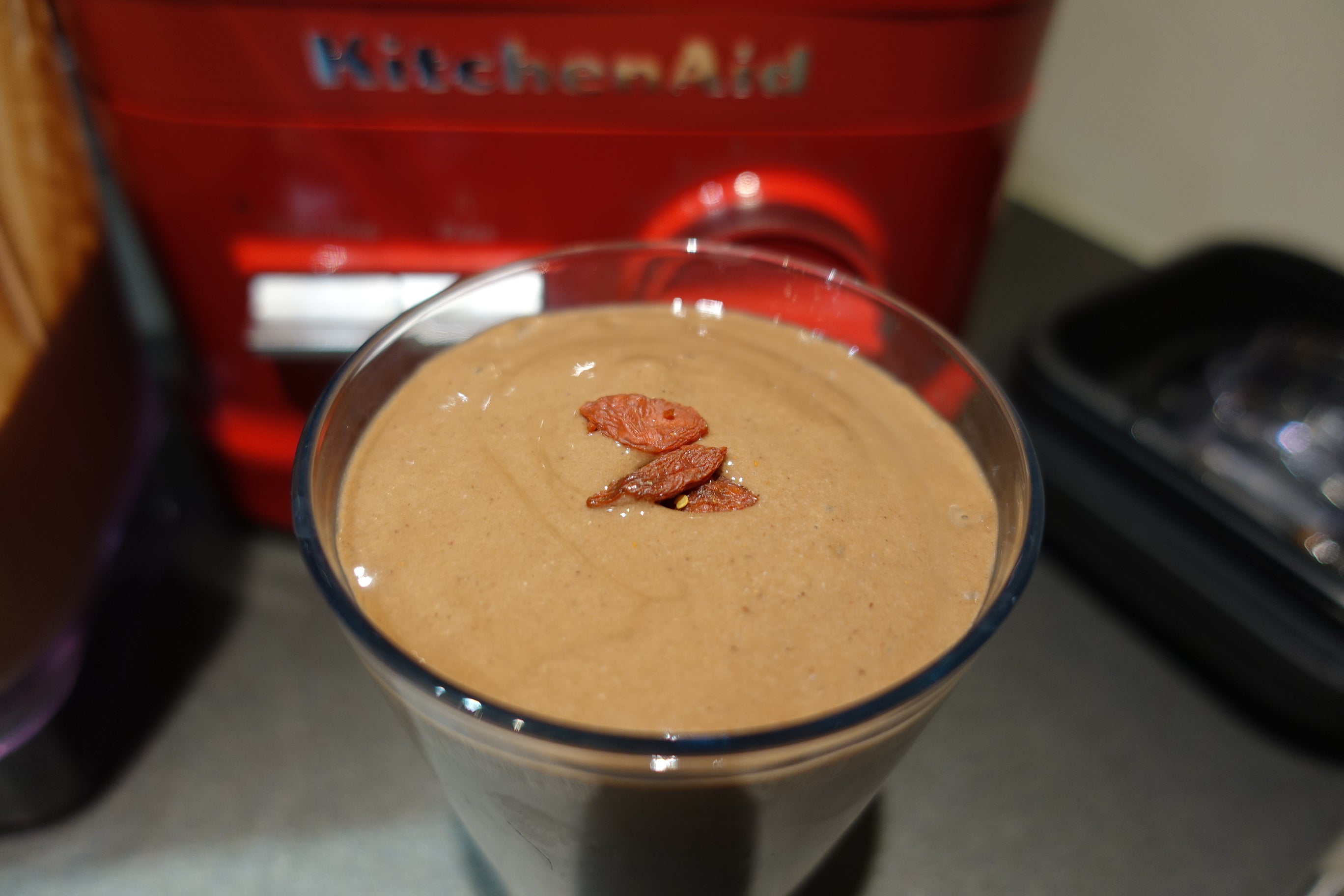 To crush ice, I pulsed six large ice cubes. After just 15 seconds the ice was crushed to a consistency suitable for adding to drinks. I then added rum, lime juice and syrup into the jug and blended the mix, increasing the speed from 6 to 8 for 20 seconds. The resulting cocktail was thick enough to pile up, but pleasantly smooth to drink through a straw. 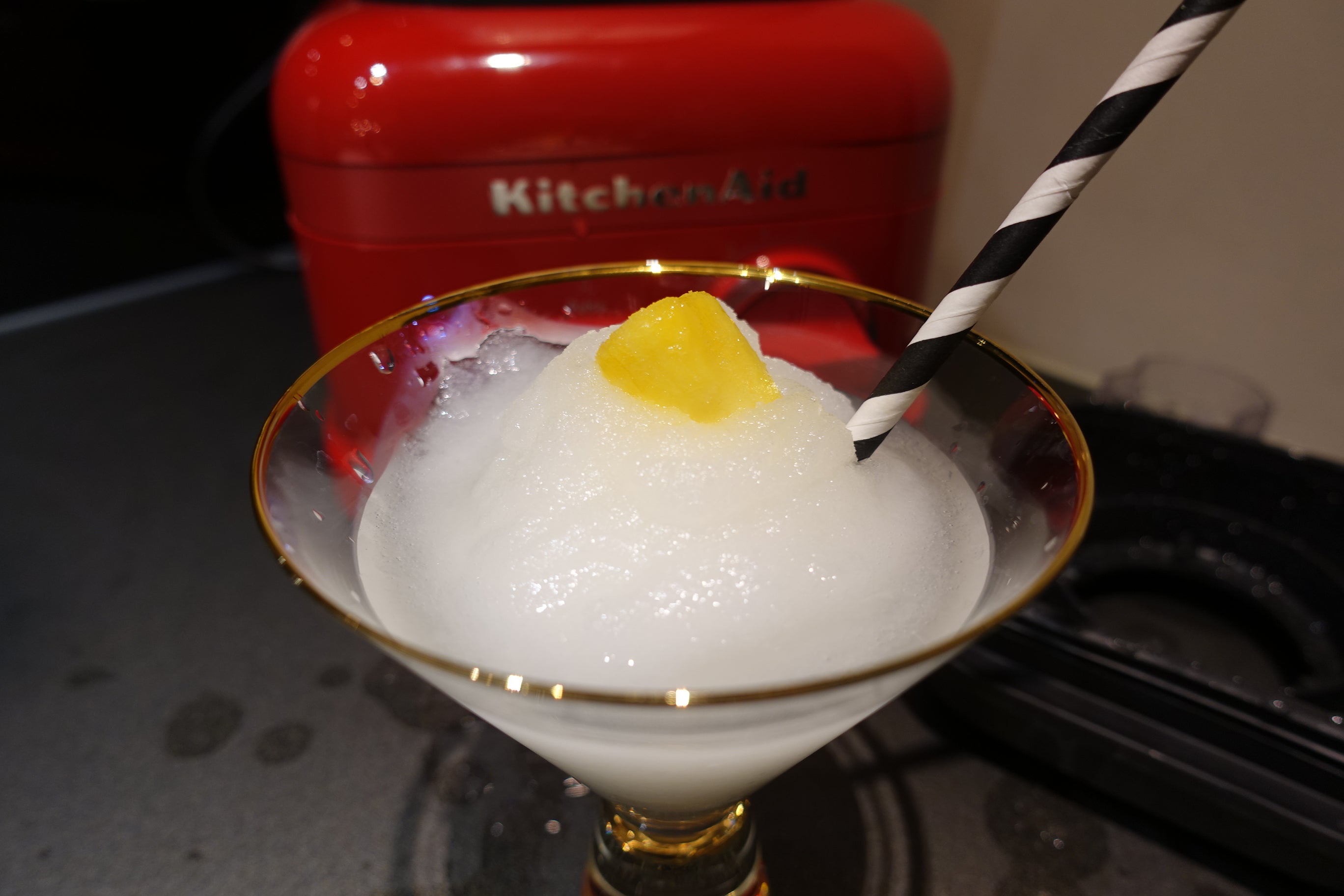 After adding a big handful of frozen pineapple cubes into the mix, I pulsed it for about 15 seconds, ending up with a boozy frozen dessert that could be drunk through a straw or eaten with a spoon. To make soup, I blended lightly boiled sweet potato and some vegetable stock for 20 seconds, going up to speed 10. Since this blender can take the heat, I could chuck everything in while it was still warm (about 60°C). The soup came out thick, but pretty even. I was particularly pleased with the result because I’d filled the jug right up to the maximum capacity. 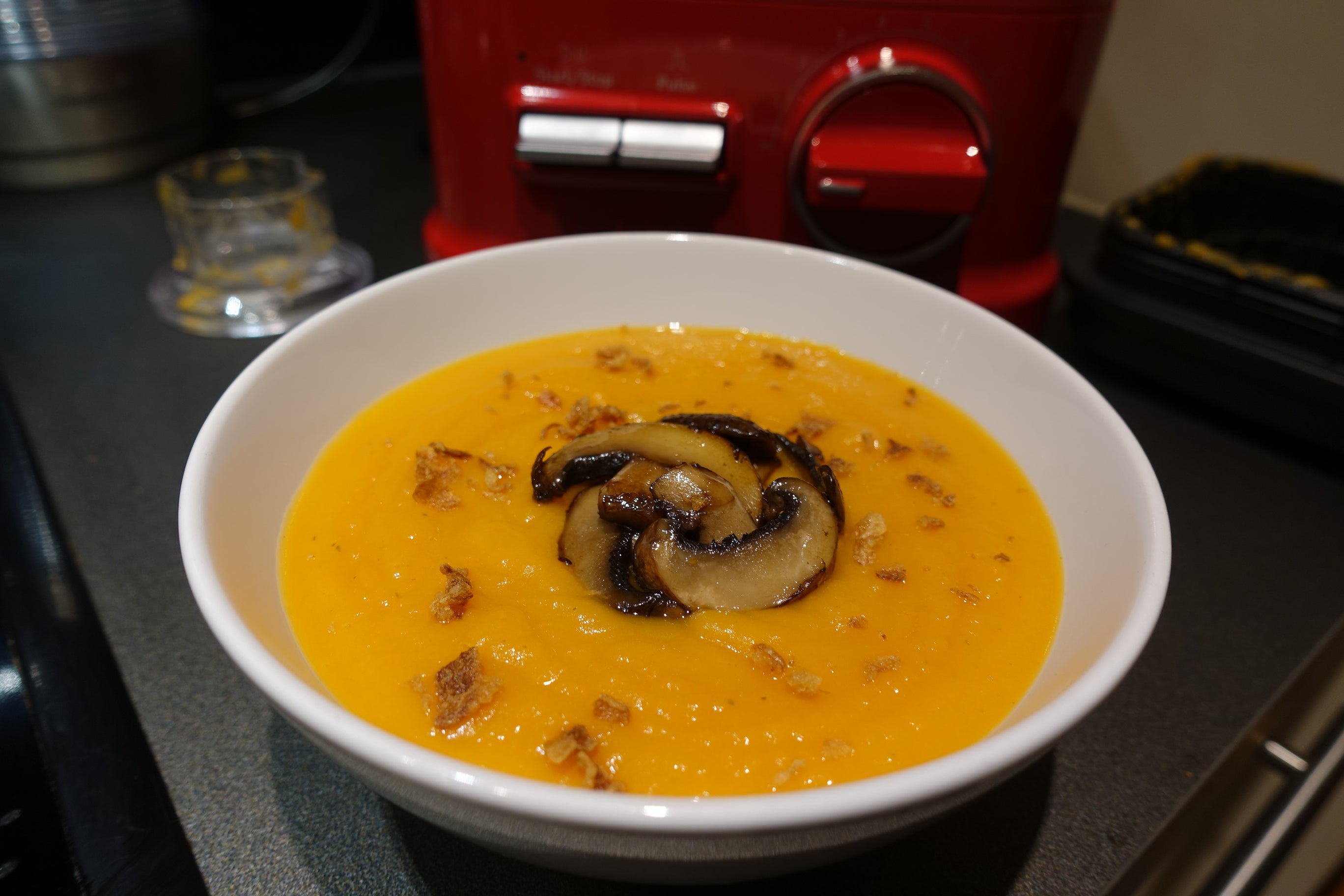 I then tried chopping some quartered onion, which took just 10 seconds of pulsing. The results were similar to those of a dedicated food processor. 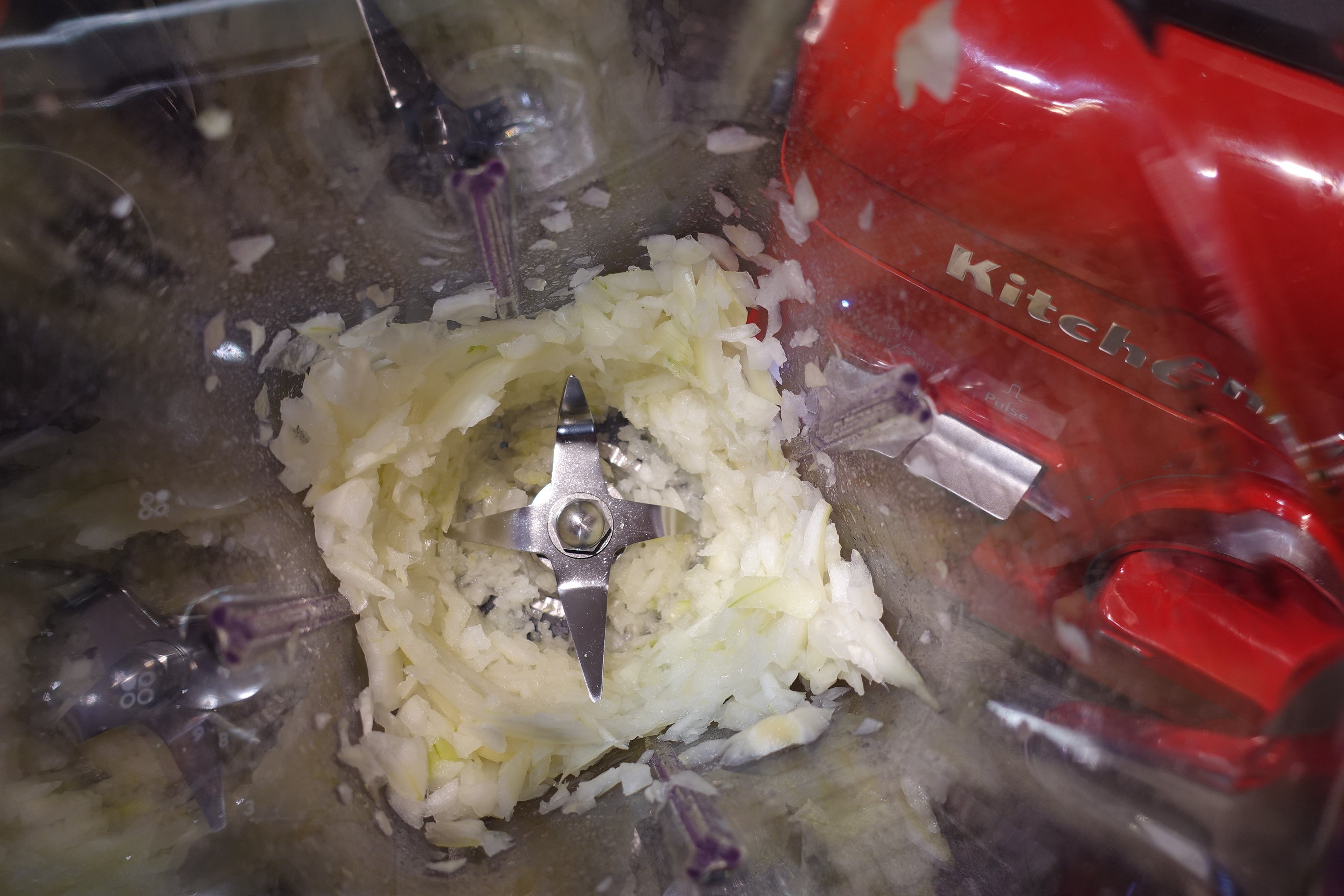 I had more of a struggle making nut butter. Gradually moving from speeds 1 to 8, I blended about 450g of dried roasted nuts for 1min 15secs, ending up with a jugful of unevenly crushed nuts. After a further 30 seconds at full speed, the mix looked more even, but it wasn’t turning into butter. 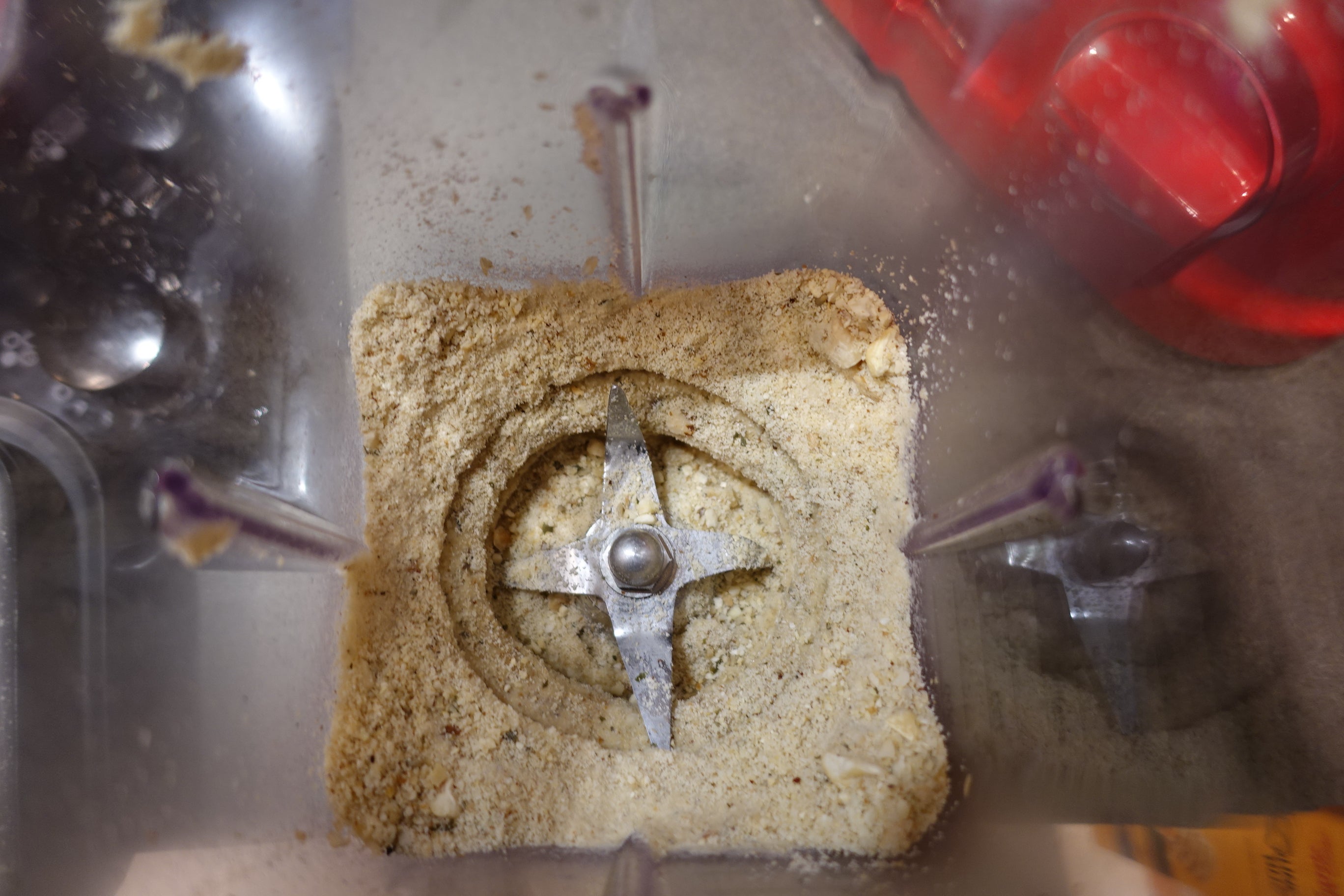 This was likely due to the fact the blades weren’t reaching the corners of the jug and a lot of crushed nut content was simply flung into the air.

After I added some sunflower oil, the butter started to take shape. However, I had to stop the blender and stir every once in a while, with the total mixing time being 2mins 45secs. The resulting nut butter was pretty smooth, but the process to get there wasn’t entirely straightforward. 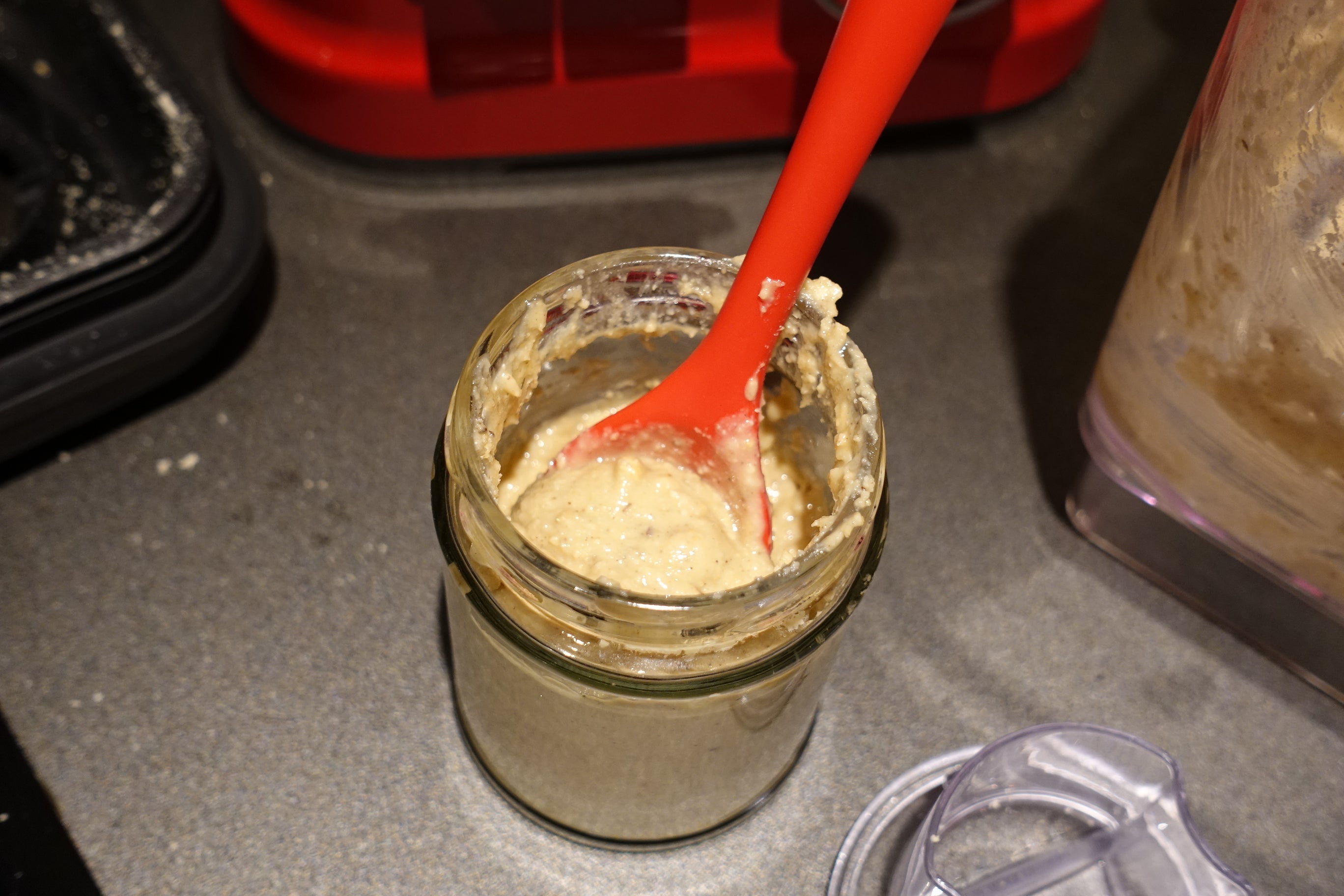 The jug can be placed on the bottom rack, while the lid, measuring cup and tamper can only go on the top rack of the dishwasher.

The blades aren’t removable, but the manual recommends blending a few drops of detergent with hot water at speed 10 for 35 seconds to remove anything stubbornly stuck to the blades. This worked fine, helping me to get rid of the remnants of nut butter that were difficult to remove otherwise. Should you buy the KitchenAid Artisan High Performance Blender 5KSB6060?

The KitchenAid Artisan High Performance is an excellent blender, but considering the lack of pre-set programmes, which would add to its convenience, the price here isn’t entirely justified.

However, the high-end blenders with programmes do tend to cost a little more – although the Vitamix Ascent A2300i is a bit cheaper. All that said, the KitchenAid Artisan High Performance blender can tackle all the hard stuff and is entirely dishwasher-safe, just like its rivals.