Exclusive to Nintendo 2DS/3DS
Are you a Kirby-hater? No need to be ashamed – we’ve been there too. The little pink blob has always been the toughest sell in Nintendo’s roster; not as lovable as Mario or as heroic as Link and Zelda; not as dastardly as Wario or as adorable as Yoshi.

While grown-up gamers can still revel in the antics of the little Italian plumber or his simian ex-nemesis, Donkey Kong, too many of us are all too happy to snigger at Kirby, and put his games down as ‘fine for the kids’.

Yet with Kirby: Triple Deluxe, we’re beginning to wonder whether the joke has been on us. It’s not just a decent platformer, but one of the best games to hit the Nintendo 3DS this year. 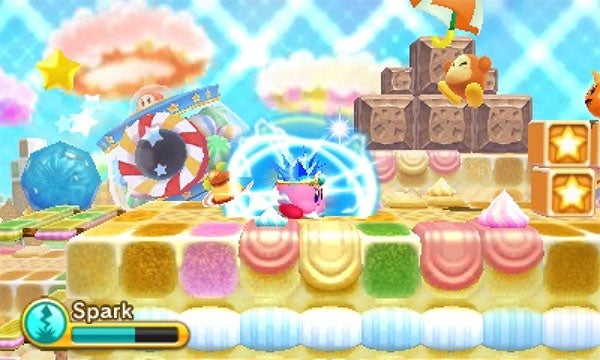 and stuffed with goodies that it’s almost impossible to resist.

Judged on graphics alone it’s one of the most exciting titles on the platform, not just filling its scrolling levels with dazzling colours and mind-boggling cartoon spectacle, but actually making good use of the 3DS’s 3D effects.

It’s a game where rollercoaster trains trundle from the background to the foreground to run Kirby down, while giant hands splat him flat against the screen. Bosses circle Kirby in the whole 3D space, or loom malevolently at the front of the image.

With commiserations to 2DS owners or those who can’t see stereoscopic effects, this is one of the few 3DS games where it’s worth pushing the 3D slider up. 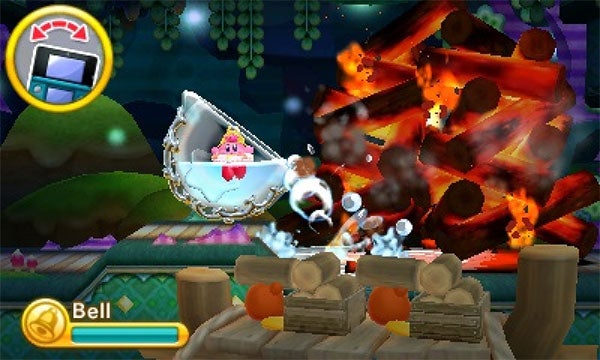 3D also forms part of the gameplay, and not just because you sometimes have to work on the Z axis just to dodge incoming threats.

For much of the game the action takes place on both foreground and background planes, with Kirby switching between the two by leaping towards transporting stars. Sometimes you’ll find vital keys or collectibles lurking in the background, while at other times doing something on one plane is crucial to making progress on the other.

There are even fantastic sequences that see you blasting away with a hard hat-mounted cannon at blocks and artillery on the horizon, firing into the background while dodging enemy fire.

Yet the real reason behind the success of Triple Deluxe is HAL’s seemingly boundless imagination. You’ve seen some of the tricks before in the New Super Mario Bros. or Super Mario 3D Land and 3D World, but like those games Triple Deluxe seems to cram some new mechanism, some odd idea or some brilliant new gadget into each and every level. 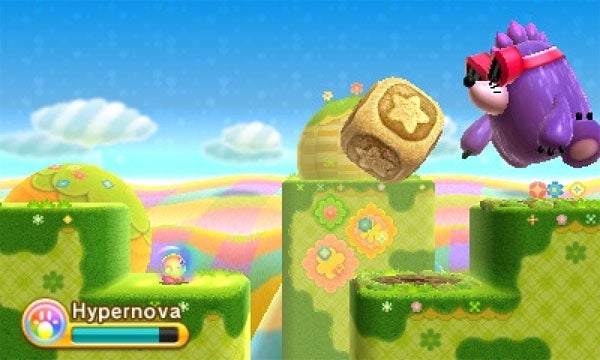 One level might have you checking reflections in a background mirror so that you can see what’s happening in obscured areas of the foreground. Another has you flipping between cascades of water, dodging chubby fish and hungry eels.

Yet another might have you puzzling your way through by pulling dangerous electrocuting crates into position, or lugging timebombs around to destroy stacks of blocks. There are levels that make brilliant use of the 3DS’s tilt controls, and levels that fling you around at ridiculous speeds. No two sequential levels have the same look and feel.

Then there are Kirby’s powers. As a blob he’s not all that beefy. He can suck enemies in then puff them out, and – instead of a double jump – he can puff himself up and float further or higher in the air.

His real potential comes into play, though, once he sucks in certain enemies and you press down to ingest them. Suddenly, Kirby takes on something of their powers, becoming a sword-wielding, star-flinging ninja, a whip-cracking cowboy, a horn-headed beetle or a baseball-capped racer who becomes a speeding wheel.

It’s hard not to love the bell-bashing Kirby, whose clanging bell blows become more powerful as they keep on dinging up the scale. The sheer number and variety of these guises just adds to the variety of Triple Deluxe. 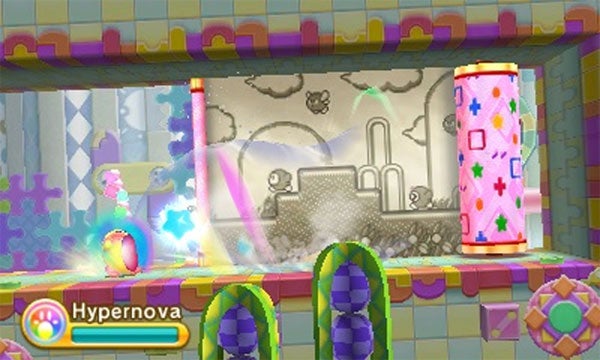 Things only become more epic once our hero ingests a certain fruit. His all-hoovering mouth goes into hyperdrive, sending out a vortex that sucks in vast chunks of scenery, hulking enemies and even whole rollercoaster trains.

Some levels push you to use it to suck double-decker buses, snowman heads or gargantuan turnips into position, while others just focus on cathartic, enemy-battering destruction. Either way, it’s brilliant fun.

Well, it’s all great so far, but at some point we have to talk about difficulty. Triple Deluxe is not particularly challenging. In fact, even those of us who thought that the Wii U’s Donkey Kong Country: Tropical Freeze erred on the side of too tough might feel that Triple Deluxe could be too much of a pushover.

If you’re halfway competent it will be a long time before you’ll find a level or a boss you can’t demolish on your first attempt. This is good news for younger or more casual gamers, but not necessarily the rest. 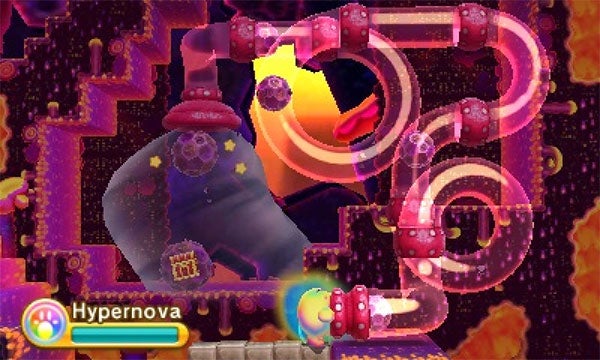 We’d argue, though, that it’s a bit of a non-issue. The fun here is in exploring, and in the ‘what trick will they pull next?’ that goes on in every level.

It’s a game that pushes you to keep looking, partly because it borrows the idea from recent Marios that key levels only unlock once you’ve collected enough of the sun stones hidden around each world. There are secret exits and optional keychain collectibles as well, so completists will find that there’s an awful lot of replay value.

Meanwhile, the main story is only one part of Triple Deluxe. One side-game, Dedede’s Drum Dash, is a slightly bizarre mix of 2D platforming and rhythm action that struggles to engage, but the other, Kirby Fighters, is a pretty fab little clone of Smash Bros. where the different Kirby costumes duke it out on 2D stages. Crucially, it works with download play, so if you have three friends with a 3DS you can all get stuck in.

Verdict
Kirby: Triple Deluxe is a bit of a treat. It’s a little too slight and lacking in major innovations to earn a place as a true platform classic, but it’s big-hearted, generous, good-looking and bursting with imagination.

If you really don’t like platformers or just can’t stand the thought of a game that stars a sweet pink blob, then you might still want to stay away. Otherwise, Triple Deluxe is – to our surprise – one of those essential Nintendo platform games.