Given that Kirby Star Allies is built around Kirby, a pink ball of goo, it should come as no surprise that this game is somewhat bonkers. Knowing that’s the point then, and that Nintendo has been working on the franchise for years, you’re in for quite the treat when you settle down to play this latest adventure on Nintendo Switch.

Unlike the more traditional approach, Kirby is joined by three friends – be that in-game AI or actual people – to engage in a spot of platforming and puzzling. It’s imperative that everyone pulls their weight, because teamwork comes front and centre here. As with most Nintendo games, trying to encourage more individuals to play together is what this is all about.

If you do that then you’re likely to enjoy yourself. As has always been the way, Kirby can inhale enemies in order to gain their powers; that’s how he gets through any potential scrapes. In Star Allies, however, you also get friend hearts – and tossing one of these at a would-be foe adds them to your team. You’re essentially building an army based on the threats you come up against, and as a concept it’s both oddly compelling and fun. 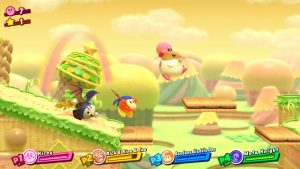 As you’d imagine, nothing beats having actual people to form a group. Nevertheless, the AI does a decent enough job of filling these roles if you don’t have anyone to join in. The AI isn’t as erratic as one might expect, although when they do misbehave it can be the most fun. Your AI partners never get in the way though, or feel like they’re stealing the spotlight. They’ll mostly follow your lead, so if you don’t care that this has been designed for multiplayer, the single-player experience is more than capable of allowing you to enjoy the game’s essence.

All the action takes place on one screen. You don’t have your own specific play area; instead, you have to march forward and back as a unit. But it is here that you realise that Star Allies is more than a run-of-the-mill platformer.

For starters, you can combine abilities within your party, which can then be used to progress. Not only do you have to experiment to figure out what works, but it’s then about harnessing your newfound power to overcome whatever obstacle lies in your way. It’s both challenging and satisfying, which is the point. 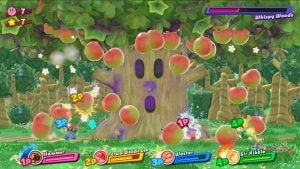 Kirby Star Allies also tries to keep you guessing what’s next, which really helps keep the game entertaining for its duration. While the norm is to have all four warriors duking it out together, on occasion you may be asked to separate into pairs and coordinate working through an area, or split off from one another to make a boss feel slightly different from another.

All of this works well, but if you’re intending to play this on your lonesome then the format may wear thin far sooner than you may have hoped for. Developer HAL Laboratory has balanced it as well as possible – but, ultimately, this is meant to be enjoyed with friends using either the Joy Con or Pro Controller (all of the Switch’s many controller combos will work).

It’s a different story when you team up with buddies, because even when the gameplay begins to fall into a familiar pattern, the jostling between you and your friends is where the most fun lies. This isn’t a criticism, either. If anything, the developers deserve massive credit for taking a recognisable face such as Kirby and ensuring that it not only falls into what the Switch is all about, but is also very accessible to those both familiar with the series and jumping in for the very first time. 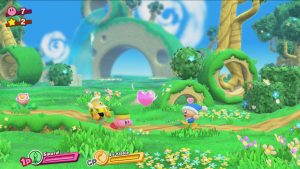 There are mini-games that sit alongside the story mode, too, where you’ll get involved in some truly nutty scenarios. These may see you trying to chop down a tree while things try to stop you, or you might be attempting to battle away a giant asteroid. They’re as dumb as they sound – but much like before, when Kirby is involved it always manages to fit.

So there’s a lot to Kirby Star Allies, and none of it could be described as bad in any sense. In fact, it’s all rather good. The game is another fine addition to the Switch’s library, which appears to be getting better with each passing month. This could easily open up a whole new audience to the blob.

A multiplayer spin on a formula that’s now been a success for years, Kirby maintains his relevance once again. It may deviate from what old-time fans were expecting – and again, played alone it isn’t as good – but still. If you simply want to put a smile on your face and have fun, Kirby Star Allies certainly ticks that requirement.

Kirby Star Allies is an entertaining multiplayer game that’s as Nintendo as they come. Played alone, it isn’t as fun, though.