Exclusive to Wii U
Against the odds, Nintendo’s Wii U is morphing into a sort of stealth-console. While it remains pretty much ignored by the general public, and a colossal flop as far as all the criteria for console-success are concerned, it has somehow managed to amass a half-decent portfolio of games, without anyone realising. Kirby and the Rainbow Paintbrush somewhat epitomises its under-the-radar approach: even Nintendo fans never massively warmed to Kirby, a pink sphere with little discernible personality, although 2010’s Kirby’s Epic Yarn, a Wii game that, beguilingly, appeared to be constructed entirely from wool, suggested there might be more to Kirby than hitherto suspected.

Kirby and the Rainbow Paintbrush, like Kirby’s Epic Yarn, takes an Arts and Crafts-style approach, except this time around, the game (and Kirby) have been constructed from virtual modelling clay. Typically for a Kirby game, it’s a side-scroller that mixes platforming and puzzles. But on this occasion, it makes use of one of the Wii U Gamepad’s unique capabilities, namely its touch-screen. 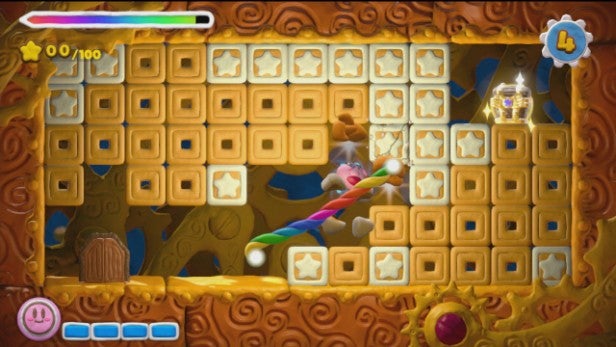 The game begins with all the colour being drained out of Kirby’s home planet, whereupon Kirby hooks up with a paintbrush-headed creature who allows you to draw rainbow-coloured ropes on the touch-screen, in order to guide Kirby’s progress. This is essential, since Kirby is singularly lacking in skills: you can tap him to move right or left across the landscape or double-tap him to launch a brief spin-attack. Collect enough of the stars dotted about each stage and he powers up with a Star Dash, a more powerful attack that’s required to break certain types of the blocks that form obstacles in each stage.

Techniques gradually emerge: for example, if Kirby is moving in the wrong direction, a vertical rope will bounce him back the right way. Ropes can be used as temporary shelter from lasers, bombs and spiky enemies, or as ramps to launch Kirby towards the top of the screen. Your supply of rope-drawing ink is finite, although it self-replenishes slowly, and you can find refill power-ups. And the ropes themselves disappear after a time, which becomes a factor in the puzzles later in the game. Plus, you can erase ropes drawn in error by drawing over them at right angles. 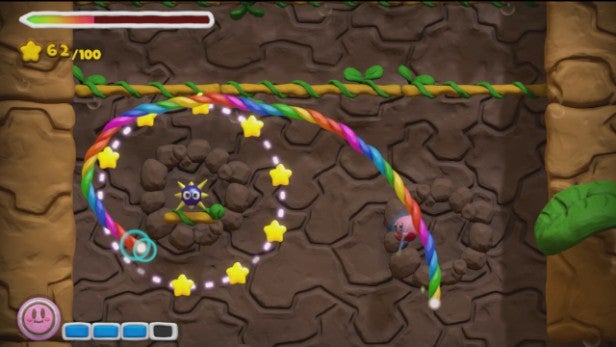 All of which makes for pretty distinctive gameplay, and Kirby and the Rainbow Paintbrush constantly throws cute little extra touches into the pot. At various points, Kirby transforms into a tank (that moves automatically, but fires where you tap), a submarine (that fires automatically, but moves where you tap) and a rocket, which has a reinforced nose-cone that can be used to take out enemies.

Puzzle elements are added by monochrome areas in which you can’t draw ropes (so you need to manage Kirby’s trajectory when he enters them); Donkey Kong Country-style barrels that shoot Kirby out; metal balls that you can guide like Kirby, in order to trigger switches; blue grids that turn pink when you enter them and reshape the environment; baskets suspended from arrays of ropes that you can reconfigure by drawing your own ropes; and much more.

At one point, you even get two Kirbys to control. There are timed mini-stages within stages, which usually let you collect the treasure-chests that contain the game’s collectibles — virtual figurines of enemies, plus rather tinkly music tracks. 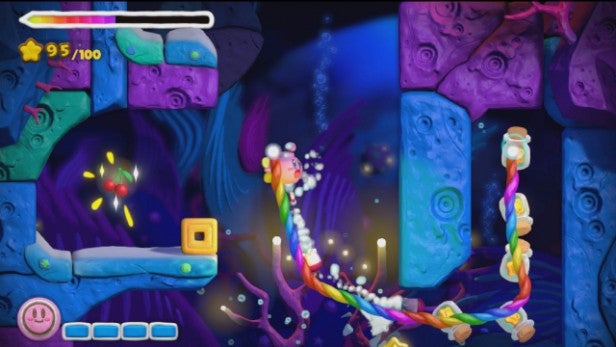 Impressively, given that it’s the sort of game you would characterise from afar as cute and throwaway, a physics engine also comes into play with, for example, levels that include waterfalls which you might either have to hold back with rainbow ropes or use to wash Kirby downwards into otherwise inaccessible areas. There are underwater levels in which currents dictate Kirby’s movement, and aerial areas in which winds blow him around, and he can bounce off clouds.  Despite the game’s fantasy-world appearance, it has a real-world physical logic that feeds into the gameplay.

And that gameplay keeps on giving all the way through. Kirby and the Rainbow Paintbrush is so full of ideas that there’s always something new to get you scratching your head. The difficulty curve is judiciously managed, too: it’s trivially easy at first, but soon ramps up until, at the end, it approaches near-Mario levels of fearsomeness. 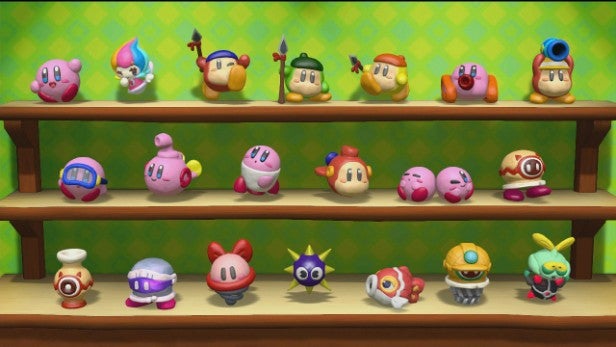 This also adds a bit of replayability: you often tend to rush through stages, eschewing the trickily placed treasure-chests and mini-stages, the first time you traverse them. It isn’t the longest game – there are seven levels, each with three normal stages and a boss-stage, and every time you complete a stage, you open a series of timed, bite-sized Challenges.

But the levels are long, with plenty of hidden areas, and it offers a fairly satisfying chunk of gameplay. The bosses aren’t the most challenging – although some require considerable persistence before you can take them down – but they are gloriously weird-looking, and a few recur with added twists. It supports Amiibo, but only Kirby, King Dedede and Meta Knight – which at least gives you an excuse to splash out on some obscure ones which could well end up as rarities. 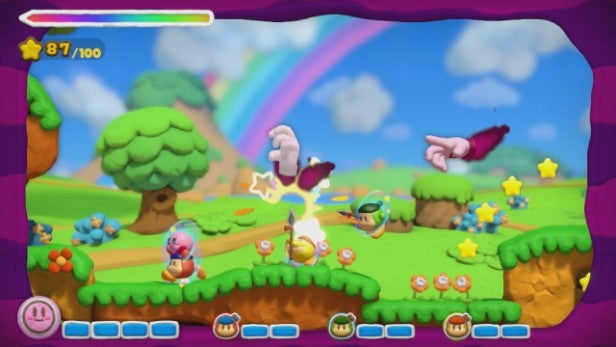 The level design constantly impresses, with little touches that will have you chortling – like the difficulty curve, it puts one in mind of the Mario games, which are generally acknowledged as showcasing some of the best level design ever. Clearly, Nintendo has assigned some of its top developers to the Kirby team – which smacks of individual involvement by Nintendo President and CEO Satoru Iwata, who was originally responsible for developing the very first Kirby game.

Verdict
Kirby and the Rainbow Paintbrush isn’t going to single-handedly change the face of gaming, or anything remotely as drastic, but it is nevertheless a very high-quality effort which showcases Nintendo’s strength as a developer and provides a thoroughly whimsical and surprisingly deep gameplay experience for those of all ages. In common with a growing number of its peers, it leaves you shaking your head and wondering how Nintendo managed to make such a mess of convincing the public that the Wii U was a worthwhile purchase.