Kingston always packs plenty of information into its model codes but the KVR800D2D8F5K2/2G kit I’m looking at today really does take the biscuit. Unfortunatley, to fully get to the bottom of what makes these modules tick we’re going to have to grab that bull by its horns.


From the front the KVR stands for Kingston ValueRAM, the 800MHz speed is self-explanatory, D2 is DDR2, D8 is Dual Rank x8 i.e. the number of memory chips and their layout, the 5 is CAS Latency 5, K2 is a Kit of two modules and the 2G denotes a capacity of 2GB. Take those final two pieces of information and you’ll see that this 2GB kit consists of two 1GB modules. However, the key part of the model code is the F, which stands for Fully Buffered and that’s the novel feature in this memory.


Intel started talking about Fully Buffered DIMM (FB-DIMM) for servers in 2004 at just about the same time that desktop users were getting used to the idea of moving from DDR to DDR2 memory. FB-DIMM addressed a specific problem with DDR memory as it is tricky to load a motherboard with more than two modules of DDR. You may recall the popular nForce chipsets for Socket A Athlon processors supported three memory slots, which always seemed like an odd choice, but with DDR it was the practical limit.


Getting your system memory to communicate effectively with the Northbridge in the case of Pentium 4 and Core 2 is difficult and fans of AMD face a similar battle with the Athlon 64 and Phenom, although the processor talks directly to the memory without the involvement of the chipset in this case. 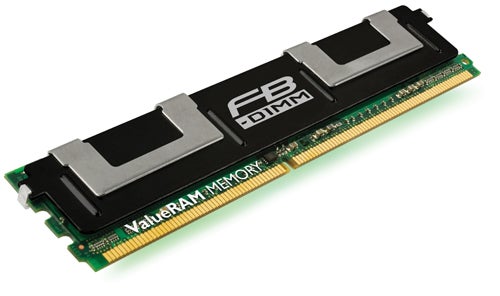 We PC merchants haven’t much cared that our motherboards are effectively limited to two modules of memory as 32-bit Windows XP is limited to 4GB of RAM, anyway. When you load your system with decent graphics the memory limit can then drop to 3GB so most of us have got used to using 2x1GB or even 2x512MB to get by. This is no good for the server market, however, where 8GB, 16GB or even 32GB of RAM can be needed.


To handle this amount of memory you need to build an incredibly expensive multi-layered motherboard so Intel decided to help out with FB-DIMM. Instead of the usual DDR/DDR2/DDR3 topography where the memory controller talks to every memory chip on every memory module FB-DIMM adds a memory controller called the AMB (Advanced Memory Buffer) to the centre of each module. With FB-DIMM the memory controller in your CPU or chipset talks to the AMB which communicates with the memory chips on the module and also to the next FB-DIMM on the motherboard. It’s a big change from a parallel layout to serial that simplifies the communication path to the memory and which allows the motherboard manufacturer to load the system with memory while simultaneously reducing manufacturing costs.


By my count that’s a win-win-win situation however there is a sting in the tail.


Although the memory chips on a FB-DIMM module are regular DDR2 chips there is the consideration that the memory manufacturer has to add the AMB chip so costs are necessarily slightly higher in that department. More significantly the FB-DIMM module has two separate power feeds with the usual 1.8V feed for the memory and a new 1.5V supply for the AMB. That doesn’t sound like much but where DDR2 modules are generally cool to the touch an FB-DIMM module carries a warning sticker that it gets hot. Once you’ve installed DDR2 you can pretty much forget about it, but not actively cooling FB-DIMMs would likely lead to a very short lifespan for your PC.

I’ve saved the worst news about FB-DIMM until last. The communication path through the AMB controllers is longer than conventional DDR2 so the latency sucks horribly.


When we reviewed the Patriot PVS32G1866LLK DDR3-1866 the latency varied from 58ns to 76ns depending on the clock speed. By contrast FB-DIMM runs over 100ns which is terrible news for the desktop where we have no intention of installing 8GB of memory or more, so the benefits of FB-DIMM are near non-existent.


The situation changed in February of this year when Intel launched its Skulltrail platform which uses its D5400XS motherboard to support dual LGA771 processors with a choice of CrossFire or SLI graphics. The choice of FB-DIMM memory for Skulltrail makes sense if you think of it as some sort of super-duper workstation as it supports up to 16GB of 800/667MHz 240-pin DDR2 FB-DIMM memory. Unfortunately FB-DIMM ruins the performance of Skulltrail for gamers and pretty much negates the value of the second quad-core processor. 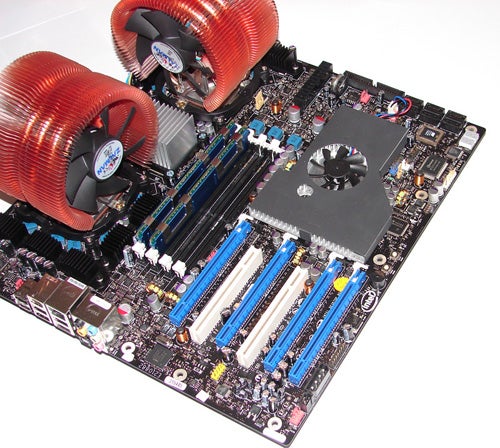 Skulltrail felt as though it should have colossal performance but instead it turned out to be a curiosity with eight CPU cores and four graphics slots. It lacked the necessary oomph to justify the fanfare that accompanied its launch and I was pointing the finger at the FB-DIMM memory as Intel sent the Skulltrail kit with two 2GB Micron PC2-6400/800MHz modules of FB-DIMM, which only occupied two of the four memory slots on the D5400XS. This seemed like the worst possible way to use FB-DIMM so we leapt at the opportunity to test two Kingston KVR800 kits. That’s a total of 4GB of memory in four modules so we’re talking about the same amount of memory at the same 800MHz speed.


Taking the 2x2GB Micron set-up as a baseline the Skulltrail delivers very similar performance to an Asus Rampage, which uses Intel’s more conventional X48 enthusiast chipset, and a single Core 2 Extreme QX9770 running at 3.8GHz. When you consider that our overclocked Skulltrail has two quad-cores running at 4.0GHz it’s impressive that the Rampage performed so admirably.


Switching to 2x1GB of the Kingston FB-DIMM took a tiny amount off the performance but it was the sort of change that only shows up in benchmarks. You won’t notice the difference between 2x2GB and 2x1GB in day-to-day usage but if you’re only using your Skulltrail PC to shop at Amazon there’s something fundamentally amiss.

Stepping up to 4x1GB of Kingston memory had a major impact in memory performance. Bandwidth increased by 11.5 percent bandwidth in Sandra which amounted to a 13 percent improvement in the Memory element of the PCMark05. That’s a huge return for simply swapping from two modules to four and it’s the reverse of what we expect from DDR2 memory as performance usually suffers when you increase the number of modules.


Changing from 2x2GB to 4x1GB has no effect on graphics performance and neither does it affect pure CPU performance in tests such as POV-Ray. Instead it gives you headroom when you’re hammering your gaming PC/workstation with colossal maps in your favourite game.


Intel’s decision to use FB-DIMM memory on Skulltrail shows that it is intended to be a workstation rather than a gaming platform. It’s clear that the smart move is to populate all four slots with FB-DIMM memory but we’ll be far happier when Intel delivers Skulltrail 2 with DDR3 memory. 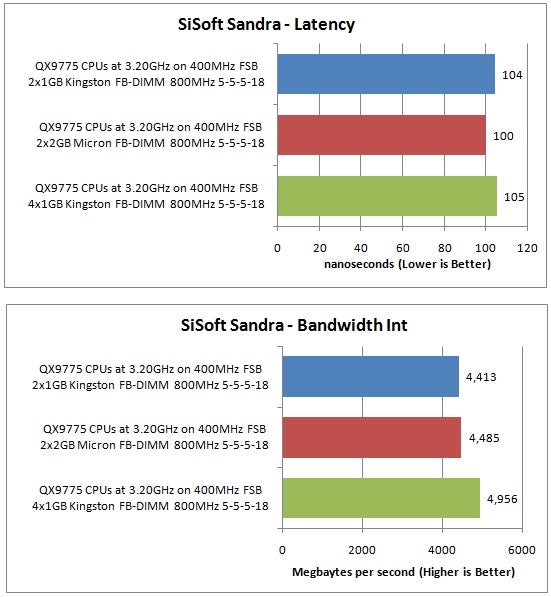 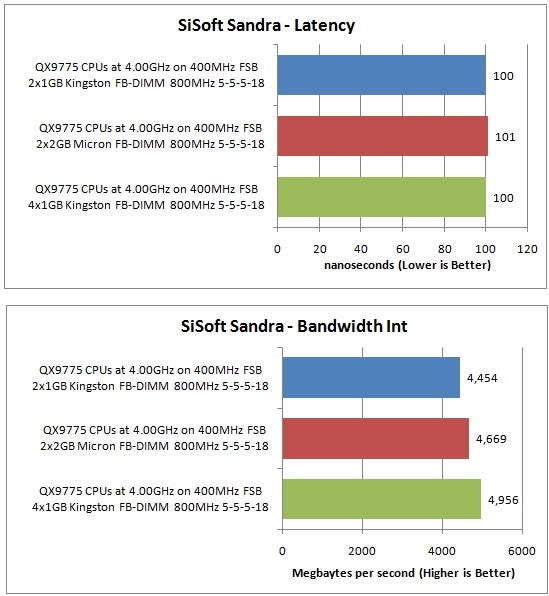