Kingston had a fairly bad time in our memory round-up during the summer, so there was an air of apprehension when some time later when we received some replacement HyperX 1333MHz DDR3 in the mail. The specification hadn’t changed, which was something of a worry, but on the upside we noticed that the heat spreaders had been updated and the new modules looked very smart.


We’re well aware that a change to the aluminium covers on a module of memory is a minor matter that satisfies you just as long as it takes to install the memory. Out of sight is quite literally out of mind, but the new Kingston modules look very good indeed. The aluminium covers have been anodized blue and then machined to create a mirrored portion, which makes them a bit of a sod to photograph as you can’t see the finely patterned machining marks but hopefully you get the idea. 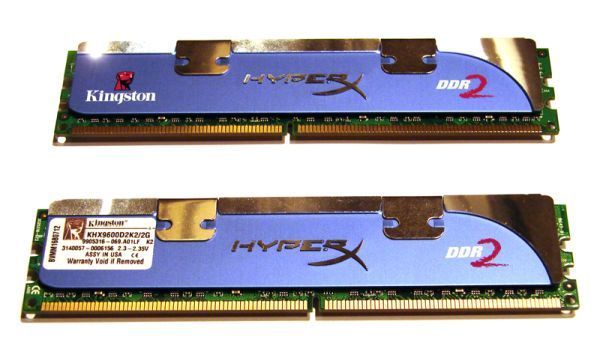 The problem is that I haven’t been all that impressed by the fast DDR3 I’ve reviewed over the past month or two as though the clock speeds can be quite astronomical yet it doesn’t result in a great deal of performance. The proof lies in the Asus Maximus Extreme, which runs DDR3 but achieves the same performance from the DDR2 Maximus Formula SE.


So imagine our joy when another package arrived in the mail from Kingston. This time it was a set of HyperX DDR2 KHX9600D2K2/2G modules, rated as PC2-9600 with a maximum effective clock speed of 1,200MHz. That’s fast enough to satisfy the most extreme Core 2 overclocker and happily for us the new DDR2 has the same swanky heat spreaders as the DDR3.

This means the memory multiplier is 1.2x the front-side bus. We could manually select a memory speed of 1,000MHz without trouble using a 1.5x multiplier so we checked the next option in the BIOS, which was a 1.66x multiplier. This promised a speed of 1,100MHz but the Abit wouldn’t POST and the on-board LED indicator made it clear that the memory was the problem.


Raising the front-side bus to 410MHz gave a CPU speed of 3.28GHz, which is a healthy improvement on the standard 2.66GHz but once again the Kingston topped out at a low speed. This time it was 984MHz on a multiplier of 1.2x so it looked as though our 1,200MHz memory didn’t want to run past 1,000MHz on the Abit. We raised the RAM and Northbridge voltages and persuaded the system to boot in to Windows on a 430MHz front-side bus with the memory running at 1,032MHz but that was as good as it got.

For comparison we plugged in our old stand-by OCZ Reaper PC2-9200, which costs a similar £125 for 2GB. The OCZ has different SPD settings to the Kingston and as a result the BIOS throws up different options so running the front-side bus at 410MHz front-side bus gave us a memory multiplier of 1.25x instead of 1.2x. This meant the OCZ ran at 1,025MHz instead of the 984MHz we saw with the Kingston memory but the difference in performance was negligible.


The next step was to switch to a Core 2 Quad Q6600. This runs on a 266MHz front-side bus so has better potential for overclocking than the E6750. The Q6600 did indeed separate the two types of memory as the Kingston would enable us to overclock to a 320MHz front-side bus with a 1.5x memory multiplier that gave a memory speed of 960MHz. 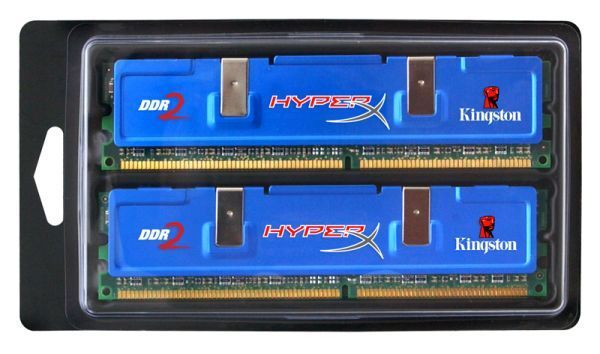 We got a higher CPU speed with the OCZ Reaper as we could raise the front-side bus to 350MHz but the memory multiplier was only 1.25x so the memory speed was 875MHz, nearly 100MHz slower than the Kingston.


The result was better system and CPU performance with the OCZ memory but the Kingston delivered better memory bandwidth. In theory the Kingston KHX9600 delivered the goods but in practice the OCZ was the better option.


The Kingston didn’t come close to its enormous 1,200MHz rated speed on our Abit P35 test platform but neither did the OCZ we used for comparison. Of course that’s disappointing but the KHX9600 was rock-steady and delivered sterling performance at a surprisingly reasonable price.


As pointed out by reader Lars Goran Nilsson, who just happens to be TrustedReview’s former Technical Editor, the Kingston HyperX KHX9600 DIMMSs needs to be run at 2.3-2.35V to reach its potential.


With 2.30V for the memory and 1.41V on the Northbridge/Memory Controller Hub I cranked the front-side bus up and found that the Kingston would now run one notch above its previous best of 984MHz and was now happy at 1,025MHz. On a 410MHz front-side bus that’s the difference between a multiplier of 1.2x and 1.25x – i.e. not very much. To add insult to injury the performance was slightly lower at the new speed.


The next speed option in the Abit BIOS was 1,230MHz on a 1.5x memory multiplier but the system refused to POST. I tried raising the CPU voltage by +0.2V to see whether more front-side bus was available but had no joy. I also tried dropping the bus speed down to 390MHz to bring the 1.5x multiplier within the 1,200MHz limit of the memory.


For comparison I plugged in the OCZ Reaper 1,150MHz I used in the original review and it too failed to respond to the extra voltage so it sounds like the Abit motherboard is the common factor here.


The moral of this tale is that decent memory is not enough to guarantee enormous overclocked speeds and if you don’t read the specs of your components you’re making life even more difficult.


Thanks Lars. Sorry Kingston. However, my original scores remain unchanged.