You’ll be used to the rhythm and flow of the memory reviews that we run on TrustedReviews. Every month or so we get our hands on some incredibly fast memory that helps us to extract the last scrap of performance from whichever motherboard and processor we’ve got strapped to the test bench.


We’ve worked our way through a stack of DDR2 and DDR3 while the clock speeds head to 1,600MHz and beyond. Every so often we mix things up and throw in a 4GB kit instead of the usual 2GB or we take a look at FB-DIMM, but the common theme has been increased clock speed and higher performance. 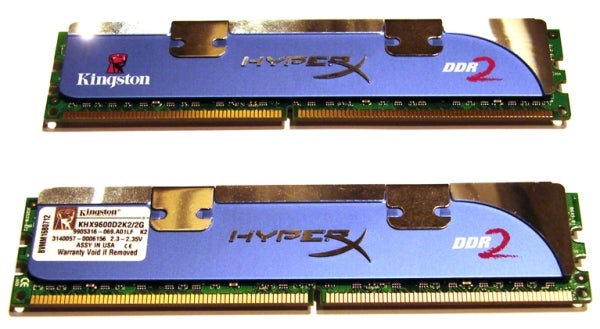 This week we’re doing something that might look a bit odd. Last November we reviewed a 2GB kit of Kingston KHX9600, which has a maximum effective clock speed of 1,200MHz. That’s a true clock speed of 600MHz, which outstrips any front side bus setting we can imagine seeing on a Core 2 system. If we ignore the exotic Core 2 Extreme QX9770 with its 400MHz/1,600MHz front side bus, you’d have to take a 333MHz/1,333MHz processor to a very uncomfortable place to approach that sort of clock speed.


One significant difference between the two speeds of memory is the price. The KHX9600 has dropped slightly in price since our review but it still sells for an uncomfortable £106 at Overclockers. Heck that’s more expensive than 2GB of DDR3-1333, but the 2GB kit of KHX9200 is much cheaper at £59. That’s a fair chunk of change so we have to address the question; is the extra 25MHz offered by the KHX9600 worth having? Or, to put it another way, can you get your fast DDR2 memory to run at 1,150MHz let alone 1,200MHz?


These are good questions so we broke out an Asus P5Q Deluxe motherboard with P45 chipset along with a Core 2 Extreme QX9650 processor, which runs at 3.0GHz on a 333MHz/1,333MHz front side bus. In anticipation of the overclocking that was to come we stuck 2.30V into the memory and 1.30V into the CPU rather than using the Auto settings.

The first step was a basic run of PCMark05 and SiSoft Sandra at stock speeds, just to check that everything was working properly. With the KHX9200 and KHX9600 running at 1,066MHz and the processor at 3.0GHz the performance of the two systems was identical. Good, that’s what we hoped to see.


Now it was time to overclock the KHX9200 to see how close we could get to its ceiling of 1,150MHz. With the clock multiplier at 9x we could raise the front side bus from 333MHz to 400MHz for a clock speed of 3.6GHz. Lowering the multiplier to 8x allowed us to raise the front side bus to 460MHz for a slightly higher clock speed of 3.68GHz with a memory speed of 1,105MHz. This was very promising as the memory appeared to be delivering the goods but we were using a memory multiplier of 1.2x, so it seemed as though there was the potential for a higher front side bus. 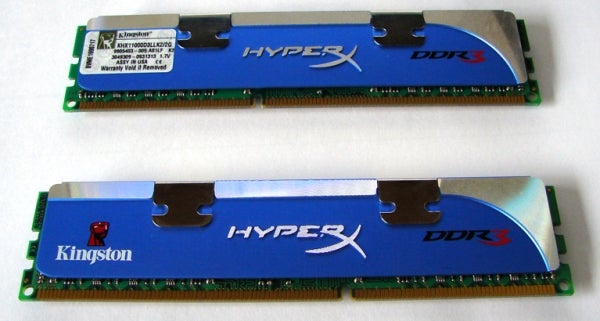 Dropping the multiplier to 7x with a front side bus of 500MHz seemed like a good idea as the resulting 3.5GHz CPU speed was clearly within its capabilities. In practice, though, it was a very poor idea as the Asus P5Q went bananas and reported that the BIOS had been corrupted and was restoring itself from a back-up. Once that was complete we were able to load the latest BIOS version 0506 and get back to testing. The final shot in our locker was to drop the CPU multiplier even lower to 6x with a front side bus of 550MHz and while these settings failed to corrupt the BIOS the system refused to load Windows.


It was time to switch to the KHX9600 to see whether the higher speed of the older memory would offer any benefit. The starting point was the maximum settings that had worked with the KHX9200 so that was 8x460MHz for a CPU clock speed of 3.68GHz, with the memory running at 1,105MHz. The higher speed limit of the KHX9600 meant that we could raise the memory multiplier higher to 1.33x for a memory speed of 1,226MHz. While it was satisfying to see the Kingston DDR2 hit its stated speed the extra performance was fairly negligible, so it was time to see whether the faster memory had an extra trick up its sleeve.


The KHX9200 had been unable to load Windows with the CPU running at 8x480MHz and the memory at 1,153MHz. With the KHX9600 Windows started and we were able to run SiSoft Sandra, though PCMark05 crashed almost immediately.


Settings of 7.5x500MHz looked plausible as the system POSTed with the memory running at 1,200MHz, but the system hung while loading Windows. The net result of using the faster KHX9600 was an avoidance of the BIOS corruption that we suffered with the KHX9200 and higher memory speed when we overclocked the QX9650 to 3.68GHz.


With the combination of motherboard and processor that we used the cheaper KHX9200 performed admirably well. Unless you are certain you can push your front side bus past 500MHz it’s hard to imagine that you need memory that runs any faster than the 1,150MHz offered by the KHX9200.


In our tests both the KHX9200 and KHX9600 ran at their stated maximum speeds when we overclocked the front side bus. Although the KHX9600 was slightly faster it didn’t deliver enough performance to merit a premium, so we’d be happy to stick to the Kingston KHX9200 and at £59 it’s a lot cheaper, too. 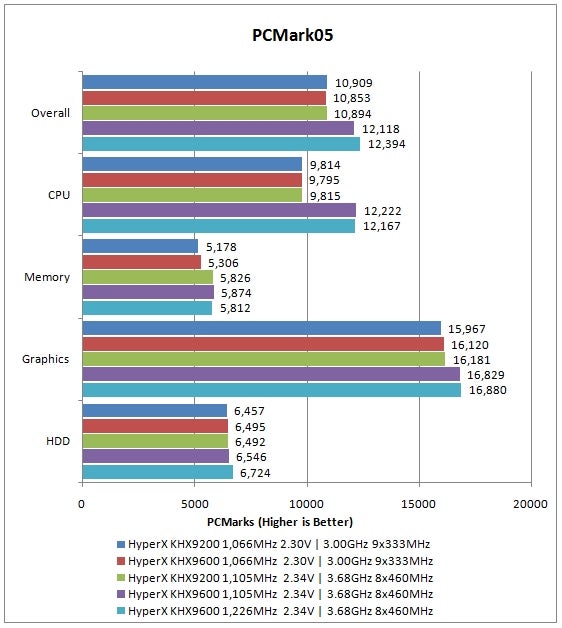 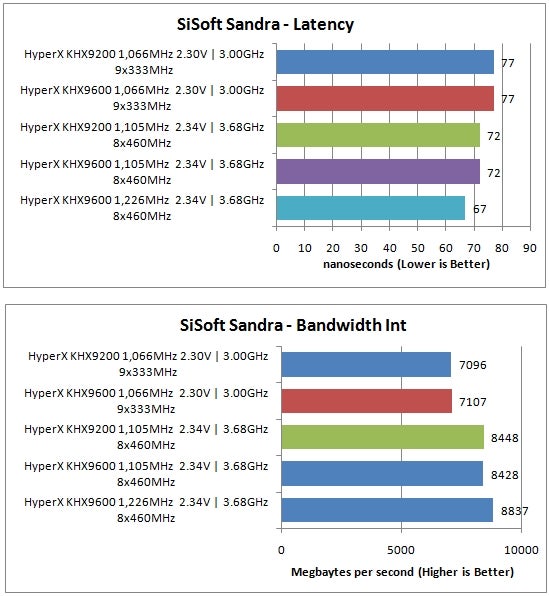