Occasionally, you pick up a product and simply think, – why has no one thought of this before? The DataTraveller Reader from Kingston falls firmly into that category. As Gordon reported earlier this month, it’s a USB based card reader that can accept all forms of SD cards, with the cool feature being that it has 2GB of flash memory embedded inside it.


The complete list of formats supported are SD, SDHC, MMC, and MMCplus and if you use an adaptor, you can insert miniSD, microSD, RS-MMC, MMCmobile and MMCmicro. Sony’s MemoryStick formats and Olympus/FujiFilm’s xD are not invited to the party. Support for SDHC though is quite a big deal, as many existing SD card readers won’t recognise the new high capacity format. 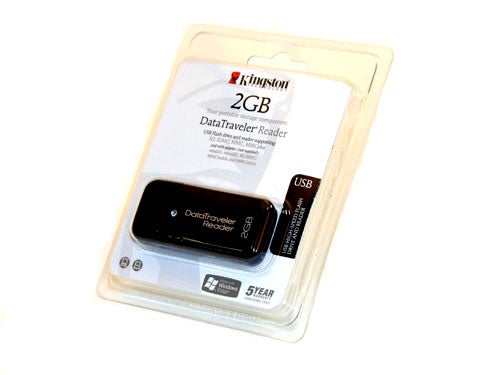 When I heard how clever Kingston had been in including 2GB of memory into a card reader I was impressed, but when I actually got my hands on the product I have to say that I was a little disappointed. The device is inevitably wider than a regular USB key as it has to accommodate a full size SD card. However, the build quality isn’t quite as good as it could be. It’s made of plastic that both looks and feels a bit cheap – though one could hardly expect more at the price.


An external card is inserted by lifting up a flap, and a plastic strip is used to slide the card out. This has ridges on it so your fingers can get a purchase. The problem with the lid that that is just feels flimsy and I would have preferred a slot loading device.


I wasn’t that keen on the other end either. The USB port has a simple plastic lid that doesn’t do anything clever such as slide back or fold – you just pop it off, which is just asking to be mislaid. The way to avoid this though, is to attach the supplied lanyard using a small hole in the side of the cap and a hook that’s located in the corner next to the USB connector. 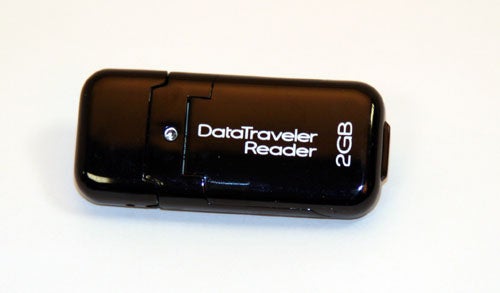 When you plug in the DataTaveller a small yellow light illuminates and it flashes when data is transferring across. The Kingston naturally doesn’t need drivers for XP, Vista or MacOS and is simply recognised as a Mass Storage Device. It takes a bit longer than you would expect to pop up as a drive letter the first time you insert it as Windows/MacOS has to recognise it both as a USB memory key and as a card reader and as such, two separate drive letters appear. Therefore, if you have a card in, its completely separate to the internal memory – so you have say, 4GB + 2GB, rather than 6GB in total.

Kinston has a range of DataTraveller drives that are designed to support Windows Vista’s ReadyBoost, so one of the first things I wondered was whether this one would be recognised by Vista as a ReadyBoost drive. If so, it would be quite cool, seeing as 8GB SDHC memory cards have just been announced. Testing for this was quite easy – I just plugged it into a laptop running Vista. If you plug a ReadyBoost compatible drive into Vista a pop up box asks you if you wish to use it for ReadyBoost purposes – and that didn’t happen. Checking the properties confirmed that the drive isn’t fast enough, which was a disappointment. However, I then inserted a 4GB Kingston SDHC card into the reader and then tried again – that did work, with the ReadyBoost tab giving me use the option to use the full capacity of the card.


I decided then to test the performance of the internal 2GB memory on the drive, though with it failing to be fast enough for ReadyBoost, I was hardly expecting fireworks. This proved to be the case, with a 700MB file transferring across in one minute 39 seconds – 7.07MB/s – a lot slower than my current USB stick of choice, a SanDisk Cruzer. The problem isn’t the interface though, as copying the same file across to a 4GB SDHC card took only 55 seconds – 12.73MB/s. The difference between reading off the internal memory and the card were even greater – 700MBs took one minute 21 seconds to copy from the drive (8.64MB/s) and only 29 seconds from the card (24.14MB/s).


With these kinds of scores I’d think of the DataTraveller/Reader as a SDHC card reader first with a handy 2GB of memory built in, rather than primarily a USB memory key. The relative bulk of the drive would mean that you’d probably think of it that way anyhow. It also got quite hot after a few minutes copying to and from the drive. 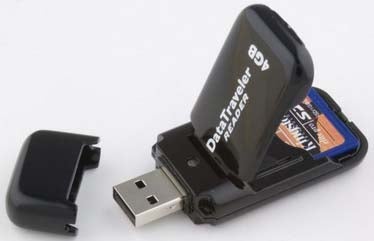 On the upside it won’t be breaking that bank as the RRP for the 2GB version is only £23 including VAT, while the 1GB version will only cost £11.60. At the time of writing it’s not quite yet available in the shops, but you can expect online prices to be cheaper still, which is good news for the forthcoming 4GB version.


All in all, as a USB memory key this device is a bit disappointing, being slow, hot, and bulky. However, if you think of it as a card reader with some extra memory thrown in, it makes more sense and at the price you can hardly go wrong.


As long as you think of it as a SDHC card reader with memory built-in rather than the other way round, Kingston’s Data Traveller Reader is a really neat idea. The build quality isn’t amazing, the internal memory isn’t the fastest and it’s a shame it’s SD only, but it’s still refreshingly innovative.