What are you without a USB flash drive? Seriously, if you don’t have one you must be some kind of insane madman who’s still just hoopy about the invention of the digital watch. For carrying around important files there’s simply no easier way, and with flash memory being so cheap there’s little excuse not to have one.


As a result of this cheapness USB drives are ten-a-penny, and normally we wouldn’t bat an eyelid at a USB flash drive landing on our desks. But, in this instance, we were intrigued because this 1GB drive from Kingston was emblazoned with “Enhanced for Windows ReadyBoost”. 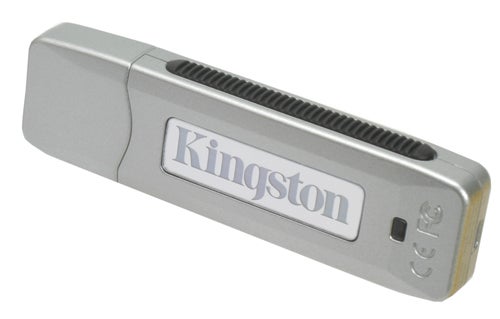 So, what is ReadyBoost you ask? It acts as an extension of Vista’s SuperFetch feature, which loads frequently used files and programs into the system memory so that they load significantly faster than if they loaded directly from the hard drive. As a result Vista is far better at utilising large memory configurations in excess of 2GB, and power users will certainly reap the benefits.


ReadyBoost does much the same as SuperFetch, albeit with some limitations because although flash memory boasts excellent access times, it’s still a good deal slower than a hard drive for transferring larger files.


Nevertheless, there are still some benefits to be had and ReadyBoost will utilise compatible flash memory for caching system files and the system page file in an attempt to give some kind of performance boost.


It’s worth noting that you can’t use any old flash memory for ReadyBoost, to prevent degradation of performance you must use flash memory that meets certain minimum requirements. If you’re using a USB flash drive then it must be USB 2.0, while any memory must be capable of 3.5MB/s for 4KB random reads and 2.5MB/s for 512KB random writes.


The USB Flash Drive Kingston has sent us is 1GB, and the company claims that it exceeds the data transfer requirements. Other than the ReadyBoost certification it’s a very typical and entirely unremarkable flash drive. It looks just like any you’ve seen or used in the past, and it isn’t so tough that it can survive being run over by a car or other such nonsense. It’s just some plastic; nothing to get too excited about.


Setting up ReadyBoost is an eminently simple case of inserting a compatible memory device into a Vista PC and then, when prompted, selecting the option to use it for ReadyBoost. By going to the ‘Properties’ dialog of the device you can select the amount of memory you wish to dedicate to ReadyBoost, so you can choose to keep some memory for storage should you wish.

To test the validity of ReadyBoost, and see if the Kingston ReadyFlash would help performance, we first ran PC Mark’s HDD Tests using a notebook running Vista. Since notebooks are generally less powerful, and harder to upgrade, they’re the most likely candidates that might benefit from ReadyBoost making this a real world test.


The notebook in question was the Asus U1F that Riyad recently reviewed, which has an Intel Dual Core U2400 running at 1.06GHz, with 1GB of system memory, 60GB hard disk. Riyad noted in his review that he found it rather sluggish under Vista, and suggested that potential purchasers specify 2GB RAM at point of purchase. Does ReadyBoost have any effect? 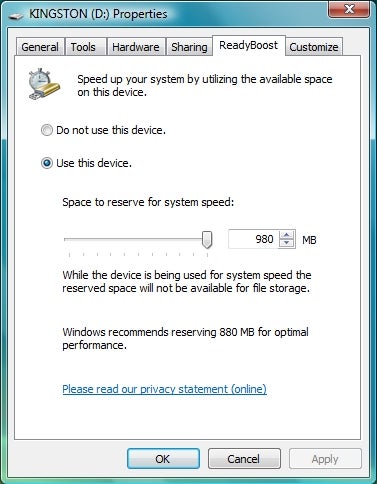 First, the PC Mark tests suggest that it certainly does. We re-ran the hard drive tests without ReadyBoost and got a score of 2310, and subsequent tests showed significant improvements when the USB device was inserted and dedicated to caching.


Although PC Mark tests are more of an indicator of performance, these figures suggest there’s certainly a significant amount of extra performance to be had when using ReadyBoost. Moreover, in general usage the notebook was noticeably snappier when loading programs. This isn’t to say it was a revolutionary improvement, but it was noticeable enough that it appears worthwhile.


As another indicator we decided to do a quick and simple test on our games machine, which boasts a rather meatier AMD Athlon 64 FX-60 Dual Core CPU running at 2.63GHz and 2GB of Corsair Pro Series RAM. 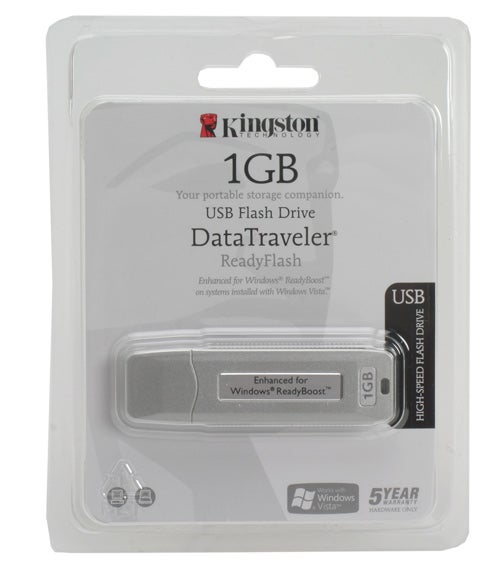 We timed how long it took to load an Oblivion save game file, comparing times when using 1GB of ReadyBoost cache to none whatsoever. After running the test several times we found that on average ReadyBoost reduced the load time by just under 15 seconds, an impressive return on a £13 investment.


Over time you’ll certainly notice that kind of difference and we’d certainly like to see whether ReadyBoost has a similar impact on in-game loading, though this is rather more difficult to test.


It appears that ReadyBoost does indeed work, and the Kingston 1GB DataTraveler ReadyFlash drive is an excellent and dirt cheap way of boosting Vista performance. Ideally we’d like it to be smaller since we already know Kingston can make far smaller USB flash drives, but otherwise it does a fine job.