The Odd Gentleman’s revival of King’s Quest has been one of the nicest surprises we’ve had this year. It arrived without the fanfare that greeted, say, Telltale’s Monkey Island series or Double Fine’s Broken Age, yet in its first chapter did a better job of recreating the magic of the classic graphic adventures.

A Knight to Remember had humour, personality and an enjoyable tale to tell, but it didn’t stint on the multi-layered, mind-bending puzzles that, when it comes to it, are the heart of the genre. You might complain that it was a little too indebted to old Sierra and Lucasarts classics or that it owed an awful lot to The Princess Bride, but if that’s the worst thing you can say about a game, what more recommendation do you need?

Chapter 2: Rubble Without a Cause, follows on in much the same vein. It has the same basic setup – the aged, bed-ridden King telling stories to his precocious granddaughter – but this time the narrative has moved on beyond King Graham’s days as a young and irresponsible wannabe knight to his days as a young and irresponsible regent. In Grandpa’s new bedtime story, the young king of Daventry finds himself imprisoned by the tribe of the rock-like goblins you might remember from Chapter 1. Nor is he alone, with several familiar faces from the town trapped in the Goblin’s dungeons with him. This time, it’s all about escape. 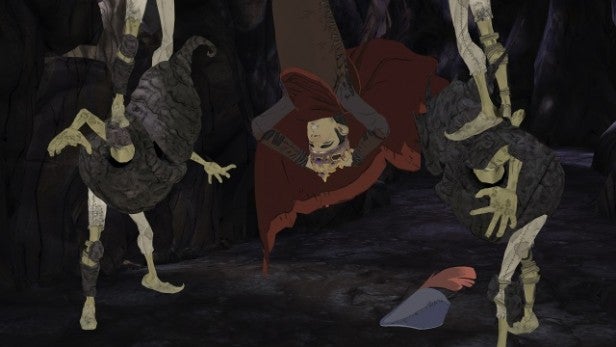 The visuals and interface remain unchanged from Chapter 1, the graphics aiming for a cel-shaded cartoon look that’s part classic Disney and part recent Telltale, and the interface stripped down to simple movement with the analogue stick, one button to interact and one button to use something from the inventory. There are still copious conversations to be had and numerous puzzles to be solved, but this time there’s a new twist to the proceedings.

This chapter’s central conceit is that you’re a prisoner of the goblins, each day released to clean their underground chambers, each night returning to your cell. Of course, while abroad in the Goblin’s dungeons you can visit your Daventry subjects (and good friends) and stealthily work towards your release. The problem is that your subjects are all fading fast from either illness, worry or hunger, while you have limited resources with which to keep them going. Take food, for example. Your subjects need it, but so do you; without adequate strength you can’t accomplish certain tasks or reach key areas of the Goblins’ realm. Can you keep everyone happy and healthy, or will you have to make difficult choices on the way to freedom? 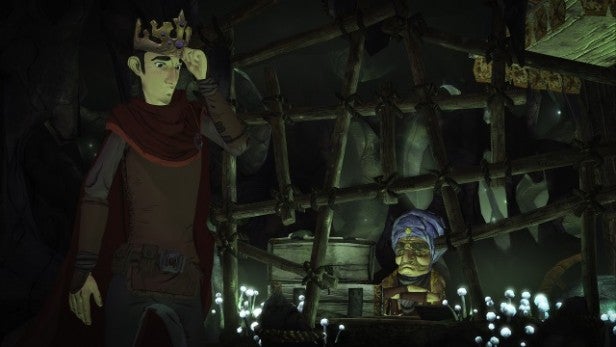 This is both Chapter 2’s biggest weakness and its greatest strength. On the one hand, the need to make hard decisions and the fact that some of your friends will suffer for them adds a tension that’s normally missing from adventure games. The outcomes matter too – in my first playthrough I missed a whole line of activities because I’d failed to keep the characters involved alive.

On the other hand, there’s no way to go back and fix an error once you’ve made it, and one of the reasons I lost those characters was because I hadn’t foreseen that another action would result in Graham getting banged up immediately in his cell. Throw in some puzzles which require you to come back the next day to complete, and there’s a level of frustration in this chapter that simple wasn’t there before.

There are other downsides to this chapter two. Set almost entirely underground, it’s a bit claustrophobic. It’s roughly two hours shorter than the five-to-seven hour chapter one, and you’ll end up revisiting the same locations over and over again. Second episode slump has been a problem for so many episodic games, ranging from Telltale’s earliest adventures to Game of Thrones and even Capcom’s Resident Evil: Revelations 2. This is just another case, right? 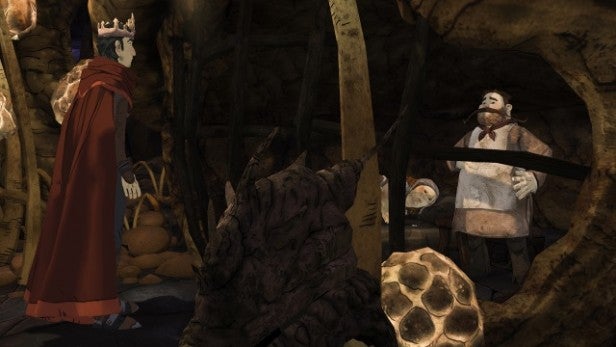 Maybe not. Rubble Without a Cause still retains all the other good points of A Knight to Remember. It’s well-written, funny, crammed with excellent voicework and in possession of some fantastic puzzles, a few of which will really leave you struggling. The goblins, who appear to have turned fairy tales into some kind of religion, make brilliant comic adversaries, and turning their obsessions against them is a real pleasure. Similarly, the characters you met in the first game are only growing more likable and interesting with time. Finding out what they need and making sure they get it always throws up some comic payoff to keep things moving merrily along.

Most importantly, this Chapter pulls off some things I didn’t expect, first tying together this story with the last one into something that’s clearly building towards a bigger tale, then tying the old King’s memories to the framing story in a surprisingly heartwarming way. For a game that doesn’t take itself too seriously, King’s Quest isn’t without points to make or things to say, and if Rubble Without a Cause can be a little pedestrian or annoying at times, it finishes on a seriously feel-good high. Don’t worry, though, this isn’t the end of Graham’s adventures, with a final cliffhanger sting to get us pumped for Chapter 3. It can’t come soon enough.

Verdict
Shorter, more repetitive and occasionally more frustrating, King’s Quest Chapter 2 isn’t quite as brilliant as Chapter 1. All the same, it’s not short on laughs, great puzzles or warm humour, and the final sequence alone makes it a chapter worth playing. If you loved the first chapter, this one keeps things moving in the right direction. If you haven’t played it, now’s a good time to catch-up and jump onboard.