Hey. Want to be in the year’s biggest movie? Great. There are a couple of juicy parts you might want to consider.


The first is a guy. He’s fallen hard for this girl. They end up stranded on this hostile, jungle island, full of giant creatures and – get this – dinosaurs. The guy ends up losing the girl; she’s kidnapped by these grumpy natives and sacrificed to some giant gorilla. So this huge, hairy ape takes her off into the jungle, and it’s up to you to save her. Capeech? 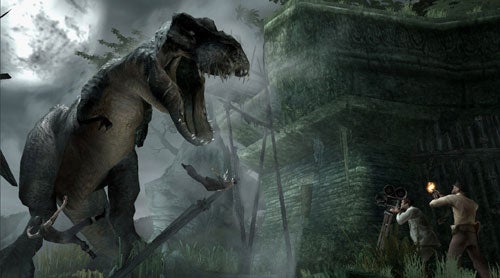 For the second role, you – you won’t believe this – play the gorilla. You’ve run off with the girl, but with all those damn dinosaurs around it’s no picnic keeping her safe from harm. You’re just trying to get her home, while mowing down everything in her path. There’s a lot of jumping, climbing, swinging and clobbering to be done but, hey, you look like an athletic type. I reckon you can handle it.


OK. I guess you want to hear more details. Well, Peter Jackson’s King Kong isn’t your average movie game. It’s not like those Harry Potter/Fantastic Four/Lord of the Rings jobs where the script strangely mutates into a scrolling beat-em-up with elements of the movie sprinkled on top like icing sugar. It’s a game that tries to put you into the heart of the King Kong experience; to stick you on Skull Island and see whether you can survive. 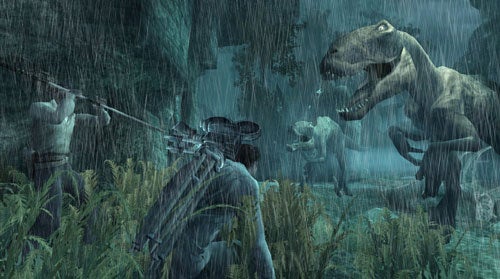 For the first third of the game, this experience puts you in the shoes of Adrian Brody’s character, Jack Driscoll. These segments seem to take the shape of a jungle-based first-person-shooter, but I actually think it’s more correct to call it a first-person-adventure. This distinction is important, not just because you’re doing more than just blasting goons with a range of enormous hand cannons, but because of the way the game makes you feel: like an average guy stuck in one of the most hostile environments imaginable, and with only some basic weaponry and your own wits to survive. Firepower really doesn’t work in many situations – the T-Rex laughs off your pitiful rifle shots, and it’s only by running and hiding that you have any chance of living through the encounter. Instead, use your smarts. Remember: Skull Island is a dino-eat-dino environment – a big one will stop to eat a small one if you drop it in its path – and that you can use man’s oldest invention – fire – to get you and your friends out of trouble. 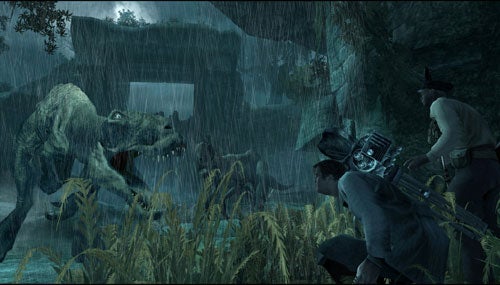 It’s the atmosphere that gets you every time. Jack’s adventures are packed with terrifying moments. One minute you’re creeping through a dank cave packed with horrid, scuttling millipedes, the next you’re scurrying from fire-pit to fire-pit through a misty valley, while raptors race in out of the fog, teeth bared. There are times when, heart pounding, you’ll be sprinting in hoarse-breathed panic for the next spear, desperate to find something you can throw at an oncoming beast. Let’s just say that King Kong has moments of tension, fear, shock and grandeur to match anything else you’ll have come across this year. I just hope you can take the stress. 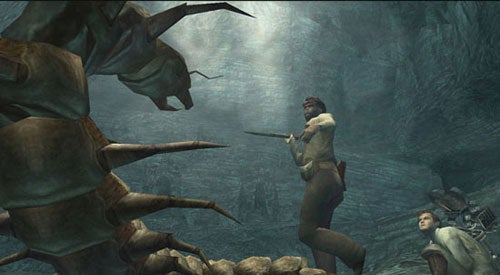 Still, you won’t be alone. The nervous chatter of your companions certainly helps maintain the tension, and your buddies are actually good in their supporting roles. When she’s not off with the ape, Ann is a big assistance, solving puzzles and spotting the route forward. Hayes is a fine shot with a rifle, and even that fanatical film-maker, Denham, has moments where he can help out. And for once, these guys actually bear some resemblance to their big screen counterparts. It’s not just that they have the right sort of look – they also behave as the parts demand. 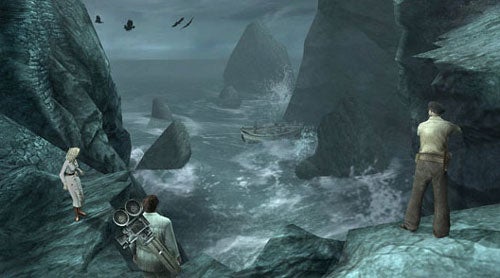 Now, you probably want to know more about your second role. Basically, it’s a combination of platform-jumping and brawling, as Kong makes his way through the jungle and swats lesser creatures out of the way. It’s a big change from the first part, and not just because there’s a change of shooting style from first-person to a roving third-person view. Kong gives you a real sense of enormous weight, momentum and physical power. There’s something wonderful about giving the spear-throwing natives and ferocious dinosaurs who gave you so much hassle as Jack what for, and there are some nice puzzle moments where it’s time to put Ann down and hope she can help you through the next barrier. Admittedly, the combat scenes are a bit clumsy, with Kong’s battles either turning into massed brawls or slightly unimaginative button-mashing slugfests, but the worst bits are over fairly quickly.

However, I ought to warn you that this isn’t the sort of movie where you can make up the script as you go along. Whether you’re playing Jack or Kong, there’s a pretty set path to take, certain actions that need to be taken in sequence, and not much you can do in terms of thinking outside the box. In fact, the Kong segments often make you feel like you’re on rails, swinging from branch to branch then leaping to the wall because there’s really nowhere else for you to go. It all comes down the experience: if you get into it, you’ll find it’s a hell of a ride. 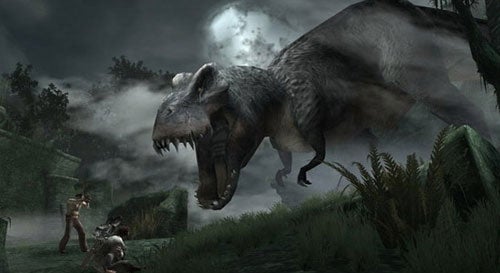 It helps that the production values are so high. No expense has been spared on the jungle locations, which are just beautiful. Skull Island is full of gloomy, water-logged caves and narrow canyons, but it’s also full of magnificent vistas, sprawling vegetation, fascinating ancient ruins and stunning waterfalls. The visual effects are excellent, and the enormous beasts are beautifully realised. The T-Rex is huge and terrifying, and while Kong himself could do with a little facial work, you can’t fault his bristling hair, his rippling muscle or superb animation. Perhaps there are times when the critters seem to have trouble navigating that gorgeous scenery, but this doesn’t really spoil the illusion. It’s also worth noting that the Xbox 360 version gives you some of the most impressive rain and weather effects I’ve ever seen. The sound and music is equally good, with a strong original soundtrack that rivals that of the movie and some blood-curdling roars from the bigger carnivores. When it all comes together – the visuals, the audio, the atomosphere, the action – King Kong has the power to take your breath away. 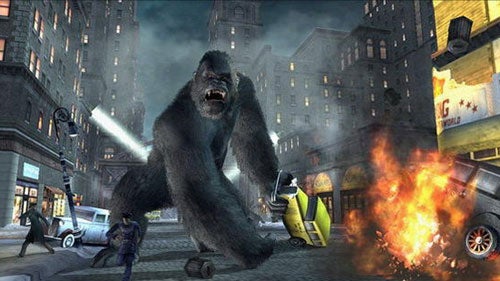 OK, so there are a few quibbles. At times the gameplay hits you with a real curveball, and you’re struggling to find the right solution (or just something you can throw and cause some damage). At least the checkpoints are sensibly placed and there are times when the game seems to adjust to match your own skills (or lack of). It’s also not a game that I can imagine coming back to once you’ve played it for the ten to fourteen hours it takes to finish. What counts, however, is that this is one big screen blockbuster that hardly ever lets you down, and that actually makes you want to rush out and see the movie. So go on, take the roles. I’ve enjoyed them, and I think you’ll feel the same.


There is a very slight, niggling sense that you’re only playing a part in a story, but if so it’s an experience to treasure. A mighty, chest-beating monster of a movie game.