We’ll be honest: some of us have been dreading the arrival of Kinect Star Wars. In theory, mixing Microsoft’s magical motion-capture tech with the wonders of the Star Wars universe should be an easy win. Seeing the game in action previously, it looked like a selection of disparate and not particularly brilliant mini-games, suffering from familiar Kinect control issues and not really living up to the Star Wars name. 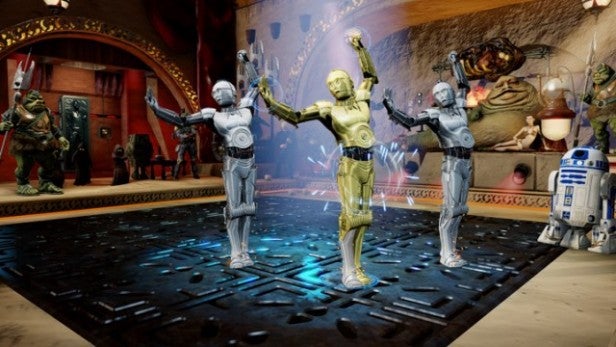 Kinect Star Wars is a pleasant surprise. It has its share of issues and, inevitably, some parts of the game work better than others. Yet, it’s a very entertaining Kinect experience, an enjoyable Star Wars experience, and generally more fun than we expected. If you take a po-faced attitude to gaming or Star Wars, and you’re looking for a deep Star Wars adventure that lets you wield the force and a lightsaber with flawless motion controls, Kinect Star Wars isn’t it. But if you’re happy with a lighter, more family-oriented title that you can trot out on a Friday night with Star Wars-loving friends and on Sunday with Clone Wars-crazy kids, then Kinect Star Wars will do very nicely.

It is, of course, a kind of games compendium, though to call them mini-games doesn’t really do them justice. C3-PO and R2D2 act as your comperes, and the premise is that you’re checking through old records in the Jedi library in the aftermath of the events of Return of the Jedi. 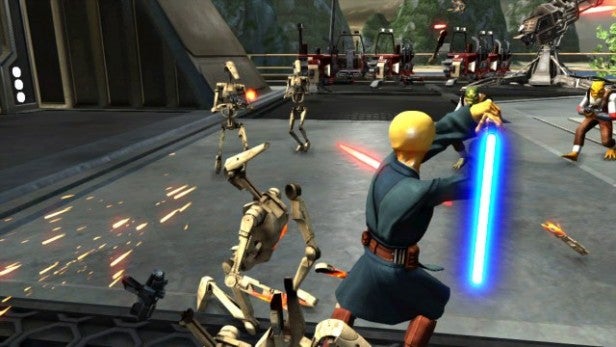 It’s an episodic adventure, alternating between scenes of lightsaber brawling, more structured duels and sections of platforming, with a handful of sequences that see you piloting a speeder-bike or attacking separatist artillery from the back of a land-speeder. It all runs on rails so you’re limited in where you can go and what you can do, but otherwise the controls work well. The right-hand wields your virtual lightsaber and your left-hand handles force powers, and a range of jumping, bending and dashing full-body gestures do the rest.

It’s a decent-looking bit of work, with nice Clone Wars-style cartoon graphics and popular characters like Yoda and Mace Windu putting in an appearance. The storytelling and presentation give it the feel of a real Star Wars adventure, and it’s not hard to see it going down well with younger players. Sadly, more experienced gamers will soon tire of the repetitive combat, while the moves to jump and dash forwards don’t always work consistently. It’s also hard to avoid the feeling that not quite enough is made of your force powers. While you’re limited in the objects you can grab from the air, lift and hurl using your force powers, raising heavy objects just as Luke does with the X-Wing in The Empire Strikes Back never gets old. 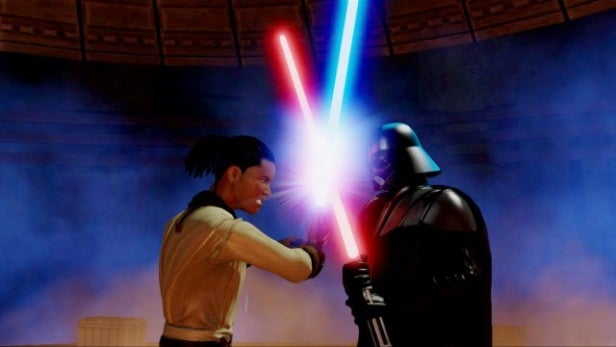 It’s in Jedi Destiny: Dark Side Rising that you’ll first come across the games duelling system, which gets a starring role in the fighting-focused Duels of Fate mode. This works reasonably well, though it’s slightly disappointing that the big hitters we all want to play – Darth Vader, for example – have to be unlocked before use. The position of your lightsaber is tracked by the movement and orientation of your hand, and the controls are surprisingly sensitive and responsive.

However, the duelling is quite rigidly structured. You basically have to parry three blows and then win a stand-off, at which point you can wail away at your opponent and try to take as much health from them as humanly possible. As a result, it all feels oddly formal, and not enough like a proper lightsaber duel. Those wanting to relive childhood dreams of playing  Luke as he takes on his dad might not have their perfect game yet.

Pod racing
After this, however, things get better in Kinect Star Wars. Pod racing still isn’t perfect – the tracks suffer rather zealously enforced out of bounds areas, and the group of racers bunches so that you’ll fall rapidly down the field if you make a mistake. However, the controls are extremely convincing, asking you to push and pull on the reins of the engine pods to control direction, and with some nice tossing and throwing gestures to put healing or blasting droids into action. 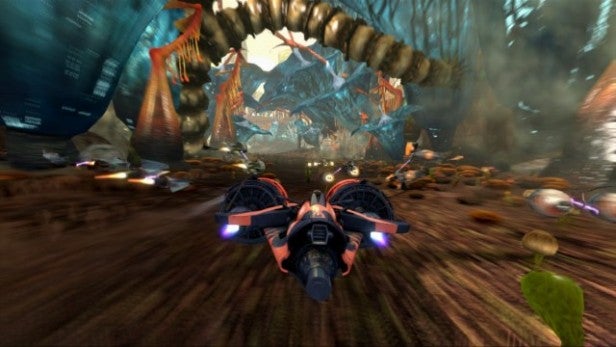 Surprisingly, Pod racing has both challenge and a certain amount of depth. Play in the normal difficulty mode and just cornering will keep you on your toes, and there’s a need to replay each track a few time and check the various alternate routes to work out which are the best. As with Jedi Destiny, the events are tied together in a story, with characters and locations familiar from Episode One.

It’s a great reminder of how spectacular Episode One’s pod-race was, with good-looking tracks pulled from around the Star Wars universe, up to 12 pod racers on-screen at  any time, and an impressive sense of speed. And wherever you are on the track there’s always something going on, whether it’s Sarlaac awakening to cause mayhem on Tatooine, or a republic vs seperatist skirmish while you’re trying to navigate Felucia’s weird jungle scenery. 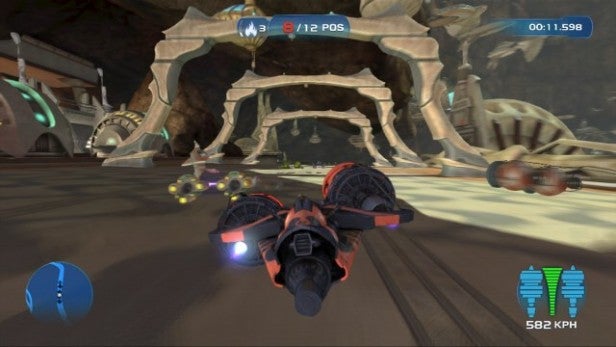 Rancour Rampage
Better still – at least for a while –  is Rancour Rampage. Here you take the role of Return of the Jedi’s infamous beastie, heading out onto the streets of Felucia or Mos Eisley, smashing buildings, eating, bashing and squashing the locals, and generally tearing the whole place up. Again the controls, which combine one-to-one tracking of your steps and arm-swings with the Rancor’s and some simple gestures to charge and jump, are sophisticated and sensitive.

What’s more, to keep things a little tactical – well, as tactical as you can be in a game called Rancor Rampage – the game constantly throws out new challenges, like picking up a bystander and throwing them so many feet, destroying a droid with a massive handclap or wrecking a building any way you choose.

Completing these tasks will earn you points, and by earning points you can level-up your Rancor. This in-turn unlocks new waves of attackers, such as speeder bikes or TIE Fighters, which try to come and see you off. By doing to them before they can do to you, you can build up some really big points. 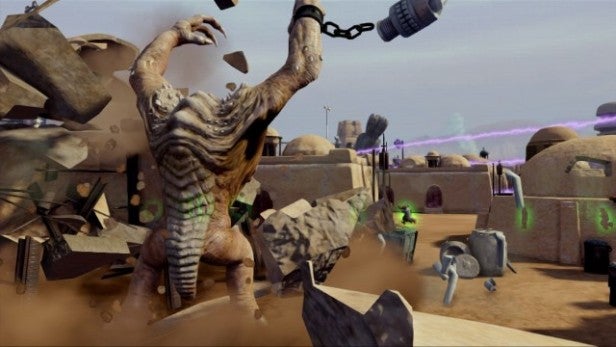 Galactic Dance Off
The final mode might be the most controversial. Galactic Dance Off is a clone of the excellent Dance Central games, but with the action moved to classic Star Wars locations such as Jabba’s Palace or the Bespin carbonite freezer. Fellow dancers become exotic aliens, or established stars like Han Solo or Princess Leia. Even the songs get reworked with Star Wars-related lyrics, so that the old Christina Aguilera hit goes from Genie in a Bottle to Princess in a Battle, with Leia urging Han to man-up and join the rebel alliance.

It’s not hard to see some Star Wars fans cringing at the sight of Han Solo grooving to ‘I’m Han Solo’ just before he hits the freezer, but those with a more open mind will realise that, actually, it’s just all quite funny. The game does a good job of recognising and evaluating your dance moves, with clear feedback on where you’re going wrong and bonus points for perfect poise and timing, and it works both as a simple dance game and as a laugh for Star Wars addicts. 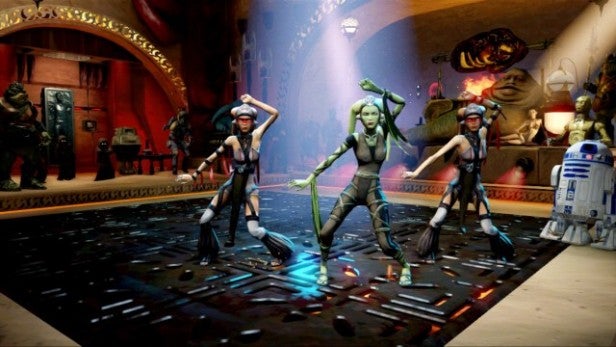 None of these games would make a full release on their own. Jedi Destiny is flawed and not varied enough, Galactic Dance Off has too few moves and music tracks, Pod racing suffers from having only six courses and Rancour Rampage from a lack of cities to, well, rampage. Yet when you put it all together, it just works.

The use of Star Wars characters and locations manages to give Kinect Star Wars atmosphere, and the game is cleverly balanced to appeal to both the thirty/fortysomething nostalgics who saw the original trilogy on first release, and the younger fans who came in with the prequel trilogy or Clone Wars. It also shows how far Microsoft has come in terms of making Kinect controls more sensitive, and more suitable for more demanding games. Most of all, Kinect Star Wars is a great game to dip in and out of, and a fine one to watch, making it a natural hit with families or groups of friends. This might not be the motion-controlled Star Wars game that so many of us think we want, but who cares? The bottom line is that Kinect Star Wars delivers a lot of Star Wars fun.

Verdict
None of the elements of Kinect Star Wars could make it on their own, but here the whole is more than the sum of its parts. Whether you’re a kid looking for your own Star Wars adventure or an adult looking to wreck things as a Rancor or get down on the Jabba’s palace dancefloor with Princess Leia, there’s plenty of fun to be had.

Next
Kinect Star Wars – Dancing on the Dark Side Review