So far, Microsoft has struggled to find anything much game-wise to justify the Kinect sensor bundled in every Xbox One. Sure, we’ve all experimented with voice control and voice search, with varying degrees of success.

True, some of us will have commanded Ryse: Son of Rome‘s Roman legions in our most stentorian tones, shouted orders at Riley in Call of Duty: Ghosts or hailed a few zombies with an ‘over here’ in Dead Rising 3. Yet have we seen anything so far that really makes Kinect seem vital, or that even ties in with the old ‘your body is the controller’ hype? Nope. So, until Harmonix finishes Fantasia: Music Evolved, it looks like it’s up to Kinect Sports Rivals to do the job.

In a way, this is Rare’s take on Nintendo’s Wii Sports Resort. Set on a sports-crazed tropical island being fought over by three warring teams, it sees you pushing for victory across six gruelling sports: wake racing (or jetski), target-shooting, climbing, soccer, tennis and bowling. 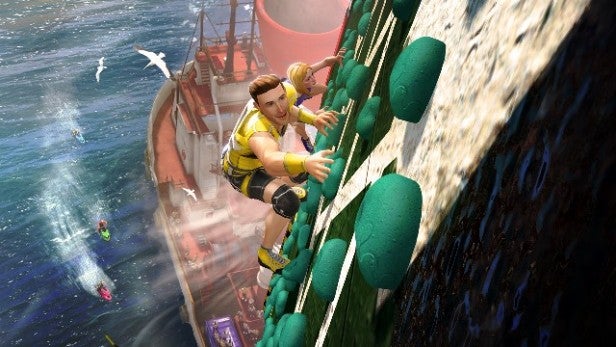 And when we say ‘you’, we mean it, because the first thing Rivals does is scan your body and then your face, combining the results with some basic information to produce a new cartoon avatar that – theoretically at least – looks just like you.

In tests with several players of differing ages the software actually does a pretty good job, capturing nose shapes, facial structure, eye-size and details like beards or glasses, and only really coming awry when it gets to hairstyles, which can easily be substituted anyway.

It’s slightly uncanny to see such an authentic version of yourself clambering up a rock-face or hitting lob shots and smashes, though it must be said that the body shapes are more flattering than realistic; whoever you are, you tend to look athletic.

After that it’s into the game. Unlike so many motion-controlled sports games, Rivals crams in a single-player career mode, where you work your way through events as a guest for all three teams, before deciding whether you fit in with the truth and honour-obsessed Eagles, the shamanistic Wolf clan or the sneaky, tech-crazed Vipers.

It’s a good way to introduce you to the different sports, with a little training in each one by a drill-sergeant Coach, and the events scale up nicely in terms of difficulty. 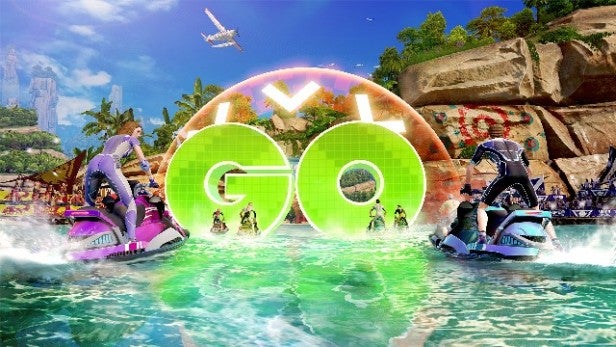 At any time you can choose to go with the next story event, or have a crack at something else, with success in one event unlocking others you can try.

In the story-based missions you’ll be competing with the other teams’ main characters, but in ad-hoc events you’ll find yourself facing other players, whose performances have been analysed and the results uploaded to the cloud.

Sign-in with another player, meanwhile, and you’ll get options for head-to-head events and multiplayer competitions. Whatever you do you’ll grow your fanbase and earn money, enabling you to unlock further costumes, sports-specific equipment and events

If Kinect Sports Rivals is anything, it’s slick. The menus look great and are easy to navigate, it features a decent selection of cracking pop, dance and rock tunes, and the whole thing looks great. By moving the action to a fantasy island, the team has been able to go wild with the settings, so you’ll wake-race around a sunset bay full of rusting ships, then find yourself climbing up one later, leaping from handhold to handhold sunk into the vertical hull.

A tennis match might take place on the top of a rock stack, while even soccer games have great backgrounds, and fireworks when you score. Throughout you’ll see gorgeous lighting, sumptuous scenic detail, and some of the nicest water and wave effects around. 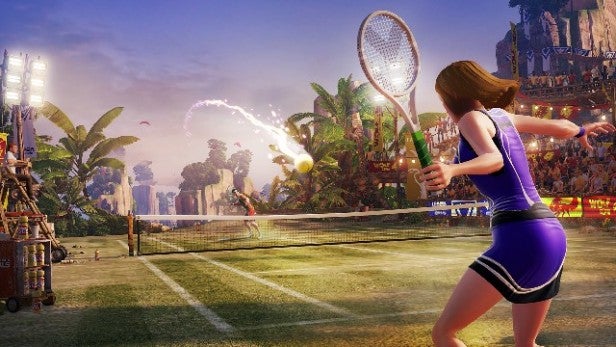 For the most part, the second-generation Kinect sensor is a vast improvement on the first, effortlessly tracking the fastest or most subtle movements when you’re steering your jetski, bowling your ball or serving and returning when you’re playing tennis.

It even tracks the movement of your fingers, so you can release the ball just like you would in real-life bowling, or break and accelerate by opening and closing your first. There’s precious little lag, and a little more flexibility. You no longer have to stand ten-feet back from your TV for Kinect to work, and you can even play some events while sitting down.

In short, this is Rare’s best Kinect Sports yet. The problem is that it’s still not consistently brilliant. Wake-racing is probably the best and deepest of the events, though there only seems to be a handful of courses with very little variation. You have a choice of power-ups and a meter you can fill by doing stunts as you get airtime from jumps and larger waves, and there’s some skill in how you race and in which route you take from gate to gate. 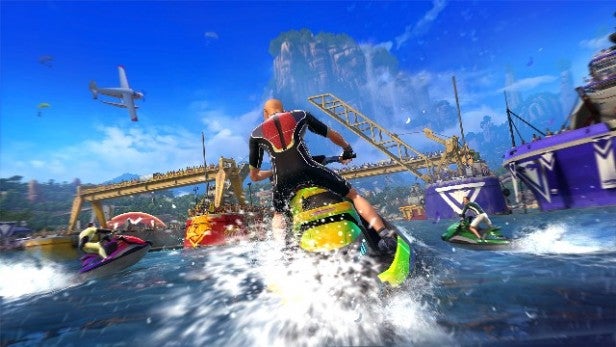 Climbing is also a lot of fun. You clamber skywards from handhold to handhold using simple reach, grab and pull motions, and occasionally jump and grab to cover larger gaps. In later events the game starts introducing hazards like wind or electrified handhelds, and there’s some tactical play in whether you take the slow but easy routes or the quick but dangerous ones. Best of all, you can grab other players and pull them from the rockface – good in solo play, great if hazardous for your health when playing against someone standing besides you.

Tennis and bowling are pretty much what you’d expect, but improved by the refinements to the Kinect sensor and the controls. The bowling is probably the best video-game version yet.

The tennis hasn’t quite got the pinpoint accuracy we’ve seen with tennis games that used the Wii MotionPlus remote, but the overall experience is not that far behind. Certainly, you can pull off a wider range of shots more reliably than you could on previous Kinect efforts. 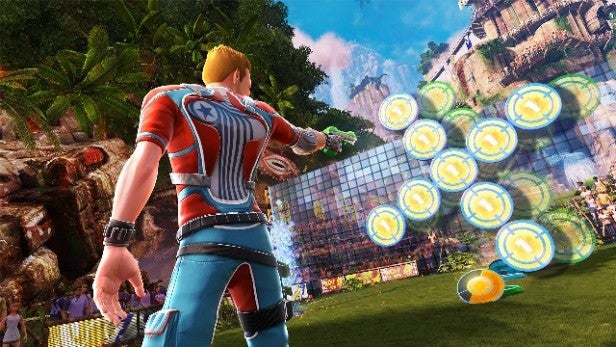 That leaves shooting and soccer. Shooting is a little odd, in that you aim by pointing your finger but don’t actually pull any trigger, but the game mixes things up with different formations of targets, different movements, and a turret attack you have to unleash or dodge. It’s hardly the richest shooting gallery, but it’s slick and entertaining.

Soccer, sadly, is a bit of a horror. You basically take it in turns with your adversary to pass a ball from player to player before doing your best to whack it into the net. The game theoretically tracks the angle and velocity of every kick, and when it does so it really does look and feel great.

Unfortunately, it struggles to do so reliably, and the real key to winning seems to be making sure you save every attempt at your goal, while hoping you’ll get lucky with at least one shot. Your mileage will vary, but our test household hated soccer. In fact, we went out of our way to avoid it unless the story mode forced us into it. 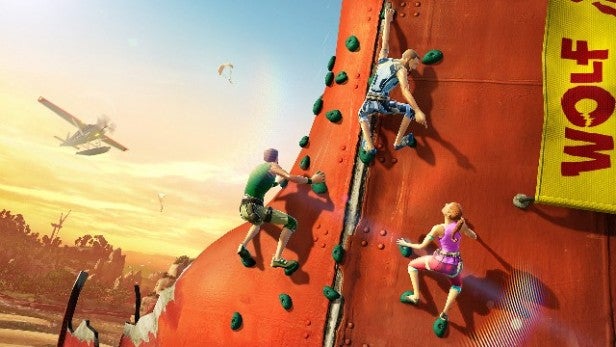 There’s still quite a lot of ‘your mileage will vary’ at play here. Kinect still seems very susceptible to changes in or a lack of lighting, and we still found occasions where it struggles to discern a player’s feet even though they’re clearly in the field of view, or fails to see your reaching-and-grabbing climbing motions for some reason or other.

Soccer needs a lot of room to work, while you’re constantly chastised for players sitting or standing too close together (you’re going to need a bigger sofa) or for not having enough lights on in the room. Play in the evening, and you might need to break out those halogen lamps that only indie film-crews and decorators use.

When everything is working, Kinect Sports Rivals can be brilliant fun. It’s great if you can play with others, and even better if you get caught up in the leaderboards, and in beating the accomplishments of your friends – there’s even a secondary Kinect Sports Rivals Hub app to track progress and compete in monthly challenges.

What’s more, Kinect Sports Rivals usually does work, and it does so more frequently and consistently than previous Kinect-powered efforts. Yet there are still elements of frustration here, and still a sense that the individual events lack real staying power. It’s a game that shows off the potential of the second-gen Kinect, without making you feel that it’s really that essential.

Kinect Sports Rivals is a good-looking, slick Kinect-powered sports game, which does a great job of showcasing the technical improvements to the sensor. Its create-your-own-avatar capabilities are impressive, the story-based single-player mode works well, and the best events are a lot of fun to play.

All the same, there are few revelations, and quite a few frustrations along the way. It’s the best Kinect Sports game yet, but it won’t silence any doubters.