We can’t run our usual suite of benchmark tests on the Kindle because they do not appear on the Appstore (more on that later). However, the Fire HDX 8.9 is powered by the impressive Qualcomm Snapdragon 800 processor running at 2.2GHz with 2GB RAM. It’s a configuration we’ve used and tested on numerous tablets and it’s a speedy one indeed. In fact it’s one of the fastest mobile processors ever made.

You can tell the processor packs a punch when using the tablet. It starts up quickly and effortlessly glides through menus and apps. While Samsung’s TouchWiz interface causes some stuttering issues on the similarly specced Galaxy Note 10.1, the Kindle Fire HDX 8.9’s Fire OS running on Android Jelly Bean doesn’t.

It’s also more than adequate if you’re interested in a spot of 3D gaming, although you may not find all your favourites Android games on the Appstore. 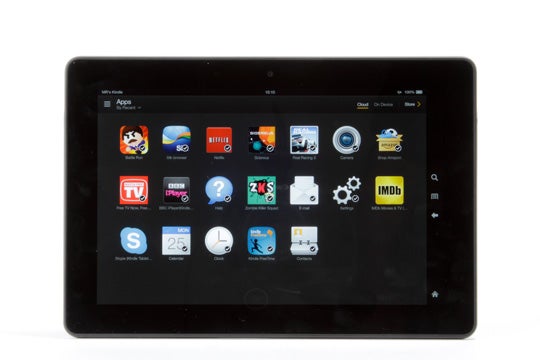 The Fire HDX 8.9 runs on Google’s Android operating system, but you’ll be hard pressed to know because it’s been heavily customised with Amazon’s latest Fire OS, called Mojito. If you’re used to an Android phone or tablet you’ll need a little time to adjust, although a few aspects are similar, such as swiping from the top to access the control panel. That being said, it’s actually easier to pick up than any other Android we’ve used and the icons are nice and big – perfect for the tablet newbie.

Turn it on for the first time and you’re prompted with a few clear actions to complete. Swiping from the right to left off the screen in landscape opens the home and settings menu. The Kindle Fire forgoes the always available back, home and settings touch-screen buttons you find on other Android devices and relies on swipe gestures instead. Initially we found ourselves forgetting and hunting these down rather than swiping, but quickly got used to the interface.

Fire OS is an operating system clearly geared towards purchasing. The main homepage navigation bar starts with ‘Shop’ and ends with ‘Offers’. Amazon wants you to get busy buying the huge range of products it sells and, if you shop there regularly, that’s not necessarily a bad thing. You do also get access to some exclusive offers and vouchers and £4 worth of app credits to get you started. 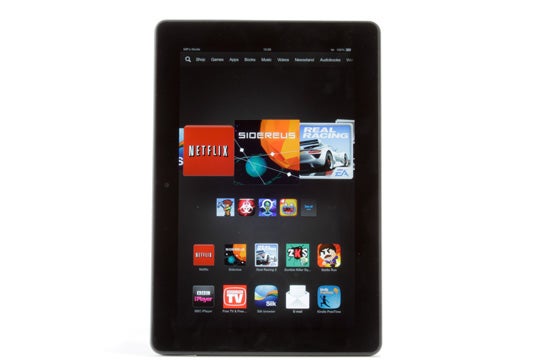 We’ve hinted at it a few times already, but where Amazon’s attempt to control your tablet experience really gets constrictive is with the Appstore. There’s no access to the plethora of Google Play apps of varying quality. Instead you have apps that Amazon has cherry-picked to allow on the store – just like Apple does with its app store. Unfortunately, that’s where the similarities between the Kindle Fire HDX 8.9 and iPad apps end.

There are just not enough of them, and those that do exist across both platforms cost more on the Kindle Appstore than they do on the Google counterpart. It’s particularly noticeable with some of the better on-demand video streaming apps. BBC iPlayer is available, but there’s no ITVplayer, 4oD or Demand 5. If you’re an Android phone owner you’ll also be disappointed that you can’t use your purchased apps on the tablet. You have to start, and pay, all over again.

Widgets are also conspicuous in their absence. This means you lose out on one the most attractive reasons to pick Android over iOS.

A version of restricted profiles, which first made an appearance in Android 4.3, called Kindle Freetime lets you set up multiple children with access to only your chosen apps, movies and books and time limits for use. A PIN stops children exiting Freetime and we were pleased to note that it is required even when restarting. It’s a well thought out family app and our only gripe was that opening apps and navigating was a lot slower than usual.

If you want to access the web you’ll have to use Amazon’s Silk browser. Want Chrome instead? Forget it. None of the usual browser alternatives appear in the Kindle Appstore. 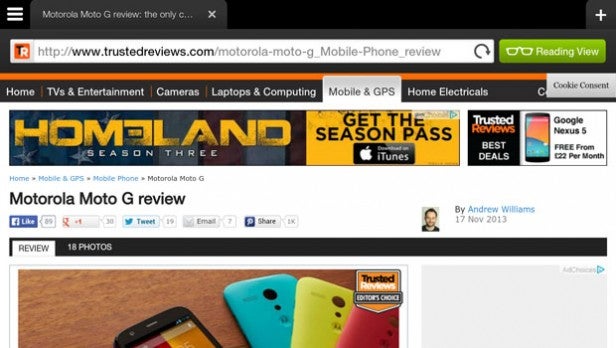 Silk has had a major overhaul recently, but it’s still not as slick as its competitors. For example, you can open multiple tabs but every time you move from one to another and back again the page reloads – it’s more of a bookmark than a browser tab. Amazon may have done this to reduce the processor load but it is irritating, even more so because we don’t have the option of using another browser that suited our needs better.

So Fire OS is easier to use, but in many ways more limited than Android. It’s clearly geared more towards the less technically savvy, a fact underlined by the inclusion of the Amazon exclusive Mayday app.

Mayday lets you connect to a real person who can help you with any Kindle Fire HDX 8.9 related issue you may have. It works better than we could have hoped. 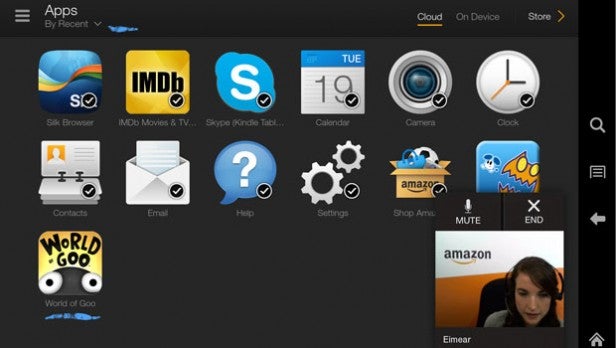 Start a session and, like a little Christmas elf, a thumbnail video of your personal guru appears. Our helper answered within a few seconds and helped us fix an issue with offers not being displayed. It was quick, pleasant and effective with clear on-screen prompts helping us get to the bottom of things within a couple of minutes. How the service will cope on Christmas day we can’t yet tell, but even late on a Sunday evening we were promptly given service and similar tests while reviewing the Kindle Fire HDX 7 were just as encouraging.

Mayday is a fantastic customer service app and a godsend for the tired family IT guy, who invariably ends up having to fix every little software issue anyone has with their computer or laptop.